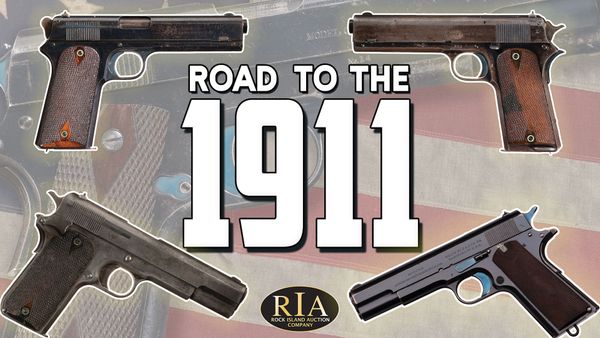 The famous 1911 pistol is one of the most popular handguns of all time. When it comes to factors like balance, comfort, and reliability, John Browning’s 1911 design has no shortage of admirers. The legendary pistol was eventually adopted by the U.S. Army and went on to become the longest-serving sidearm in American military history, but the 1911’s road to success as a military handgun included numerous early models and experimentation as Browning raced to develop a pistol that would standout against a slew of competitors.

The U.S. Military’s search for a reliable semi-automatic sidearm was a primary driver in the development of John Moses Browning’s .45-caliber pistol. Many of the evolutionary predecessors to the Colt 1911 are rare guns today, with especially scarce examples like the Colt Model 1910 prototype trials pistol considered gun collecting treasures. The Colt 1910 was a significant milestone in the progression of the 1911 design, but the real story begins over a decade earlier.

The 1911 pistol’s military lineage started in 1898 with Browning’s Colt Automatic Pistol, a gun that would become known as the first production Colt Model 1900. Chambered in .38 Auto, this early Browning design was a locked breech, short recoil operated handgun that was sent to the U.S. Ordnance Department to test the feasibility of an automatic pistol in the hands of army officers.

Officers stationed in the Philippines had a high demand for automatic pistols, and after initial field testing the Ordnance Department requested a number of design changes and ordered 200 more Colt Model 1900 pistols. These U.S. Army Second Contract models only incorporated two of the recommended improvements, including checkered, thicker grips, and deeper slide serrations that were moved to the front of the pistol.

Reports from the field were mixed, and some of those complaints are reflected in how the Model 1900’s frame differs from its famous successor. A shorter, deeper grip, no slide stop, a muzzle heavy design, and one of the early Browning pistol’s most famous features, its rear sight safety. Having a rear sight that doubled as a safety by blocking the firing pin wasn’t popular with the troops, as both the sight and firing pin tended to wear and made the weapon both unsafe and inaccurate.

The next Browning pistol in the line of historic precursors to the 1911, the Colt 1902, addressed a number of military complaints and included a lengthened grip, a slide stop, and an increased magazine capacity from seven to eight, though the pistol was still chambered in .38 ACP (which stands for Automatic Colt Pistol). Again, the feedback from the field trials was mixed, questioning the durability of the pistol compared to well-known and comparatively reliable alternatives like the New Army Colt 1892 revolver.

The Thompson-LaGarde field tests of 1904 were conducted to determine which caliber the U.S. Military should adopt going forward. The tests were in part initiated by the poor performance of the Army’s .38 caliber revolvers during the Philippine Insurrection, and Colonel John T. Thompson concluded that nothing short of .45-caliber stopping power was suitable for dealing with a determined opponent like the Moro juramentado warriors during the Moro Rebellion.

In January 1906, U.S. Army Ordnance Chief B.G. Crozier issued a letter of invitation to the gun manufacturing industry to develop and submit new semi-automatic handguns utilizing the then new .45 ACP rounds. Lured by the promise of a rich military contract, eighteen companies initially responded, though only six were able to produce a test sample pistol. Three of those designs were eliminated early, with Colt, Savage, and DWM remaining as the sole survivors.

During the next testing phase, DWM would voluntarily withdraw its U.S. Trials .45 ACP Luger pistol design due to concerns that the Americans wouldn’t pick a European offering regardless of virtue. The Savage Arms Corporation produced a version of its Model 1907 automatic pistol that was scaled up for .45 ACP and faced off against Colt during the next round of military testing.

In 1904, Colt and Browning had been working on a .41 caliber cartridge. The following year, Browning’s pistol design was beefed up and modified to chamber the larger .45 ACP round to accommodate the military’s request. Enter the “Military Model of 1905”.

With an external extractor and a larger grip to house the new cartridge, the Colt 1905 was an important evolutionary leap in the development of the Model 1911. Browning had also reduced the number of parts and simplified the internals, a trend toward efficiency that would continue in later iterations of the handgun.

The Model 1905, while a step in the right direction, proved too fragile to stand up to the recoil forces of the .45 ACP rounds and the rigors of military torture testing. So while the Colt 1905 wasn’t the final answer that the military was searching for, it helped set the stage for the sturdier 1907.

Browning continued to refine his design with the Colt Model 1907, a beefed-up 1905 with a grip safety. This pistol was manufactured under the Army Contract of 1907 for field trials in the same year. While a notable upgrade, the Colt 1907 still proved unsuitable for the .45 ACP round during rigorous field evaluations.

In June 1909, Colt submitted a letter to the Chief of Ordnance requesting to withdraw all of their test samples, agreeing to modify them to correct the design flaws and return them to the Army for further evaluations. While much of the groundwork had been laid for what would become the iconic 1911, Browning realized an extensive redesign was needed to accommodate the power of the new military cartridge.

John Browning would continue to refine his pistol with the Colt Model 1909, which replaced the two link barrel lock up design with a single link, tilting barrel system for greater reliability. The 1909 also made improvements to the recently added grip safety, the ejector and ejector port, a new placement for the magazine release, and the weapon’s overall ease of disassembly was also fine-tuned. Browning’s pistol was drawing closer to its final form, but the next prototype design was perhaps the most important evolutionary piece in the Model 1911’s legacy.

Originally manufactured in 1910, there were possibly as few as eight Model 1910 prototype pistols ever produced. Browning made further refinements to the componentry, while other design changes are more outwardly apparent, like the slanted grip, square ejector, angled butt, and most examples included thumb safeties. The Colt Model 1910 is a highly polished prototype that feels just a few tweaks away from its famous successor, and Browning’s genius is evident throughout. In classic Browning fashion, all but one of the 1910 pistol’s modifications involved components that were interchangeable with parts from earlier designs, making the rapid improvements possible.

The Colt 1910 was the final prototype in what would become the famous 1911 pistol. Provenance: The Dr. Robert Azar Collection.

In November of 1910, the Ordnance Board met to pit the Colt and Savage pistols against each other for the second to last time. Each gun was fired 6,000 times in a grueling test, and while both pistols had breakage issues, the Colt Model 1910 emerged as the clear favorite. Still, the military pressed for further refinements, and those subsequent modifications lead to the development of the renowned U.S. Army Model 1911, a design approved on March 19th of 1911.

One of the issues discovered when testing the Colt 1910 trial pistols was that their grip screws continually loosened when subjected to sustained fire. In the case of the extraordinarily rare 1910 prototype available in Rock Island Auction Company’s September Premier Firearms Auction, Browning’s solution was to switch out the typical grips with a permanently fixed grip design that used studs on the frame and slots in the grips rather than screws for retainment.

The Colt 1910 is one of the top-tier offerings in Rock Island Auction Company’s September gun auction.

Browning filed a patent for his fixed grip concept that went on to be approved by the U.S. in 1913. The idea of permanent grips, while consistent with John Browning’s tendency for streamlined engineering and minimizing the number of parts in his guns, never appears in any of the Browning 1911 pistol designs that followed, making the Colt M1910 serial number 3 a true rarity among rarities and possibly a one of a kind pistol.

The Colt Model 1910 serial number 3 looks every part the direct predecessor to the revered Model 1911. Retaining 85% of its original high polish blue finish, this mechanically excellent prototype is still in exceptionally fine condition. Already one of only twelve or fewer produced, this Model 1910 prototype with the unique fixed grip and lack of a thumb safety would become the centerpiece of even the most extensive Colt semi-automatic pistol or U.S. military handgun collections.

Colt Model 1910, a scarce and important piece of the 1911 pistol’s development.

On May 5, 1911 Browning’s pistol was officially accepted as the “Automatic Pistol, Calibre .45, Model of 1911.” Following its adoption by the Army, the Model 1911 was also selected by the Navy and the Marines. The 1911 had truly arrived, and the storied pistol would soon go on to serve thousands of GIs in World War I and beyond.

Browning’s 45-caliber semi-automatic pistol set a new design standard for American military sidearms. Only the first 51 of these iconic pistols were produced in the year for which they were named, making a “true” Model of 1911, like the Two Digit Serial Number 14 example offered in September’s Premier Auction, another headline-worthy gun.

In service, the 1911 pistol earned a reputation as a rugged, reliable sidearm that was comparatively easy to maintain. Other manufacturers were eventually granted contracts to meet the growing demand, and nearly two million 1911 pistols were produced during the Second World War. The 1911 served for 70 years as the standard American Military sidearm. Despite its eventual replacement by the Beretta M9, the 1911 pistol is still carried by numerous officers to this day.

Buying and Selling a 1911 Pistol

The 1911 genre is more popular than ever today. Browning’s landmark design continues to be produced by dozens of manufactures across the globe, with pistols like the Kimber 1911, the Sig Sauer 1911, and the Ruger 1911 a consistent hit with shooters and collectors during Rock Island Auction Company’s Arms & Accessories Day auctions. Classic 1911 pistols are prominently featured during Premier auctions and Sporting & Collector auctions, with demand for historic collector pieces continuing to grow.

Rock Island Auction Company’s September Premier Firearms Auction is a celebration of legends in the field of fine arms collecting. Dr. Robert Azar and Gus Cargile are among the headline names, both exquisite collections of historic military arms that includes many of the 1911 pistols featured here, as well as countless additional examples of historic and desirable pistols from across the generations. We’ve only just scratched the surface of the treasures offered this September, so dive into our online catalog, place your bids, and get ready for this fall’s biggest event in firearms collecting.

[Goddard, William H. D.] The Government Models: The Development of the Colt Model of 1911