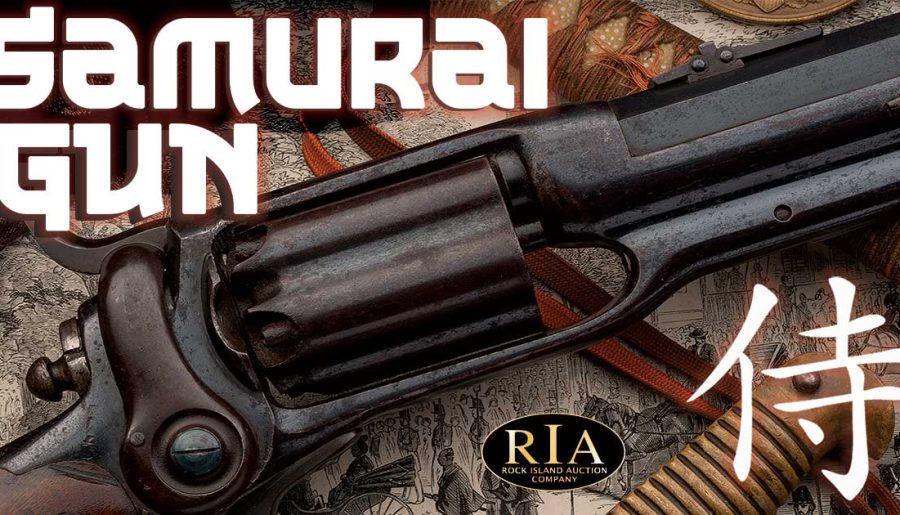 Perhaps no gift is more American than a fine firearm, and Samuel Colt presented one of the most desirable guns available to Muragaki Norimasa, the Vice Ambassador of the first Japanese embassy to the United States in 1860. 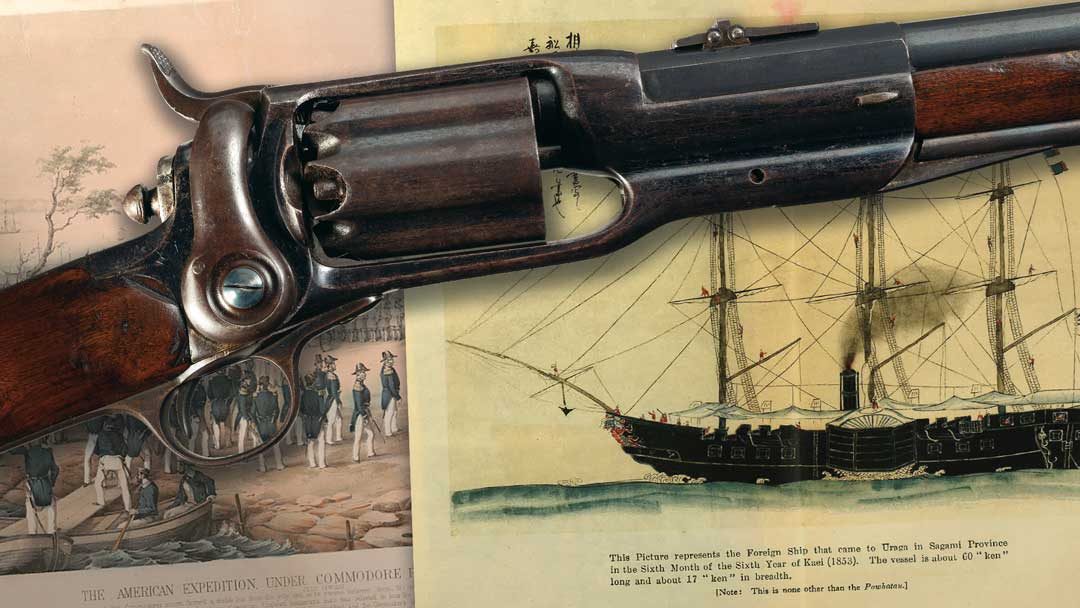 Representing the feudal Tokugawa Shogunate government of Japan, Muragaki Norimasa’s delegation was not only the first group of Japanese to visit America, but also the first Japanese embassy dispatched to any Western country in more than two centuries. The Colt New Model 1855 military revolving rifle inscribed to Muragaki Norimasa is an immensely historic firearm that represented a first exchange of technology, culture, and philosophy between two nations on opposite ends of the globe at a time when the world was growing ever more connected.

Commodore Perry and the Black Ships

In 1630, Japan’s Tokugawa Shogunate government closed the country to the West except for a small Dutch outpost in the port of Nagasaki. For the next 223 years, Japan remained isolated from the world and all its innovations, including evolving gun technology. Japan’s seclusion was shattered in 1853 when U.S. Navy Commodore Matthew C. Perry rolled into Tokyo Bay with a force of steam-powered battleships, fired a cannon volley, and demanded the nation open its doors to American trade.

Nearly seven years later, three samurai ambassadors and their entourage were chosen to deliver a Treaty of Amity and Commerce to President James Buchanan. Traveling to Hawaii, then San Francisco, then crossing Panama by rail and sailing to New York, the samurai envoys recorded their experiences in vivid detail. Muragaki Norimasa was particularly impressed by the advanced arms of Industrial-age America, and Japanese gun production took great inspiration from Western manufacturers like Colt in the decades to follow. 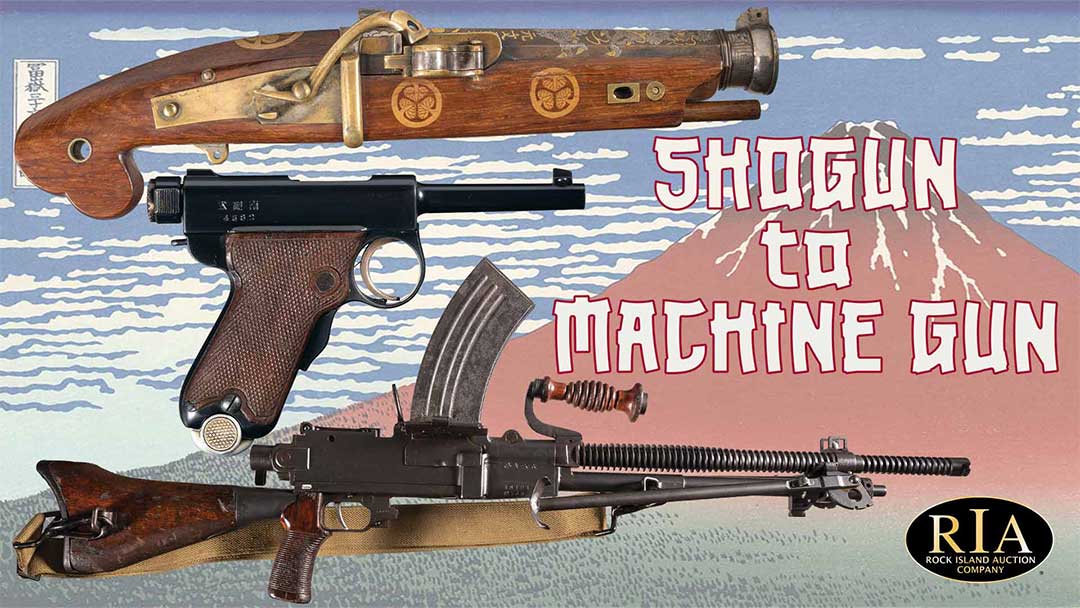 After Commodore Perry’s arrival, Japan scrambled to catch up to the West in firearms design. Subscribe to RIAC’s weekly newsletter to receive fascinating stories like this retrospective on Japanese guns.

This new relationship between Japan and the United States was also a remarkable business opportunity for enterprising Americans such as Samuel Colt, who presented an engraved Colt Model 1855 revolving rifle to the samurai delegation with an eye toward procuring a Japanese military contract. Offering the finest custom revolvers to celebrities, dignitaries, and war heroes had proven an effective marketing tool for Colt in America, and it was a strategy he hoped would pay off in foreign markets as well. 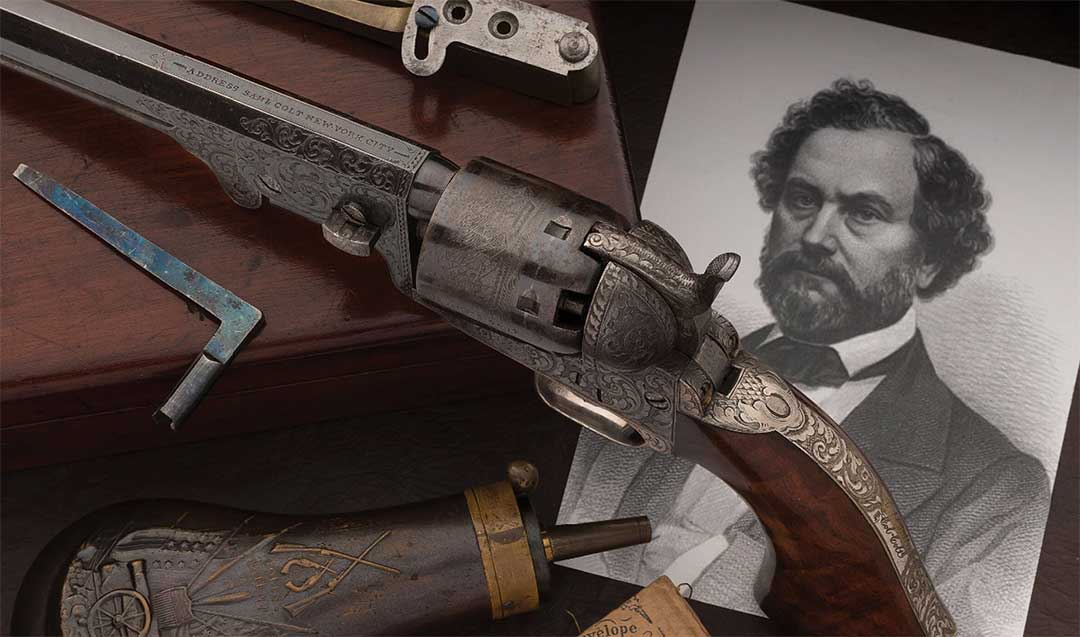 Samuel Colt’s efforts to expand his business internationally were well known. In the 1850s, Colt went to great lengths to display his guns at various European World’s fairs and exhibitions, placed stories featuring his revolvers in various magazines, and opened an ill-fated factory in London. Though the Japanese military only purchased a limited number of Colt guns, they became enormously popular with the civilian market. 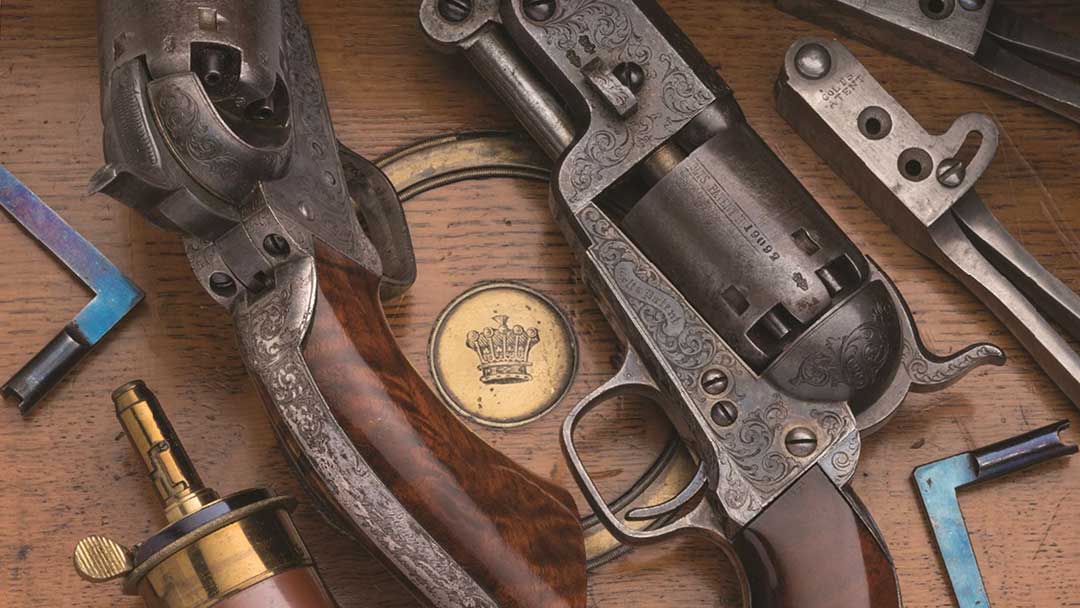 The arrival of the three samurai ambassadors and their 74-man entourage was a major event in the United States. Congress had provided a lofty $50,000 budget to host the historic embassy, and these funds ensured that an endless succession of parades, parties, and lavish tours would greet the Japanese envoys at every stop. The samurai kept careful records of their visit, noting the stark differences in culture, customs, and technology between Japan and America. 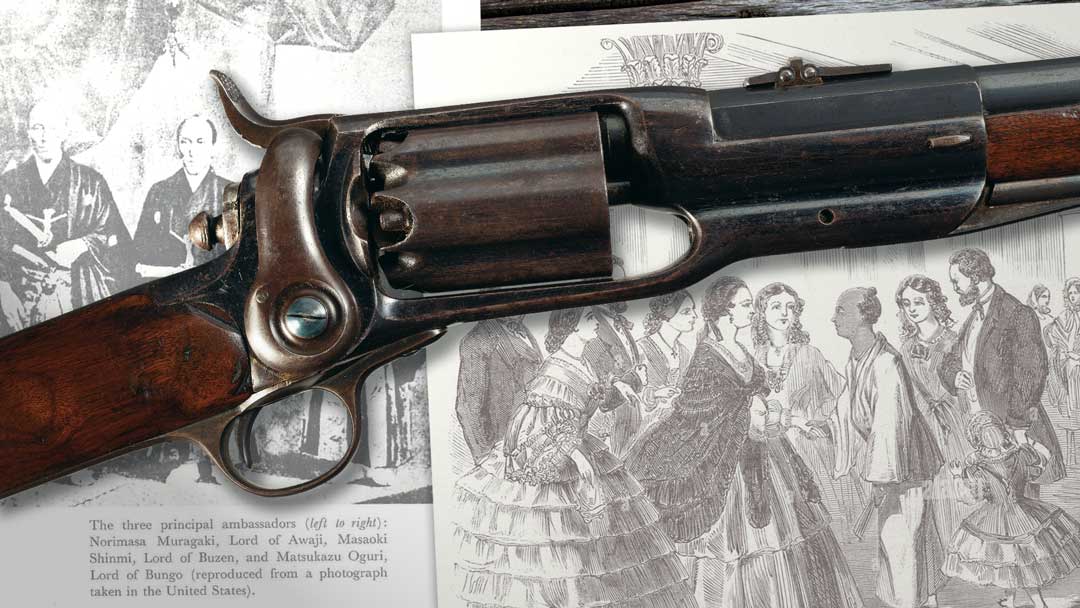 This historic Samuel Colt presentation revolving rifle is pictured on page 196 of “The Book of Colt Firearms” by R.L. Wilson.”

Thousands of spectators appeared to cheer on the samurai delegation, including an onslaught of press coverage that included aggressive attempts to photograph the reluctant ambassadors. Muragaki Norimasa was taken aback by the brash American hospitality and repulsed by the “lack of distinction between high and low,” though the stoic samurai was impressed by American architecture and the steam-powered engines that carried the Japanese embassy by sea and by rail.

For their part, the American media was fascinated by the kimono garments, top-knot hairstyles, and the formal manner of the samurai ambassadors. And most notable of all was the presence of their prominent samurai swords, which famed poet Walt Whitman was quick to include in the poem he penned to honor the Japanese envoys. 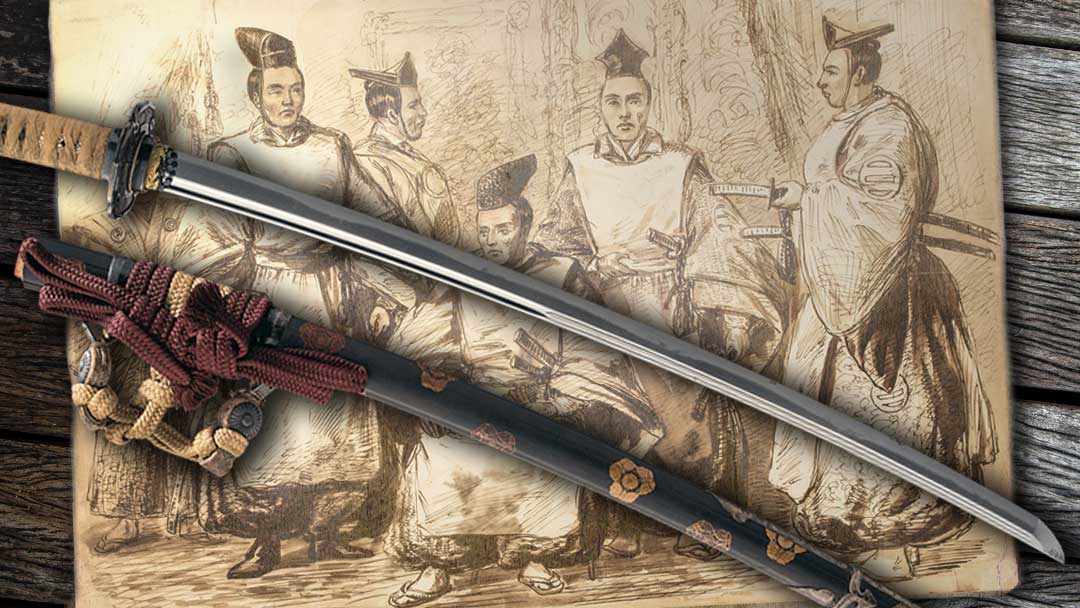 The American public was fascinated by the samurai swords carried by Muragaki Norimasa and his companions. Numerous Japanese swords can be found in Rock Island Auction Company’s May Premier catalog.

Over the western sea, hither from Niphon come,
Courteous, the swart-cheek’d two-sworded envoys,
Leaning back in their open barouches, bare-headed, impassive,
Ride today through Manhattan.
–    Walt Whitman, ‘A Broadway Pageant’

In May 1860, the samurai ambassadors arrived in Washington D.C. to tremendous fanfare. Between reviewing troops, touring the American capital, and meeting with countless senators, cabinet members, and dignitaries, the Japanese envoys found time to attend a session of Congress. Muragaki Norimasa remarked that the chaotic and theatrical debates he observed within the U.S. Capital Building “resembled somewhat that of our fish market at Nihonbashi.” 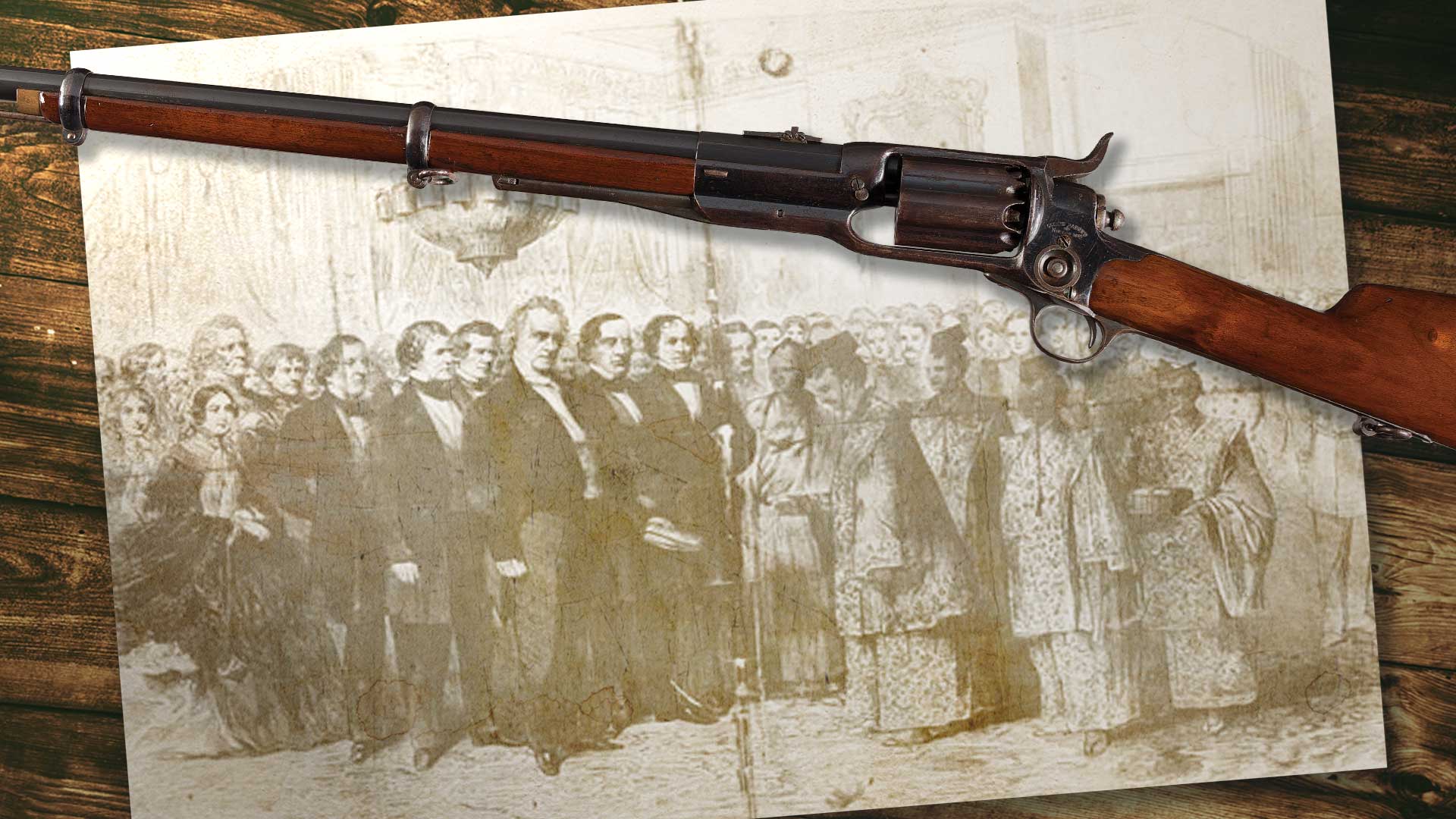 President James Buchannan received the Japanese delegation in the East Room of the White House, where the Treaty of Amity and Commerce to the United States, an agreement seven years in the making, was finally officially ratified. 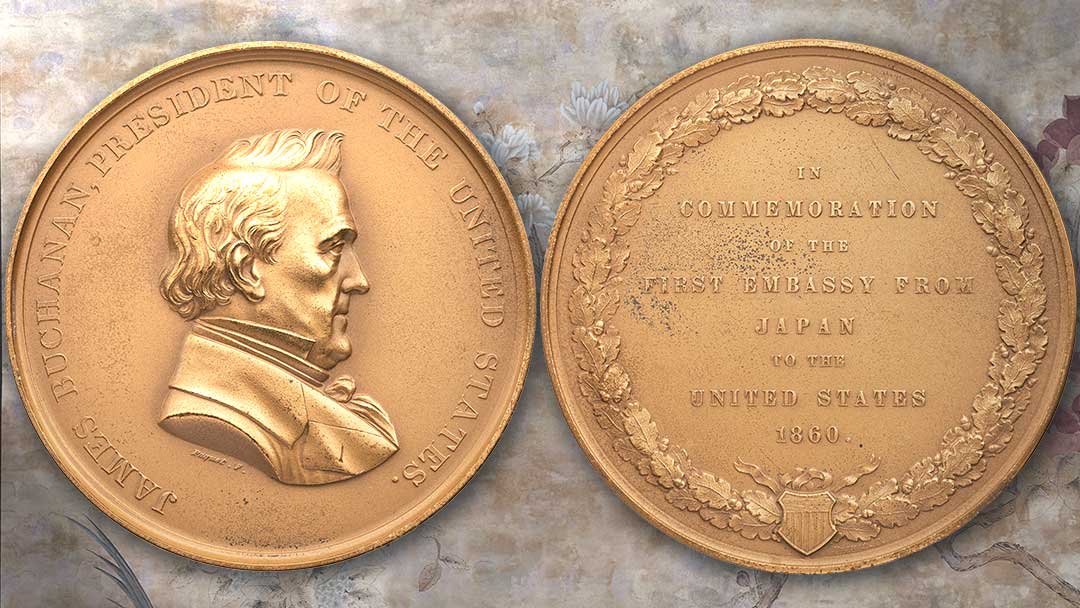 One of the medals gifted to the samurai envoys by President James Buchanan.

Despite being shocked that the American president was “dressed exactly like a merchant”, Muragaki Norimasa fondly remembered James Buchanan as “a silver-haired man” with “a most genial manner without losing noble dignity.” When the samurai delegation made a final call on President Buchanan on June 5, he presented them with several medals specially struck to commemorate the visit. 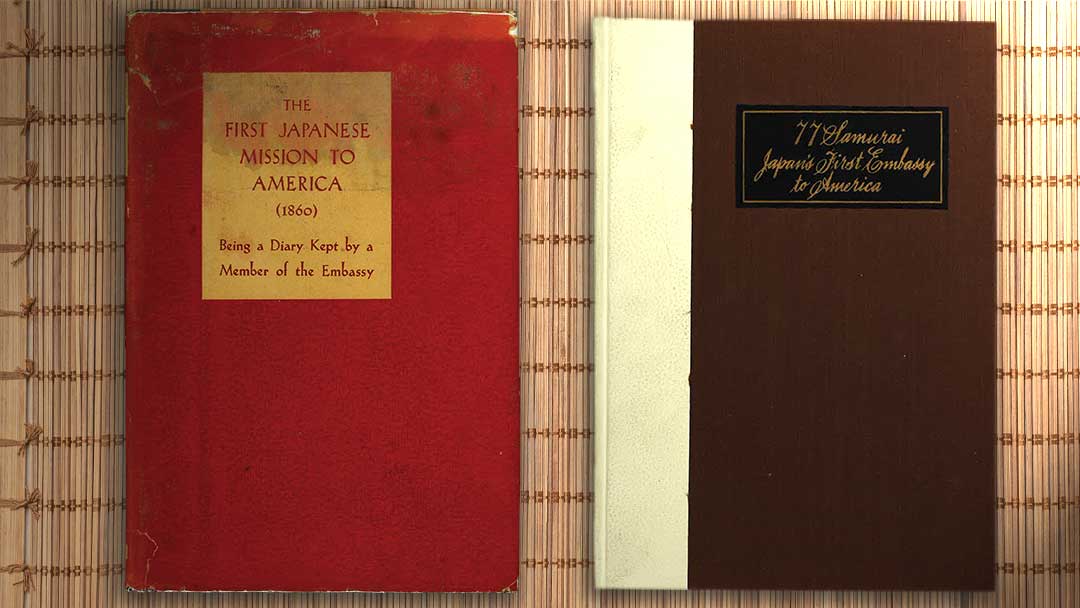 Muragaki Norimasa kept a detailed diary which was subsequently published and translated noting the details of their travels to America, their time in the U.S., and their return trip.

Ever since our arrival at the American capital we have frequently been asked by photographers to allow our photographs to be taken, but we have hitherto refused, as it is not the custom in our country. Today, however, we had to submit, in deference to the President’s wishes.                           –    Muragaki Norimasa, June 4, 1860

After departing Washington, the samurai ambassadors toured Baltimore, Philadelphia, and finally New York City. While they did not travel to Hartford, Connecticut, the Japanese envoys were shown numerous American firearms that were significantly more advanced than the matchlock guns the samurai had been using for more than two centuries prior to Commodore Perry’s arrival. 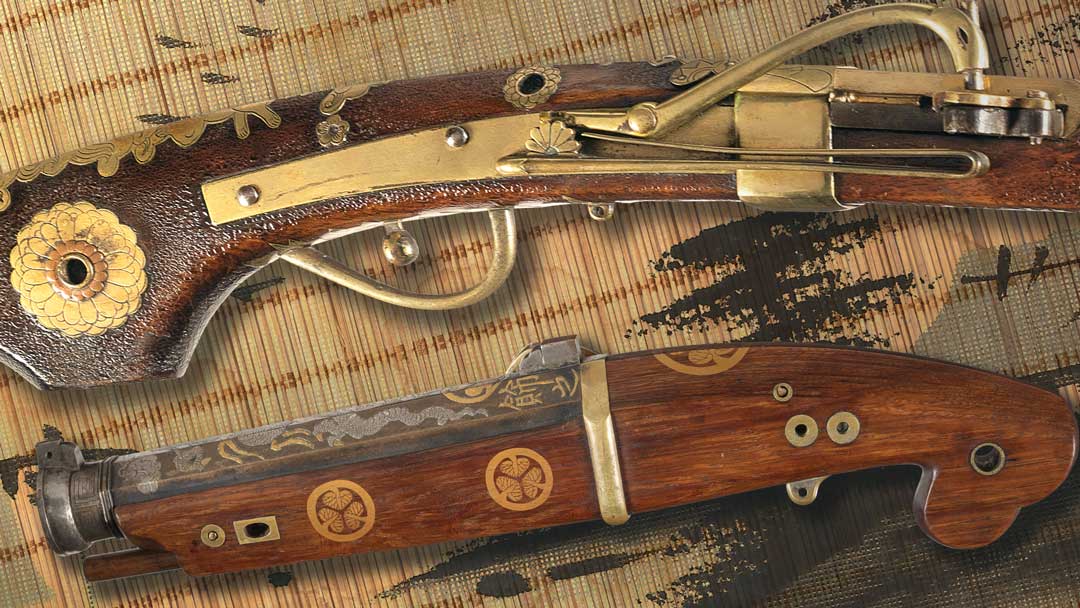 For over two centuries, the Japanese had been limited to matchlock firearms like lot 1263 and 1264 from May’s auction.

The Colt New Model 1855 revolving percussion rifle may have been presented to Muragaki Norimasa through Colt’s New York office or one of the navy yards the samurai delegation visited. For example, Muragaki mentioned that the commandant of the Navy Yard showed the samurai various American guns and “demonstrated in the making of a six-chambered gun or pistol” which “greatly impressed us.” 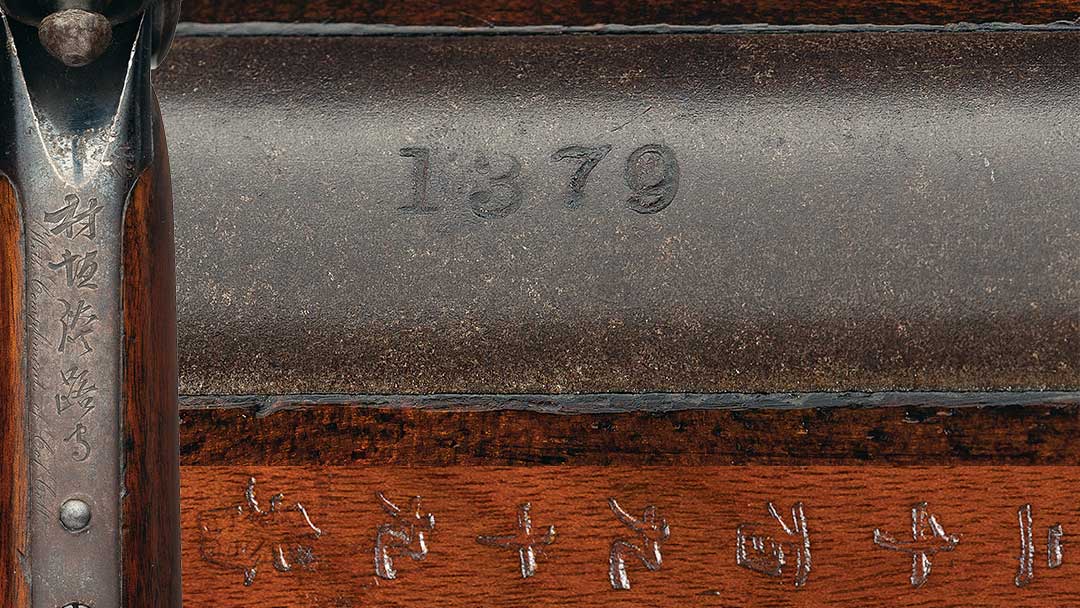 The inscription on the upper tang is noted as reading “MURAGAKI AWAJI-no-KAMI NORIMASA/With Compliments of Col. Colt”

In addition to presenting a revolving rifle to Muragaki Norimasa, Samuel Colt ensured that the samurai delegation would return home to Japan with a selection of Colt firearms. Among the guns presented to the samurai were two Colt carbines and two Colt revolvers, as well as 100 sets of revolver spare parts and 59 sets of carbine spare parts. Most of these items would have been transferred to Japan’s shogunate government. 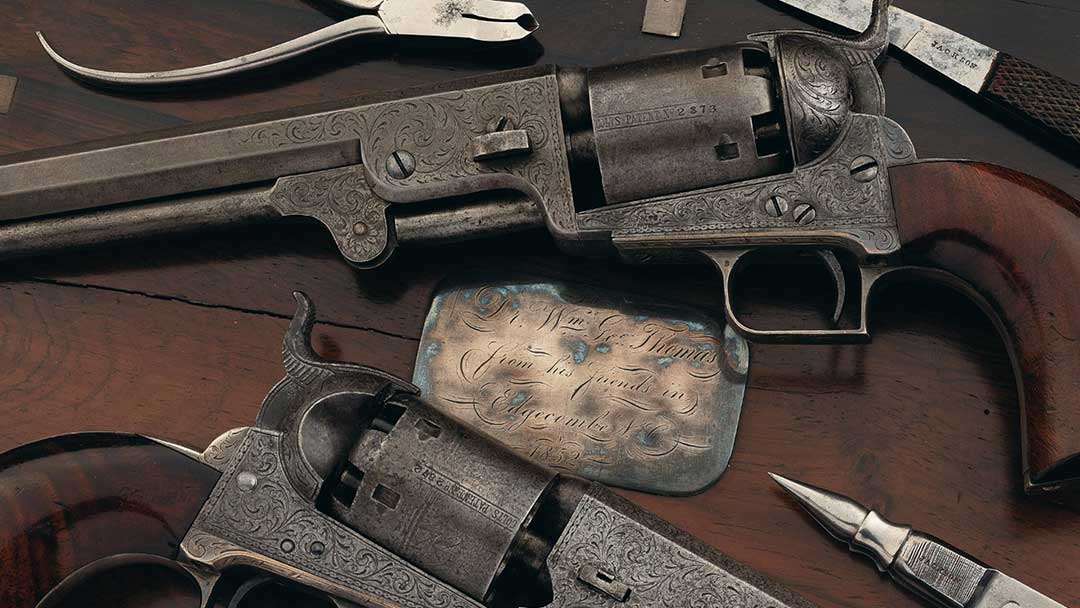 The Japanese were already familiar with the Colt Mode 1851 Navy, a popular revolver of the era, like Lot 153, one of the finest examples in May’s auction.

In 1860, the Colt Model 1855 military pattern revolving rifle would have been one of the most advanced guns in production and one of the few repeating rifles of the Civil War era. The samurai were impressed by Colt’s guns for a reason, as the introduction of the revolver was a substantial leap forward compared to Japan’s dated arms technology. 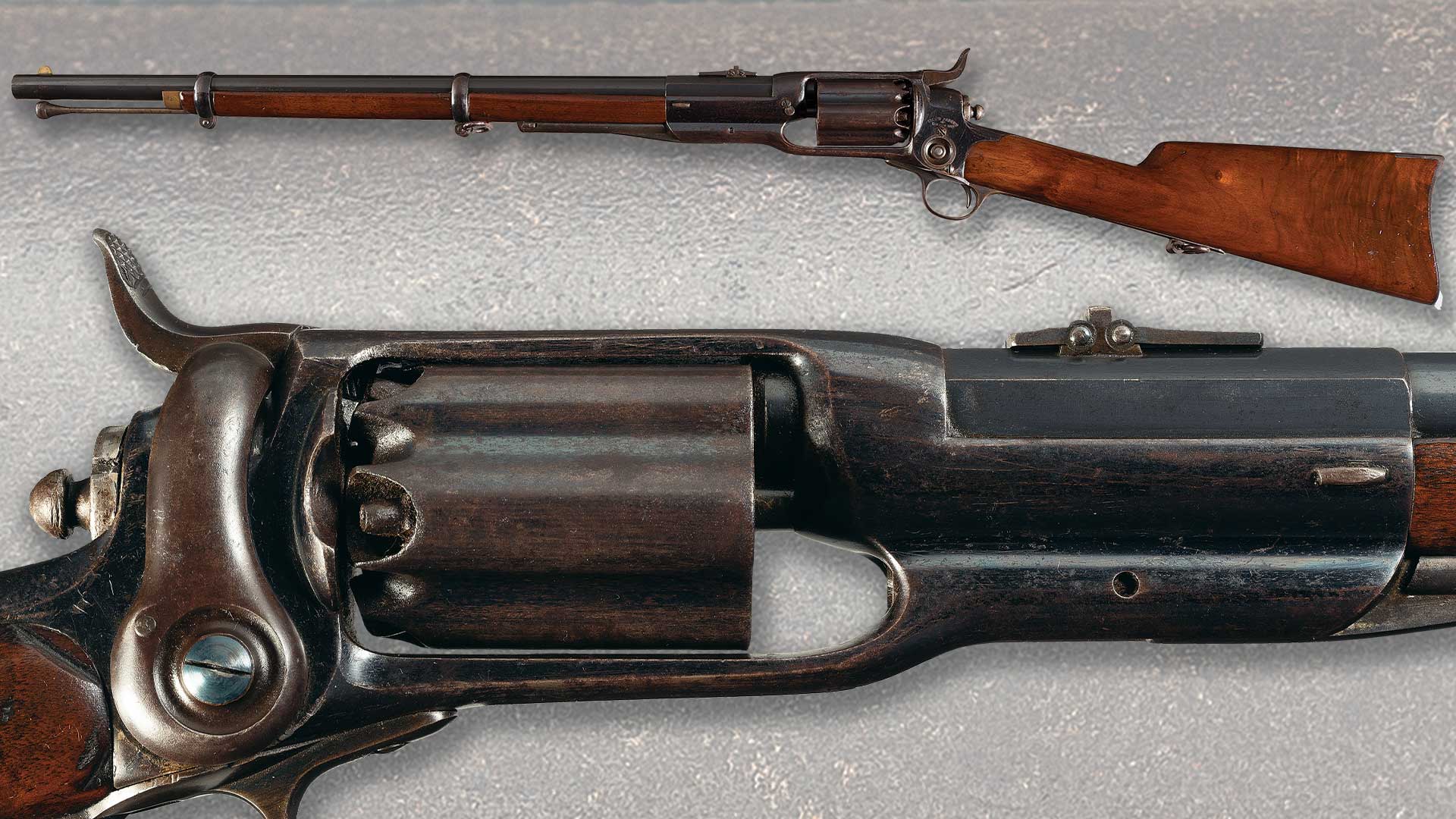 The Japanese characters on the right side of the rifle’s buttstock have been translated in an included document from the Historiographical Institute at the University of Tokyo as meaning “Jin-Shin [Meiji year 5]/Ni-Sen-Hyaku-Ku-Ju-Ku [series No. 2199]/Myo-To-Ken.” The markings indicate the gun was in the possession of the Kōchi Prefecture in Eastern Shikoku in 1872. 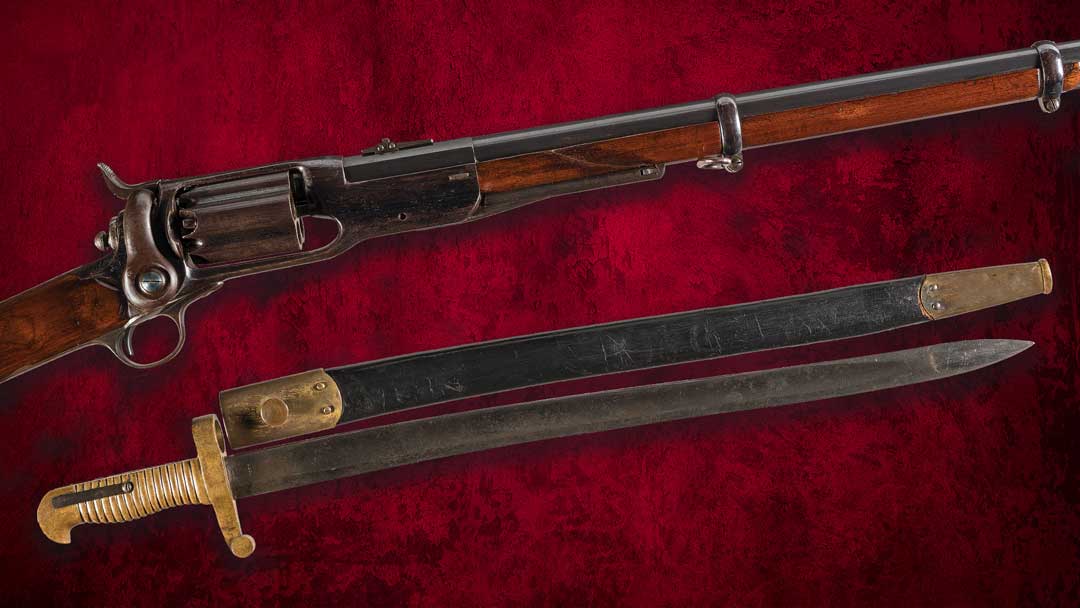 This historic Colt presentation rifle features a rounded brass blade front sight, lug for a saber bayonet on the right side, two barrel bands, sling swivels on the middle band and lower tang.

The samurai delegation’s departure from New York Harbor in June of 1860 was met with a tearful sendoff from their American hosts, but Muragaki Norimasa was eager to see his homeland again. By visiting America before other western nations, the Japanese had conferred a great honor on the United States and successfully accomplished their mission of observation, discovery, and normalizing trade relations with their American neighbors across the sea. 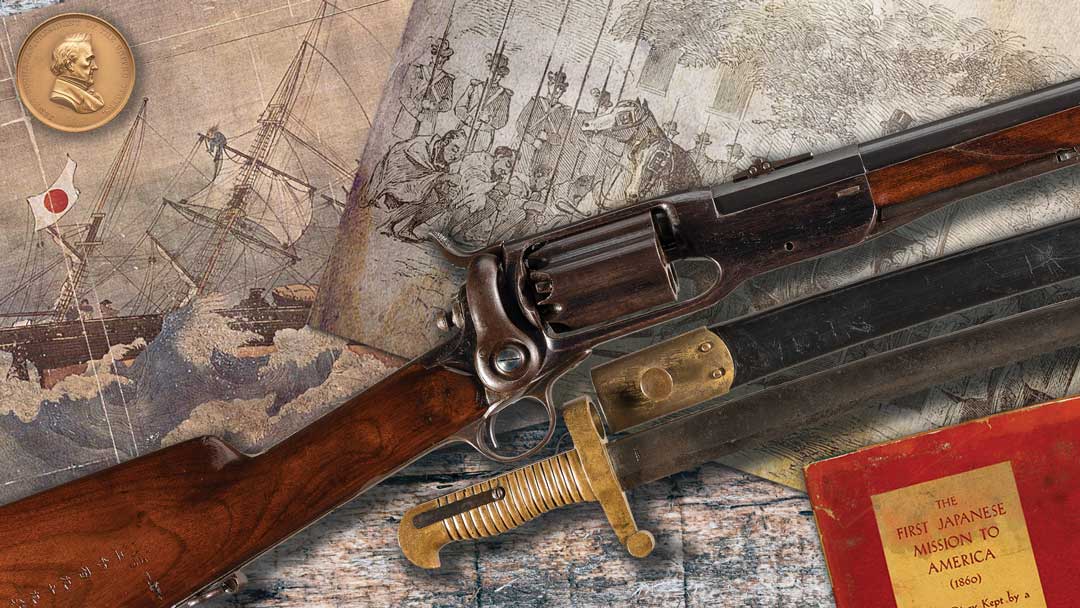 The samurai envoy to America was a landmark event for the Tokugawa Shogunate government of Japan, as just a few years prior any trip abroad would have been punishable by death.

The samurai’s visit to America marked the first Japanese delegation outside of Asia in more than two hundred years. Their voyage crossing the Pacific, then returning across the Atlantic down and around the Indian Ocean made them among the first Japanese to circumnavigate the globe. It had been an epic voyage, but the country to which Muragaki Norimasa returned to in November was even more fraught with turmoil than the one he had left.

The Fall of the Samurai

Just as America was rearing closer to Civil War near the end of Buchanan’s term, Japan was bracing for a rebellion of its own. While Muragaki Norimasa was still en route to Washington, Chief Minister Ii Naosuke of the Tokugawa Shogunate was assassinated on March 24, 1860 by Ronin samurai who opposed western influence and shot the Chief Minister with a Japanese copy of a Colt Model 1851 Navy outside the Sakurada Gate of Edo Castle. 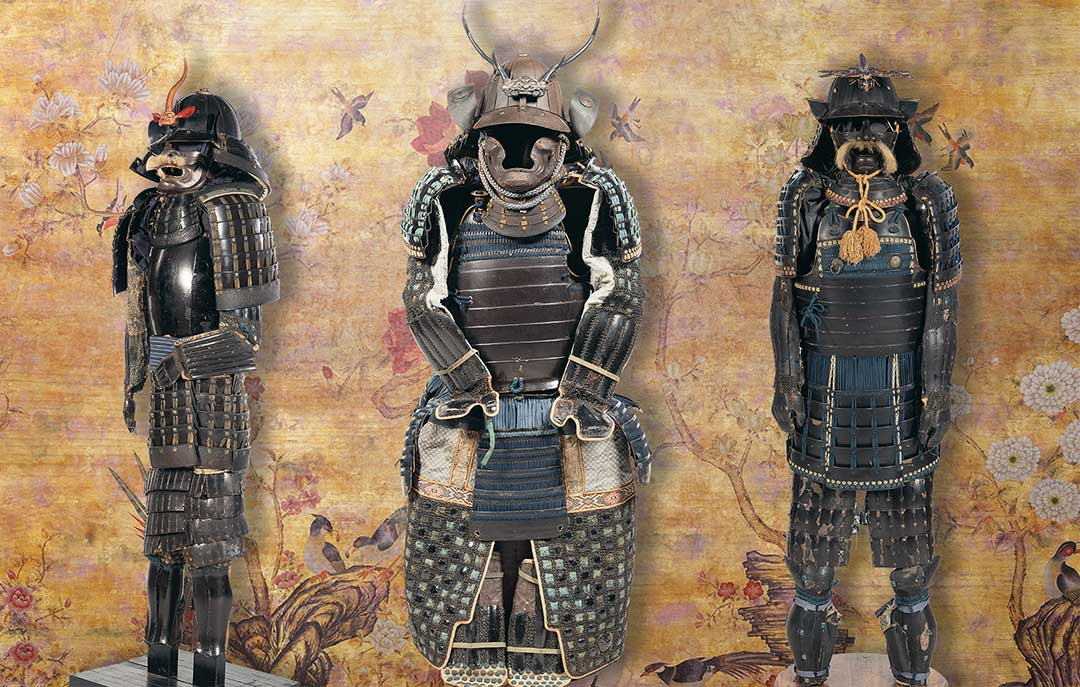 The heavily ritualized warfare of the samurai class rapidly gave way to Western military tactics during the Boshin War, and 19th-century guns and artillery rendered samurai armor obsolete. Offered in May’s auction from left to right: Lot 1271, Lot 3250, and Lot 1267.

Tensions exploded into all-out war in 1868 as the question of how to respond to Western influence turned Japan upside down. The pro-imperial nationalists defeated the shogunate forces in 1869, ending the Boshin War and ushering in what is known as the Meiji Restoration, marking an end to the Edo Period and restoring the country to direct imperial rule. Japan’s once feudal military government would soon transform itself into a modern empire. 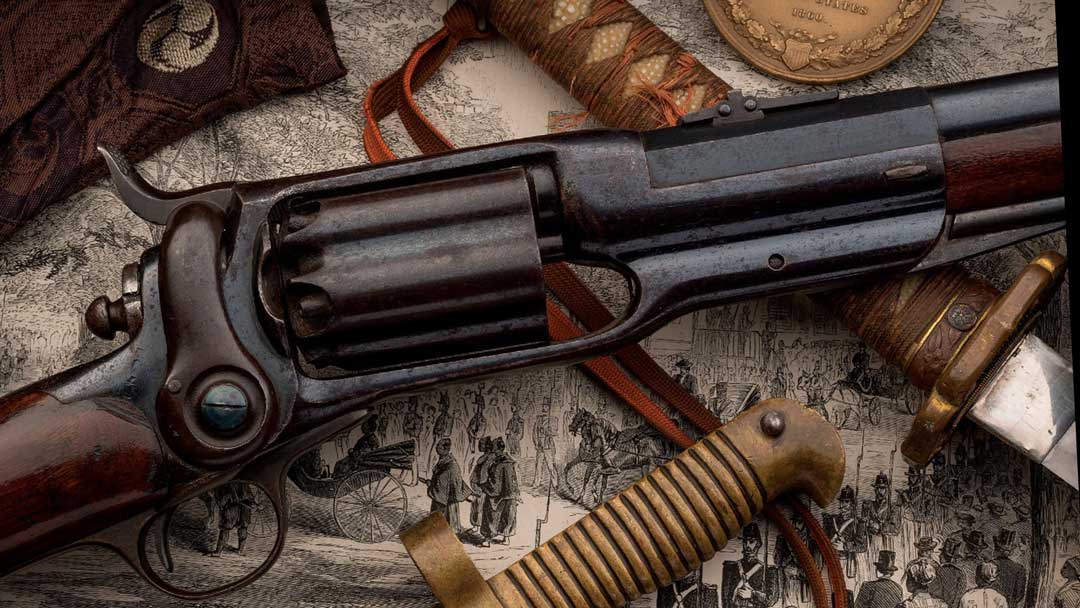 Commerce between the United States and Japan was delayed during the American Civil War and the Meiji Restoration, but ultimately Muragaki Norimasa’s samurai delegation had been a critical step in establishing a prosperous trade relationship between the two countries. Japan’s Treaty of Amity and Commerce to the United State would remain enforced for the next 40 years.

A Gun Fit for a Samurai

The Colt rifle presented to Muragaki Norimasa found its way to America again in May of 1946 when it was brought back by 1st Lieutenant Stuart M Beard III after Japan’s defeat in WW2 and subsequent occupation by Allied forces. As historic presentation pieces go, this Samuel Colt presentation Model 1855 revolving rifle to the first Japanese embassy to America is one of the most significant guns featured in Rock Island Auction Company’s May Premier Firearms Auction, and the impressive rifle checks all the right boxes as a one-of-a-kind collector’s gun. 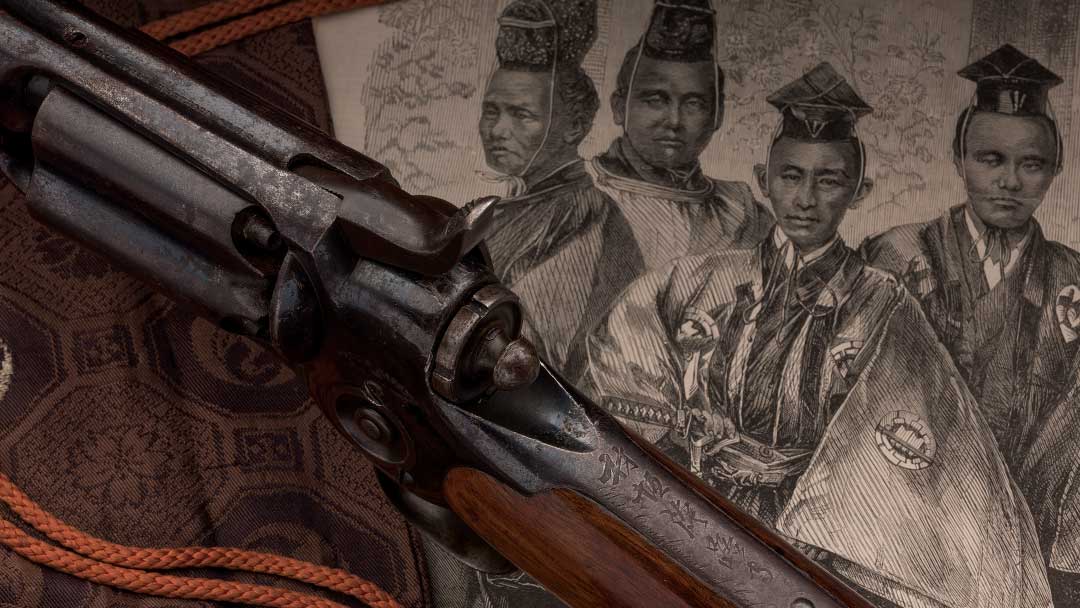 The guns gifted to the samurai delegation represented an offer of trade and future weapons deals, but Colt’s revolving rifle inscribed to Muragaki Norimasa also symbolized a new age for Japan in many ways. The Industrial Revolution had arrived by force in the Land of the Rising, and after more than two centuries of isolation and a brutal Civil War, the Japanese would enter the modern world as a major power. 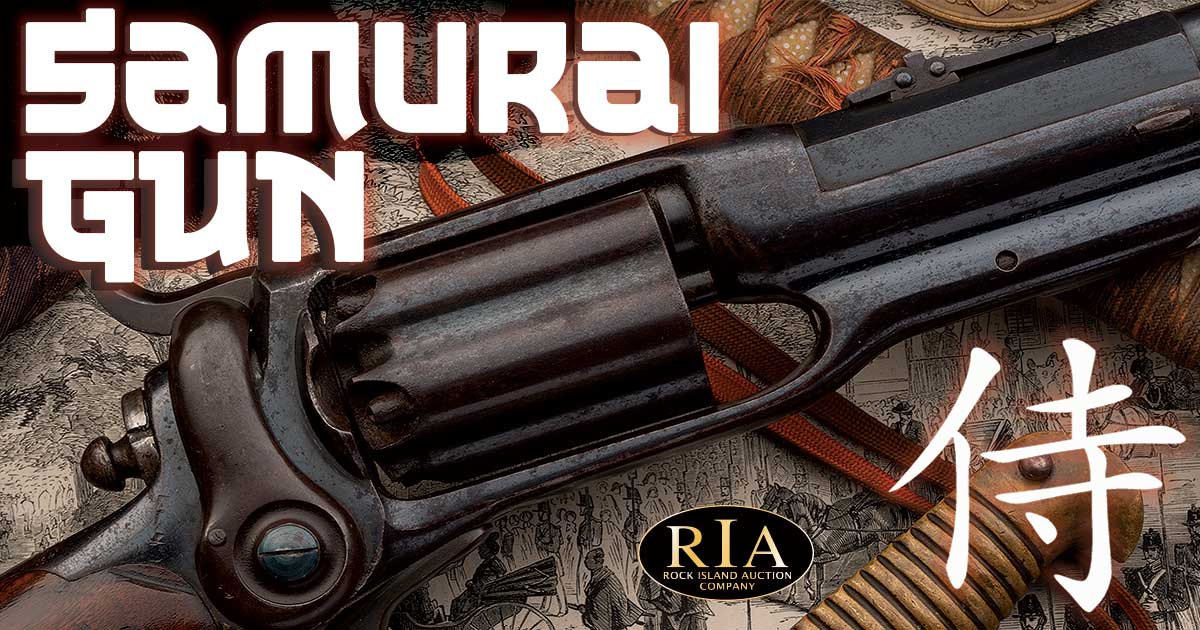