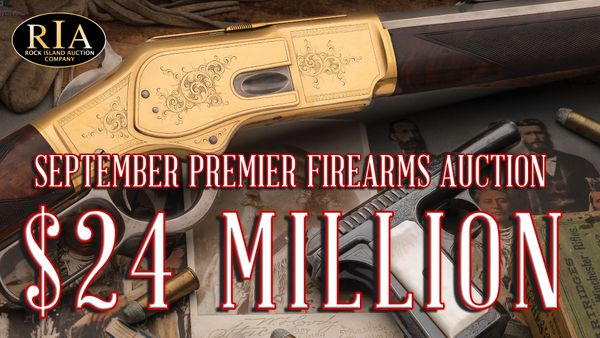 September’s Premier had been hailed as “a Celebration of Legends”, and that’s exactly what the auction delivered. The catalog was packed with an all-star lineup of legacy guns hailing from world-renowned collections. Names like George Moller, Robert M. Lee, Tom Lewis, Mac McCroskie, Dr. Robert Azar, Allan Cors, Dr. Gerald Klaz, Malcolm King, Clive Cussler, and John Fox headlined the three-day extravaganza, reading like a list of who’s who in the world of fine firearms.

Fall was in the air auction week, with football kicking off, hunting season on the horizon, and a crisp, clear morning to usher in Thursday’s Preview Day. Collectors, shooters, historians, and investors from across the country examined a spectacular selection of world-class firearms and militaria in RIAC’s expansive Preview Hall. The turnout was terrific, the energy was exhilarating, and our guests were treated to our fantastic annual barbeque that set the perfect mood for the three-day spectacular to follow.

Friday morning saw a lively crowd eager for a chance to own some of the remarkable treasures up for bid, and even standing room was prime real-estate inside the auction hall. The stage was set, the refreshments were flowing, and the anticipation was off the charts as our guests shared their excitement and which pieces they most looked forward to watching cross the podium.

RIAC CEO Pat Hogan opened with a heartfelt tribute to Gus Cargile Jr., famed collector and longtime friend to Rock Island Auction Company. A Texas native, seasoned world traveler, and proud U.S. Marine Corps veteran, Gus Cargile Jr. was an American original and an inspiration to everyone who had the privilege to meet him.

Gus Cargile’s front row chair sat in reserve throughout the three-day Premier auction, a tribute to a true gentleman.

With thousands of sealed bids, a jammed-packed audience, and hundreds of phone and online bidders eager to jump in on the action, the competition was spirited from the start and never let up. A selection of Winchesters made an impression early, with a 1894 Takedown rifle landing $103,500, a factory engraved Winchester Deluxe Model 1903 from the Richard P. Mellon Collection more than doubling its high estimate for $126,500, and a fabled One of One Hundred Winchester Model 1876 rocketing past its projection for a staggering $690,000. The auction hall erupted in applause, one of many thrills that would treat the crowd in the days ahead.

Muzzleloaders were next to shine, and an incredible assortment from the George Moller Collection passed the podium Friday morning, including an unaltered U.S. Harpers Ferry 1841 percussion “Mississippi Rifle” that brought in $6,900, a pair of H.W. Mortimer flintlock dueling pistols that took home $13,800, a cased pair of H.W. Mortimer & Son Carbine bore flintlock pistols that netted $19,550, and one of the auction’s numerous historic treasures, an A. Harrington flintlock rifle attributed to President Andrew Jackson that realized a phenomenal $172,500.

A pair of American military prototypes made a splash with the auction hall Friday afternoon, with a Serial Number 3 Colt Model 1910/1913 prototype Trials pistol from the Dr. Robert Azar Collection achieving a hefty $241,500, and the equally rare Springfield 1924 Primer Garand rifle went to a lucky bidder for $160,100.

The perfect storm of world-class American military arms continued with a U.S. Army issued SIG Sauer M17 pistol garnering $9,200, a WWI Era U.S. Winchester Model 1897 trench shotgun grabbing $23,000, and a U.S.M.C. Springfield M1C 1952/MC-1 sniper rifle doubling its high for an impressive $31,625. The machine gun market is hotter than ever right now, and a U.S. Colt M16A2 took in an explosive $37,375 after a spirited round of bidding worthy of the incredible firearm.

Wheel guns ended the day in style, with two consecutive engraved Colt SAA revolvers and a Texas Ranger Colt New Service revolver each taking in an astounding $25,875. Next, a pair of Smith & Wessons from the Hank Williams Jr. Collection made a big impression with the crowd. The Country Music icon is a lifelong fan of classic firearms, and his great tastes in revolvers were shared by the auction hall Friday evening as a Hank Williams Jr. inscribed Smith & Wesson Model 27-2 went for $10,350, and a presentation Smith & Wesson .357 Registered Magnum shattered its high and brought in a noteworthy $31,625. Colt revolvers mounted a comeback for one of the final items of the day, with a Colt 2-digit Python DA more than doubling its high and raking in $34,000, proving yet again how popular the Python platform remains to collectors.

Day two opened with a moment of silence and remembrance for the nearly 3,000 lives lost on September 11, 2001. Rock Island Auction Company and our patriotic guests also honored the service members, first responders, and the ordinary Americans who risked their lives to save others. September 11th is celebrated across the country as Patriot Day, and that sentiment of unity and shared resolve our nation felt in the days following the horrific attack twenty years ago was reflected in the auction hall Saturday morning as we honored the promise to “Never Forget.”

Day two made an early statement with an even greater abundance of firearms than day one’s ample offerings, and several wish-list items crossed the podium early on. A Winchester Model 1866 lever action saddle ring carbine and a Civil War New Haven Arms Henry lever action rifle both more than doubled their high estimates, for an impressive $40,250 and $63,250 respectively, but it was soon time for flintlocks to have their day in the spotlight.

George Moller’s works on early U.S. shoulder arms are a vital resource for gun collectors, and it was Rock Island Auction Company’s great privilege to offer hundreds of pieces from Moller’s historic collection this September. A trio of revolutionary flintlocks from the Moller collection shattered their high estimates, with a 1775 dated French St. Etienne pistol netting $10,350, a South Carolina marked Dutch musket garnering $25,875, and a Twigg silver mounted Officer’s fusil taking it a spectacular $34,500. A rare Henry Nock Royal Navy seven barrel volley gun created a huge buzz as it came blazing in at a whopping $48,875.

The Civil War artillery soon joined the action, with a U.S. Model 1861 10-Pounder Parrott Rifle finding its mark with $57,500, a New York Delafield Rifled field gun making an impact with $92,000, and a Mexican-American/Civil War 1837 dated N.P. Ames 6-Pounder cannon rocking the auction hall with a final price of $97,750. A finale to the bombardment came from a later military weapon, the famous Colt U.S. Navy Mark II Model 1900 Gatling gun roaring in at $287,500.

High art was in full form Saturday afternoon, with a pair of flintlock pistols by Devillers achieving $20,700, a Nicolas-Noel Boutet presentation pair of dueling flintlock pistols garnering $230,000, and the absolutely spectacular Crystal Palace Exhibition Gastinne-Renette percussion pistols stunning the crowd as they sold for $345,000.

Our guests were treated to a perfect third and final day of bidding Sunday. The temperature teased 90 by early afternoon, a reminder that summer wasn’t going out quietly, and inside the bidding heated up in turn. Jack Crawford’s 1873 Winchester, formerly of the iconic Robert M. Lee Collection, became one of the undisputed stars of the sale in day three’s opening moments. After a spirited competition between the phones and the floor and the online consoles, a lucky bidder on RIAC Live came out on top. When the dust was settled, Jack Crawford’s legendary Winchester nearly doubled its high for a thunderous $718,750, a fitting price for such a fabled gun.

Manufactured in Nepal in 1896/97 and looking as if it came off the pages of a Jules Verne’s novel, the hand cranked double barrel Bira Gun is as rare as it is unique in design.

The British had a strong showing as well, with several rare firearms from across the pond tripling their estimates like this pair of Wogdon double barrel flintlock pistols, a British Royal Artillery flintlock carbine, and a Long Land Brown Bess flintlock. High pedigree rarities like this Duke of York’s Tatham & Egg over/under flintlock pistol rallied for $34,500.

Engraved shotguns and double rifles are no stranger to Rock Island Auction Company Premier events, and Sunday featured numerous standout performers just in time for hunting season, including a Westley Richards .22 double rifle, a Ken Hunt Engraved & Inlaid Purdey 20 gauge side by side shotgun, and a Holland & Holland 10 bore double barrel paradox gun that soared past its estimate and netted $57,500. A pair of Holland & Holland sidelock double guns stole the spotlight and garnered $115,000.

The 1911 family and its precursors continued to make waves, including a U.S. Army Second Contract Colt Model 1900 from the Gus Cargile Collection, a Korean Marked 1911A1 copy that more than quadrupled its estimate and landed $23,000, a North Vietnamese 1911A1 copy that absolutely shattered its high and went for $34,000, and an engraved Colt Model 1903 Pocket Hammerless took home $40,250.

Another highlight from the Dr. Robert Azar Collection, this gorgous Colt Model 1903 Hammerless more than tripled its high.

A Celebration of Legends

Rock Island Auction Company’s September 10th – 12th Premier Firearms Auction was a celebration of legends that lived up to the name. Interest in fine arms is at an all-time high, and September’s auction demonstrated its wide and lasting appeal. As the number one firearms auction house in the world and the industry’s undisputed leader for nearly two decades, Rock Island Auction Company made a clear statement to the fine arms collecting community with September’s staggering $24 million total.

To the guests who traveled to join us here in Rock Island, to the thousands who sent in sealed bids, and to our firearms friends who participated live via phone or through our online platforms, we can’t thank you enough for making this auction such an outstanding success. The firearms collecting market is hotter than ever, and we’re grateful to be part of such a thriving and dedicated community. Your support means the world to us!

September’s Premier was nothing short of historic, and Rock Island Auction Company’s December’s Premier Firearms Auction is shaping up to be another spectacular, so keep an eye out for the online catalog in the weeks ahead. The next Sporting & Collector auction is set for October, but there’s an Arms & Ammunition auction coming up later this month, an exciting live format where bidders can place sealed bids and bid both online and over the phone. A booming gun market and our ever-expanding audience of firearm enthusiasts have kept the momentum high, and we’ve still got plenty of auctions left before the year is through! Thank you again, and we’ll see you in October!