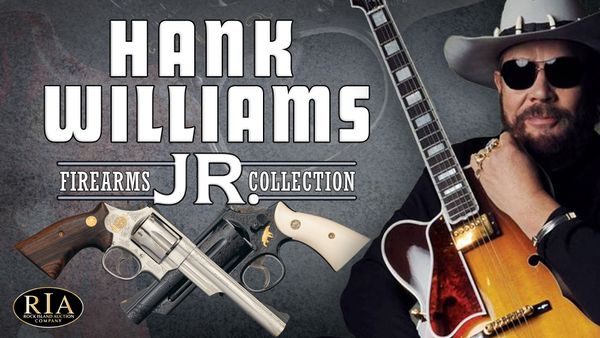 Any fan of country music, Monday Night Football, and American entertainment will instantly recognize the legendary Hank Williams Jr. From his signature hat, beard, and sunglasses to his larger than life persona, the man called Bocephus has truly left his mark on popular culture. For anyone who follows the famous singer-songwriter, it should come as no surprise that this “good old boy from Alabama” is also an avid outdoorsman, hunter, and lifelong gun collector.

Hailing from a long line of gun owners, Hank Williams Jr. started collecting at an early age. As the singer’s fame and fortune grew, so did his firearms collection, covering everything from antiques like the Remington Model 1875 SAA to comparatively modern revolvers such as this Smith & Wesson prototype 629. Rock Island Auction Company is proud to offer forty-one revolvers straight from the Hank Williams Jr. Collection in this September’s Premier Firearms Auction.

Each revolver from the Hank Williams Jr. Collection includes a certificate of authenticity confirming ownership by the country music megastar.

“Some people like to sit around in country clubs and sip martinis. Some people like to hunt and fish and make belt buckles and pistol grips, and write songs, and try to trap a red fox. I’m one of those people.”   –  Hank Williams Jr.

Manufactured in 1981, this deluxe custom engraved Smith & Wesson Model 49 revolver instantly evokes the style and flair of Hank Williams Jr. The music theme is highlighted with a gold inlaid treble clef on the right grip panel and a chiseled guitar on the trigger guard, but the most striking image is the bust of the singer’s famous father, Hank Williams Sr., depicted on the frame in his 1950s pinstripe suit.

Smith & Wesson Model 49 DA Revolver Inscribed to Hank Williams Jr., featuring a relief gold inlaid bust of Hank Williams Sr. in one of the most recognized images of his career.

A special order S&W 3 inch Model 49 revolver with full coverage scroll engraving is a rare enough find, but one that was manufactured for, owned by, and inset with the name of a country music powerhouse like Hank Williams Jr. is the definition of a one-of-a-kind gun. Like the singer’s illustrious career, this revolver tells the story of joining the old and the new, the music passed from father to son, of honoring the inspirations of the past while trailblazing ahead and defining a unique legacy.

“I learned something from Lynyrd Skynyrd, from my Daddy and Ernest Tubb, too. I do country rock, I do blues.”   –  They Call Me Bocephus, Hank Williams Jr.

Hank Williams Jr. has a passion for hunting, fishing, and the wide open country. Just as that connection to the wilderness is referenced in many of his songs, the singer’s love for the outdoors is also reflected in his custom order Smith & Wesson Model 25-5 DA revolver. This S&W 25-5 is a more compact 4-inch model, a sturdy mountain gun in .45 LC that lives up to Smith & Wesson’s reputation for quality.

Shipped to Hank Williams Jr. in 1979, this revolver is engraved with a gold inlaid bear scene on the left side of the frame and a mountain lion on the right, with the back strap inscribed “HANK” in fancy script and flanked by two gold stars. Near full coverage floral scroll engraving mixed with geometric patterns ornament the entire gun, the magnificent work of famed Smith & Wesson master artisan Domingos Joaquim, who signed the underside of the ejector shroud with his trademark eagle head. A must-have collector’s piece for any lover of fine firearms, country music, or the great outdoors.

“One guy spends a quarter million dollars for a painting. Another guy finds something to show for a couple hundred dollars that is just as good to him.”   –  Hank Williams Jr. on gun collecting.

You don’t become one of the most celebrated outlaws in the country music world by following trends, and Hank Williams Jr.’s habit for going big is personified in this beautiful behemoth of a revolver. The Smith & Wesson 629 is a serious gun chambered in the powerful .44 Magnum. The legendary singer chose to identify his ownership of this custom engraved revolver with a single gold inlaid “H” on the back strap, bold and larger than life, like the spectacular gun it decorates.

Like many of the Smith & Wessons offered in this fantastic collection, this revolver is a true work of art. The cylinder release has been blued creating an attractive contrast against the stainless steel frame and the gold inlay accenting almost every area of the gun, and S&W master engraver Paul Piquette’s brilliant scrollwork is evident throughout. Beyond that, the 629 is a tried and true revolver design that’s just a fun gun to shoot, and we wouldn’t expect anything less from the rowdy king of country.

History, rarity, and condition are all prized qualities to gun collectors. Combine those with a big game theme and a direct connection to S&W Vice President Douglas B. Wesson, and you can see why this .357 Registered Magnum revolver was a perfect match for Hank.

This engraved revolver was shipped to Douglas B. Wesson in 1938 and carried by one of his guides on a hunt in Crazy Bear Canyon, British Columbia. Hulger Bidstrup, whose initials are inscribed on the gun, brought down a bull moose and a 7 1/2 foot grizzly with the powerful revolver as part of a grand marketing campaign Douglas Wesson orchestrated throughout the 1930s to help popularize handgun hunting and the new .357 Magnum cartridge. Decades later, Hank Williams Jr. bought the revolver for the same purpose and has kept the gun in magnificent condition.

“Hey the kind of game I’m talkin’ about is not that hard to snare. But they can be more dangerous than a big ol’ grizzly bear.”   –  Gonna Go Huntin’ Tonight, Hank Williams Jr.

Hank Williams Jr.’s love for American history is another theme woven into his music, and these next two treasures from his collection each have stories to tell. The first of two engraved 19th century Smith & Wesson No. 3 revolvers up for auction this September is an American 1st Model single action inscribed to Union Colonel Orlando Moore.

Col. Moore served from 1856 to 1865 and again from 1874 to 1884. Among the storied periods of his Army career, he helped foil a conspiracy by Southern sympathizers in the Western states and territories to form a Pacific Republic in 1861 and he spent most of the Civil War commanding the 25th Michigan Infantry. Outnumbered nearly four to one, Moore decisively defeated Confederate General Morgan at the Battle of Tebbs Bend.

Another custom revolver that combines Hank Williams Jr.’s passion for music and fine firearms. The Model 27-7 is often hailed the “Cadillac” of revolvers, and this high condition example certainly fits the bill.

This revolver was built both for comfort and style, with Goncalo Alves target grips inlaid with hearts and music notes. “HANK” is inscribed on the sideplate, a name that stands alone in the country music industry, and a name that evokes quality and condition when it comes to maintaining classic revolvers.

A lawman’s gun owned by country’s greatest outlaw? This U.S. Smith & Wesson First Model Schofield SA revolver was manufactured for the U.S. military and later issued to the San Francisco Committee of Safety during the labor riots and civil unrest of 1877-78.

Approximately 300 Schofield models were issued to the San Francisco Police to counter the great railroad strikes that were springing up across the United States. Hank Williams Jr. was undoubtedly attracted to the history of the gun and its fine condition, an antique revolver carrying the authentic grit of the American West.

Our forefathers could hit the mark they were aiming at. I really lost most of my interest in any type of modern guns.”   –  Hank Williams Jr.

No revolver collection would be complete without a Colt or two. As a Montana ranch owner and a part-time resident who calls Big Sky Country his home away from home, Hank Williams Jr. likely took special interest in the story behind this .41 Army Special Colt DA that was shipped to the Anaconda Copper Mine Company of Butte, Montana in 1915.

As one of 12 guns in the shipment, this revolver was used to help secure the Anaconda Copper Mine as its production spiked to meet the booming demand for electrical wiring. Marcus Daly, one of the three “Copper Kings” of Montana, developed the Anaconda mine into one of the largest trusts of the early 20th century. Another classic revolver steeped in American history, and a great piece for any Colt or Western collection.

It goes without saying that Hank Williams Jr. has an enormous love for Smith & Wesson revolvers, and the company took it upon themselves to honor him throughout the years for his special support of their brand. The following three examples from the Hank Williams Jr. Collection were presented to the famous singer and songwriter, starting with a Class A engraved, blue finish S&W Model 24 revolver shipped to Williams by the Smith & Wesson Marketing Department in 1983.

The country music megastar received another Smith & Wesson birthday gift in 1989, this time to celebrate his 40th. This prototype stainless .44 Magnum revolver was one of the 139 produced in 1978 for testing the new Model 629, and one of only 75 revolvers that made it through the rigorous trials. The sideplate is engraved with “HANK” over his trademark rising phoenix with “40” in the center and “May 26, 1949” (Williams’ birthday) underneath.

The following year, Williams received a first of its kind 29-5 DA revolver produced by the Smith & Wesson Performance Center, using a then-current production frame and specially selected cylinder with an original 1958 production new-old stock barrel that was custom lead-lapped for this special order gun.

The sideplate is engraved “HANK”, with masterfully applied floral scroll accents above and below, and the bottom of the grip bears the special serial number “RHW001”, the initialed birth name of Randall Hank Williams.

A CELEBRATION OF LEGENDS

Rock Island Auction Company’s September Premier Firearms Auction is a true celebration of legends, and Hank Williams Jr. certainly embodies that title in every way. As one of the all-time greats in country music, Bocephus defined his image around the celebration of classic Americana. His collection of firearms reflects that same appreciation for tradition and heritage, offering everything from fine antiques to modern classics in the making, and you can’t get much more American than that.

September’s 10-12 Premier Firearms Auction features the biggest names in the field of fine arms collecting, including guns from across the generations. We’ve only just scratched the surface of the treasures offered this September, so dive into our online catalog, place your bids, and get ready for this fall’s biggest event in firearms collecting.