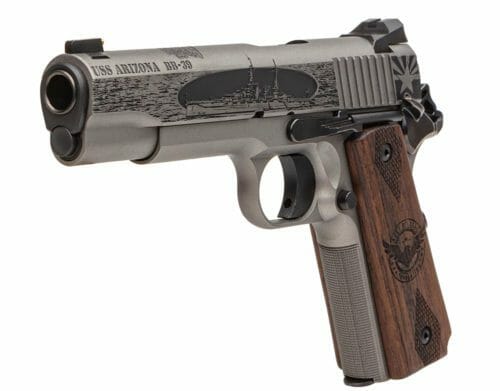 “It was truly an honor to create these custom pistols and we are humbled to have the opportunity to partner with the Best Defense Foundation to salute these men and women of the greatest generation,” said Tom Taylor, Chief Marketing Officer and Executive Vice President, SIG SAUER, Inc.  “The foundation is providing any World War II veteran that wants a measure of closure the opportunity to return to their battlefield and we hope these pistols will bring recognition to their efforts.  From the shores of Normandy to Pearl Harbor, the foundation has made it their mission to honor these veterans’ sacrifice and we are forever thankful for their dedication to that mission.”

The unique distinguishing features of the commemorative 1911 pistols crafted by SIG SAUER Custom Works are:

1911 Pistol: The 1911 pistol was one of the most commonly issued pistols and carried by U.S. forces throughout World War II.  Each of the commemorative 1911 Pearl Harbor pistols feature engravings designed in collaboration with Outlaw Ordnance customizations, and a Battleship Gray Cerakote matte finish on the frame and slide. The pistols are chambered in.45 AUTO with an SAO trigger, Gold Dot Novak

Pistol Grips: The custom grips on each of the pistols were designed and manufactured by Chad Schumacher at Allegory Goods, and are crafted from teak decking salvaged from the USS North Carolina.  After the Pearl Harbor attack, the USS North Carolina was sent to the pacific to strengthen allied forces during the Guadalcanal Campaign and was part of the offensive operations supporting the Battle of Iwo Jima and the Battle of Okinawa.

Pearl Harbor Commemorative Pistol: Engravings commemorate the date and time of the attack: December 7, 1941, at 7:55 am where Japanese warplanes descended on the U.S. Naval Base at Pearl Harbor, and the address by President Franklin Delano Roosevelt to the U.S. Congress formally requesting a declaration of war between the U.S. and Japan where he began with “A day which will live in infamy.”

USS Arizona (BB-39) Commemorative Pistol: Engravings commemorate the USS Arizona which was hit by Japanese torpedo bombers which detonated in a munitions magazine, which violently exploded and sank the ship, losing 1,177 officers and crewmen.  The USS Arizona Memorial at the Pearl Harbor National Memorial was dedicated on May 30th, 1962 to honor all those who died during the attack.

USS Oklahoma (BB-37) Commemorative Pistol: Engravings commemorate the USS Oklahoma which served in World War I and protected allied convoys across the Atlantic.  During the Attack on Pearl Harbor, Japanese torpedo bomber airplanes hit the Oklahoma’s hull causing it to capsize.  A total of 429 crew died, as a result, others jumped to safety, were rescued through hatches or from drilling holes in the side of the hull.

The commemorative 1911 pistols have been presented to the leadership of the Best Defense Foundation.

A full series of photos of the Pearl Harbor Commemorative 1911 pistols are available for viewing at sigsauer.com.

SIG SAUER, Inc. is a leading provider and manufacturer of firearms, electro-optics, ammunition, airguns, suppressors, and training. For over 250 years SIG SAUER, Inc. has evolved, and thrived, by blending American ingenuity, German engineering, and Swiss precision. Today, SIG SAUER is synonymous with industry-leading quality and innovation which has made it the brand of choice amongst the U.S. Military, the global defense community, law enforcement, competitive shooters, hunters, and responsible citizens. Additionally, SIG SAUER is the premier provider of elite firearms instruction and tactical training at the SIG SAUER Academy. Headquartered in Newington, New Hampshire, SIG SAUER has over 2,300 employees across nine locations. For more information about the company and product line visit: sigsauer.com.