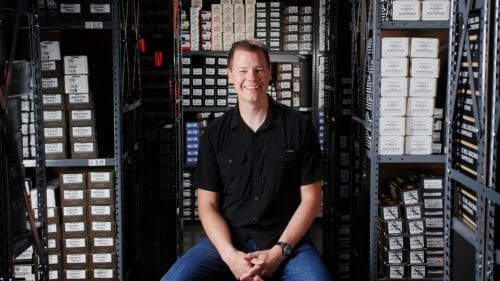 U.S.A. –-(Ammoland.com)-The first commercially successful suppressor was sold by Hiram Percy Maxim around 1902. Maxim patented his item as a Maxim Silencer in 1909. Maxim called his invention a silencer because in many countries at the time, mufflers on vehicles were referred to as silencers.

In 1934 Congress added silencers to the newly passed Nation Firearms Act (NFA). The $200 tax stamp put these devices out of the reach of the average citizens, and Hollywood would start pushing suppressors as a tool of assassins. To a lot of people, that stereotype still exists to this day.

But with the $200 tax stamp becoming more affordable, more and more people are buying suppressors. These buyers are not hitmen. They are everyday gun owners looking to protect their hearing.

One of these gun owners that wanted to protect their son’s hearing is Dave Matheny. Dave found the process of buying a suppressor so confusing that it made him realize that there was a business opportunity to streamline and simplify the process. He founded Silencer Shop and produced a kiosk that became a one-stop-shop for everything needed for the government paperwork. Silencer Shop now sells most of the suppressors sold in the United States.

I had a chance to talk to Dave about suppressors and what drove him to start Silencer Shop.

John: How long have you been into firearms?

Dave: I have been into firearms all of my life. The first firearm I ever owned was a .22 rifle that my parents got me for Christmas. Funny fact, it was the only present I got that Christmas, and I still have that rifle, actually. Growing up in Missouri, that rifle went everywhere it possibly could with me. I went through a phase, probably in my twenties to early thirties, where I didn’t shoot at all. Then I got back into firearms in my early thirties.

John: Why did you buy your first suppressor?

Dave: The first suppressor I bought was specifically for my middle son, Carter. Carter was born half deaf: 100% deaf in his right ear and 100% full hearing in his left. Hunting is something we enjoy doing together, and he was never a fan of ear pro. I tell ya, whenever we’d throw ear pro on him, he’d just bounce off of the walls trying to get them off. So I bought that silencer to protect his hearing in his good ear. And that’s what suppressors are, simply hearing protection.

John: Why did you start Silencer Shop?

Dave: It was related to buying my first silencer, and that went as wrong as it could have! The first time I tried to buy a suppressor, the dealer went out of business during the approval process. I ended up having to corner him at his storage facility. Luckily, I got the silencer.

The second suppressor I bought was from a reputable shop that had been in business for years, but they wouldn’t help me with the paperwork. Anyone doing the Form 4 paperwork the first time themselves will make mistakes, so of course, I got an error letter. This second dealer wouldn’t help me resolve it either. At the end of the entire process, they ended up giving me a silencer that was a different model from what I ordered.

At that point, Silencer Shop wasn’t even an idea; I just wanted to help people avoid what I went through and help facilitate NFA transfers. My goal was to help people file paperwork-not to sell silencers. I wasn’t planning on quitting my job. Not initially, anyway!

John: I come from the tech world as well. Software is basically an expanding logical instruction set. Do you think that because you have a software developer mindset, it helped you make a streamlined approach to the paperwork involved in buying a suppressor?

John: Silencer Shop started as a side hustle for you and now accounts for more than 50% of all suppressor sales in the US. When did you know that you were onto something big?

Dave: I think it was the very first month we went live. We launched the website while on a family vacation, and I didn’t expect it to do anything. Almost from the instant, the site went up; it went crazy! The first month, we sold $19,000 worth of products. I thought, “This is awesome!” But then it kept doubling, month over month, and within six months from the time that site went live, I had a full-time employee working at my house. I didn’t actually quit my job for about a year and a half.

Dave: I hear a lot that many younger silencer buyers get in the mindset of “I know what I’m doing,” and they decide to register as an individual. I feel like that mindset is broken. I personally think about everyone should register using a trust. This isn’t just self-serving because we sell trusts.

There’s someone who used to work for a leading suppressor manufacturer, a really great guy, that lived in Nevada. At the time, he thought he would never leave. Well, he accepted a job offer from a company based in a state that doesn’t support silencers. Keep in mind that he had eight suppressors that he owned as an individual. He couldn’t bring them to his new state. What did he have to do? He had to transfer eight cans to a SOT (Special Occupational Tax) and pay the $200 tax stamps per transfer to that SOT. Once that transfer cleared, he then had to reissue a transfer into a trust, another $200 per can. He’s currently waiting for his eight cans to get approved for his trust. $3,200 and two years-ish later.

That is a perfect example of why you should really think through your buying options as an individual unless you don’t plan to move anywhere ever in your life. It’s a limitation that is easily solved by $150. There’s a $200 tax and a wait, and it seems simple when you’re 23. But for most people, it’s not the right choice.

John: Silencer Shop has a really cool kiosk set up in gun stores. Can you tell us a little bit about that?

Dave: Since the regulations changed in 2016, the kiosks have enabled us to push a mindset of simplicity into the market. I think the kiosks have been a game-changer. If it weren’t for that, I think the market post-2016 would be a lot smaller than it is. The development of the kiosk was a giant undertaking for all of us. We were working in one tiny room, and it took about eight months.

We started building them in February and finished in October. During that entire time, I didn’t take a single day off. There were several times I worked 70 hours straight. Then I would sleep for six hours and come right back. It took a team of talented individuals working together under insane work hours to get the kiosk up off the ground. I thought my wife was going to divorce me. Haha. It was a huge project.

I did most of the programming work myself. Granted, the majority of that code has been rewritten, tuned, and continually upgraded, but the first version was just brute force. The first 300 we developed we gave away, so it was a huge expense as well. It was a pretty big gamble, but it’s paid off for us and the larger market.

John: How did you come up with that idea?

Dave: When 41F was first signed in January 2016, it was right around SHOT Show. We realized right then it was going to change the way people buy silencers online. Since that is our major business, we would be more dependent on the downstream dealers to put together everything from fingerprints, paperwork, and all the rest. Up to that point, we had been doing that for our dealers. 41F could have lessened the value of buying a silencer online, and that’s where our idea came from.

We had the idea, “Let’s put together something that can automate the entire process in the store, including fingerprints!” During that initial month, we researched how digital fingerprinting works and if it would even be possible. We worked with everyone from the fingerprinting world, whether it was experts or the FBI, researching and investigating. And it has been a resounding success!

John: Are there any other new ideas in the pipeline you can let us know about?

Dave: Yes. But I cannot. (Laughter) We always have cool and innovative stuff coming! We just launched our new customer portal, which is a giant leap forward in usability. It’s almost a new platform. Our new dealer portal is coming soon-within a matter of weeks! But as far as significant underlying changes, we do have those coming, but we can’t talk about them yet.

John: Thank you for your time. Anything else that the AmmoLand readers should know?

Dave: Most importantly, thank you to everyone out there supporting the Second Amendment. The NFA industry and Silencer Shop wouldn’t be where we are if it wasn’t for the trust and support of our awesome customers.

Silencers are great hearing safety devices, they make shooting more enjoyable, and it’s never been easier to buy a silencer. Silencer Shop has worked tirelessly over the years to make silencer ownership simplified. Our customer service teams are incredibly dedicated, and we have over 20,000 5-star reviews that reflect that. If you have any questions check us out, we’d love to hear from you.

Silencer Shop can be found at: https://www.silencershop.com/