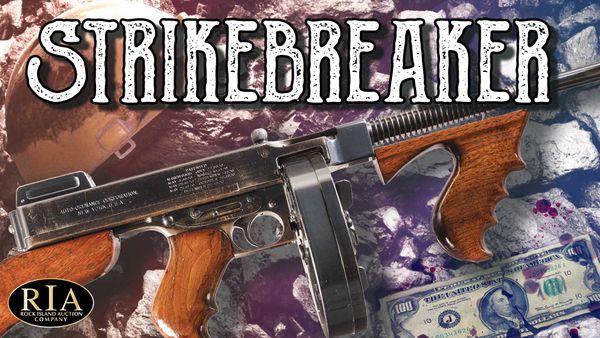 As the power of labor unions grew at the dawn of 20th century America, some private detectives, like operatives of the Baldwin-Felts Detective Agency and Pinkerton National Detective Agency worked outside the law as “the gunmen of capitalism.”

Baldwin-Felts, named after partners William Baldwin and Thomas Felts, was an agency known for the strike-breaking, union-busting dirty work of its operatives in mining towns. A Colt-made 1921 Thompson submachine gun owned by the agency is on offer at Rock Island Auction Company’s Premier Firearms Auction, Dec. 3-5.

In all, 24 submachine guns will be available at the December auction. The movies have long associated gangsters, G-men and GIs with Tommy Guns and picked up colorful nicknames over time like the “Chicago typewriter,” and by the GIs that used them, as “trench brooms.” Eight lots featuring the Tommy Gun are in the December auction.

Based in Virginia and known throughout Appalachia, the Baldwin-Felts Agency first worked for railroads, protecting property and payroll while investigating wrecks and robberies.

The agency rose to national prominence in March 1912 for tracking down members of the Floyd Allen clan after its members killed a judge, sheriff, prosecuting attorney, juror, and witness in a courtroom shootout. Allen was found guilty of interfering with an officer but refused to go quietly. The courtroom erupted in gunfire.

The sheriff’s death left the county without a top lawman so a Baldwin-Felts posse was dispatched to track down the outlaws. Operatives arrested Allen, who was wounded in the shootout, the following day.

The manhunt lasted for a couple of weeks as detectives rounded up the additional fugitives who had taken to the hills and hollows. Baldwin-Felts agents caught two others six months later in Des Moines, Iowa where they’d fled and were laying low.

Baldwin-Felts detectives were among the strikebreakers used by the Colorado Fuel & Iron Company to intimidate miners in Ludlow, Colo., in 1914. Baldwin-Felts agents, sworn in as county sheriff deputies, drove around the encampment in what miners called the “Death Special,” an improvised armored car with a mounted spotlight and machine guns. Agents would spray the tents with machine gun fire in intimidation with an occasional fatality.

Baldwin-Felts operatives are seen in the “Death Special” in Ludlow, Colo.

Striking miners evicted from their homes were living in a tent city in Ludlow. On April 20, 1914, the paid forces of Colorado Fuel & Iron Company opened fire on the tent city and set it ablaze. At least 19 people died, including 15 women and children igniting a 10-day guerilla war killing 75-100. Strikers destroyed mine buildings and tunnels and blew up the dam that provided water to the mines. The army was sent in to enforce order and arrested members of the mining company’s militia.

In May 1920, Baldwin-Felts agents were in Matewan, West Virginia evicting coal miners who joined the United Mine Workers of America. Pro-union Matewan Police Chief Sid Hatfield along with a mob confronted the agents, setting off a firefight. When the smoke cleared, Matewan Mayor Cabell Testerman lay dead along with seven detectives and two miners. Two of the detectives were brothers of Thomas Felts.

In a 2021 interview with West Virginia Public Radio about the Matewan Massacre, University of Tennessee historian Bob Hutton noted that as far back as 1913 – even before the Ludlow Massacre, Baldwin-Felts operatives were already referred to as “the gunmen of capitalism.”

Tension between miners and mine company owners was already simmering and ready to boil over in 1921 West Virginia. Mine owners raised a private army of about 2,000 men and readied for confrontation. Baldwin-Felts operatives who were already union busting organized the militia. Miners, enraged by their treatment and the assassination of Matewan’s Hatfield and a union organizer on Aug. 1, started gathering.

An editorial cartoon published at the time of the Battle of Blair Mountain.

In late August, the upstart army of coal miners, swollen to 10,000, started out on the 45-mile march from Marmet to Williamson in Mingo County. Their march would take them past Blair Mountain, a 2,000-foot peak. It was here that mine companies’ militia resisted and the fighting peaked near the end of the month. Despite having superior numbers, the miners were outgunned by the better-armed mining company militia that used airplanes to drop bombs and poison gas on the miners.

The route miners took toward Mingo County and Blair Mountain.

About that time, this Tommy gun on auction and nine others were delivered to Baldwin-Felts on Sept. 1, 1921, as the battle was coming to a close.

The U.S. Army arrived on the scene Sept. 2, putting an end to the conflict yet seemingly siding with the mine companies. Hundreds of miners were arrested but none from the mining company’s army. The miners were later acquitted.

Despite the size of both armies, historians put the death toll at just 16, with 47 wounded. The battle was the largest in the United States since the end of the Civil War.

In the 1930s as Federal Bureau of Investigation agents battled gangsters like Al Capone, John Dillinger, and Pretty Boy Floyd, the Baldwin-Felts Detective Agency slipped into decline. Legislatures passed laws prohibiting businesses from spying on their workers. Railroads formed security divisions.  Baldwin died in 1936 and Felts died a year later. When the agency dissolved, its files were destroyed. Weapons once confiscated by Baldwin-Felts agents and displayed in a museum room were dispersed among various employees and friends.

”… A very important thing to remember about Baldwin-Felts is the organization was founded by mountaineers. It was run by mountaineers. And most of the gunman they hired who shot miners or beat up Black railroad workers were native mountaineers,” Hutton said in that West Virginia Public Broadcasting interview. “So they’re getting their gun thugs from the same labor pool as the people that they’re torturing.”

The Baldwin-Felts Tommy gun is recorded as part of the Virginia State Police weapons inventory before going into private hands.

The Mail Must Get Through

U.S. Postal Service agents used Tommy guns first in the 1920s to protect mail from truck and train robberies. The U.S. Marine Corps was enjoined with protecting the mail and used the weapons as it took up that role.

The Colt 1921/1928 U.S. Navy overstamp Thompson submachine gun at auction in December is part of an order of 250 delivered to the United States Marine Corps in 1927. It went to the District Commander of the Eastern Mail Guard in Atlanta. Marines were deployed to stop mail robberies – and took the task seriously.

“When our Corps goes in as guards over the mail, that mail must be delivered, or there must be a Marine dead at the post of duty,” Secretary of the Navy Edwin Denby said. “There can be no compromise.”

The weapon was returned to the factory where it was upgraded to the 1928 parts standard which came with the overstamp and U.S. Navy marking. It went to the Tennessee Highway patrol before entering the commercial market in 1975.

Tommy Guns and other SMGs

A variety of submachine guns are on offer in the Premier Firearm Auction, including a German M.P.18.1, one of the earliest submachine gun designs that was developed in World War I. It earned a reputation as a good weapon in a close-quarters fight.

A Tommy Gun Story to Tell

Hollywood made the Tommy Gun a legend for its role in fighting gangsters or robbing banks. The Baldwin-Felts model offers the little-told and unsavory history of thugs using intimidation and violent – sometimes fatal– union-busting tactics against fellow Americans trying to make a better life.

This very fine and mechanically excellent example of a Tommy Gun along with seven others will be available at Rock Island Auction Company’s Premier Firearms Auction, Dec. 3-5.

“A century after the Battle of Blair Mountain, protecting workers’ rights to organize has never been more important,” by Dave Kamper, Economic Policy Institute, Aug. 25, 2021,

The Thompson Submachine Gun: Made for the U.S. Postal Service? The National Interest, by Peter Suciu, July 3, 2020

The Courthouse Tragedy: Gunfight in Hillsville in 1912, by Ralph Berrier Jr., The Roanoke Times, March 10, 2012

What Made the Battle of Blair Mountain the Largest Labor Uprising in American History, by Abby Lee Hood, Smithsonian Magazine, Aug. 25, 2021