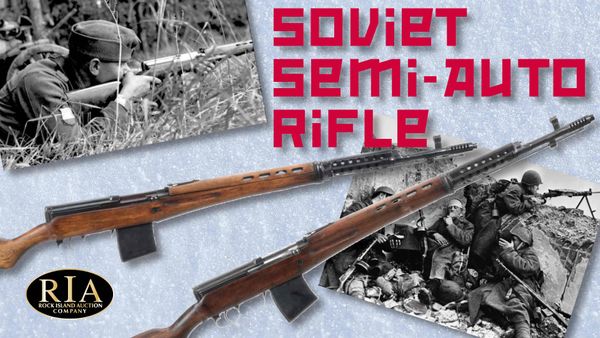 The semi-automatic Tokarev SVT-40 doesn’t get its due in the history of the weapons of the Eastern Front because of its disrupted production. A weapon on par with the M1 Garand, the SVT-40 was the gun the Soviets wanted but it wasn’t what they needed when the Germans invaded.

The Soviets, like many countries during the inter-war period, worked to develop a semi-automatic rifle to serve as a battle rifle for the Red Army, replacing the reliable but long-in-the-tooth Mosin-Nagant rifle. By 1938 they had one, the Tokarev SVT-38. The magazine-fed rifle weighed in at about 9 lbs. unloaded and was chambered for 7.6x54R ammunition.

In 1939, German forces invaded Poland from the west. A few weeks later, the Red Army invaded Poland from the east. World War II had begun, and the Germans and Russians stood by their uneasy non-aggression treaty. The SVT-38 was in production but performed poorly in the Winter War with Finland during the winter of 1939-40. The gun proved fragile and the magazine would fall out during action.

About 1 million SVT-40s were made and distributed to sergeants and sharpshooters by June 1941 when the Nazis broke the non-aggression pact and invaded Mother Russia. only about a half-million more SVT-40s were made the rest of the war while production of the bolt-action, easy-to-make warhorse, Mosin-Nagant, was increased.

Rock Island Auction Company’s Feb. 16-18 Sporting and Collector Auction features seven lots with SVT-40s, while there are 58 lots of the more abundant Mosin-Nagant.

A closeup of a Tokarev SVT-40.

Most of the SVT-40s were to be made at the Tula Arsenal, but the Germans slugged their way to the outskirts of Tula, about 120 miles south of Moscow, by the end of 1941. Germany’s blitzkrieg disrupted production of the SVT-40 and thousands were captured. Red Army units continued to use the simple and sturdy Mosin-Nagant. Both weapons used 7.62x54R ammunition.

SVT-40 production was suspended and moved across the Ural Mountains to other facilities.

A Soviet soldier holds his SVT-40 on German soldiers as another soldier searches them.

As the German and Russian forces fought across the steppe and even from building to building — the Nazis wanting to wipe out communism and the Slavic race, and the Soviets defending their homeland — production continued on the SVT-40. About 1.5 million were manufactured in total.

The semi-automatic SVT-40s were issued to better-trained and elite troops, while conscripts were issued the easier-to-use Mosin-Nagant or the close quarters-efficient PPsh-41 submachine gun. Lesser-trained troops often found the SVT-40 more difficult to operate.

A Soviet soldier lies prone and takes aim with his SVT-40.

For the Soviets in need of weapons, they pushed production of the Mosin-Nagant and PPSh-41 submachine gun. The SVT-40 took longer to make and were more expensive to produce than the other two. The PPSh was made using Mosin-Nagant barrels cut in half.

The brutal warfare along the Eastern Front would carry on through harsh, bitter winters, muddy springs, and scorching summers until the decisive Battle of Kursk in July 1943 on the heels of the Germans’ loss at Stalingrad a few months earlier.

As the war raged, the Germans turned around and used the captured SVT-40s. Some were sent back to Germany to see if they could be incorporated into a Nazi design.

The Germans used the SVT-40 design to produce the Gewehr 43 and Karabiner 43 that were much lighter, simpler, and sturdier as well as easier to produce than what the Nazis had been using. The rifle went into production in 1943 and the carbine in 1944.

A Soviet soldier urges on his comrades as he holds up his PPsh-41 submachine gun, also known as a “papasha” (Russian for “daddy”) or a “burp gun” because of its rapid rate of fire.

Origins of the SVT-40

The Soviets weren’t alone wanting a semi-automatic rifle as standard issue for their soldiers. Other countries also sought to develop a self-loading weapon, including the United States that developed the M1 Garand and Germany that borrowed from the SVT-40 to improve its semi-automatic rifle.

The SVT-40 was the Soviet’s third try at a semi-automatic rifle. The first was the AVS-36. It had issues with muzzle fire, recoil and standing up to abuse so was rejected. Fedor Tokarev, who designed the TT-30 and TT-33 semi-automatic pistols and even submitted a design to convert the Mosin-Nagant to semi-automatic, designed the SVT-38 and the SVT-40.

When production on the SVT-38 was stopped, the rifle was redesigned with a stock made of a single piece of wood, was lighter and tougher with less recoil, and the magazine release was improved. The upgraded SVT-40 was lighter but more robust and added a muzzle break to compensate for recoil. It was also simpler to make.

About 50,000 sniper-variant SVT-40s were produced. They had higher-quality barrels and the capability to mount a scope.

The gun’s semi-automatic capability gave the sniper the ability to maintain focus rather than having to work the bolt to reload. Soviet sniper Lyudmila Pavlichenko, known as “Lady Death,” was known to use an SVT-40 sniper model as she collected 309 Nazi kills on the Eastern Front.

Lyudmila Pavlichenko, known as “Lady Death” because of her sniper abilities, holds a Tokarev SVT-40. About 50,000 SVT-40s were made as a sniper rifle.

Still, the Mosin-Nagant was the more effective rifle for Soviet snipers. Vasily Zaytsev, whose heroics were portrayed in the film, “Enemy at the Gates,” collected 225 enemy kills during the Battle of Stalingrad, while Ivan Sidorenko had 500 confirmed kills. Both men used a Mosin-Nagant.

A fully automatic variant of the SVT-40, the AVT-40, was made but quickly discontinued as the lightweight rifle experienced violent recoil making it uncomfortable to use and difficult to control.

Some Finnish-captured SVT-40s were imported in the 1950s, and then in the 1990s the post-Soviet Russian Federation sold off the rifles in storage. The rifle can be spotted in Russian cinema but has been ignored by western movie makers. It has appeared in Call of Duty and Red Orchestra games.

More than 37 million Mosin-Nagant rifles have been manufactured since 1891. Several countries have made the Russian warhorse, even the United States. During World War I, Remington and New England Westinghouse made them for the Imperial Russian Government. Following Russian Revolution in 1917, the Bolsheviks defaulted on the order. For Remington and Westinghouse to avoid bankruptcy, the U.S. Ordnance Department bought about 280,000 rifles manufactured by the companies.

A Mosin-Nagant sniper style rifle. The bolt action rifle was used by Soviet soldiers on the Eastern Front during World War II.

In the United States, about 5.4 million semi-automatic M1 Garand rifles were made during and shortly after World War II.

The SVT-40 weighs in at 8.5 lbs. with a 10-round magazine, while its American cousin is 11 lbs. and uses an eight-round clip. Also, the Garand’s en bloc clip was more difficult to remove than the Soviet weapon’s clip. However, the SVT-40 was longer than and not as accurate as the Garand.

Production of the SVT-40 ended after World War II and the bolt-action Mosin-Nagant was phased out by the Russian military as the SKS and the AK-47 were seen as the future. The Mosin-Nagant stood in the Soviet arsenal as a sniper rifle until 1963.

Mosin-Nagants found their way to battlefields around the world. The Chinese and North Koreans used them during the Korean War and the Viet Cong carried them during the Vietnam War. They have been used in Egypt, Syria, Iraq, Afghanistan, and Palestine. Most recently, they’ve been reported used by insurgents on the asymmetrical battles of Iraq, Afghanistan, and even Ukraine.

The SVT-40 might not have gotten a chance to show what it could do as standard issue for the Red Army, but it proved itself as a capable semi-automatic rifle alongside the dependable bolt action of the Mosin-Nagant and the fatal spray of the PPSh-41 submachine gun.

Submit your bid for a SVT-40 to add a piece of World War II military history to your collection through Rock Island Auction’s Feb. 16-18 Sporting and Collector Auction. Add a bid for a Mosin-Nagant for Russian rifle bookends.