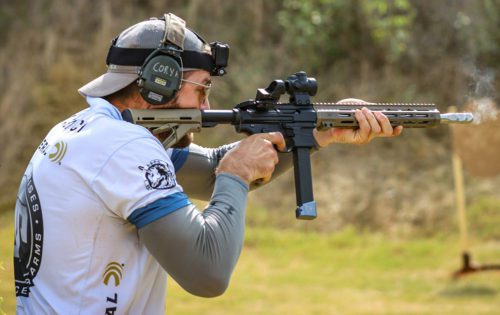 U.S.A. -(AmmoLand.com)- Team Federal had an impressive finish at the USPSA 2021 Walther Arms Area 4 Championship, recently held at the United States Shooting Academy in Tulsa, Oklahoma. USPSA Area 4 consists of Texas, Oklahoma, Louisiana, and Arkansas although competitors from around the world are able to compete. There were 305 shooters on hand competing in seven divisions – Open, Carry Optics, Limited, Single Stack, Production, Revolver, and PCC.

“In a major match like this, winning or losing can come down to a tenth of a second. Your ammunition has to be accurate and dependable in order to perform well,” said Federal Shooting Sports Promotions Manager Jason Spradling. “I’m proud that these team members rely on Federal Syntech Action Pistol to help them achieve their goals.”

“I was able to bring home another Area Championship win in Single Stack division with Federal Premium Syntech Action Pistol,” said Tim Herron. “I achieved my personal goal during this match which was to push my performance and finish as the highest overall of the low-capacity divisions of Single Stack and Production. What an outstanding match with a great squad!”

“It was great shooting with my Federal teammates and pushing each other to perform at our best,” said Grant Kunkel. “The transition from Steel Challenge to USPSA has been challenging and I’m proud to have earned a second place finish for PCC. I’m excited to go shoot USPSA Nationals next month.”

“The competition in the PCC division was fierce, and I was proud to be able to earn a sixth place finish in a stacked field,” said Cory Klemashevich. “There is no way to compete at this level if your equipment is not completely squared away. I know that I can trust my Federal Syntech ammunition to perform flawlessly every time.”

Syntech Action Pistol is specifically designed for action shooting sports and loaded to power factor requirements with heavy, flatter-nosed bullets for more reliable knock-downs on steel targets in competition. Like all Syntech loads, they feature the exclusive Total Synthetic Jacket (TSJ), which prevents metal-on-metal contact between the bullet and barrel, eliminating copper and lead fouling as well as reducing damaging heat and friction. Combined with clean-burning powders and the Catalyst lead-free primer, Syntech Action Pistol provides the softest shooting and most reliable performance possible for high-volume competitive shooters and is the official ammunition of USPSA.