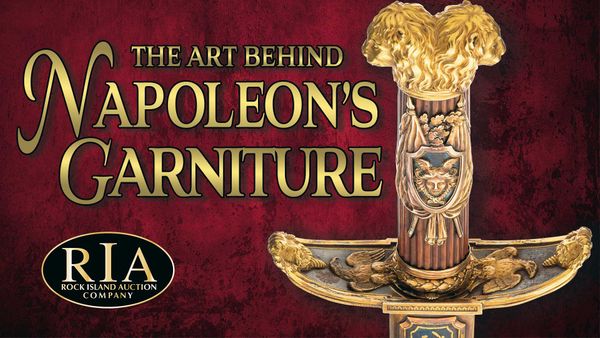 It’s easy to be overwhelmed by the impressive set of historical arms commissioned by the French Directory for General Napoleon Bonaparte in 1797. With the historic nature of the set, the legendary man it was made for, and the nearly full-coverage extraordinary embellishment by Boutet and the artisans of the Versailles Manufactory, you have one of the most significant pieces ever offered by Rock Island Auction Company.

The garniture’s incredible ornamentation alone is awe-inspiring, but when you take the time to examine and appreciate the intricate details and consider their meaning, you get a greater sense of how the various firearms and sword all tied together through classical imagery.

Greco-Roman symbols and designs recur throughout Napoleon’s garniture and bring a real sense of cohesion. The designs often compliment or reference one another, and many of them reflected Napoleon’s past and continued to hold significance into his reign as Emperor of the French.

Perhaps the most consequential and extensively used design element of Napoleon’s garniture is the repeated thunderbolt and lightning motifs also known as fulmen or iron fulmina. Like the golden eagles featured throughout the six-piece set, the thunderbolt motifs are references to Jupiter (Zeus in Greece), the king of the gods, who is also represented by masks in the garniture.

Roman God Jupiter with an eagle and fulmen in hand from the Louvre.

The fulmen and eagles (aquila) were used as symbols by the Roman Empire and its armies, notably by the Legio XII Fulminata. Napoleon was of Corsican and Italian noble descent and studied Ancient Greek and Roman leaders such as Alexander the Great and Julius Caesar, the latter of whom he is often compared.

The Father of Modern Europe

Napoleon notably came into prominence as the leader of the Army of Italy in the French Revolutionary Wars. It was for his victories in command of this army that he was rewarded with this garniture. The eagle has long been used as a symbol of victory, and it may also represent the Carolingian Empire of the early Middle Ages led by Frankish King Charlemagne.

Elements of the Imperial Coat of Arms.

After his rise to power and declaration of the French Empire, the golden eagle and fulmen were adopted by Napoleon as the central elements of the imperial coat of arms, and Roman-style eagles were also presented to his regiments as depicted in the painting ‘The Distribution of the Eagle Standards’ by Jacques-Louis David in 1810.

On the pocket pistols, there are a series of designs that coordinate with the fulmen motifs on the various arms. The frizzens have a scene of Jupiter’s fulmen being forged by Vulcan’s automatons. Vulcan (Hephaestus in Greek mythology), the Roman god of the forge, fire, and volcanos, is featured on the bottom of one of the pistols, and one of the animal scenes also depicts a volcano.

Vulcan was a son of Jupiter who forged the weapons of the gods and is thus a fitting symbol for a set of classically themed arms with fulmen motifs. There are also engravings of salamanders, which tie in with the Vulcan motifs as they were long believed to be drawn to forges and fire, or even born from the latter, in part because they often emerged from wood gathered for fires.

Another bird is featured on the barrels of the pocket pistols: roosters or cockerels. The roosters on the barrels of the pocket pistols are the Gallic Rooster, the historic national symbol of France that came back to prominence during the French Revolution as a symbol of the French nation rather than the state. It was the symbol later replaced by Napoleon with the eagle representing the empire, but the rooster has remained a French republican symbol.

Returning to the Greco-Roman designs, Hercules is represented on multiple pieces of the garniture, including his legendary club on the scabbard and an incredibly detailed scene on one of the pocket pistols. Hercules is arguably the greatest hero in ancient mythology and is famous for triumphing through strength, determination, and ingenuity and is thus a fitting figure to grace a garniture of fine arms presented to a victorious general like Napoleon.

Hercules battling the Lernean Hydra at the Hofburg Imperial Palace in Vienna.

Importantly, Hercules defeating the Hydra of Lerna is featured in Napoleon’s Five Battles series of medallions on the Millesimo-Dego medallion, which commemorates Napoleon’s victory at the Battle of Millesimo in 1796.

The lions prominently featured on the pocket pistols and the hilt are classic symbols of power, courage, strength, and other attributes of a successful military commander. They could also be seen as tying back to Hercules and his defeat of the Nemean Lion in the first of his labors, as he defeated the lion by clubbing it and then strangling it.

After defeating the mythical beast, Hercules used the lion’s claws to collect the impenetrable pelt which he then wore as armor. Other versions say the pelt he wore was that of the Lion of Cithaeron. Notably, there are multiple lions depicted on Napoleon’s garniture, and the hilt has two heads, perhaps representing both of these mythical lions.

A Gift for an Emperor

Wreaths and crowns made of oak leaves or laurel leaves were classical symbols of victory in the Roman Empire and were presented to successful generals after a battle. Different wreaths often had different meanings. For example, a laurel was reserved for commanders awarded “triumph”, making it a fitting symbol on a garniture presented to Napoleon Bonaparte in recognition of his victories in command of the Army of Italy.

A sword fit for a future emperor.

Additional motifs include the Gorgoneion/Aegis (a classic apotropaic/protective symbol), the Caduceus (classic symbol of commerce and negotiation), a cannon on one of the pocket pistols likely referencing Napoleon’s early position as an artillery officer, and grenade motifs. The fruit, flowers, cornucopia, martial trophies, and Bacchus (god of wine and festivity) are fitting for the celebratory nature of the set.

The “reeded” grip of Napoleon’s sword may represent a fasces. With further study, there are undoubtedly more interesting symbols and details to be uncovered on each of the individual weapons in the spectacular garniture. Nothing on a set of such historical significance would have been chosen at random.

The set as a whole fits the moment in time from which it originated. Elements of the more floral Rococo style popular in the late 18th century under the Ancient Regime appear on the garniture, but the Greco-Roman and military motifs foreshadow the Empire Style that dominated France under Napoleon and influenced the arts and arms making throughout Europe. These styles even appeared across the “pond” on arms engravings in the early 19th century United States.

Caesar Augustus with the Aegis on his shoulder.

Taken as individual pieces and especially as a complete set, the Napoleon garniture is a masterpiece of fine art in steel, gold, and walnut executed by some of the best artists of their trades in the day. There is certainly as much for a lover of high art to enjoy in this set as there is for a fine arms collector, a student of history, and anyone hoping to preserve one of the crown jewels of the 19th century.