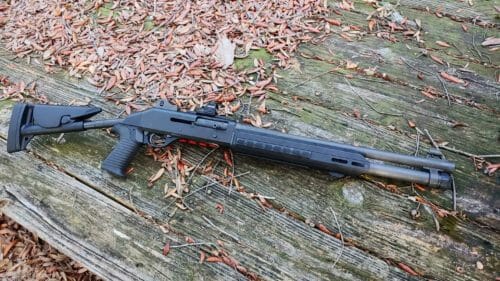 U.S.A -(AmmoLand)- Back in 1999, the United States military wanted a new joint service combat shotgun. They had numerous requirements for the new shotgun. They wanted semi-automatic operation, the ability to add optics without affecting reliability, and obviously, it needed to be a 12 gauge. The Marines were tasked with leading the competition, and in the end, they chose the Benelli M4 Super 90 shotgun. It would be christened the M1014 Joint Service Shotgun, and the M1014 arrived just in time for the Global War On Terror.

In that war, the M1014 would see plenty of action in environments like Fallujah in Iraq and Mianposhteh, Afghanistan. Benelli has also made the M4 available to you and me through importation, and for a pretty penny, you can get your own gas-operated fighting shotgun. Unfortunately, due to 922 R and the ATF, we can only get a quasi neutered version of the gun imported.

Mine came with a fixed stock and five round tube. To legally return the M4 to its glory, I went with Freedom Fighter tactical to obtain the American-made parts necessary to validate 922R. This includes an American-made seven-round tube and Mesa Truckee handguard. With the tube, handguard, the Benelli three-position stock, and a few other parts and pieces, I had what I considered a proper combat shotgun.

Inside the Benelli M4

The Benelli M4 was the first Benelli to move away from the famed inertia system the M1, M2, and M3 utilized. The ARGO system, in particular, was quite revolutionary. This dual gas piston design required very little maintenance and eliminated the need for linkages which simplified and lightened the design.

The Benelli M4 holds five rounds from the factory, and with the proper tubular magazine, it holds seven rounds. The controls include a charging handle on the right-hand side, a bottom loading port, and a right-side ejection port. The safety is a crossbolt behind the trigger, and the bolt release is placed slightly below the ejection port. The only downside ergonomically for the M4 is that dang bolt release. It’s too tiny.

The gun comes with a plastic, two-piece handguard which is completely sufficient but does not offer mounting capabilities. Additionally, the M4 comes with ghost ring peep sights and an optics rail. I replaced the optic’s mount with a Scalarwork Sync mount and attached a Holosun 507C. The M4 variants come with replaceable chokes in the Benelli/Mobil pattern.

I love a good semi-auto shotgun. Something about delivering payloads of shot per trigger pull is just so satisfying. The Benelli M4 delivers a very rapid action that fires, extracts, ejects, and loads in the blink of an eye. You can chew through five or seven rounds of 12 gauge in very quick order and in a very satisfying way.

The Benelli M4 allows you to fire a rapid follow-up shot or two, or three. This ensures you can put a second shot on the threat or rapidly transition to a second target. Sometimes even 12 gauge shotguns need a follow-up shot.

When you think shotgun, you think lots of recoil. Don’t think that way about the Benelli M4. The gas-operated ARGO system takes some sting out of a load of 12 gauge buckshot. In fact, it makes it downright comfortable to fire. With some good old-fashioned push/pull, you can take even more sting out of the gun. This allows you to make proper use of the M4’s rapid firepower.

Shotgun accuracy is an interesting topic. It’s a shotgun firing loads of shot. Accuracy isn’t measured in groups or at long range. I will say that the Benelli M4 offers an awesome set of iron sights that allows you to adjust the sights right where you want to put buckshot.

I can put a load of Federal FliteControl between the eyes of a threat at 15 yards with ease. With some Hornady slugs, I can easily ring a steel IPSC target over and over at 50 yards.

Well, it definitely should with an MSRP of more than $2000 or so. The Benelli M4 chews through any standard length shell I’ve put through it. Outside of those super low-powered trap shells, the Benelli M4 eats everything. This includes low recoil buckshot and reduced recoil slugs.

Low brass, high brass, it doesn’t matter. The Benelli M4 eats through the cheapest loads of birdshot from Walmart, as well as high-end defensive loads from Hornady and Federal. The Benelli M4 is most certainly a reliable shotgun.

From the Halls of Montezuma

The Marine certainly chose right when they put the Benelli M4 to task. It’s easily one of the best combat shotguns ever made. Even after 20 years of service, the Benelli M4 has remained one of the most capable weapons in the Marine Corps arsenal, and it’s my personal favorite shotgun. It’s not a cheap weapon, but it’s a well-made, easy-to-use, accurate, and superbly reliable shotgun.

Travis Pike is a former Marine Machine Gunner, a lifelong firearms enthusiast, and now a regular guy who likes to shoot, write, and find ways to combine the two. He holds an NRA certification as a Basic Pistol Instructor and is the world’s Okayest firearm’s instructor.