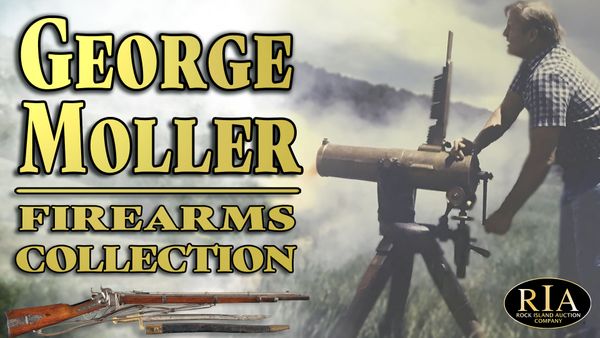 George Moller, renowned author and longtime friend of Rock Island Auction Company, assembled the most complete collection of primary issued U.S. shoulder arms in private hands. A bona fide wish-list of scarce and desirable firearms, Moller’s collection contains examples from every era, including numerous rarities that are absent from even the most advanced private collections and public institutions.

George passed away this past March, leaving behind an immense legacy as an author, historian, and a leader in the world of fine arms collecting. Remembered by the firearms fraternity as a gentleman collector, he was an absolute titan in his field, a man who was dedicated to the preservation of history for ages to come.

A look inside Moller’s world-class collection.

It has been Rock Island Auction Company’s great privilege to offer Moller’s historic assembly of arms to the public and present his collection with the honor it deserves. December’s Premier Firearms Auction marks the final offering of this illustrious collection, nearly four hundred world-class firearms from across the centuries going up for bid.

As a member of the prestigious American Society of Arms Collectors, and past president of the Colorado Gun Collectors Association, George Moller was an active member of the historic arms community, but he is perhaps known even better by his written works. If one has any interest in U.S. martial shoulder arms prior to 1865, George D. Moller’s books “American Military Shoulder Arms”, Volumes I, II, and III are an absolute must.

Each volume of Moller’s work illustrates the story of American military arms in vivid detail, covering the colonial era, the flintlocks of the Revolutionary War, the percussion era, and the breech-loading alterations through the end of the Civil War. Many of the exact guns photographed and described in Moller’s books are available for bid this December.

In many ways, George’s writing drove his collection, and his collection inspired his writing. As a potential bidder for the upcoming December Premiere Auction, Moller’s books can be used as a shopping list of sorts for anyone hoping to acquire a rare piece of military history. Let’s take a look at just a few of the many Moller Collection highlights from December’s Premier Firearms Auction.

Though not a shoulder arm, Dr. Richard Gatling’s “Battery Gun” is one of the most well-known pieces of 19th-century weapons technology and an example of just how expansive Moller’s collection was. As a collector for over 70 years, George Moller acquired a museum’s worth of fascinating firearms, and this 1877 Bulldog Gatling Gun, with its original Henry Nettleton-inspected oak tripod, is a rare treasure indeed.

Designed to increase the amount of firepower a small group of men could unleash, the Gatling Gun has been called the predecessor of the true machine guns that rose to prominence in the years leading up to WWI. George Moller frequently wrote about transitional firearms, and the 1877 Bulldog is a dramatic example of how the industrial age completely changed the face of warfare. The oak tripod is one of one 12 that were accepted through the inspection process.

George spent so much time building his extensive, archive-like collection because he was dedicated to preserving firearms history, including high-end rarities like the experimental weaponry of John D. Pedersen. A complete U.S. Springfield Armory 1903 Mark I rifle rig with a Mark I Pedersen Device is a standout in any gun collection, and this fine condition example from George Moller includes an even scarcer mix of original accessories.

A Springfield Model 1903 Mark I rifle with the Pedersen Device.

Like many of the pieces in Moller’s collection, the Pedersen T2 series was an intriguing experiment in arms technology. Pedersen created the original T1 rifle to compete with Garand’s primer actuated prototype, and while the British showed some interest in Pedersen’s T2 design, both incarnations were eventually bested by the famous M1 Garand.

Another Pedersen design, as well as a worthy addition to George Moller’s impeccably thorough collection, the Pedersen Model GY self-loading prototype rifle was chambered for the .30-06 cartridge and combined features from both the M1 Garand and the T1 series. Only three examples of this prototype model are known at the time of writing. Serial number 3 is displayed in the Springfield Armory Museum. Serial number 5 was sold six years ago by Rock Island Auction Company for $74,750. The example featured in December’s auction, serial number 4, was purchased from John Pedersen’s son in 1988 before finding its way into the prestigious Moller Collection.

Unfortunately, George D. Moller’s last book, ‘American Military Shoulder Arms Volume III’ ends with the late Civil War era. Though Volume IV was never completed, Moller certainly acquired a surplus of 20th century American long guns in preparation. Many of these were photographed in other noted publications, such as this Model 1903 Springfield rifle and Cameron-Yaggi Device, a rare artifact from WWI.

The Cameron-Yaggi Device was designed to let an infantryman engage targets from a trench without exposing themselves to enemy fire.

George had an eye for rare firearms that could rival anyone else in the business, so his inclusion of an M1903 with a scarce experimental Moore silencer in his collection should pose as no surprise. Only one hundred of these improved Moore silencers were purchased by the Ordnance Department for issue, making this mechanically excellent M1903 variation another must-see in December’s auction.

One can infer that Moller had the foresight to fill holes in his collection so he could include them in planned future works. A gun like this Springfield Model 1903 rifle fitted in the ‘1942 USMC Sniper’ configuration would certainly be consistent with a collector hoping to one day publish a volume that included the innumerable variations found within the 1903 genre.

Moller started with Springfield Armory arms when he began collecting early in life, acquiring 15 guns by the age of 15. He steadily expanded his collection as the years passed, including rare pieces from the famous Springfield Armory like this Officer’s Model 1875 rifle.

Even more scarce than the 1875 Officer’s Model is this experimental U.S. Springfield Model 1870 rolling block carbine. Moller’s collection was a huge piece of his life, and the research and determination to acquire every experimental prototype and transitional model to complete the puzzle was an impressive feat.

George Moller spent an insurmountable amount of time measuring every little detail in his guns, describing every stamp and feature, why things existed, why the military transitioned from one model to the next. Experimental trials rifles like this 1882 Springfield trapdoor with a special friction fit breech block was a perfect candidate for Moller’s meticulous eyes, and a desirable piece for any firearms collector today.

Like many collectors, George Moller was interested in the Civil War. Creating a ‘complete’ collection of U.S. Military shoulder arms included scarce repeaters like the Henry Rifle, a new technology on the 19th century battlefield. George seemed to have a sixth sense in knowing which gun he needed next to complete a set, relying on meticulous research and a lifetime of acquired knowledge to produce his works long before convenient tools like the internet were around.

No top-tier Civil War collection would be complete without the Spencer, and Moller acquired numerous fine examples like this U.S. Navy Spencer repeater with a saber bayonet. Only 700 in this pattern were ordered by the Navy, making it one of the rarer pieces of U.S. militaria and a highly valued collector’s piece.

The vastness of Moller’s collection as well as the level of detail exhibited in his publications is truly unmatched. As the only Model 1855 Navy rifle with a still functional Rollin White self-cocking mechanism, and only 1 of 50 produced that year, this variation of the famous Sharp’s Rifle is another Moller Collection standout.

Another piece of Civil War history, this 1859 Sharps New Model rifle served in the famous Berdan’s Sharpshooters regiment, the Union’s elite group of volunteer marksmen who targeted enemy officers from afar. Each item in the Moller collection tells its own story, and the Berdan Sharps embodies the ideals of courage, discipline, and advanced marksmanship that we associate with elite military units today.

Every advancement in firearms history is an attempt to solve a problem, and the Hall Rifle is a textbook example of that point. As the U.S. military’s first breech-loading rifle that enabled reloading from the prone position, the Hall Rifle had numerous advantages over muzzle loaders. George Moller acquired one of the most comprehensive selection of Hall rifles around and covered their numerous variants and prototypes in his books.

Moller’s impressive array of Hall Rifles extended back to the flintlock era. In 1819, the U.S. War Department contracted John H. Hall for 1,000 of his innovative breach loaders, including this exceptionally fine example, which is pictured in Moller’s book, ‘American Military Shoulder Arms, Volume II.’

The United States was built on manufacturing and innovation, and the changes in the Hall Rifle reflect the increasing role of industrialization in firearms development. Later models include fewer parts and greater interchangeability, and Moller’s second book is one of the definitive reference pieces on the rifle’s evolution.

George Moller’s collection included more flintlocks than many museums carry, and he actively documented both U.S. military arms and their period rivals, like this 18th century German Hessian Jaeger rifle. As a rare example of a jaeger rifle attributed to one of the earliest elite Hessian sharpshooter units, this would make for a prized centerpiece in any early martial arms or Revolutionary War era collection.

Each piece of the Moller Collection contains an immense amount of historical value, and the guns featured in the early pages of George’s first book are some of the most intriguing. George notes that this 17th century Wheelock was likely intended for mounted use, and goes on to describe it’s various markings and features in his typical methodic detail.

To build a truly ‘complete’ antique military arms collection, the matchlock would certainly need to be included. George Moller lists this example as a ‘Suhl Spanish Butt Musket, Circa 1602.’ Suhl, he wrote, was a major source of muskets for numerous European countries at the turn of the 17th century, making this fascinating piece one of Moller’s earliest guns chronologically.

The Last Chapter of the George Moller Gun Collection

George Moller assembled one of the largest firearms reference libraries in private hands, creating an invaluable teaching tool for students of early military long guns and immortalizing each firearm in his published works. Moller laid the groundwork for future gun collectors, documenting even the most elusive historic rarities in his extensive body of written work. His knowledge was vast, his assembly of antique arms was unrivaled, and this December you can own a piece of that very collection.

The examples we’ve touched on here only scratch the surface of what Moller’s collection offers. Rock Island Auction Company’s December 3-5 Premier Firearms Auction presents the final chapter of George Moller’s collection to the public. The grand finale. The last hurrah.

Nearly four hundred of George’s firearms are up for bid, a tremendous variety that spans genres and generations. Share the excitement and enthusiasm George had for historic military long guns by attending Rock Island Auction Company’s Preview Day on December 2nd and examine these spectacular pieces firsthand.

“Do not destroy the value of your firearm. You don’t refinish it. You don’t polish it up. You can clean it, but that’s as far as you go. It’s going to be around a lot longer than the collector will.”  –    George Moller

As always, we’re happy to answer any questions regarding consignment, registration, or future auctions. Our auction schedule is updated frequently on our website, and our new custom catalogs make it easier than ever to prepare for any upcoming auctions, so be sure to go through the listing and start making your plans to visit. All our events adhere to the latest COVID-19 guidelines.