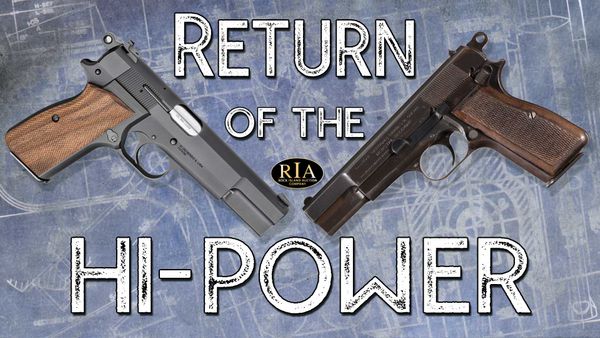 Samuel Colt, Eli Whitney, John Garand, and Eugene Stoner: these men are part of the pantheon of notable firearm designers. They do not sit alone atop this figurative Olympus, as there have been important designers from many countries and ages. To this author at least, there is one man seated amongst them who should be seen as the Zeus of this group. This man is none other than John Moses Browning.

Browning’s designs revolutionized the science of the firearm, and his work influenced designs both civilian and martial. Spanning several decades, manufacturers, and even continents, John Browning’s genius can still be seen today in the likes of the Colt 1911 and the Winchester 1894. While I would love to wax poetic about the man himself, that is not the intention of this article. Instead, we’ll be lavishing praise on what I consider to be Browning’s magnum opus: the Hi Power.

The Hi Power (the spelling of which has varied over the years) was first conceived under a French military contract that sought to provide troops a new sidearm, one that could deliver Grande Puissance: or Hi Power. Browning borrowed heavily from his earlier 1911 design but modified it to stay within the requests of the French contract.

The most important requests in the contract were high magazine capacity, and a magazine disconnect. Neither feature was part of the 1911 design, and Browning would have to get creative.

Sadly, Browning died before his project could be completed, but a man by the name of Diedonne Saive took the design to the finish line. It was his genius that led to the inclusion of a 13-round double-stack magazine to cram in as much 9mm as possible. Thus, between Browning and Saive the Hi Power was born.

Interestingly enough, the Hi Power was never adopted by the French, but the Belgians saw the promise in the novel design, and Fabrique Nationale soon began producing the pistol for their military. Since then, the Hi Power pistol saw prominent use by many military forces including the Germans after they overran Belgium during WII.

A Fallschirmjäger soldier carries a German Hi Power (The Pistole 640(b)) as his sidearm.

In May of 1940, the German Wehrmacht invaded Belgium as part of Operation Fall Gelb (Case Yellow), forcing the Belgians’ surrender within 18 days. The Nazis seized the Fabrique Nationale Plant in Liege and resumed production with their own technicians and forced labor, as much of the Belgium staff had fled.

Some of the former employees sent notes and blueprints to Canada, where the John Inglis Factory undertook production of the Hi Power pistol for the Allies.

Called “Pistole 640(b)” by Germany, the German Hi Powers were used prominently by the Waffen SS and the Fallschirmjäger. Today, the German early war production models are highly sought-after collector guns.

The Hi Power pistol also saw success in the civilian market and saw new production by Browning until 2018 when its life was unceremoniously cut short. We, as consumers, miss this pistol. We read about it in articles, see it used in movies and on TV, and read about its battlefield exploits, and are saddened that we can’t buy one new-in-box. Then, suddenly, our cries were heard and our wishes granted when this year Springfield Armory announced production of what they call the SA-35, a new and improved Hi Power.

At first, I was hesitant to get too excited. Some Turkish firms had been making Hi Power clones but the dodgy quality gave many pause. But after reading early reviews on the SA-35, my mind was put at relative ease. Everything I had read was absolutely glowing, and much of this praise stemmed from some upgrades Springfield made to the Hi Power platform.

The company completely removed the much-derided magazine disconnect, producing a noticeably cleaner trigger pull. The original design including the disconnect made for a trigger pull that many referred to as “gritty”, one of the few objective gripes about the loved platform. As well, Springfield redesigned the grip tang, intended to reduce “bite” from the hammer, another gripe about the original platform.

When the shooter’s hand was choked up on the grip, they often experienced “bite” on the web of their hand when the hammer moved. Now, as a man with a modicum of grit that strikes me as semantics, but I don’t know because I have not had the pleasure of using an original Hi Power at the range. Regardless, that issue is remedied entirely by Springfield.

My local gunshop (shout out to Davenport Guns) has an SA-35 Hi Power on the shelf as a display model, and the shop’s currently taking pre-orders, so you KNOW my name is on that list. I already own a Springfield Ronin 1911 in 9mm, and have had no issues with it whatsoever; I have faith in the company’s manufacturing abilities.

My decision to spend money was cemented after I was able to handle the display model. The fit and finish are superb, and it feels like a proper Hi Power. And for an MSRP of about $700, you really can’t go wrong. What Springfield is doing is fantastic, and is filling a void in the hearts of many shooters out there. But what about the collectors? The guys who want a piece with some bonafide history behind it. That’s where Rock Island Auction comes in.

Whether you are looking for a Hi Power with German markings, a Canadian Inglis with removable stock, or a civilian market Browning model: RIAC has you covered, and at just about any price range. If it were my money, I would be bidding on lot #6, a beautiful Hi Power Centennial in our upcoming A&A Day auction on January 12th.

Alternatively, if you are looking for a piece with a bit more of a military pedigree, Lot #4371 might be an ideal choice. Pre-WWII, and featuring tangent sights, this pistol is perfect for the military collector.

In that same vein, our December Premier Firearms Auction offered one of my personal favorite variants of the Hi Power: lot #644 is a Pre-Occupation FN Hi Power, featuring a detachable stock, for when you really need the stability to push that 9mm cartridge as far as it can possibly go.

Made in Belgium before the German invasion in 1940, this fine condition FN Model 1935 included a rare shoulder stock.

In my experience at Rock Island Auction Company, Hi Powers have only increased in price in the past few years, across all auctions. Who doesn’t want to get their hands on a tried-and-true platform that serves its purpose as well today as it did almost a century ago? In my opinion, the Hi Power is a lot like a katana: an extremely lethal battlefield tool that maintains a level of beauty by design.

A chart that shows the average prices of Hi Power pistols sold during the 2021 A&A auctions, including both FN and Browning models. The scarce, finer condition Hi Powers found in RIAC’s Sporting & Collector Auctions command an even higher price point.

Not to knock Mr. Browning’s prior designs, but the 1911 genre has a brutish aesthetic when compared to the Hi Power. To maintain my weapons similes, the 1911 is more like a war-hammer: it’s heavy, cumbersome, and not very pretty but it will get the job done. At the end of the day, I’ll choose form AND function if the choice is available to me, and that’s one of the many reasons classic Hi Power pistols have seen their values rise in recent years.

I’ve jokingly referred to the Hi Power as the 1911’s prettier cousin. I think what Springfield is doing by releasing the SA-35 is doing the firearms world well. In an environment of polymer Wonder-Nines, seeing a classic come back with as much fanfare as the SA-35 commands brings a smile to this writer’s Glock-weary face. And like with the 1911 platform, a new Hi Power on the market only creates more interest in its classic predecessor.

So if you get the opportunity, go check one out and see what you think. Then, if you feel so inclined, check out some of our upcoming auctions and get yourself an original. The gun collecting market is booming, and 2022 is a great time to buy. And if Rock Island Auction’s 2022 catalog so far is anything to go by, this year is going to be phenomenal for firearms fans across the board.

2021 was a groundbreaking year for Rock Island Auction Company, and 2022 promises to offer even more fantastic collector pistols.

If there are any questions regarding consignment, registration, or future auctions, please contact Rock Island Auction Company today. Our auction schedule is frequently updated, and our new custom catalogs make browsing the latest offerings a breeze. RIAC already has a fantastic slate of auctions lined up for 2022. We can’t wait to see you here!