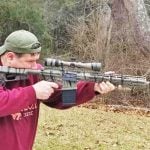 
The United States military was late to the assault rifle game. Yes, I know that’s a controversial term, but what else am I going to call them? The American M-16 wasn’t adopted until 1964, fifteen years after the Soviet AK-47. The M-16 was a new design, but its battlefield role had already been filled for over two decades by an unlikely firearm: the M-1 Carbine.

A light rifle chambered for an intermediate cartridge wasn’t a new concept. Russian gun designer Vladimir Federov produced an automatic carbine chambered in the Japanese 6.5mm cartridge in 1916. World War II saw the Germans field the StG 43 and StG 44 Sturmgewehr in the 7.92×33. The German term Sturmgewehr (Storm Rifle) is the origin of the “assault rifle” label. Mikhail Kalashnikov tested his first AK prototype in 1946.

The idea was to provide infantrymen with a lighter rifle chambered in an intermediate cartridge. Most infantry combat took place within a few hundred yards. Full sized battle cartridges like the 8mm Mauser and 7.62x54R weren’t necessary. Soldiers could carry much more ammo for the new rifles, thus increasing their firepower, especially with a detachable magazine select fire weapon.

The US Army launched its search for a lightweight, smaller caliber rifle in 1938, but for a different reason. Americans traditionally liked powerful, large caliber weapons. The Colt 1911, 1917 Service Revolver, 1903 Springfield, 1917 Enfield, and M-1 Garand were testaments to that philosophy.

The Winchester-designed M-1 Carbine eventually won the light rifle competition in 1941. The 18-inch barrel made it handy, and it only weighed 5.2 pounds. The 15-round detachable box magazine combined a high rate of fire with a generous capacity for the time. The .30 Carbine cartridge was small, light, and had adequate energy out to 150-200 yards. It was also non-corrosive, unlike the 30.06 ammo of the time.

But unlike the European models, the Carbine aimed to replace the 1911 pistol instead of a battle rifle. The Carbine was intended for armored crewmen and support troops such as mortarmen, artillerymen, and truck drivers. So, the .30 Carbine is more like a beefed-up pistol cartridge than a cut down rifle round. The straight-walled casing can’t pack the same powder load as the 7.92×33 or 7.62×39. No one even considered replacing the 30.06 Springfield as the premier rifle round.

The Carbine was an instant success, despite occasional feeding issues mainly caused by cheap magazines. The lightweight gun soon attracted the attention of the fledgling airborne divisions, who saw its advantages over the heavy M-1 Garand. The resulting M-1A1 Carbine, complete with pistol grip and folding wire stock, debuted as a combat rifle in July of 1943, when it jumped into Sicily with the 82nd Airborne.

The M-1A1 wasn’t quite an assault rifle since it didn’t have a select fire option, but the paratroopers used it like one. They could jump with a lot more ammo and the fifteen round mag capacity gave them a significant firepower boost. But some soldiers complained about the lack of stopping power. The .30 Carbine round is, after all, a glorified pistol round. But that didn’t
counteract the Carbine’s many advantages. When Allied forces invaded Italy and France, the Carbine went with them as an integral part of the standard infantry company.

The Carbine’s success led to 1944’s M-2 version featuring a select fire capability. The original design was supposed to have it anyway, but the suddenness of Pearl Harbor forced it into production before that part was developed. But the appearance of the StG 43 and 44 spurred a return to the concept. The Carbine only needed small internal changes and a selector switch. New 30-round mags were added to leverage the M-2’s 700-750 round rate of fire.

The M-2 only entered production in April of 1945, right as the war in Europe was ending. But conversion kits were sent ahead, and some field armories upgraded their existing M-1s. The M-1 and M-2 Carbines were used in the Pacific, where the non-corrosive ammo was a big hit. The M-2 saw action in the Philippines and Okinawa. The Pacific saw the same complaints about
stopping power, though the guns were popular for their other characteristics.

The M-2’s impact on World War II was limited thanks to its late entry. But it served throughout the Korean War and even Vietnam with US Special Forces soldiers and the South Vietnamese and South Korean Armies. The M-16 superseded the Carbine in US inventories, but it was used in the “assault rifle” role from its introduction until its eventual retirement.

The M-3 Carbine: Shades of the Future

The M-3 (also called the T-3) was an M-2 equipped with an infrared night scope. The M-3 first deployed on Okinawa, allowing American troops to effectively counter Japanese nighttime infiltrators for the first time. The night scopes were large and heavy, using a large backpack battery and requiring a two- or three-man team to operate. The blurry greenish images were good enough for the 150 M-3s on Okinawa to account for about 30 percent of Japanese casualties during the three-month battle.

Yes, the Carbine Can Be Suppressed!

The Carbine is a good candidate for suppression, with a couple of considerations. First, authentic carbines aren’t cheap. Even old beaters will cost you many hundreds of dollars. That’s just how the military surplus market is these days. If you pay a premium for a Carbine, do you want to kill its value by moving, or removing, the front sight and threading the barrel? Maybe, but that’s up to you.

Happily, there are new manufacture “tacticool” carbines available with threaded barrels, Picatinny rails, and all kinds of goodies. Those new Carbines have all the advantages of the original. They’re light, handy little rifles with the added plus of being tricked out for the 21st century. The Carbine’s handguard design makes it easy to replace with an aftermarket version
with a Pic rail if you just want to upgrade your old model without killing the value.

Be aware, however, that your suppressor choice is important. Despite not having a straight blowback operating system, the Carbine is gassy. At first glance, the SilencerCo Omega 300 or Omega 36M seems like a no-brainer. But tests I’ve seen indicate that a larger, pistol caliber model filters the gas better. My call for the Carbine would be the Hybrid 46M. Its modularity gives you lots of options and you won’t get a face full of gas when you shoot.

The M-2/ M-3 Carbines weren’t true “assault rifles.” But they foreshadowed the mission that the M-16/M-4 family of rifles has fulfilled for the last sixty-odd years. Even the original M- 1 exhibited some of those features once it was adopted by the World War II airborne divisions.

The American love affair with large caliber weapons meant the Carbine took a different path to the battlefield than the Sturmgewehr and AK-47. The Carbine unintentionally filled the gap between the battle rifle and assault rifle concepts. The Soviets bridged that gap with the SKS carbine, but the AK-47 followed only four years later.

The M-14’s brief adoption shows that the US military was behind the times, considering it entered service a full eight years after the AK-47. The early days of Vietnam emphasized the AK’s superiority over the Carbine and the M-14.

Nevertheless, the Carbine served far beyond its initial purpose, and it served well. Around seven million Carbines were built during and immediately after World War II. They have been shipped to militaries and police forces around the globe and some still serve those agencies today. Not bad for a rifle designed to replace the sidearm for support troops.

William “Bucky” Lawson is a self-described “typical Appalachian-American gun enthusiast”. He is a military historian specializing in World War II and has written a few things, as he says, “here and there”. A featured contributor for Strategy & Tactics, he likes dogs, range time, and a good cigar – preferably with an Old Fashioned that has an extra orange slice.