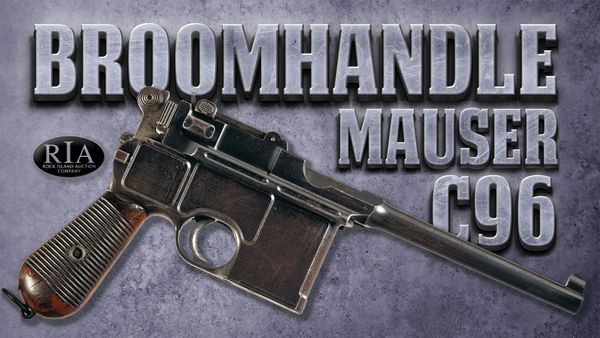 A broomhandle-shaped grip. A box magazine in front of the trigger. A long, slender barrel. The Mauser C96’s unique silhouette makes it one of the most standout pistols in gun collecting.

The exotic look of the Mauser C96 made it a favorite in the entertainment industry, with author Ian Fleming depicting Mauser pistols as the preferred sidearm of the sinister SMERSH agents in the James Bond series, and the Mauser played a prominent role in Clint Eastwood’s 1972 Western, ‘Joe Kidd.’ Today, the C96 can be found on screen in period dramas like Peaky Binders, and most modern audiences will recognize the Mauser pistol as being the basis for Han Solo’s DL-44 Heavy Blaster in the iconic Star Wars films.

When was the Mauser C96 Made?

The Mauser self-loading pistol is known by many names, slangs, and designations. The Broomhandle. The Pistole 7.63. It’s most common moniker today, the Mauser C96, refers to its first year of production in 1896.

The C96 was the brainchild of three brothers employed with Mauser – Fidel, Freidrich, and Josef Feederle. Though company co-founder Paul Mauser initially dismissed the Freederle design, the concept slowly grew on him, especially as he realized Mauser was falling behind in the race to bring a self-loading pistol to market that could compete with new inventions like the 1893 Borchardt.

From its factory in the picturesque German town of Oberndorf, Mauser began testing the Mauser C96 (Construktion 1896) in March of 1895. Originally dubbed the “Mauser Military Pistol” as a marketing strategy, the C96 was never officially adopted by any major power. Though the Mauser C96 saw limited military purchases from countries like Italy, Turkey, and Persia, the pistol found overwhelming success on the commercial market instead.

The Mauser C96’s “Broomhandle” nickname caught on in the English-speaking world, a reference to the gun’s round wooden grip. The Broomhandle moniker quickly became a catch-all term for the entire series of pistol models manufactured by Mauser and its eventual foreign copycats.

Though the Mauser C1896’s unique pistol grip was far from the gun’s only standout characteristic, the Broomhandle slang became too popular to ignore or rebrand. It was eventually embraced by Mauser in some countries and even used in official marketing. In China, a different nickname emerged that highlighted one of the pistol’s other distinctive design elements— the “Box Cannon.”

China’s “Box Cannon” colloquialism referenced the Mauser C96’s rectangular internal magazine, a unique feature of its silhouette. Rounds are fed from a stripper clip into the Mauser pistol’s box magazine, which is located in front of the trigger mechanism.

The Mauser 96’s clip-fed, top-loading internal box magazine system was functional, but the intricate set of internal processes that had to be performed before a round was safely fired was a complex undertaking for the time.

Similar to many semi-automatic designs since, the Mauser operated as a short recoil system. The C96’s rectangular slide was machined as a one-piece unit with the barrel. When a cartridge is fired, the Mauser’s locking assembly beneath the barrel seals the breach through a one-piece steel block with a locking lug that engages a slot in the lower surface of the bolt.

The recoil drives back the bolt, which is locked to the barrel extension by the bolt lock. The bolt block pivots downward to disengage the lugs and allows the bolt to travel rearward to carry out the cycle of extracting and ejecting the spent round casing; automatically reloading and recocking the weapon courtesy of a return spring.

An intricate process for the time, and the Mauser C96 had some issues in field testing. The numerous hand-fitted parts required to achieve this design were also expensive and led to the Mauser pistol being favored more by officers, generals, and the wealthy elite.

The most common accessory for the Mauser C96, as well as its most famous, is the pistol’s combination holster stock. These stocks were offered in variations that ranged as widely as the pistol itself, from a simple wooden holster to more elaborate military models that included provisions for a cleaning rod and an extra magazine spring.

When not holstering the pistol, these combination stocks could be attached to the Mauser C96 and transform the weapon into a pistol carbine that could be fired from the shoulder. This was a popular option, given that the C96’s 7.63x25mm Mauser cartridge was considered the highest velocity commercially manufactured pistol cartridge of its era, a flat-shooting round known for its power and accuracy.

A Mauser C96 with a leather covered military holster stock with cleaning rod.

One of the strengths of the Mauser C96 design was its adaptability. Experimenting with the C96’s external configuration was common practice, as illustrated by the various combinations of barrel length, magazine capacity, and different styles of sights and hammers produced. One of these variations evolved into a full-fledged automatic machine gun model, the M1932 Schnellfeuer.

A German and a Chinese Mauser C96 pistol.

The Mauser C96’s potential for adaptability led to several notable variations, including unlicensed Chinese and Spanish knockoffs produced in massive numbers. We’ll take a closer look at the Chinese Mauser variation, as well as several of the more well-known historic Mauser types, the Bolo Mauser and Mauser Red 9.

The German military rejected the Mauser C96 in favor of the Luger P08, which they felt was sturdier and better balanced. However, when WW1 broke out, Luger was unable to meet the production demand, and the Imperial German Army turned to Mauser to fill the gap.

150,000 Mauser C96 pistols were ordered for the war effort, and these were designed to be chambered in the more common 9mm Parabellum cartridge, the same round as the Luger. A large ‘9’ was carved into the grips of each of these German Army contract pistols, and the number was filled in with red or orange paint to make them easy to distinguish from the standard caliber C96s. Considered to be a substitute for a light carbine, the Mauser Red 9 pistols became popular weapons in trench warfare.

With only about 100,000 Mauser Red 9s being accepted and issued by the German Army, they’ve become one of the most sought after Mauser C96 variations.

Germany’s defeat in WW1 temporarily halted production of the Mauser C96. The Treaty of Versailles placed severe restrictions on German weapons production, and Mauser reworked large numbers of C96s to conform to these new specifications. The C96’s barrel was shortened from 5.5 inches to 4 inches, the grip frame was reduced, and the adjustable rear sight was replaced by a fixed rear sight. This configuration became known as the ‘Bolo’ Mauser.

There’s no single agreed-upon story for why this variation of the Mauser C96 came to be known as ‘Bolo’. Perhaps the most established theory behind the name suggests that Bolo is short for ‘Bolshevik’, a reference to the popularity the Bolo Mauser found with the Bolshevik government of Russia in the 1920s. The Bolo Mauser’s shorter barrel and smaller overall size certainly made the pistol easier to conceal for police officers and covert forces. Whatever its true origin, the Bolo name has stuck.

Since the formation of the Chinese Republic in 1911, China became plagued with internal conflict. Countless political factions vied for power, warlord generals controlled entire cities, and a fragile central government was struggling to exert control. To a gun manufacturer like Mauser, it was a perfect opportunity.

Mauser shipped hundreds of thousands of C96 pistols to China, but even that wasn’t enough to satisfy demand. Unauthorized Chinese copies started to appear by the tens of thousands, and these knockoffs eventually outproduced the Mauser originals.

Due to the frequency of .45 ACP caliber ammunition in China, where a popular copy of the Thompson sub-machine gun had also emerged, both the Mauser-produced C96 pistols and their unauthorized Chinese counterparts were often chambered in a .45 ACP variation. Even with so many knockoffs, Mauser continued making exports to the Chinese market until Japan joined the Axis Powers in 1936.

Why was the Mauser C96 Discontinued?

By the mid-1930s, over one million Mauser C96s were scattered throughout the world, making the Broomhandle Mauser’s most successful pistol. Unfortunately, the C96 was a product of 1890s technology, and several more affordable and mechanically simpler designs were gaining traction across the globe.

World War I German DWM “1918” Date Luger, one of my many competitors the C96 faced from the early 20th century onward.

The adoption of the P08 Luger by the German military was just the first of many cheaper competitors that would challenge the C96 Mauser’s market share. With options like the Colt 1911, the 1907 Savage, and the FN Model 1910, the Broomhandle began its steady decline in popularity. The destruction of Mauser’s factory during WW2 was the final nail in the coffin for the famous pistol.

The old and the new. During WW2, Mauser became one of three manufacturers to produce the P.38 pistol.

Nearly 130 years later, the Mauser C96 pistol is still one of the most sought-after collector guns around. Carried by Winston Churchill during the Boer Wars and T.E. Lawrence during the Arab Revolt, The Mauser C96 is a gun as legendary as it is unique.

The unconventional Mauser C96 was truly ahead of its time. With its high magazine capacity, comparative ease of use, and a holster stock that could allow the pistol to be fired from the shoulder with relative accuracy, the Mauser C96 could do it all, and today it can be found in a variety of attainable price points at Rock Island Auction Company.