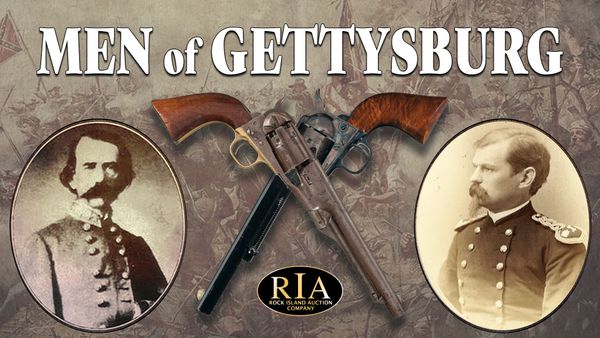 Two men fighting on opposing sides  ̶  one a plantation owner from Mississippi and the other an abolitionist West Point graduate  ̶̶  found their way to Gettysburg, Pa., in July, 1863.

One met his end during this decisive battle of the Civil War, while the other was beginning to build his reputation as a brilliant tactician and later, through his writings, the father of the modern American army.

The three-day battle outside the Pennsylvania town on July 1-3, 1863, is considered the “high-water mark of the Confederacy.” It started with Gen. Robert E. Lee’s Army of Northern Virginia getting the upper hand but ended with the Union troops turning back a final rebel assault that would soon push the Confederate army back to Virginia.

On that third and decisive day, Major William Gustine Conner, of the Jefferson Davis Cavalry Legion, fought in a fierce cavalry assault as Gen. J.E.B. Stuart’s cavalry tried to draw Union forces away from Pickett’s Charge. Conner was a wealthy cotton grower who had served the Confederacy since the start of the war.

To the west, Col. Emory Upton and his 121st New York Regiment arrived the previous day following a 16-hour, 32-mile march. His unit was ordered to reinforce the Union’s left flank at Little Round Top.

In a letter to his sister, dated the following day, Upton wrote: “Lee’s attack yesterday was imposing and sublime. For about ten minutes I watched the contest, when it seemed that the weight of a hair would have turned the scales. Our men fought most gallantly. The rebels began to give way, and soon retreated in utter confusion.”

Conner had previously been captured and returned to his unit following a prisoner swap in 1862. Under an agreement with a commanding officer, he was allowed to lead any charge once in enemy territory due to his disgust over his treatment while in Union captivity.

He charged fearlessly into battle and soon found himself in the midst of the enemy and injured. Surrounded and attempting to escape, Conner’s plight is said to have attracted the attention of General Wade Hampton. The men had ridden side-by-side earlier in the fight. Hampton spotted the surrounded trooper and rushed to his aid. He was slashed twice by sabers and took shrapnel to the hip before escaping without his comrade. Conner was not as fortunate.

The Mississippi Historical Society has documented testimony that Conner rode into the fray “amid the rattle of pistols and clashes of sabers, he seized a guidon (a cavalry standard or flag) of the enemy, and when ordered to surrender drew his pistol and killed two of his assailants before being killed himself.”

In Stuart’s report of the Battle of Gettysburg he writes, “Among the killed was Major Conner, a gallant and efficient officer of the Jeff. Davis Legion.”

Wade Hampton’s cavalry fight at the Battle of Gettysburg from the book ‘Wearing of the Gray; Personal Portraits, Scenes and Adventures of the War’

Conner’s Colt 1860 Army Revolver with fluted cylinder and stock reflects the patina of one used in the Civil War. The back strap has the historical inscription “Capt. W.G. Conner.” It also includes a non-matching shoulder stock that was among 80 sent along with 160 revolvers and 80 flasks. A factory letter lists the shipment to the commander of the Adams Troop of Cavalry, of Natchez, Miss., on Jan. 17, 1861.  Among the documentation is the original document receipt for payment dated Jan. 14, 1861.

A gifted tactician, Upton served in artillery, infantry, and cavalry units during the Civil War. He served in an artillery unit during the First Battle of Bull Run and Battle of Antietam, and was recognized by commanders for his tactics in those battles.

During the 1864 Battle of Spotsylvania Court House, Upton seeing the Confederate battlements, ordered his men forward in columns to overwhelm the enemy rather than in lines stopping to fire. Though his men broke through the line, they were unable to hold it without reinforcements and withdrew. Still, the tactic was used by Gen. Ulysses S. Grant in an assault two days later and was a tactic used decades later in trench warfare during World War I.

From 1870 to 1875, Upton served as Commandant of Cadets at West Point before being ordered abroad to observe armies in Asia and Europe. He long believed in the need for a professional standing army supplemented by reserves and militias, reforms that were introduced in the early 20th century.

Following his time overseas, Upton wrote an unpublished manuscript of recommendations that would become the basis for a modern, professional U.S. Army. Nearing completion of the manuscript, titled “The Military Policy of the United States,” Upton was suffering from severe headaches, erratic behavior and memory problems. In March, 1881 he wrote a brief letter to his sister and a one-line resignation of his commission then fatally shot himself. He was 41.

Following his death, the manuscript was shared among military colleagues before being published more than two decades later, spurring the reforms.

Gen. Upton’s Colt Single Action Army revolver, presented to him during his time as commandant at West Point, was touched very little and appears like “a piece of fine jewelry.” Mechanically excellent, the revolver comes with a storage box with ammunition.

Ominously, the cartridge block in the case holds 50, with just one round missing.

Brevet Major General Emory Upton’s Colt revolver in its presentation case with one cartridge round missing.

History in Your Hands

Conner’s Colt shows the use of war during his time in the Confederate Army until his fall on the battlefield of Gettysburg. Upton’s revolver, though little used, was held by a brilliant Civil War tactician and military mind whose writings changed the U.S. Army. Both men’s Colt revolvers are part of history and are on offer at Rock Island Auction Company’s Premier Firearms Auction, Dec. 3-5.

‘Emory Upton and the Shaping of the U.S. Army,’ by Kevin Baker, historynet.com