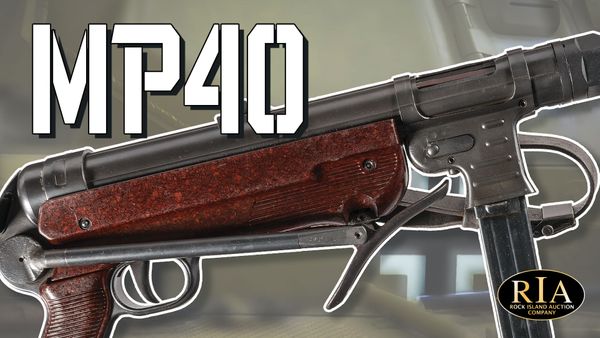 The MP40 submachine gun, or the ‘Maschinenpistole 40‘, was the signature SMG of the German Wehrmacht during WW 2. The groundbreaking weapon was designed for both tactical superiority and ease of mass-production, a manufacturing philosophy other militaries quickly adopted.

One of the most recognizable close combat weapons of the Second World War, the MP40 saw service with all branches of the German military on every battlefront. Many of the prized submachine guns also found their way into the hands of opposition forces such as the French Resistance and Poland’s Home Army. With a reputation for durability, comfort, and relative accuracy, the full-auto MP40 was a versatile weapon in a variety of combat scenarios.

The MP40 was originally issued to German infantry leaders, paratroopers, and armored vehicle crews who would find carrying a full-sized rifle impractical. The iconic firearm often appears in WW 2 images and historic newsreel footage, and its presence is even more widespread in television, movies, and popular video games depicting the Second World War. Though not nearly as common as the K98 rifle, over a million MP40s were produced after its introduction in 1940. The story of the weapon starts years earlier, however.

The MP40 was often dubbed the “Schmeisser” by Allied troops, a reference to the MP18’s designer, Hugo Schmeisser. As the world’s first mass-produced submachine gun, the MP18 made a limited but dramatic impression in the final months of WWI and went on to influence numerous next-generation SMG designs.

Although Hugo Schmeisser did not develop the MP40, he held a patent on the magazine, a double-stack, single-feed design using 9mm Parabellum. The MP40 traces its more direct origins to Heinrich Vollmer’s experimental MP36, and his subsequent MP38 model that was crafted around a machined steel receiver. The weapon was a work of art. Forged and milled, sawed and sanded, the MP38 was like the Rolls-Royce of submachine guns. The demands of the German war machine were insatiable, however, and a different approach was required to deliver a higher production volume.

The subsequent MP40 was highly similar to the MP38, especially in operation, but the Maschinenpistole 40 represented a new paradigm of military weapons that were designed to be produced in large quantities by everyday workers, where individual parts could be subcontracted to a variety of factories as needed. In the age of industrial warfare, cost and output were paramount, and soon tens of thousands of MP40s were rolling off the assembly lines.

A refined and streamlined successor to the MP38, the MP40 made extensive use of metal stampings instead of costly machined parts, as well as synthetic materials to make a weapon robust enough to withstand the rigors of war while being simple enough to manufacture to keep up with the demand.

The Maschinenpistole 40 was produced by three primary factories, Erma-Werkes, Steyr, and C. G. Haenel. In addition to the weapon’s numerous stamped steel components, including the grip frame and trigger housing, the grips and lower receiver cover were fitted with Bakelite, the first synthetic plastic, a versatile material that further lowered the MP40’s production time compared to its predecessor.

Despite the groundbreaking nature of the MP40, the Germans still emphasized quality and designed everything large enough to accept a serial number. Every major component of the MP40 is plastered with proof marks, and the weapon carries a clear aesthetic not found in some of its more bare-bones contemporaries like the British STEN class of submachineguns. So while the MP40’s design minimized machine time and optimized production speed, it was further simplified throughout the war as demand increased and German resources dwindled.

The MP40 is a straight blow-back submachine gun that fires from an open-bolt. Its comparatively simple firing mechanism didn’t include a select-fire feature, making the fully automatic weapon fairly reliable when maintained, though the MP40 was put to the test in the bitterly cold conditions of the Eastern Front.

This example was manufactured by Erma Waffenwerke (ayf), with “WaA254” proofs overall and “ayf43” on the receiver socket.

At nine pounds, the MP40 is a bit heavy compared to the British STEN or American M3, but its under folding steel stock made for a compact package by the standards of the time. By all accounts, the MP40 is an easy gun to aim, and when properly held by the housing beneath the receiver instead of the Hollywood style of gripping the weapon’s 32-round box magazine, the MP40 can be quite accurate for an automatic weapon.

The MP40’s 500 rpm cyclic rate is slower than some of its contemporaries like the Thompson, but the German submachine gun also has less kick and muzzle rise. The hook on the bottom of the MP40’s barrel was designed as a resting bar to latch the gun over the side of a vehicle to further stabilize it when firing, an ideal feature for the armored crewmen and support infantry to whom the gun was widely issued.

At the beginning of the war, the British military had few submachine guns and were soon forced to play catch-up with Germany. Enter the Thompson. As a first-generation SMG, the Thompson submachine gun was a costly weapon to produce and relied on precision machined parts, much like the MP38. And while the Thompson offered select-fire and employed the heavier .45 ACP round compared to the MP40’s 9×19mm Parabellum, the Thompson just couldn’t be produced in the needed quantities.

Developed in 1942, the U.S. M1 Thompson was a streamlined version of the classic Thompson submachine gun, intended to simplify the weapon and speed the manufacturing process.

The British were soon presented with the same problem that had driven the German’s to embrace the MP40’s manufacturing-friendly design in the first place. At first the Lanchester seemed like a possible option, effectively a reverse-engineered version of the German MP28. Though the Lanchester was still far cheaper than the Thompson, it was still too complicated to fully meet British demand, so the STEN was developed as a high-speed, low-cost alternative.

In 1941, the U.S. Army Ordnance Board observed the effectiveness of submachine guns fielded in Western Europe like the MP40 and the evolving British STEN design. In an effort to compliment the expensive and slow-to-produce Thompson, inventor George Hyde developed the M2 Inland/Marlin and the M3 “Grease gun.” The M3 was adopted and first entered combat service in the summer of 1944, and over 600,000 were assembled by the end of World War II, a testament to its ease of manufacturing.

Just as the British and Americans endeavored to produce low-cost submachine guns to compete with the MP40, the Soviets developed a close-quarters weapon of their own. Conceived by Russian arms designer Georgy Shpagin as a cheaper, simplified alternative to the PPD-40, the PPSh-41 was fielded by the Red Army across the Eastern Front.

The PPSh-41 was the go-to infantry submachine gun for the USSR in World War II.

Cosmetically, the PPSh-41 and MP40 bore little in common. The PPSh-41 wasn’t fancy or precision-engineered, but it was rugged, durable, fired the plentiful 7.62×25mm Tokarev round, and it was an easy gun to pick up and use. In short, the PPSh-41 was a deadly weapon that could be quickly produced and issued to millions of Soviet troops in time to make a difference.

Called the “Burp Gun” for its blistering rate of fire, the PPSh-41 faced off against the MP40 during the brutal Battle of Stalingrad. The Germans found themselves increasingly outgunned as more Soviet submachine guns hit the battlefield, and by the end of the war, the PPSh-41 outnumbered the MP40 more than 6 to 1.

As the war turned and the Allies introduced millions of submachine guns onto the battlefield, Germany began searching for a way to regain fire superiority and counter the PPSh-41 on the Eastern front. Hugo Schmeisser designed such a weapon, the Mkb.42 prototype, a kind of fusion between the battle rifle and the MP series of submachine guns that used Germany’s new intermediate-range 7.92mm cartridge. Streamlined into the MP44, and later renamed the StG44, the world’s first assault rifle was an impressive firearm, but ultimately appeared too late to save a doomed Germany.

An MP44 assault rifle from the Allan Cors collection, an important milestone in military weaponry.

The MP40 continued to roll off the assembly lines, but the gun’s design was increasingly simplified in response to fewer factories and resources as the Allies pressed their attack. Ultimately, the MP40 could only be streamlined so much, and in the final months of the war Germany searched elsewhere for a cheap and expedient alternative.

The MP3008, the final regression of the MP series, and a true last-ditch weapon.

The Germans found their answer by copying the British STEN MkII and designing a submachine gun that could be produced with the remaining wartime manufacturing resources available. Using a simple stamped and welded tube receiver and a vertical magazine well to accommodate the MP40 magazines, the MP3008 submachine gun was born. A crude but functional weapon, the MP3008 followed the same basic methodology as the German VK98 rifles, the ‘People’s Weapons’ that would represent Germany’s final, desperate defense in 1945.

The Germans produced some of the finest small arms of the Second World War, and many of those designs set the stage for the next generation of weaponry. The MP40 was no exception here. The German submachine gun’s performance made it a favorite with resistance fighters and Allied troops, and the manufacturing techniques pioneered in the MP40’s design went on to inspire generations of post-war weapons like the HK MP5, the Walther MPL, the Uzi, and many more.

The MP40s simple underfolding stock went on to inspire numerous gun designers, including Mikhail Kalashnikov. Captured MP40s were fielded by various militaries throughout the Cold War, and some were even used by the Norwegian military into the 1980s. Notably, the Norwegian Home Guard didn’t officially retire the MP40 until 1990, replacing it with one of its many spiritual successors, the Heckler & Koch MP5.

The H&K MP5 is produced with manufacturing techniques pioneered by the MP40.

Throughout and after the war, hundreds of thousands of MP40s were captured by the Allies. Some were fielded, while others were brought home as war trophies, prized nearly as much as the famous German Luger. Today, MP40s are viewed as a centerpiece item in any WW 2 or military arms collection.

The skyrocketing popularity of military arms collecting has seen a heightened interest in the MP40. The famous weapon has become a popular fixture in numerous WW 2 games, introducing a whole new generation to the capable German submachine gun. With the holiday season just around the corner, there’s no better time to treat yourself to an iconic piece of WW 2 history.

Group Industries/IMI UZI submachine gun, the perfect present for that special someone?

Rock Island Auction Company’s December Premier Firearms Auction features an arsenal of heavy firepower. Whether you’re shopping for military arms from WWI, WW 2, or more modern classics like the M16 rifle, December’s auction is overflowing with guns for every collecting aspiration. And with over 70 machine guns up for bid, Christmas is coming early for some of our lucky firearms friends.

With the finest offerings from legendary collections such as Allan Cors, Dr. Robert Azar, and the third chapter in the illustrations George Moller collection, December’s auction promises to be a can’t miss holiday event for historic military arms. We’ve saved the best for last, so check out the online mailer and keep an eye out for the online catalog in the days ahead. We can’t wait to see you here!

As always, if there are any questions regarding consignment, registration, or future auctions, please contact Rock Island Auction Company today. Our auction schedule is updated frequently on our website, so be sure to go through the listing and start making your plans to visit. All our events adhere to the latest COVID-19 guidelines and restrictions.