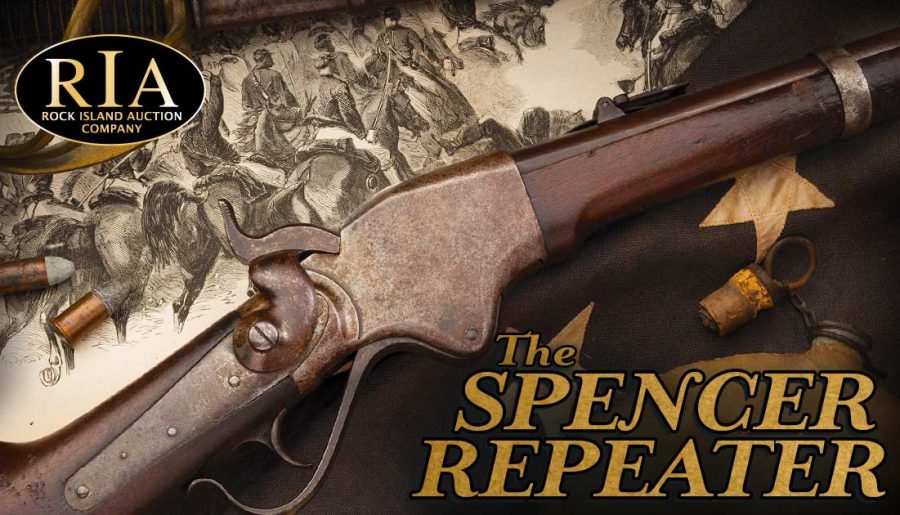 The Civil War era saw a renaissance in rifle innovation and new ammunition systems, and the Spencer repeater represented one of the most successful experiments on both fronts. While repeating muzzleloaders had existed as novelties since the 16th century, the industrialization of the mid-1800s finally allowed the concept of a rapid-fire longarm to be produced en mass. 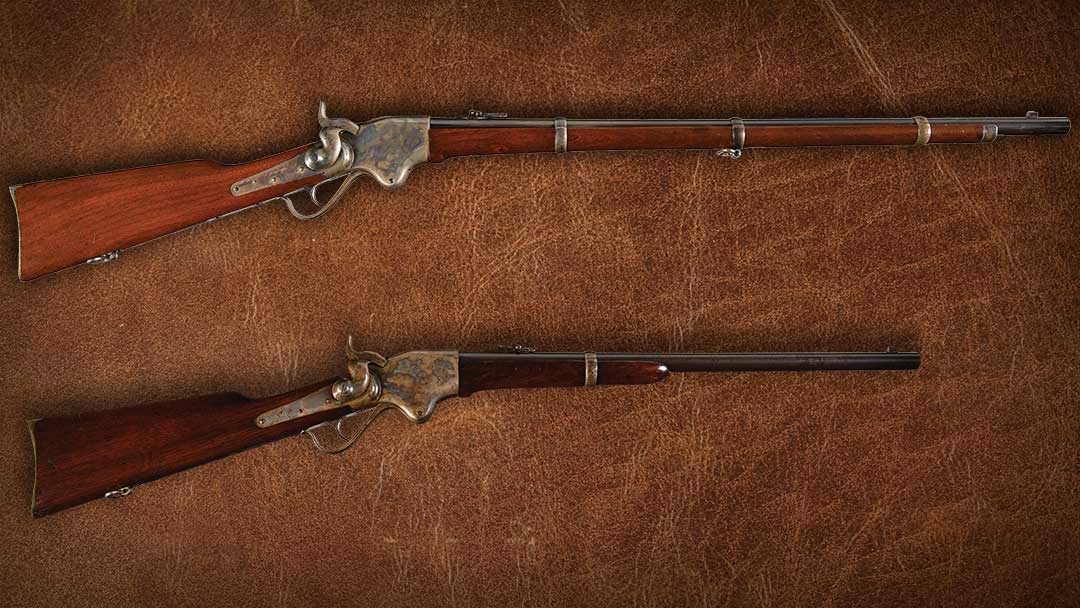 The Spencer rifle (top) and the Spencer carbine (bottom.)

The Spencer rifle combined a rolling breechblock with a seven-shot tubular magazine in the buttstock that was cycled with a lever action, a truly advanced design in an era where two to three shots per minute was the norm for a typical infantry muzzleloader. Though some Union officials noticed the advantages of the Spencer rifle, the gun’s road to mass production was obstructed by skeptics in the War Department.

Road to the Spencer Rifle 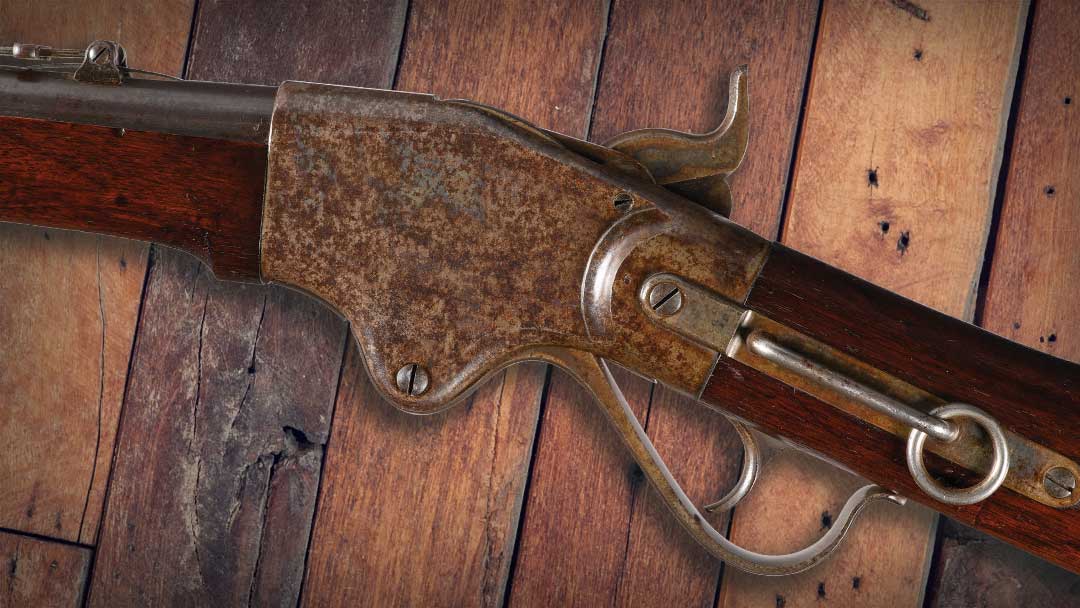 With financial backing from his father, Christopher Spencer patented the design in 1860 and commissioned prototypes of his rifle, with Connecticut ammunition makers Crittenden & Tibbals hired to produce the Spencer rifle’s .56 caliber rounds. An early military test led to Lincoln’s Secretary of the Navy, Gideon Welles, purchasing 1,000 rifles, and an Army contract for 10,000 more soon followed. By 1862, Spencer established the Spencer Repeating Rifle Company in Boston to fulfill what he hoped would be the first of many orders. 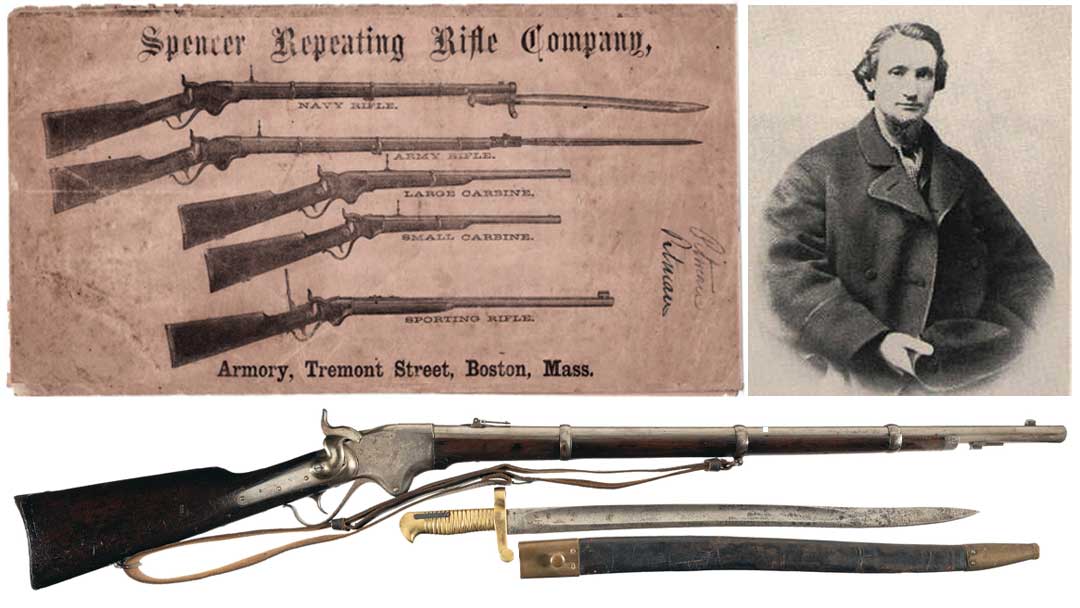 The Navy Spencer rifles were the first Spencer repeaters purchased by the government during the Civil War, and they fall within the 1-750 serial number range. The Navy contact rifles were issued with a sword bayonet with a brass hilt and have a distinctive ribbed bayonet lug on the underside of the barrel.

Skeptics of the Spencer Rifle

The Civil War provided enormous opportunities for gunmakers, but the Army’s Ordnance Department was slow to embrace new technology. In a December 9, 1861 letter from Union Brigadier-General James Ripley, Chief of Ordnance, to Secretary of War Simon Cameron, Ripley opposed the adoption of the Spencer rifle for numerous reasons, including the ammunition. “I regard the weight of the arms with the loaded magazine as objectionable, and also the requirement of a special ammunition, rendering it impossible to use the arms with ordinary cartridges or with powder and ball.” 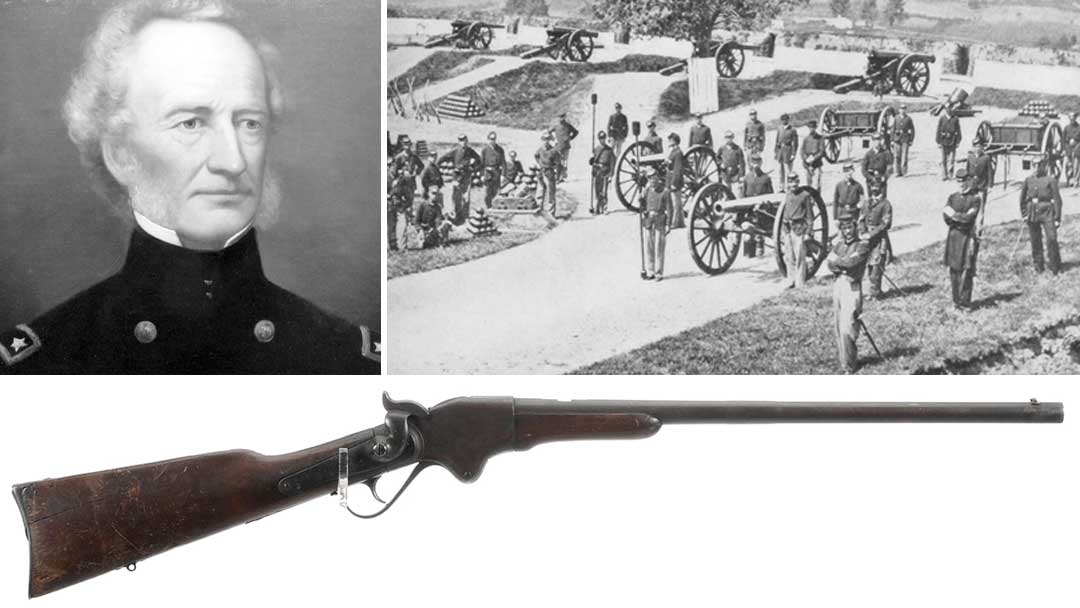 A Civil War-era Spencer carbine. A conservative War Department rooted in tradition stood as a major roadblock to the rifle’s wide-scale adoption. Available this February

As a veteran of the War of 1812 and the Mexican-American War, General Ripley was experienced with tried-and-true muzzleloaders like the Springfield rifle. His skepticism also applied to single-shot breechloaders like the Sharps. In a letter to President Lincoln, James Ripley remarked, “men enough can be killed with the old smooth-bore and the old cartridges, a ball and three buckshot.” 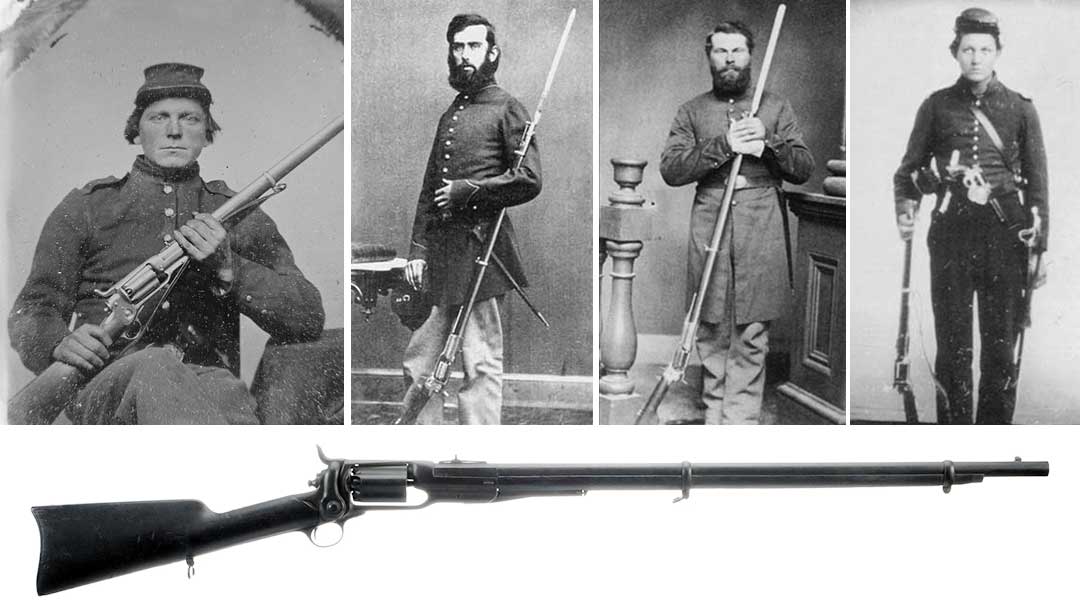 The Colt revolving rifle faced the same skeptics in the War Department. Available this February

The comparatively high price of both the Spencer rifle and its new metallic cartridges was another factor General Ripley cited against the gun. Ultimately, the Ordnance Department would only grant the Spencer rifle to a single brigade, Colonel Berdan’s 1st U.S. Sharpshooters, but the repeating rifle’s first true test in the field came from a privately armed unit that would become known as the “Lightning Brigade.” 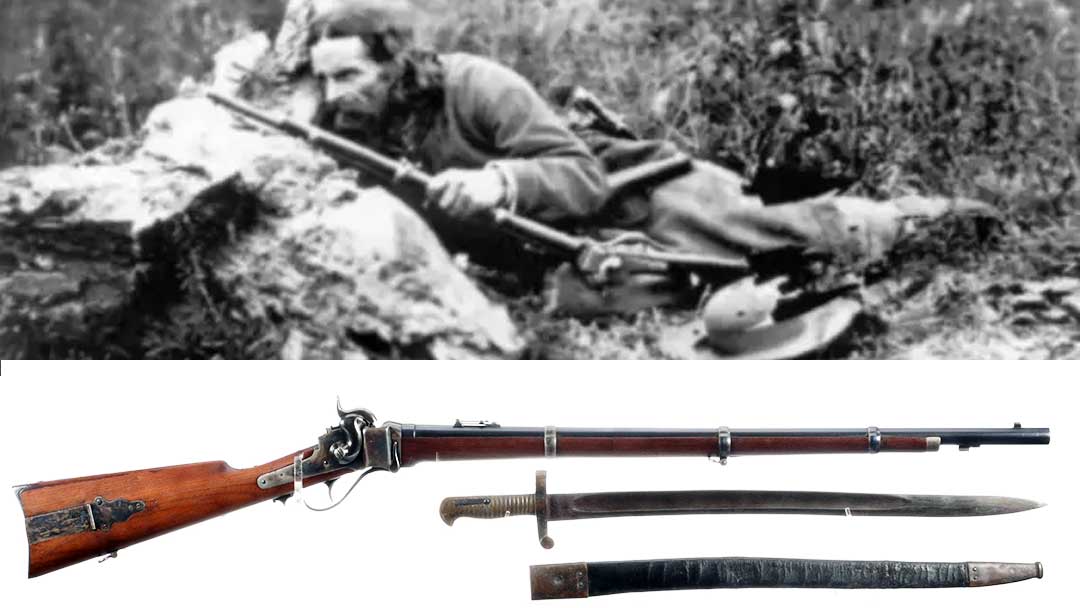 General Ripley was also critical of new breechloaders like the Sharps rifle. Available this February

The Spencer Rifle in the Field

In February 1863, Major General William S. Rosecrans established a cavalry brigade under the command of Colonel John T. Wilder, a forward-thinking officer who understood the advantages of speed and superior firepower. Wilder originally commissioned 900 Henry rifles from Spencer’s competitor, the New Haven Arms Company. New Haven Arms was unable to fulfill the order at the cost Wilder requested, so he struck up a deal with Christopher Spencer instead. 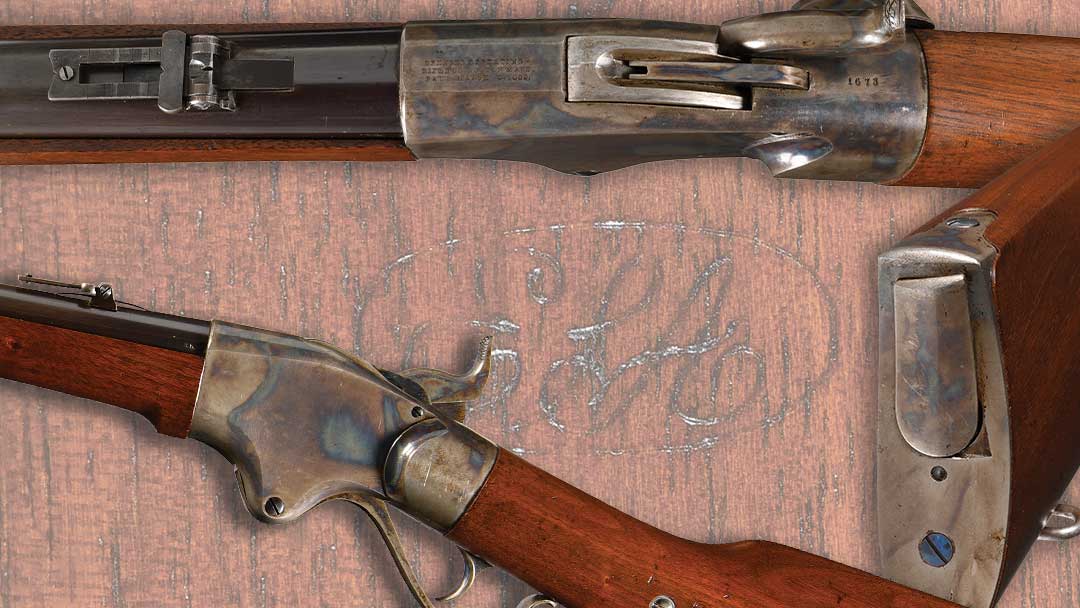 Bypassing the stubborn War Department, Colonel Wilder and his men personally purchased the Spencer rifles through a series of loans. These “Spencer seven shooters” were put to the test in June of 1863 during the Battle of Hoover’s Gap, where Wilder’s men defeated a numerically superior force of Confederates and earned the name “Lightning Brigade.”

One week after the Battle of Hoover’s Gap, the Spencer rifle saw action during the Gettysburg Campaign, fielded by some of George Armstrong Custer’s 5th Cavalry Regiment of Michigan “Wolverines.” 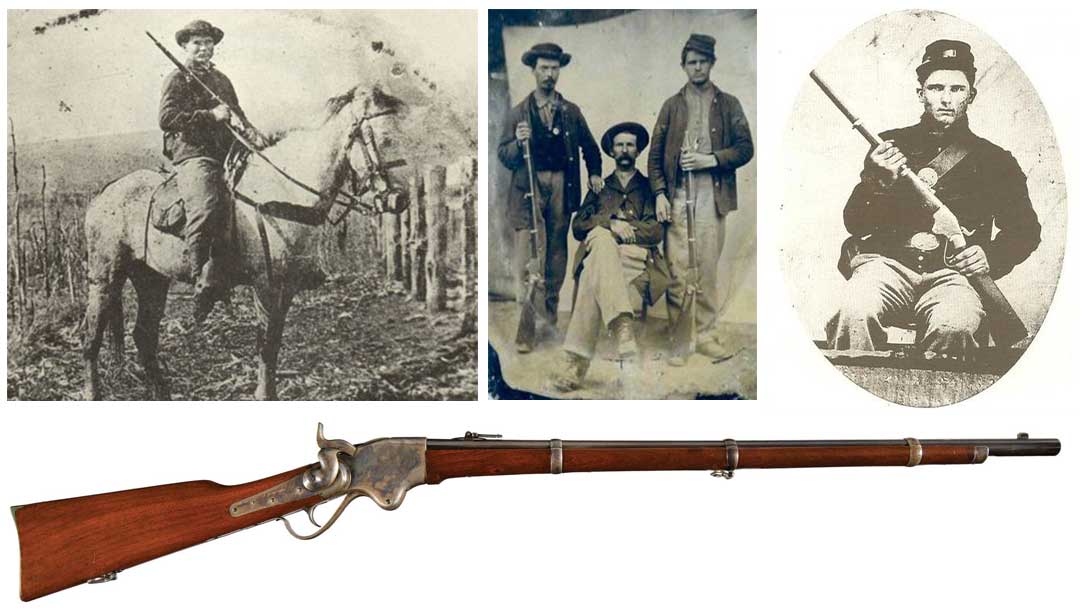 The Lightning Brigade poses with their Spencer rifles.

On the Spencer rifle, Colonel John T. Wilder stated, “My men feel as if it is impossible to be whipped, and the confidence inspired by these arms added to their terribly destructive capacity, fully quadruples the effectiveness of my command.”

The Spencer Rifle and President Lincoln

Frustrated with the Ordnance Department, Christopher Spencer took matters into his own hands and marched into the White House in August of 1863 carrying one of his rifles.

In the December 1921 issue of ‘Scientific American’, Spencer recalls, “On my arrival at the White House, I was ushered immediately into the reception room, with my repeating rifle in my hand, and there I found the President alone. I took the rifle from its cloth case and I handed it to him. He examined it carefully and handled it like one familiar with firearms. He requested me to take it apart and show the ‘inwardness of the thing.’ Approving the gun, he asked me if I had any engagement for the following day, and requested me to come over about 2 o’clock, when, he said, ‘We will go out and see the thing shoot.’” 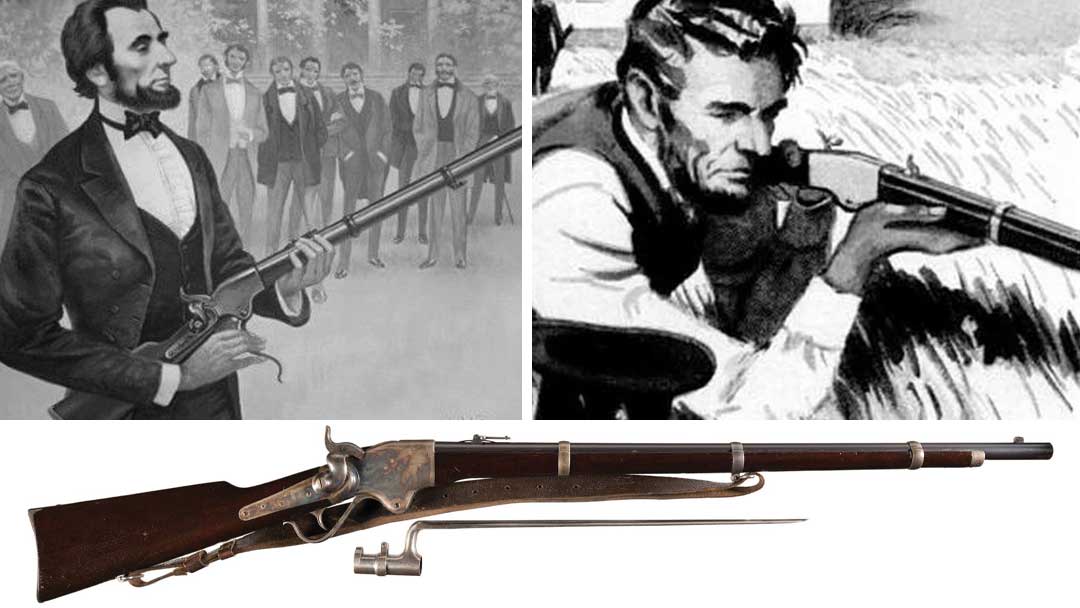 President Lincoln took an interest in new firearms technology like the Spencer and Henry rifle.

The next day, on the National Mall, President Lincoln sank seven shots into a 3 x 6-inch target board from a distance of 40 yards, including a bull’s eye. Impressed with the design, Lincoln pressured the Ordnance Department over the next few months to adopt the new rifle. Upon meeting further resistance, the President finally removed and replaced the stubborn General Ripley. 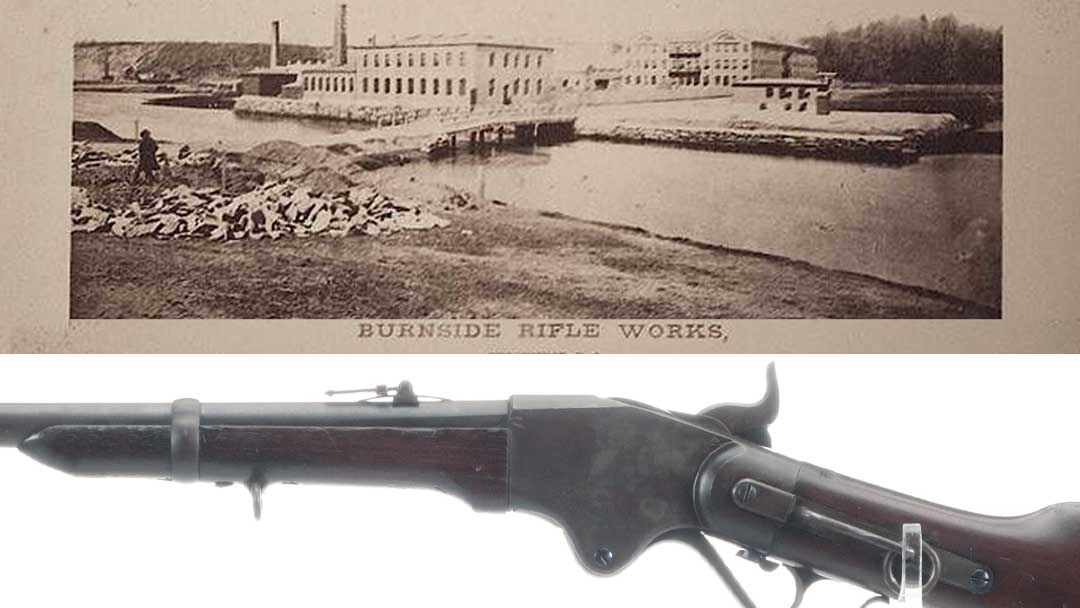 To keep up with demand, Spencer subcontracted some production to the Burnside Rifle Co. of Providence, Rhode Island. Available this February

Production ramped up, and Spencer offered to make a shorter-barreled carbine version of his rifle at a reduced cost to the Army. The first Model 1860 carbines were accepted by the Union in the fall of 1863, starting at about serial number 11,000.

The Spencer Carbine: Cost and Evolution

In 1863, the popular Springfield Model 1861 muzzleloading rifle cost less than $15.00, whereas the Spencer rifle cost up to $40.00, and the Henry repeating rifle retailed for $44.00. For reference, the average soldier’s pay at the time was less than $14.00 per month. Though bulk contracts could slightly reduce the price of Spencer rifles, the $25.00 price tag offered to the Ordnance Department for the first 7,500 Spencer carbines in late 1863 demonstrated why this model quickly became the standard and outsold the Spencer rifle 8 to 1 by the war’s end. 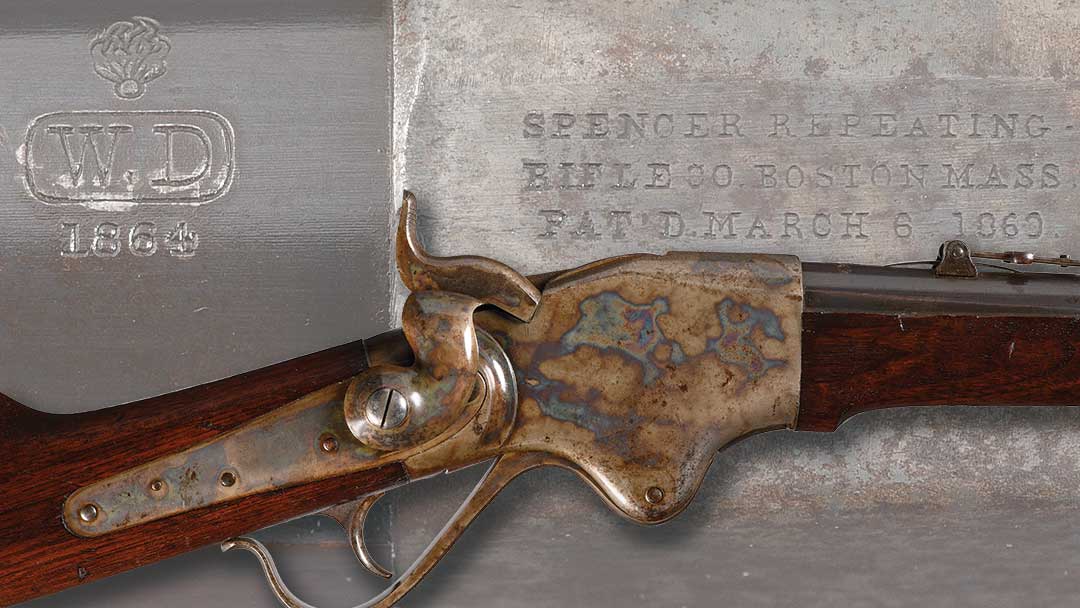 This rare Spencer Model 1860 carbine is identified as a War Department pattern gun and the top of the breech end of the barrel is bearing a flaming bomb stamp above “W.D” (War Department) surrounded by an oval and “1864” in three lines. Available this May.

The Spencer carbine pictured above, a rare example that’s offered in RIAC’s May 2023 Premier Auction, is accompanied by a copy of an official government letter by noted inspector William A. Thornton, dated June 9th, 1864. Thornton’s letter identifies this exact carbine by serial number and proceeds to offer a thorough report on this exact gun and another sample carbine from Spencer Repeating Rifle Company.

In a thorough report, Thornton observes some minor issues with the stock, but goes on to conclude that, “the worksmanship and finish of the samples is the best that has come under my inspection in the examination of samples. I recommend the acceptance of the models as guides for future work, with the understanding that the defects herein specified shall not be allowed to enter into the future manufacture of Spencer carbines.”

The Henry vs the Spencer Rifle

The Henry and Spencer rifles were the Civil War’s two most prolific repeating longarms. Though both firearms used a lever action cycling design with tube magazines that chambered metallic rimfire cartridges, the two guns had a myriad of differences. 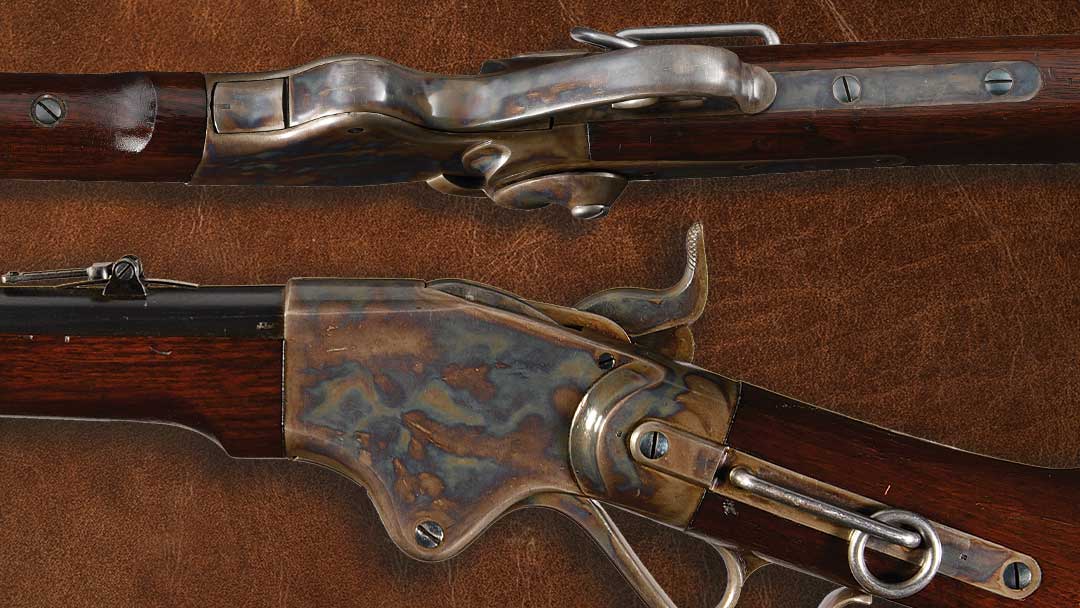 The Spencer carbine was widely praised by troops for its robustness and reliability to stand up to repeated firing and fouling. Available this May.

The Henry’s capacity more than doubled the Spencer rifle’s seven-shot magazine. The Henry also had a higher rate of fire, since the Spencer rifle’s lever did not cock the weapon’s hammer manually. Reloading was also a faster process with the Henry rifle and its more accessible magazine, though reloading the Spencer rifle could be hastened with the Blakeslee cartridge box, a late war invention by Union cavalryman Erastus Blakeslee, where preloaded tubes could assist a user in quickly reloading the gun. 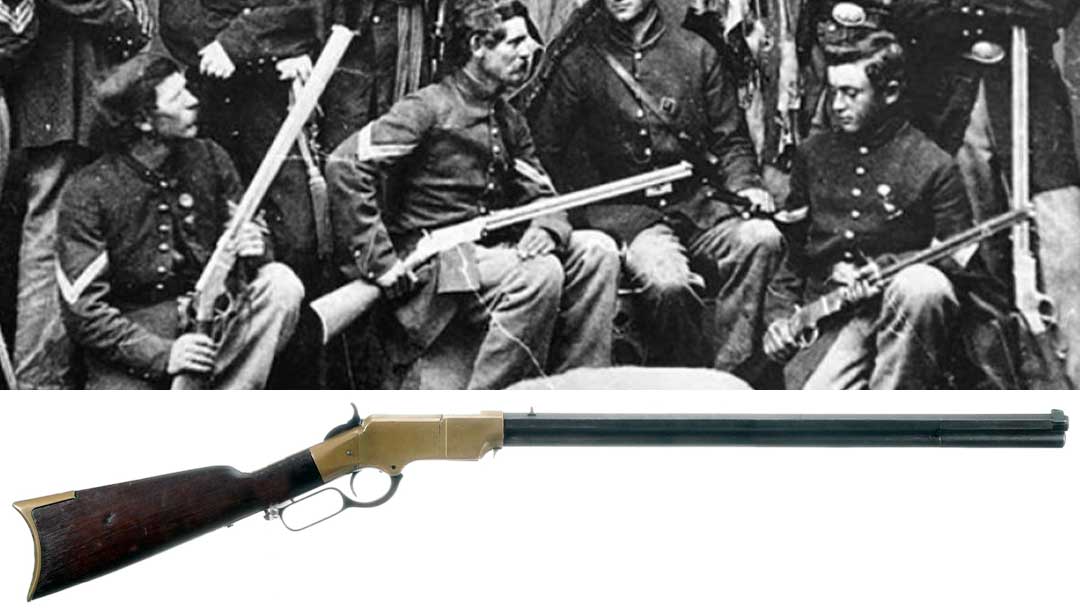 Manufactured in 1864. Only around 14,000 Henrys were manufactured in 1860-1866, and around half of them are believed to have been used by Union soldiers, mostly purchased by the men themselves, some using reenlistment bonuses. Available this February

In the Spencer rifle’s favor, the gun was a more sealed design that made it better suited for the harsh conditions of a Civil War battlefield. The Spencer’s .56 cartridge was also a harder-hitting round than the .44 Henry. Lincoln, a gun buff, was said to prefer the Spencer over the Henry, but the President saw the merits in both designs. In the end, the Spencer carbine variation alone outproduced the Henry rifle more than 10 to 1 during the Civil War. 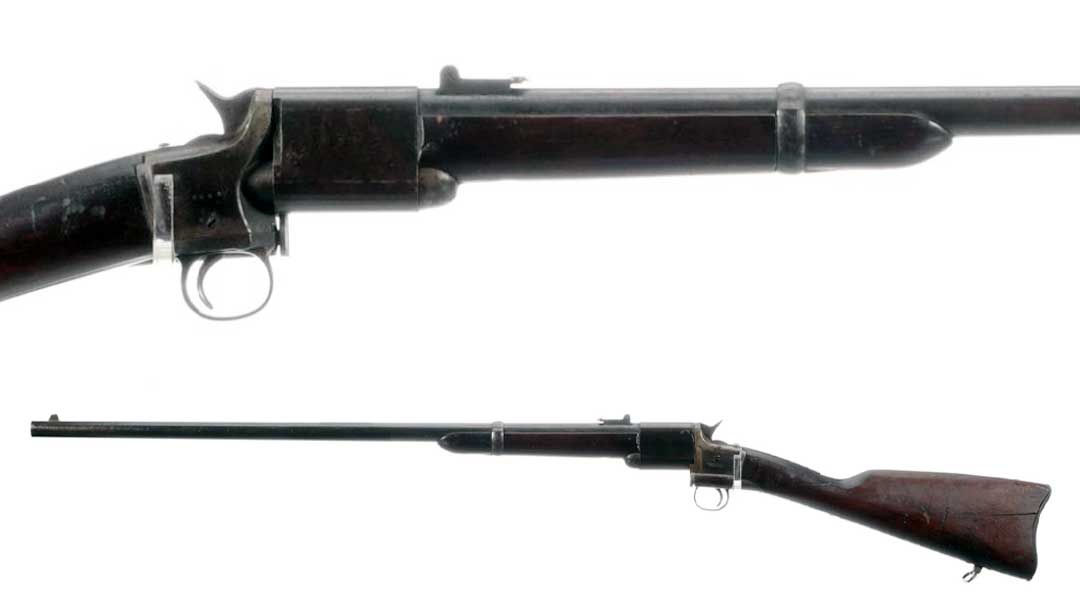 The Spencer Carbine and Spencer Rifle After the War 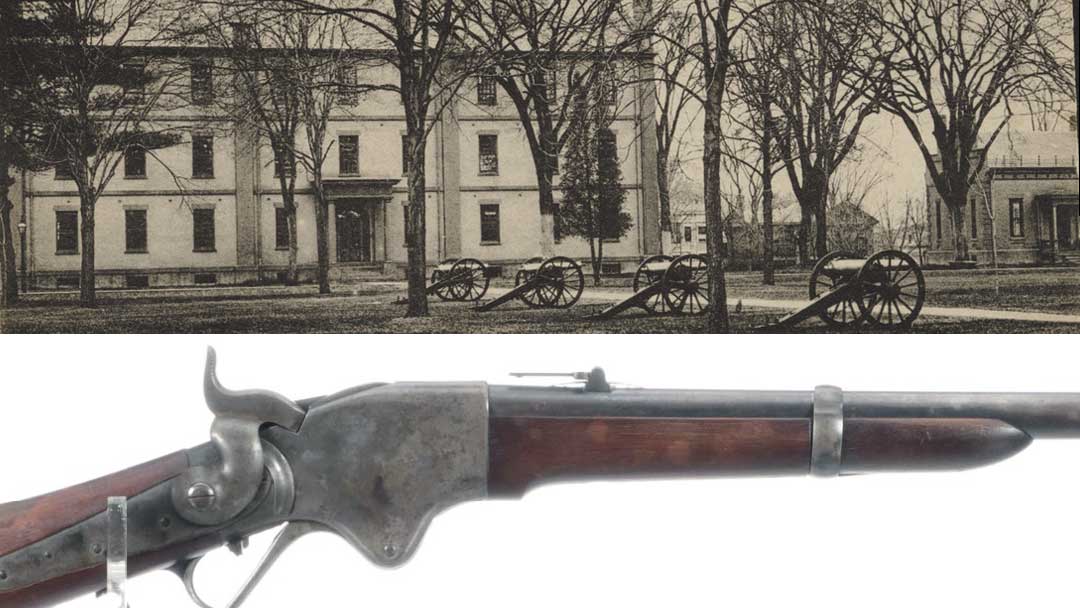 The Spencer carbines with Springfield alterations often include Erskine S. Allen’s “ESA” cartouche on the left side of the stock. Available this February

Relatively few Spencer sporting rifles were produced before the company closed in 1868. With the end of the Civil War, government contracts ground to a halt, the firearms market took a significant hit, and a glut of military surplus hampered commercial sales. Though the demand for new Spencer carbines and rifles cratered, the gun endured for decades as Americans moved west and took their Spencers with them. 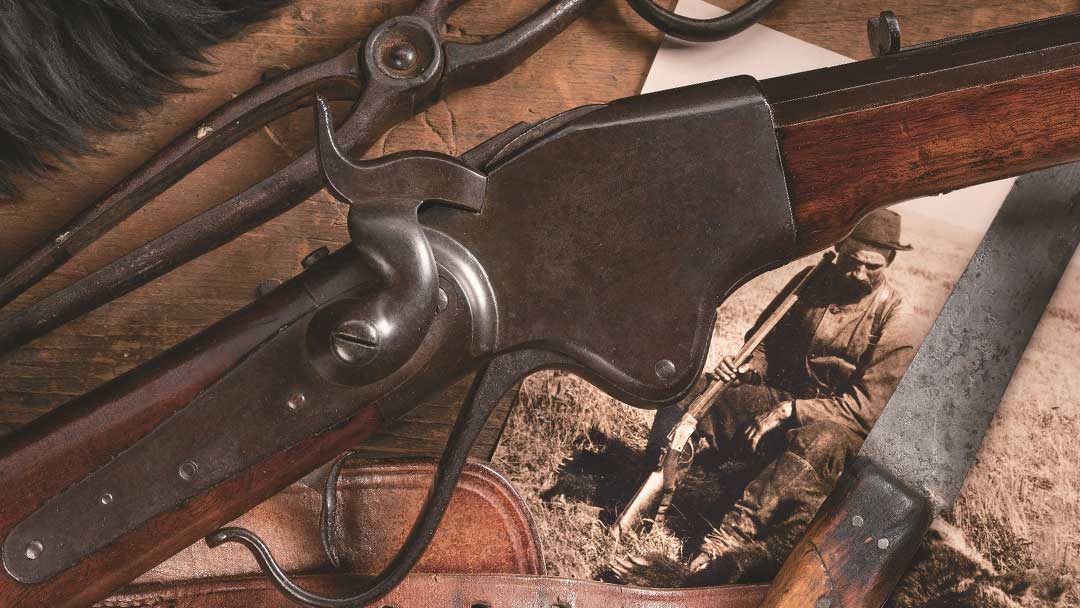 The Spencer carbine in particular became one of the favored longarms of frontier scouts, Indian fighters, and some of the Native American warriors they faced. Notorious outlaw Tiburcio Vásquez was said to always sleep with a Spencer rifle by his side and was captured with two Spencers among his stash of shotguns, rifles, and sixshooters. 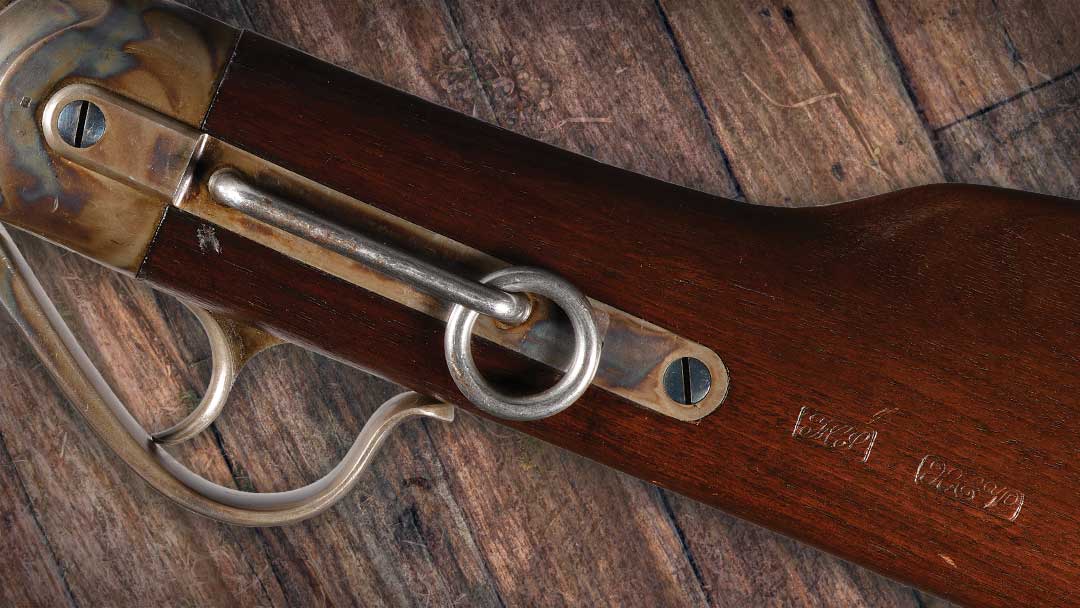 Spencer Model 1865 carbines were serial numbered in the approximate range 1-23000 and manufactured circa 1865-1866. Many of these late Spencer carbines were used during Reconstruction and in the Indian Wars. Available this May.

The Legacy of the Spencer Carbine and Spencer Rifle 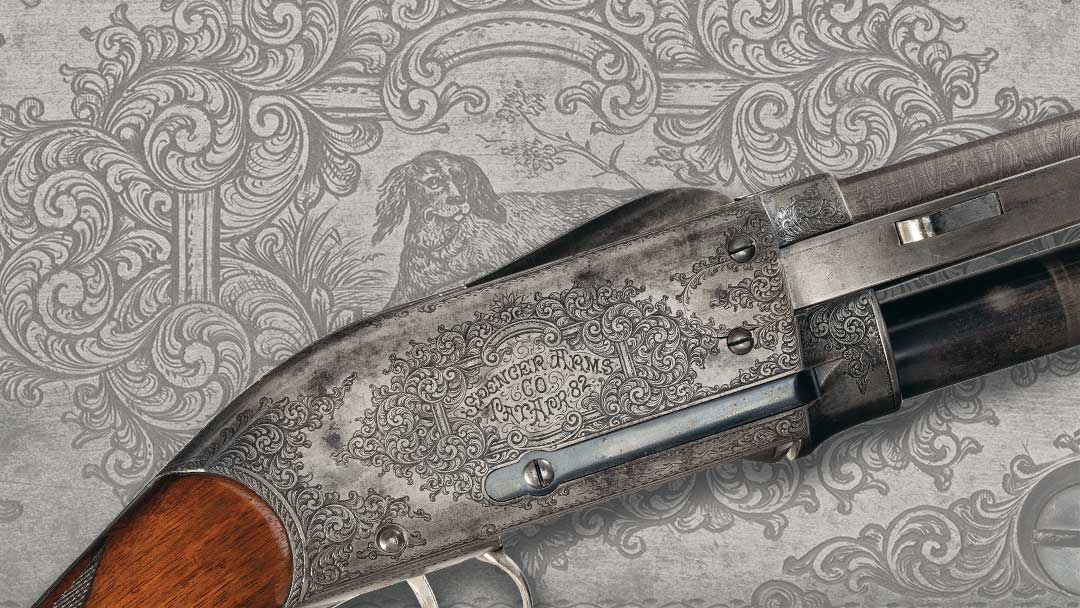 Spencer continued his work as an inventor and engineer until his death in 1922. Though his accomplishments are numerous, including developing one of the first steam-powered cars, the Spencer rifle and carbine were unquestionably his most successful design. As the American military’s first widely adopted repeating rifle, the Spencer has earned a well-deserved place in firearms history and is a gun-collecting must-have for 19th-century firearms fans.

Though the Spencer carbine never reached the front lines in the volume President Lincoln hoped for, it had a greater impact on the Civil War than any other repeating longarm. The Spencer’s rich history makes surviving examples of these fantastic weapons all the more desirable today, and Spencer carbines and rifles can be found for sale at Rock Auction Company at every collecting price point. 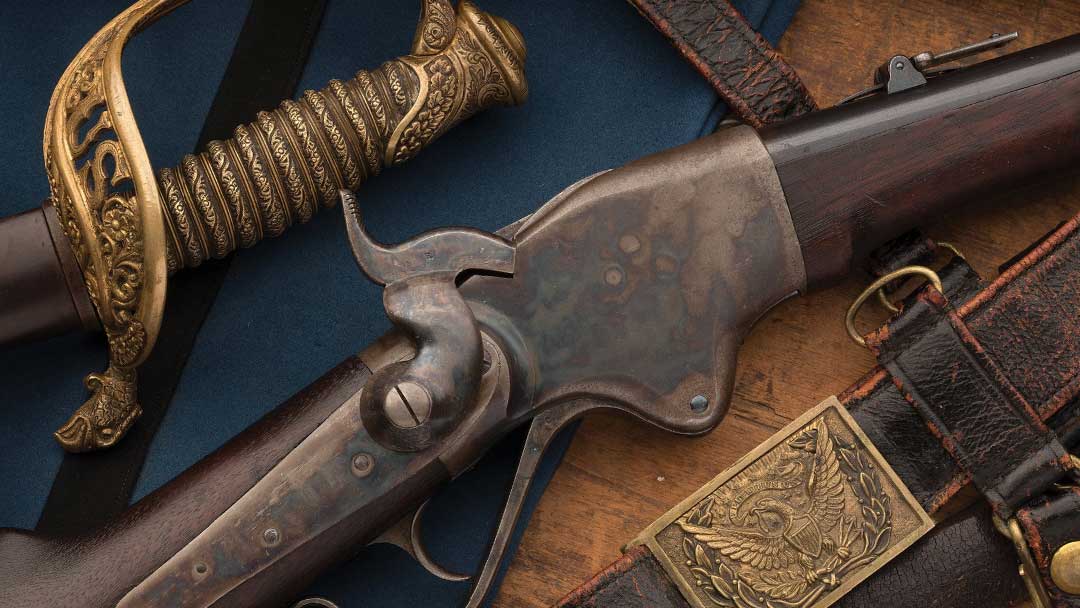 It’s little wonder that gun collectors and history enthusiasts are drawn to relics from the Civil War. Rock Island Auction Company’s upcoming Premier and Sporting & Collector auctions feature a wide selection of firearms and militaria from the conflict, and you can subscribe to the weekly Rock Island Auction newsletter to receive new gun blogs and gun videos that dive deeper into Civil War guns like the Gatling gun, the Starr carbine, and the unique Confederate revolvers produced by the South’s decentralized manufacturing base. 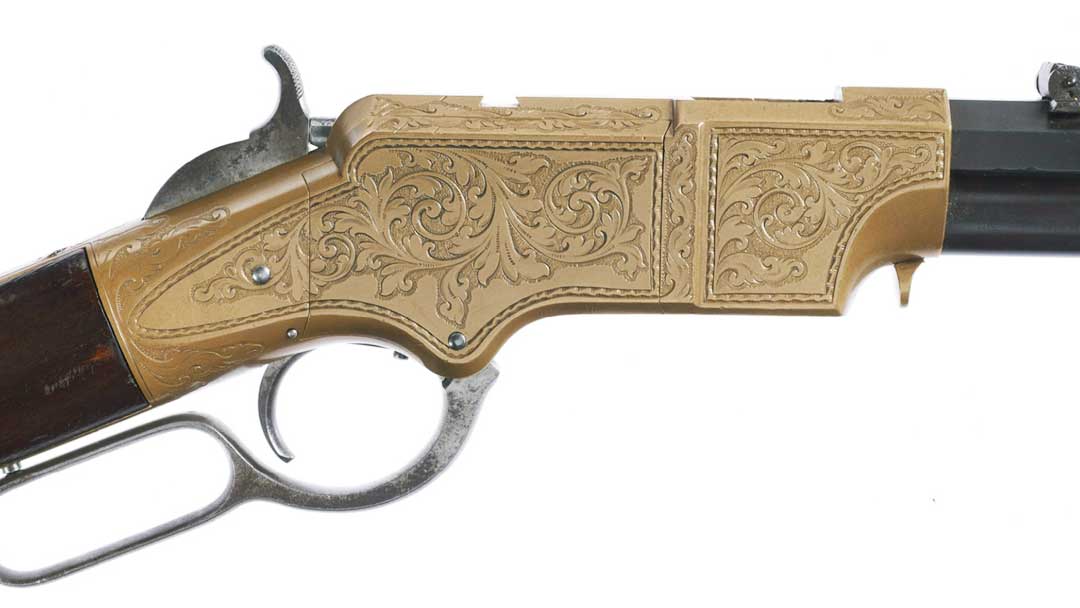 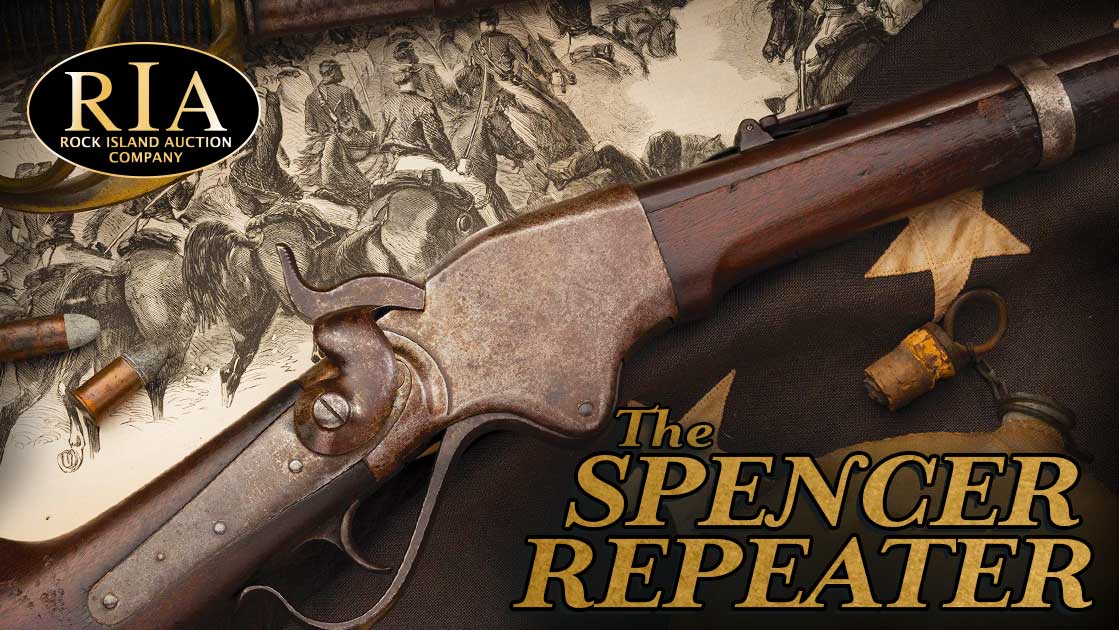