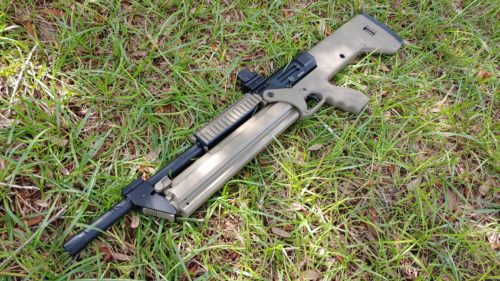 U.S.A -(AmmoLand)- The shotgun market can be awfully stale. We get a new wonder rifle or handgun seemingly weekly, but a new shotgun hardly gets any attention. Most of them come in pump-action or semi-auto. They fire a load of shot. Most have tubes, some have magazines, but the overall design is fairly simple. Well, that’s changed with the SRM 1216. Don’t worry, and it’s a good change. The SRM 1216 could be the future of combative shotguns.

So What I Am Looking At

Well, I call it one of the most innovative and underrated shotguns currently on the market. It’s a 12 gauge, semi-automatic shotgun in a quasi bullpup configuration that utilizes a removable, rotating magazine made up of four tubes. Oh, and it’s a roller delayed system, not inertia or a traditional gas-operated gun.

The magazine sits under the barrel and is essentially four tubes that form one magazine. Each tube holds 16 rounds of 2.75-inch shells. When a tube runs dry, the user rotates the magazine to the left or right and feeds from the next tube. Once every tube is dry, you can replace eject all four tubes as a detachable magazine and load another magazine of 16 rounds.

Pretty dang simple. I say quasi bullpup because the action isn’t behind the trigger/pistol grip but placed directly over it. It’s like an Uzi in a lot of ways. The end result is a 33-inch shotgun that’s a fair bit shorter than your standard shotgun with an 18.5-inch barrel. For reference, a Mossberg 590 short-barreled shotgun with a 14-inch barrel that holds five rounds is 33.75 inches.

As a bullpup, it could be challenging to lefties, but you can actually swap the ejection to the opposite side. It’s not easy, but it can be done at home. The same goes for swapping the bolt release and charging handle. Or even better, just order it from SRM Arms in the configuration you desire.

Ergonomically the gun is set up perfect for me. The gun ejects out of the right, but the charging handle is on the left. The bolt release is on the right and takes nothing more than a press of my trigger finger to close. The safety is ambidextrous AR-like in many ways. The magazine release and unlock devices are also ambidextrous.

To rotate to the next tube, you need to flick one of two tabs to unlock the magazine for rotation. This does require a rather long reach but is quickly accomplishable. The magazine release is the same way. Overall, magazine swaps won’t be AR 15 fast and will best be done while chicken-winging the gun. However, after 16 rounds of 12 gauge, I’m not sure how much reloading you’ll need to do.

You cannot top off the magazine on the fly like a normal shotgun. It’s all or nothing. Loading the magazine takes two hands, but once it’s loaded, it can remain loaded. Traditional box magazines cannot be left loaded, or the shells deform. That’s not an issue here.

The 13.25-inch length of pull is quite nice. It’s not superbly long and uncomfortable. Too many shotgun companies use 14 to 14.5-inch length of pulls that are downright sickening for tactical shooting. Here we get a controllable length that makes using the gun with modern gear possible.

At the range, the SRM 1216 handles quite well. The semi-auto action is quick and cycles rapidly. With a red dot on the gun, I can get on target and start dispatching buckshot with little effort. Recoil is a stiff push, but the semi-auto takes some sting out of the gun. The SRM 1216 has very little muzzle rise, and with a good recoil mitigation technique, you’ll be putting buckshot right where you want it.

Swinging between targets and engaging rapidly feels natural with the short length of the gun. I can swing between several targets and rip them to shreds with controllable double-taps. Swapping from tube to tube can be done quite quickly. When shooting the gun, I practiced loading one round in each tube practiced running the tubes.

When a fresh tube comes into place, the bolt automatically closes and loads the fresh round. As soon as you rotate the tube, the gun is ready to shoot. I got it down to the point where I could do all four rounds from four tubes in less than four seconds.

The gun weighs a little more than seven pounds, so it’s not beefy, and most of the weight is to the rear, so it balances well. When loaded, the front doesn’t feel too heavy, even with 16 rounds of buckshot. The gun has a cylinder bore, and that works well since I adore Flitecontrol. There is nothing special about its ability to pattern with standard buckshot. It’s quite typical in that regard.

Yep, even with crappy, lightweight birdshot, it goes bang every time and cycles the cheapest of ammo. In fact, the only issue I can manufacture is using purposefully underpowered skeet and trap loads. Anything about 1,000 FPS runs fine. And no, it doesn’t use mini-shells. The SRM 126 is one helluva shotgun, and it’s shocking that it’s been around for a decade and has never gotten the attention it truly deserves.

It’s right around 1700 bucks, but that puts it priced much lower than a Benelli M4. Extra mags cost 200 bucks a pop but are seemingly always available. What say you? Is the SRM 1216 for you? If so, let me know below. If not, let me know why.

Travis Pike is a former Marine Machine Gunner, a lifelong firearms enthusiast, and now a regular guy who likes to shoot, write, and find ways to combine the two. He holds an NRA certification as a Basic Pistol Instructor and is the world’s Okayest firearm’s instructor.