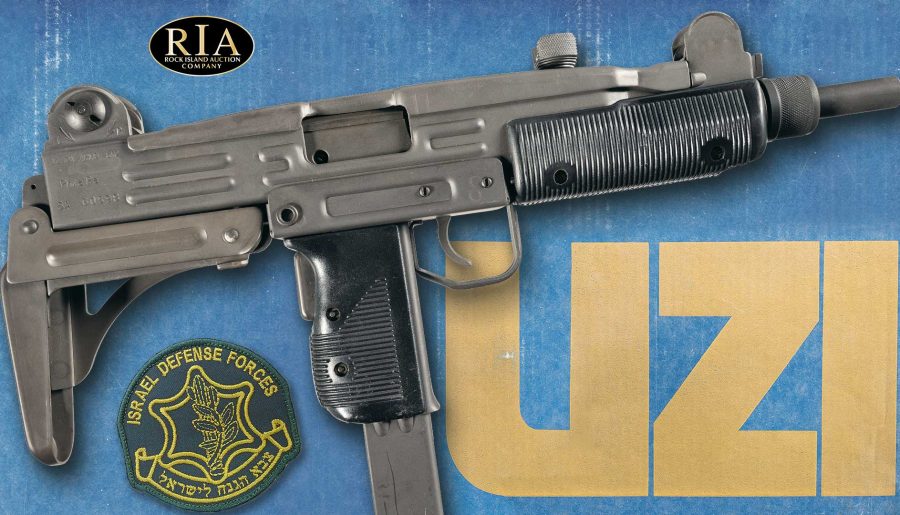 The Uzi is easily one of the most recognizable weapons in existence. It’s wildly popular in the guntuber community, and every one of my friends in rural Pennsylvania toted an airsoft Uzi from Wal-Mart back in the days when kids could run around in the woods shooting each other. Ah to be young again. Those hours spent playing commando along with a strict diet of 80’s action movies instilled a love of firearms that eventually became a career. They also convinced me that the Uzi was the perfect gun for commando-style activities. As it turns out, I was right. 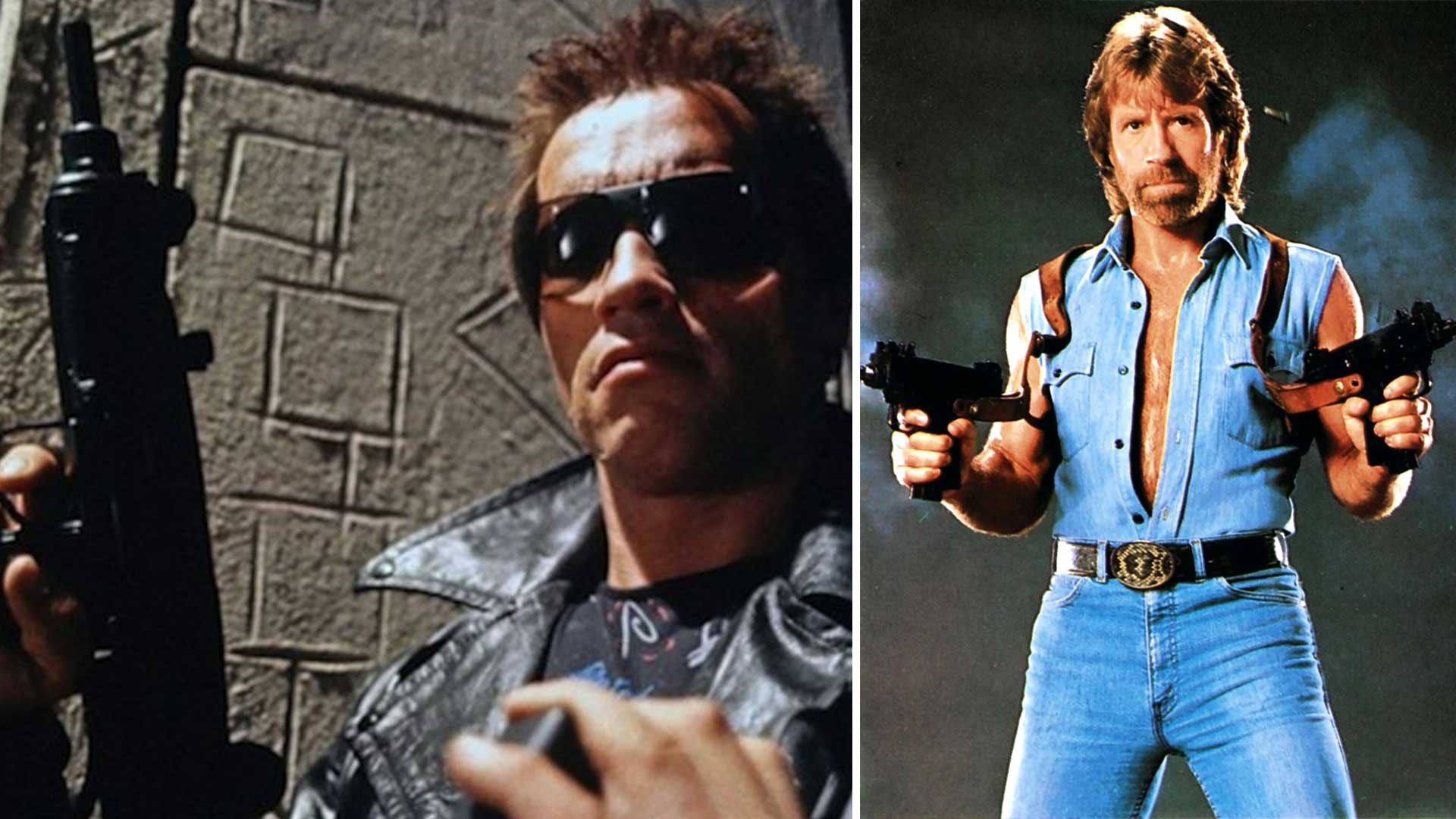 The Uzi submachine gun was a Hollywood favorite throughout the 1980s.

Since working with Rock Island Auction Company, I’ve had the pleasure of handling some of the world’s most coveted firearms, but I still get butterflies when I see an Uzi come in.  Even folks whose lives don’t revolve around firearms recognize the Uzi, its design is iconic and instantly recognizable due in part to its prominent place in popular media. Yet the history of the weapon tends to fly under the radar despite its status, and its story is certainly an interesting one.

Birth of the IDF

On May 14, 1948, the State of Israel became an official entity. To say that its Arab neighbors were unhappy with the presence of this new country would be the understatement of the century, and the fledgling nation would be baptized by war as soon as the flag was raised over Jerusalem. Within days of its founding, Israel was beset on all sides by a coalition of Arab countries and plunged into a brutal war known as the Arab-Israeli war.

Seeing as how Israel had not been a nation for very long, the groundwork for an organized military force had yet to be laid out. Initially, the fighting fell into the hands of the citizenry who fought under the banner of several guerilla forces. Wars are more than just troops though, and organizing several factions under one banner is a fool’s errand. Thus, two weeks after the nation’s founding and the start of their first war, the Israeli Defense Force (the IDF) was born. The task before them was a daunting one, as the young nation had disproportionate numbers of troops and arms. 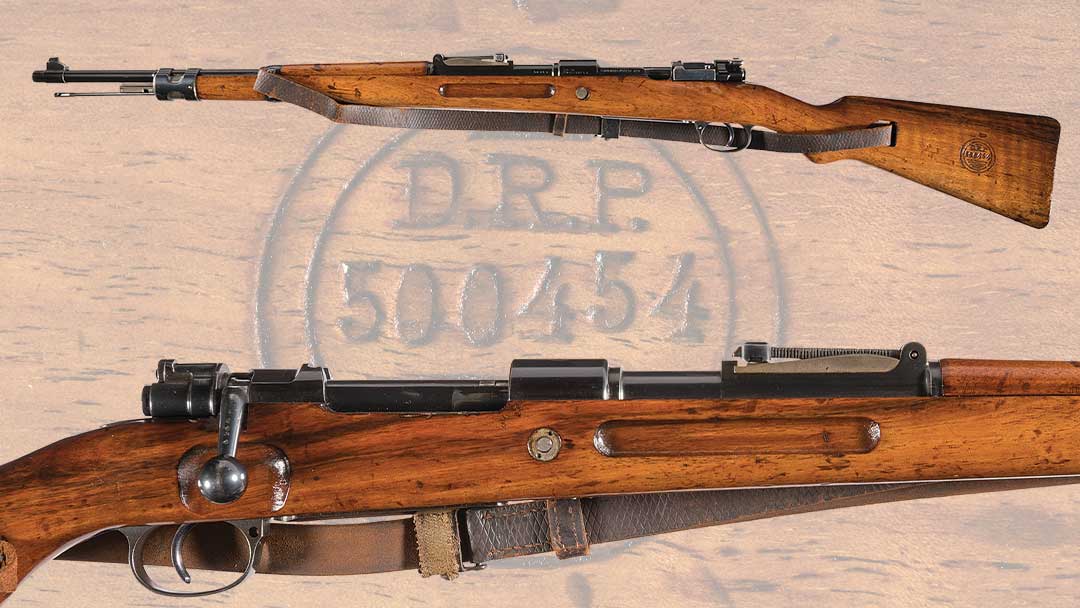 The fledgling state of Israel wasn’t armed by its allies, but rather Soviet-controlled Czechoslovakia. In one of history’s greatest ironies, Israel’s most commonly acquired early rifles were captured German K98s.

The Israelis had yet to develop their own weapons industry and few nations were prepared to provide arms and equipment to them, so most weapons used during the conflict were smuggled in or were owned privately by the citizens. A large portion of the weapons smuggled in were acquired through Operation Balak. The operation was a scheme involving the USSR, Czechoslovakia, and the Israeli government. With the aid of the USSR, Czechoslovakia clandestinely exported thousands of surplus K98’s and MG34’s (with the ammo to feed them) to the fledgling Israeli state.

The Czechs were a good source, considering Germany maintained a weapons production there throughout the war. The tenacious IDF held their aggressors at bay for almost a year until the UN helped broker an armistice between Israel and her Arab neighbors. Surrounded by enemies and birthed in war, Israel would soon begin bolstering its military forces and developing a weapons industry of its own.

Enter a man by the name of Uziel Gal, an IDF Lieutenant who in 1952 patented a design for a simple blowback-operated submachinegun that would end up inheriting his name. Gal was a European who escaped Nazi Germany by moving to England and eventually Palestine. His younger years saw him studying engineering at a technical school, and by 15 he had already designed and built a weapon that could automatically fire arrows. 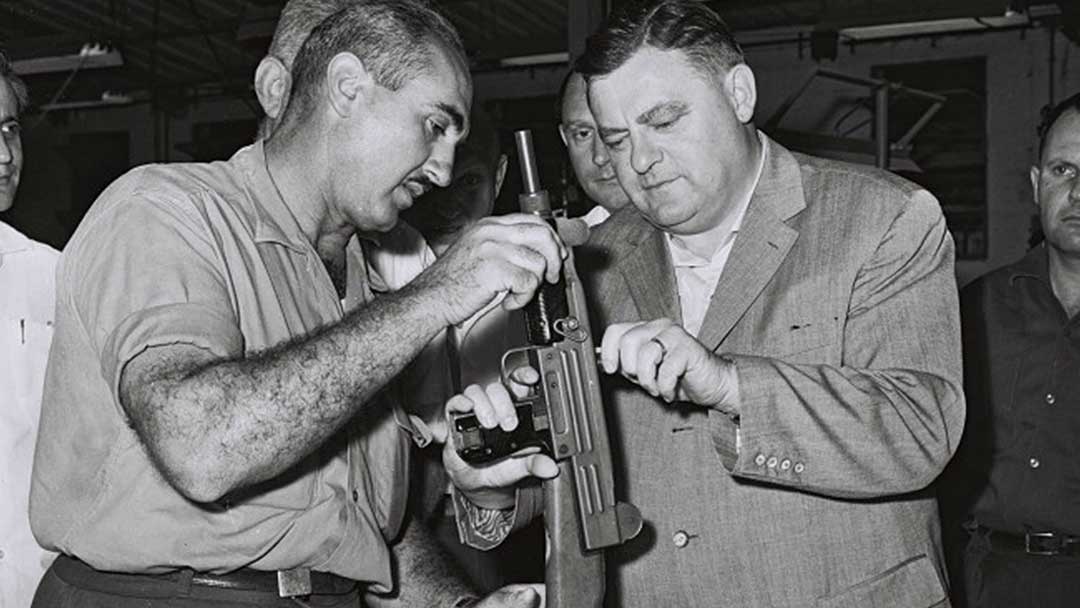 Uzi Gal, the inventor of the Uzi submachine gun. Gal was reluctant to have the gun named after him, but his protests were refused.

Uziel Gal joined a Zionist paramilitary group known as Haganah (one of the previously mentioned guerilla forces) after his school years, and in 1943 was arrested by the British (who controlled the Palestine region per a League of Nations mandate) for owning illegal weapons. While imprisoned he began studying mechanical engineering, preparing him fully for his future engineering endeavors. With the close of the Arab-Israeli war in 1949, Israeli officials began preparing their arms industry by taking entries into design contests for various small arms. Uziel’s patent mentioned earlier was his contribution; the self-named “Uzi.” 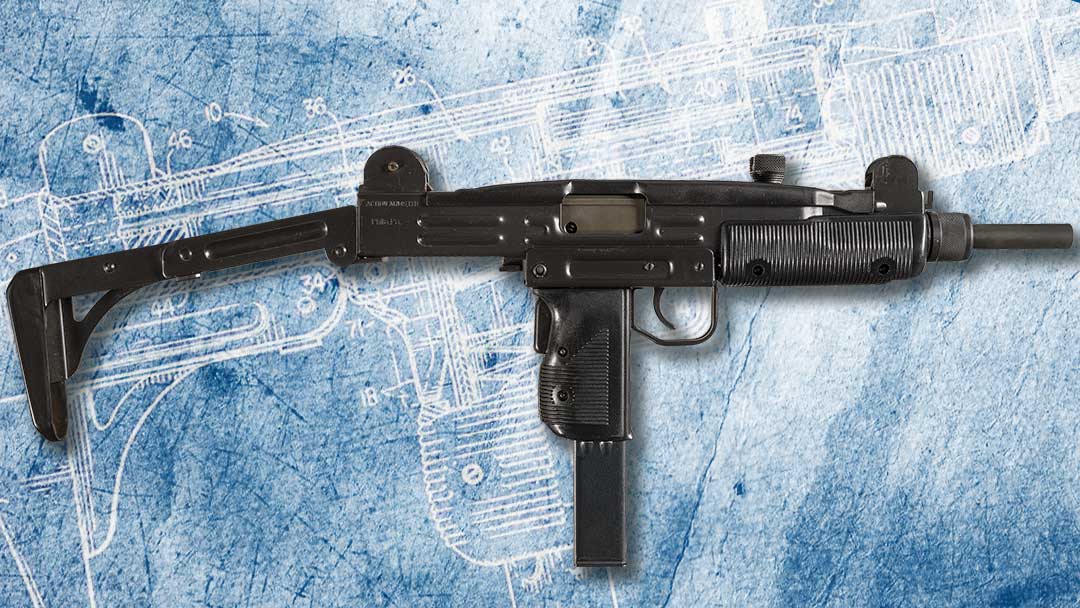 The IDF adopted the Uzi in 1954, just six years after the modern State of Israeli was established.

Borrowing heavily from the Czech SA 23 which saw some use during Israel’s early years, the Uzi was designed with economics and simplicity in mind. The weapon was constructed primarily of stamped metal, which meant that it was cost efficient and easy to produce; both critical features for a rapidly growing nation with a fledgling economy that needed to quickly bolster its arsenals. 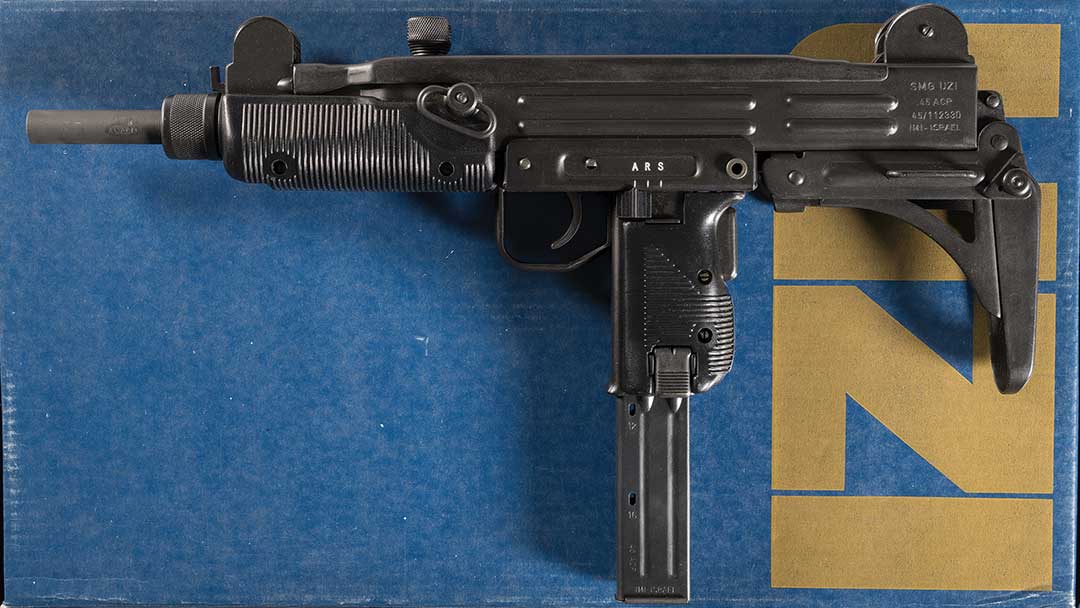 In its original configuration, the Uzi fires from an open bolt: meaning that when cocked, the bolt remains to the rear and when fired the bolt slams forwards, chambers a cartridge, and fires it. The force from the fired cartridge pushes the bolt back and the fun continues so long as the trigger is held down. While capable of fully automatic fire, the Uzi also can be set to shoot in semi-automatic. Due to the simplistic nature of the open bolt design it plays into the low-cost aspect of the Uzi. 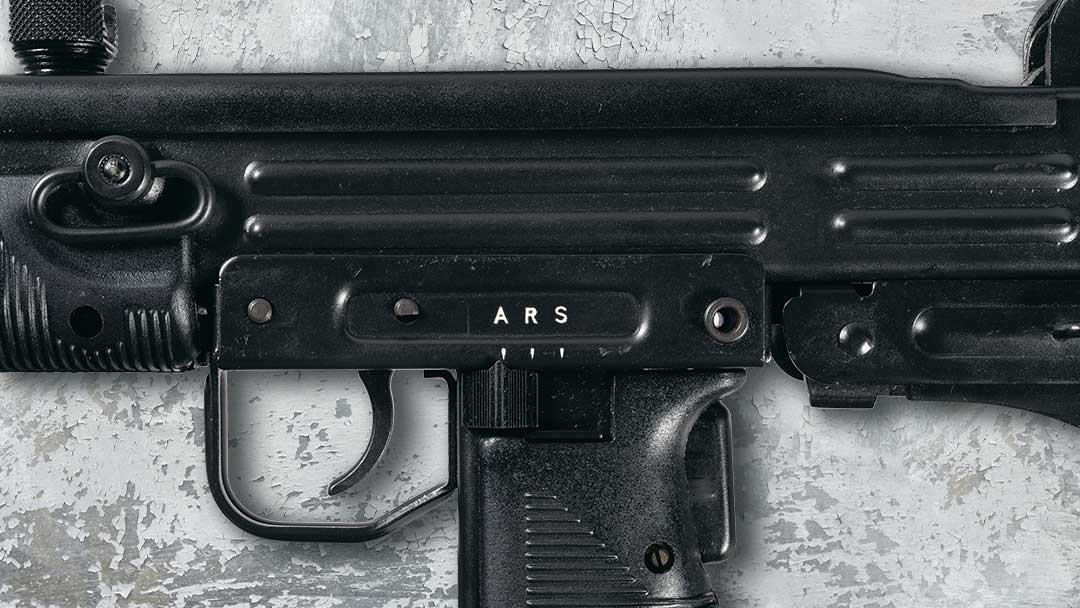 This I.M.I. manufactured full auto Uzi, example was imported into the United States by Action Arms Limited of Philadelphia, Pennsylvania prior to the 1986 registry cutoff.

Internally, the Uzi contains very few moving parts which means that field stripping is an easy process. The magazine is inserted into the grip which is located in the center of the gun. This setup makes for a well-balanced weapon. The inclusion of a folding stock located on the back of the weapon allows the shooter to shoulder it when firing. Since it is chambered in the low-recoil 9mm Parabellum surprising accuracy can be achieved with the stock deployed, even when firing on full auto.

The Uzi in the Field

A compact weapon such as the Uzi was designed to fill a particular niche in the IDF arsenal. While arguably the most famous Israeli weapon, it was not issued to standard rank-and-file troops, the venerable FN-FAL filled that role. The Uzi was intended for paratroopers, armored crews, and Special Forces that often saw themselves fighting in close-quarters situations. 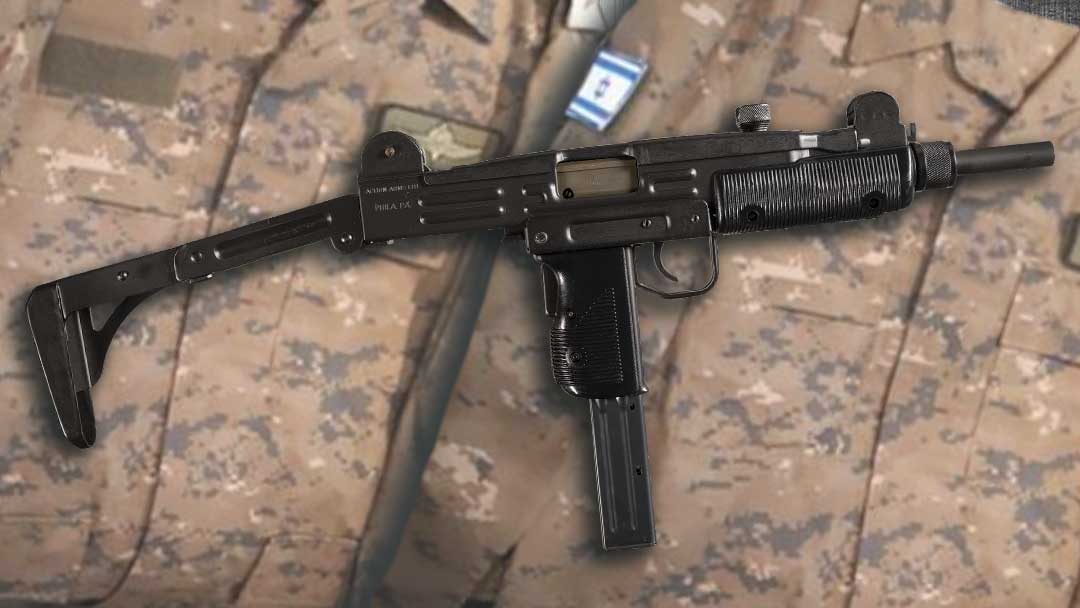 From the 1960s to the 1980s, the Uzi was the most popular SMG with militaries, law enforcement, and security forces around the globe.

It was first fielded in 1956 by IDF paratroopers fighting in the Sinai Peninsula. Cave systems inhabited by Egyptian soldiers were a perfect venue for the Uzi’s debut, and it served its purpose with flying colors. As the years went on though, the Uzi began to appear less and less in IDF hands but found its way into the hands of many others. Below is a photo taken shortly after the attempted assignation of Ronald Regan. In it Robert Wanko, a member of his Secret Service security detail, can be seen quickly bringing an Uzi into action. 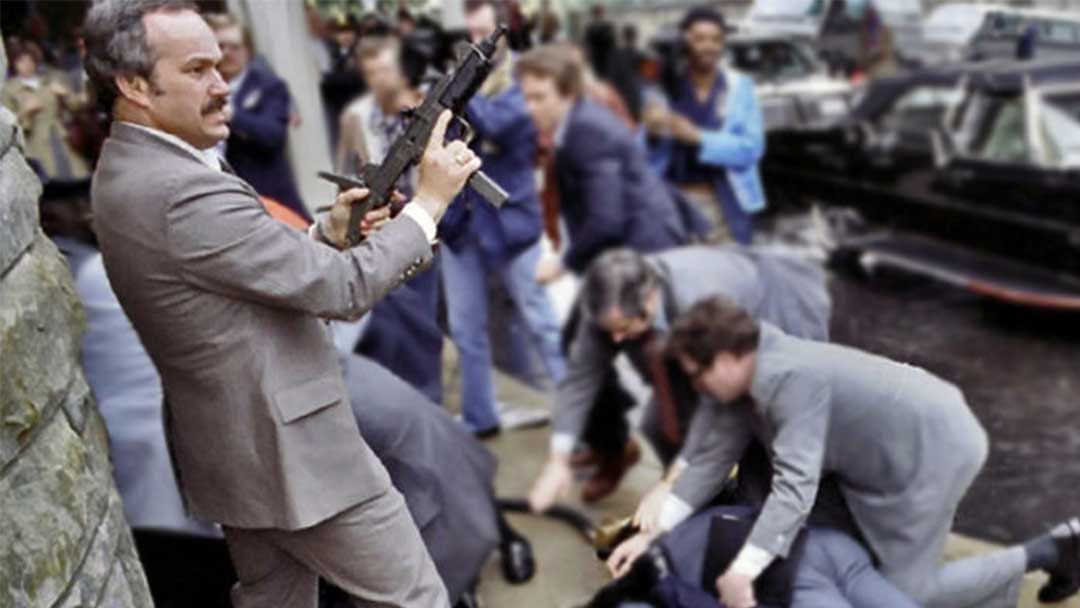 As the president’s protection detail scrambled in response to the shots fired, Secret Service Agent Robert Wanko deployed an Uzi concealed in a briefcase to cover President Reagan’s evacuation.

In fact, the Secret Service commonly utilized the platform due to its compact nature and the ability to put a notable volume of fire downrange. As well, American troops faced off against Uzi wielding troops during the invasion of Grenada in 1983, and the British faced them during the Falklands war in 1982. Uzis were made in Israel by Israeli Military Industries (I.M.I), but were also made by FN under license by the Israeli government.

The Uzis mentioned above were fully automatic versions intended for use by police and militaries, but in 1980 IMI began producing a semi-automatic version of the Uzi intended for sale to civilian buyers. These models were produced with 16” barrels to comply with ATF laws regarding short barreled rifles. As well, modifications were made allowing them to fire semi-auto only through a closed bolt system. 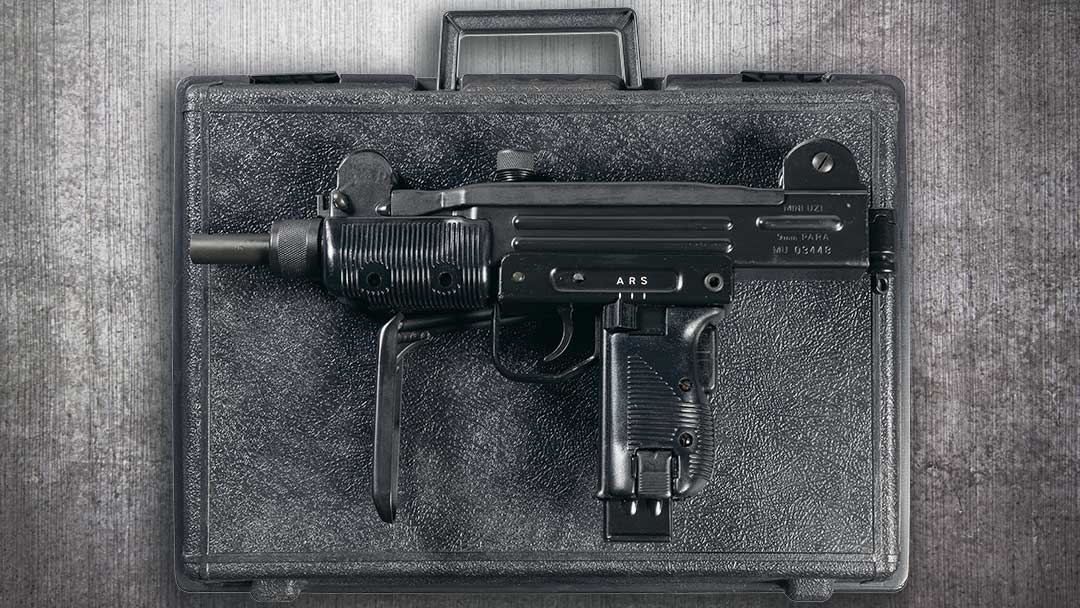 Certain weapons designed to utilize an open bolt system (the Uzi included) were deemed by the ATF to be readily convertible to fully automatic, thus a closed bolt system needed to be devised for sale in the U.S. There were many semi-automatic variants made for the civilian market, including those with fixed wooden stocks designed for carbine use. Others were known as the Micro-Uzi which had no stock, a smaller frame, and a short barrel. Yet many retained the traditional Uzi folding stock and aesthetically matched the traditional design sans a longer barrel. 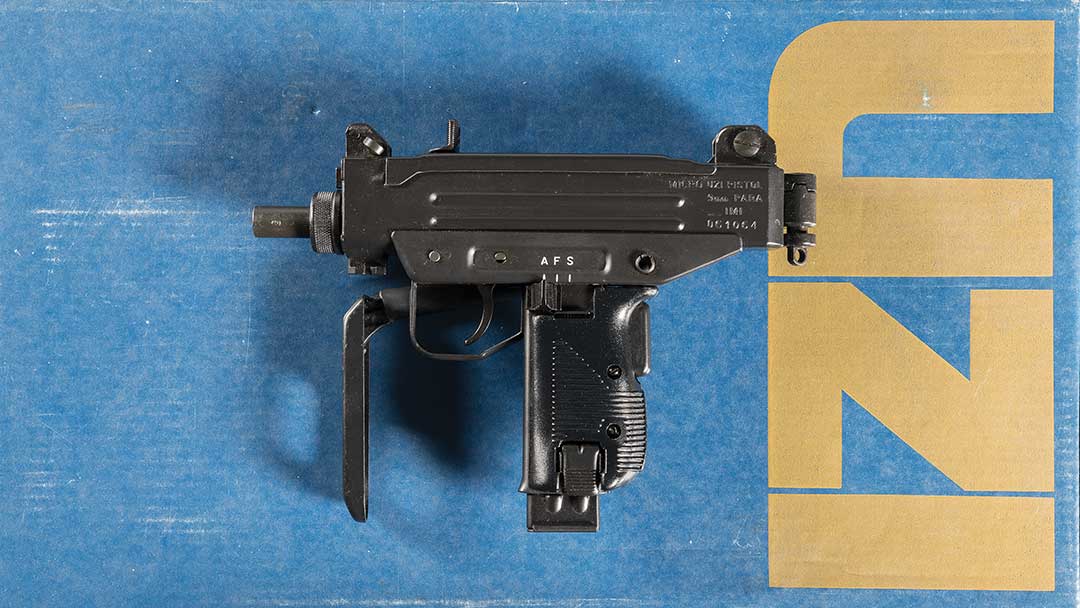 The least common Uzi on the market today, the Micro variation was introduced in 1986, and this example was imported into the U.S. just prior to the 1986 registry cutoff.

Buying and Selling an Uzi

Rock Island Auction is always ready to help build Class III collections, and we are fortunate to have Class III Uzis for sale in many of our Premier auctions. Many of these Uzis were imported as semi-automatics and later converted to fire automatic, but several models offered in Rock Island Auction Company’s May Premier are proper I.M.I automatic Uzis, sold as a “Sales Sample” thus limiting potential buyers.

To say that the Uzi is in a class of its own would be an oversimplification. To many, it is THE submachine gun and for good reason. Not only is it iconic, it is economical and practical; the perfect weapon for the logistically-conscious commando. Whether you are looking to acquire a semi-automatic version, or are one of the lucky few who can acquire Class III weaponry, Rock Island Auction has an option for you. 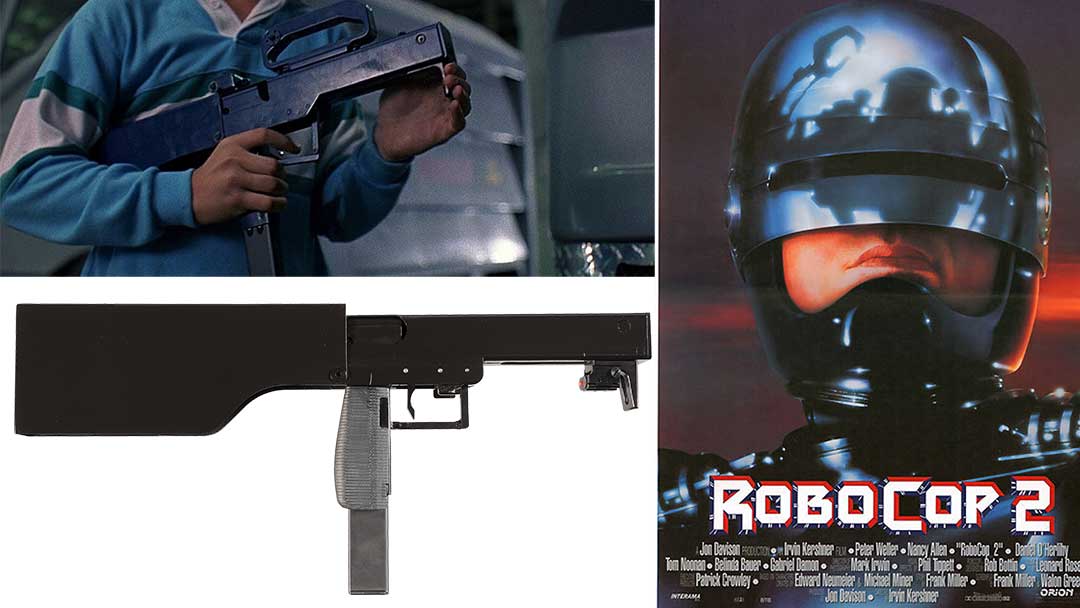 A Pearl/M6 UC SMG available in RIAC’s May Premier Auction, a limited run rarity that uses some Uzi components, and the gun never reached mass production. An M6 UC appears prominently in the film Robocop 2. 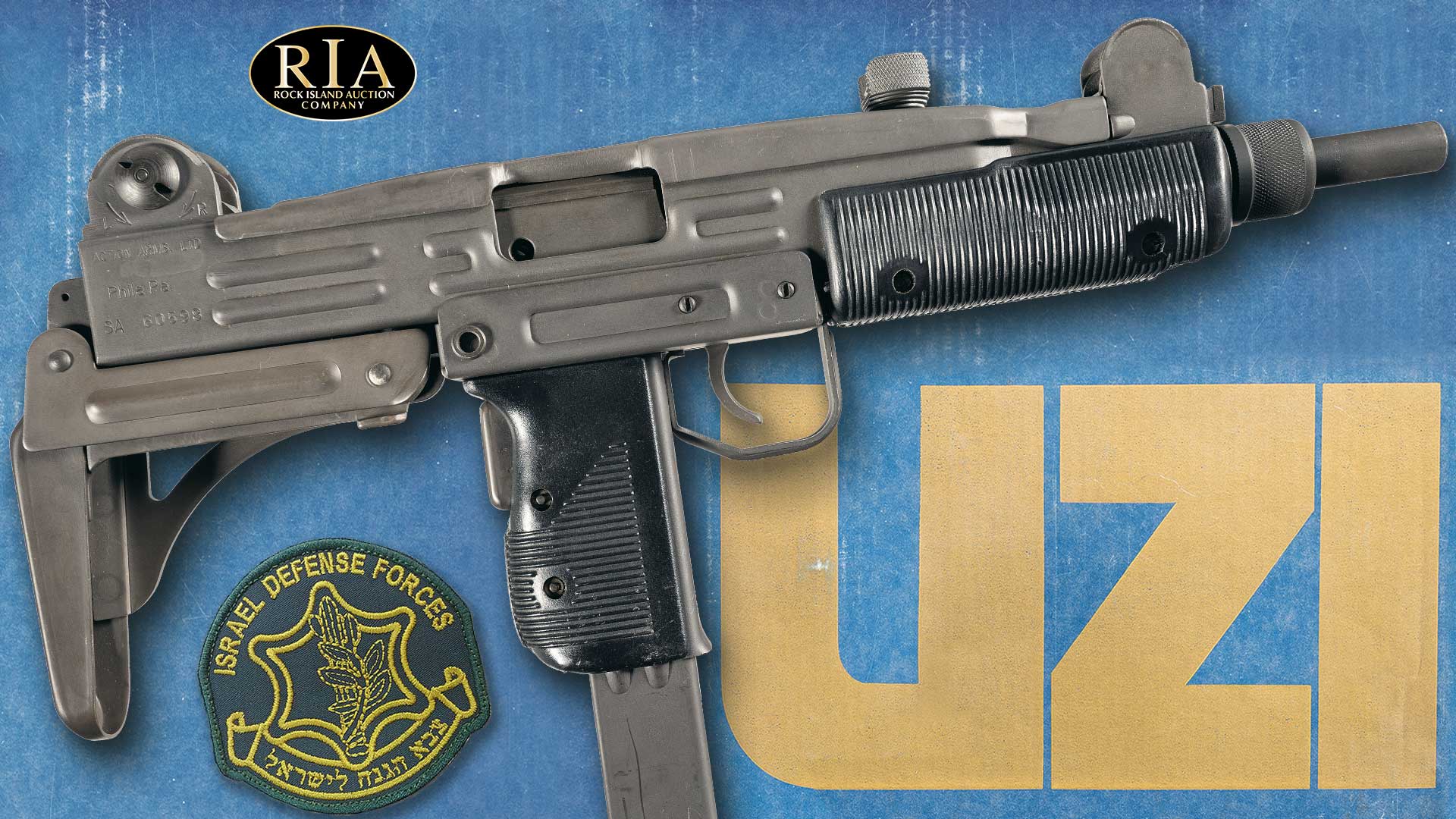