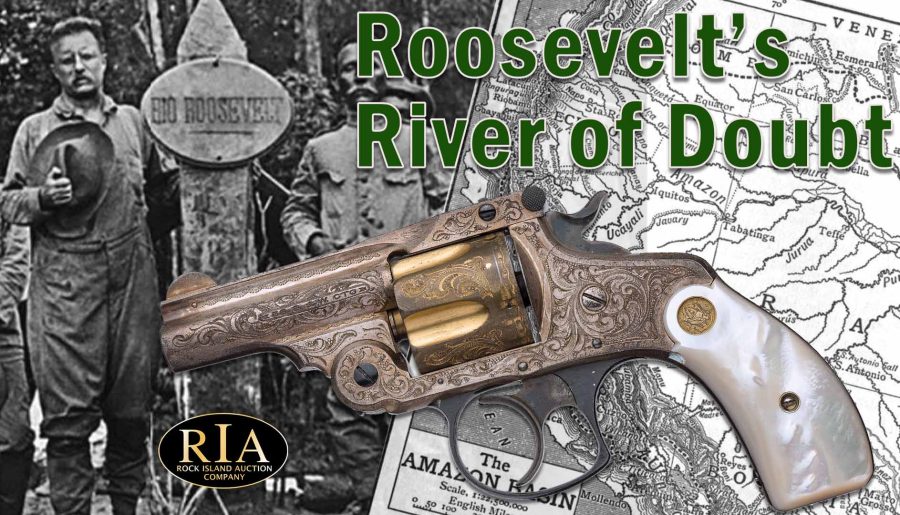 Following his stinging defeat in the 1912 election, President Theodore Roosevelt planned a trip to South America with a lecture tour and river expedition in the works.

On the trip he exchanged one river expedition meant as an enjoyable excursion for another that was far more dangerous. That trip, on the River of Doubt, veered into a fight to stay alive.

An engraved nickel and gold plated Smith & Wesson .38 Double Action 4th Model Bicycle revolver Roosevelt carried with him to South America and bestowed as a gift to an Argentine university president on his speaking tour is available in Rock Island Auction Company’s May 13-15 Premier Auction. Engraving on the short-barreled gun was done by master engraver L.D. Nimschke or his shop. 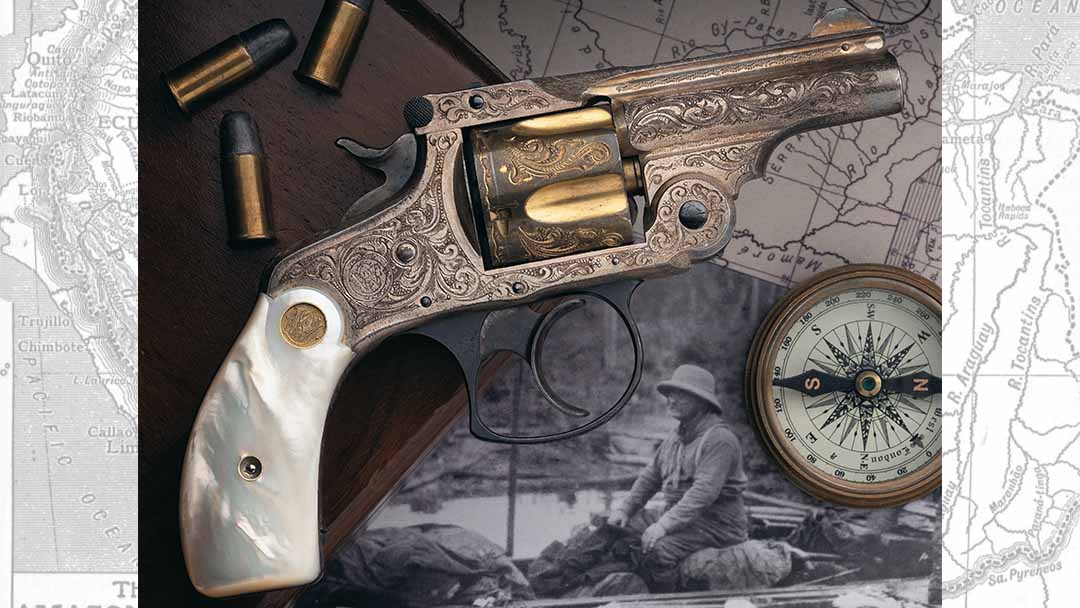 Lot 238: This engraved nickel and gold plated Smith & Wesson .38 Double Action 4th Model Bicycle revolver is an extreme rarity as well as the gift of Theodore Roosevelt to a former Argentine university president on a trip to South America in 1913.

As one who enjoyed “the strenuous life,” Roosevelt, who was 55, wasn’t one to sit around and let his defeat to Woodrow Wilson gnaw at him. He accepted an invitation to South America for a series of lectures as well as a river tour to collect flora and fauna samples.

A friend, Rev. John Zahm, a Roman Catholic Priest who had traveled extensively in South America, invited Roosevelt on the expedition. An off-hand comment by a Brazilian official suggested an expedition of the unmapped River of Doubt that feeds into the Aripuanã River. The Aripuanãmeets the Madeira River, the Amazon River’s largest tributary. The River of Doubt hadn’t been officially named since it had yet to be explored.

“I thought of making the trip a zoological one only, but in Rio de Janeiro I learned there was a chance of our doing a work of geographical importance,” Roosevelt later wrote. 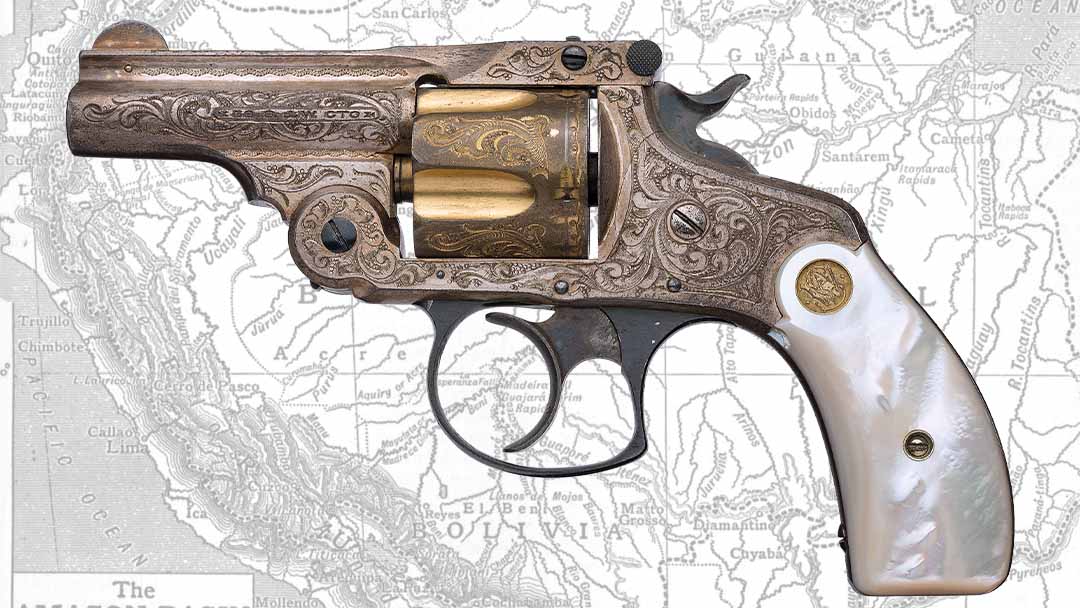 This extremely rare .38 caliber Smith & Wesson Double Action 4th Model Bicycle revolver as some amazing engraving from the shop of L.D. Nimschke or by the master engraver himself.

Roosevelt, despite the risks, wanted to take on the River of Doubt. The director of the American Museum of Natural History, a sponsor of the original expedition, warned against the danger.

“If it is necessary for me to leave my bones in South America, I am quite ready to do so,” Roosevelt wrote.

Col. Candido Rondon was a veteran of the Amazon forest, a former military officer who led the effort to install telegraph lines through the jungle served as co-leader of the party. He was aware of the dangers faced by the expedition.

He and Roosevelt discussed what to expect, the former president wrote, “such as poisonous insects and the fevers they cause, dysentery, accidents in the rapids, and starvation!”

The expedition party traveled upriver by steamboat to a remote town where it began an overland trek to the River of Doubt. Several men fell ill and half of the pack animals died of exhaustion. Further complicating matters, it was discovered that the provisions were more for a cruise like Zahm had in mind than a tough river adventure. There was olive oil, tea, sweets and Rhine wine, but not enough necessities like dried food and salted meat. 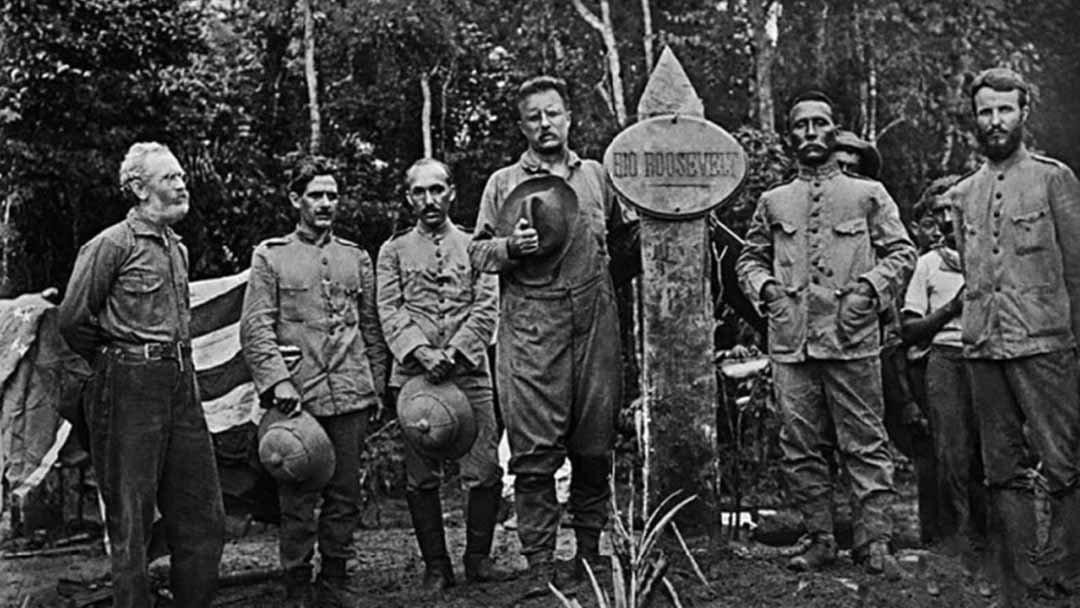 President Theodore Roosevelt stands next to a marker with the new name of the River of Doubt, Rio Roosevelt, or Roosevelt River. Naturalist George Cherrie is on far left. To the right of the marker is Col. Candido Rondon, who co-led the expedition, and Kermit Roosevelt, the president’s son.

Before setting off on the River of Doubt, the expeditionary team downsized due to the lack of proper supplies. In February, 1914, the party started out with the former president, his son, Kermit, Rondon and his assistant, a doctor, naturalist George Cherrie, and several porters. The number was 22.

Dangers of the Amazon

From the start, the expedition faced the threat of alligators, piranhas, and hostile natives. Roosevelt wrote of being overwhelmed by “torment and menace” from mosquitos and stinging flies.

A venomous coral snake nearly bit the former president who was saved by the thick leather of his boot. Still Roosevelt was captivated.

“It was interesting work, for no civilized man, no white man, had ever gone down or up this river or seen the country through which we were passing,” Roosevelt later wrote. “The lofty and matted forest rose like a green wall on either hand.”

Indigenous people, later learned to be hostile to outsiders and cannibalistic, were stalking the party. Rondon, the Brazilian, forbid anyone to go deep into the jungle after discovering his hunting dog shot with arrows. 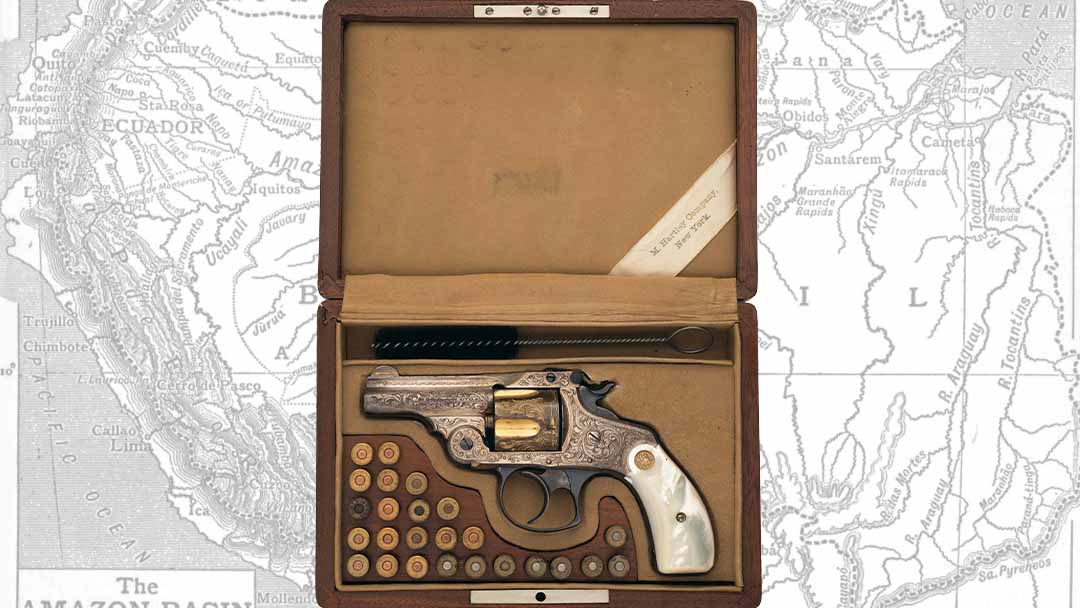 By March the expedition faced treacherous rapids and had to decide whether to shoot through them or portage through the jungle. Several canoes were destroyed, causing delays as new ones had to be made. They were making about seven miles per day.

On one occasion, daring the rapids turned fatal. A canoe carrying Kermit Roosevelt and two other men was sucked into a whirlpool then sent over a 30-foot waterfall. Kermit and one of the men escaped. The third, a Brazilian, drowned.

Men were overtaken by malaria, dysentery and suffering as supplies ran low.

Roosevelt, attempting to rescue a canoe in a series of rapids, suffered a nasty gash on his leg. Easily treated in civilization, the wound quickly got infected, leaving the Rough Rider delirious from fever as high as 105 degrees and begging to be left behind. His son wouldn’t hear of it.

“There were a good many days, a good many mornings when I looked at Colonel Roosevelt and said to myself, he won’t be with us tonight,” naturalist George Cherrie later remembered. “And I would say the same in the evening, he can’t possibly live until morning.” 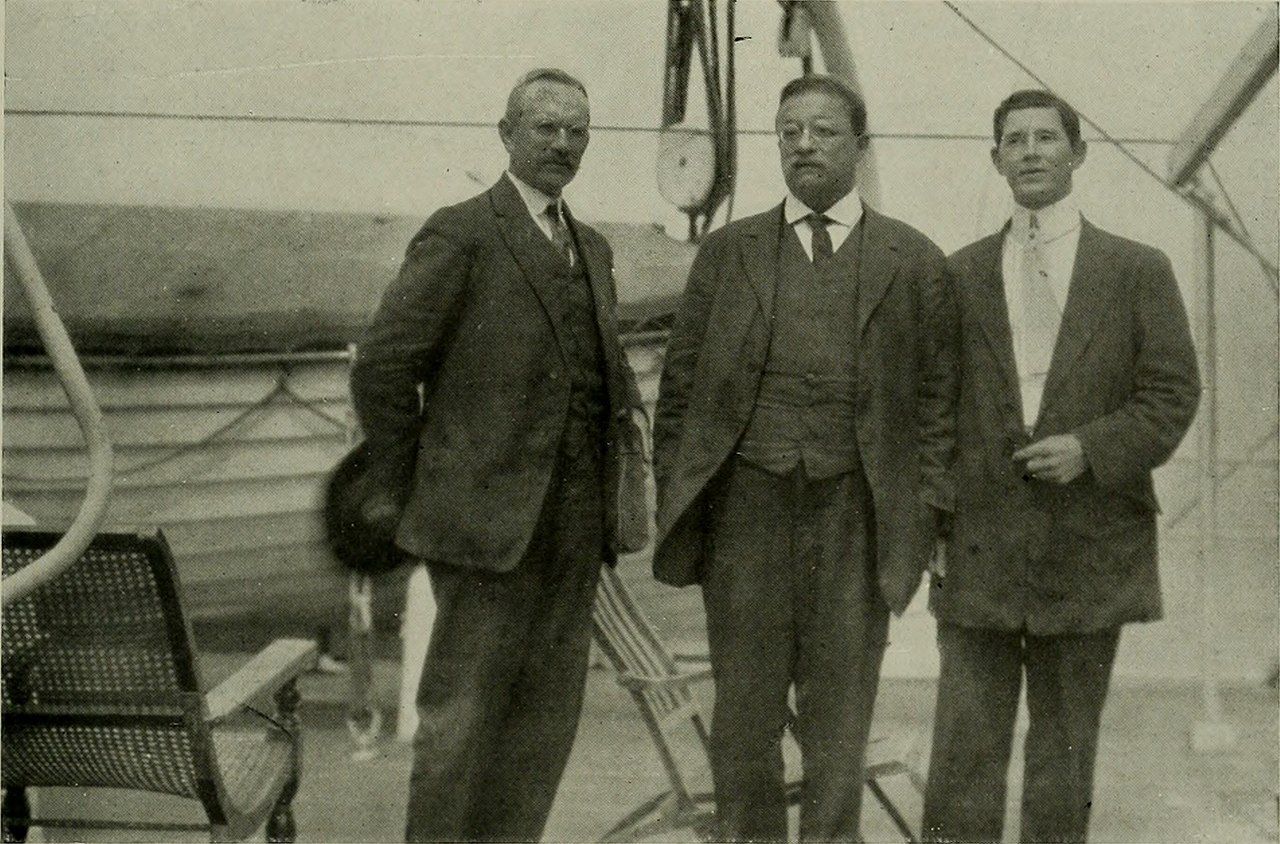 Former president Theodore Roosevelt with naturalist George Cherrie to his right. The men explored the River of Doubt in South America in 1914.

Cherrie would eventually be a veteran of 40 expeditions in his career and have several species, including a lizard, birds, and a pocket gopher named after him.

Eventually, on a muddy riverbank, the expedition’s doctor was forced to operate without any type of pain reliever for the former president. No matter, the doctor cut away the dead flesh and Roosevelt, who lost nearly 60 lbs. began to improve.

One night, a Brazilian porter was caught stealing food. He fatally shot the man who caught him and fled into the jungle. The party couldn’t find the fugitive and left him to his fate.

In April, the expedition started seeing signs of civilization. They recognized rubber trees tapped for their sap by Brazilian pioneers who had pushed into the jungle. Some of the pioneers were generous to the ragtag expedition and provided new canoes and food.

At his first opportunity, Roosevelt sent off a telegram to the Brazilian government declaring the expedition, “a hard and somewhat dangerous, but very successful trip.”

By the time Roosevelt returned to New York in May, 1914 he was strong enough to walk down the gangplank to meet well-wishers.

Roosevelt was met by critics about the extent of his role with the expedition, but a lecture tour of the United States and Europe quickly silenced them. The party brought back 2,000 species of birds and 500 mammals for the American Museum of Natural History. 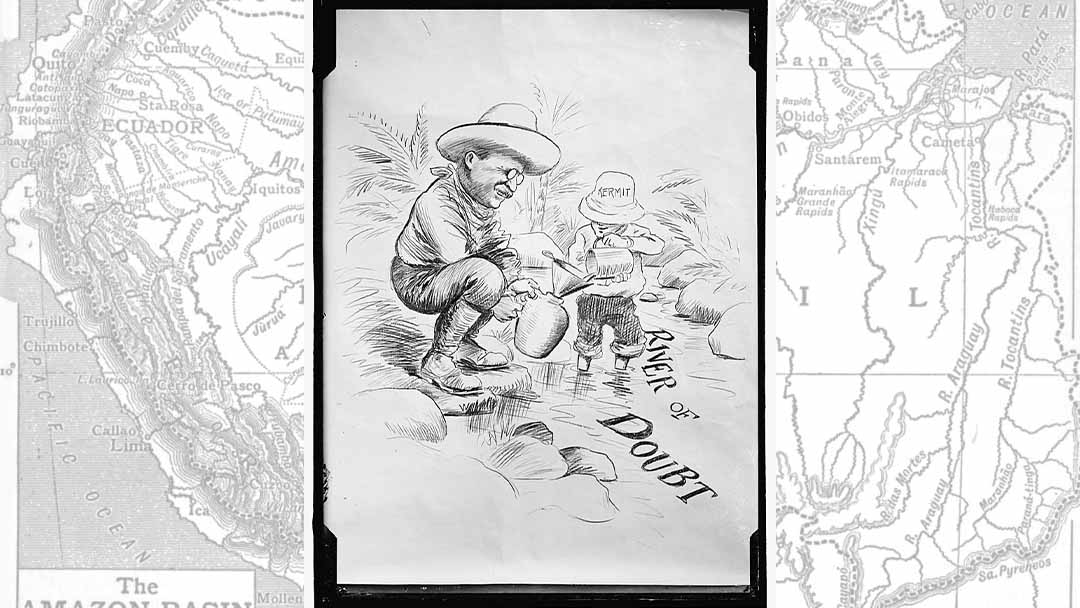 Theodore Roosevelt was met with naysayers who didn’t believe the events of the expedition. He proved them wrong on a lecture tour of the U.S. and Europe.

The expedition took its toll on Roosevelt who suffered from recurring malaria for the rest of his life that he called “old Brazilian trouble.” He died in 1919 at the age of 60.

An expedition launched on the renamed River of Doubt, now Roosevelt River, in 1926 confirmed nearly everything the earlier expedition did. Rondon, as the leader of the first expedition, was responsible for naming the river and chose to name it after the 26th president.

The engraved short-barrel Smith & Wesson .38 Double Action 4th Model Bicycle revolver, with its silver barrel and frame and gold-plated cylinder is an extreme rarity in Smith & Wesson collecting. The engraving is from the workshop of famed engraver L.D. Nimschke. These double action revolvers are rarer than their Safety Hammerless cousins, especially special order short-barrel versions so this is a nearly impossible to find Smith & Wesson model. 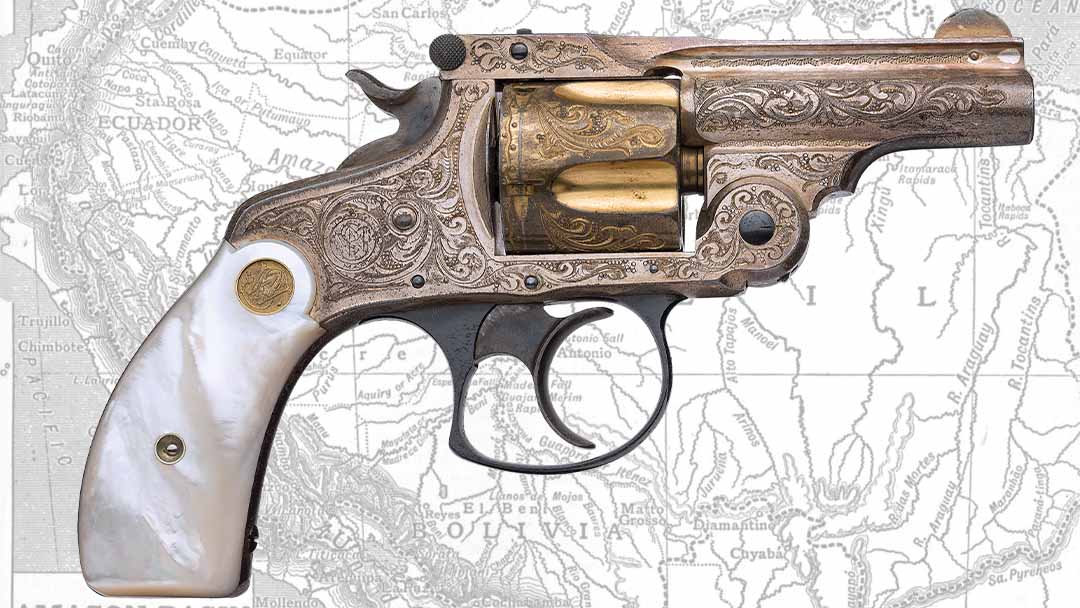 Lot 238: An extreme rarity, this engraved short-barrel Smith & Wesson .38 Double Action 4th Model Bicycle revolver was a gift given by President Theodore Roosevelt on a South American tour before departing for an expedition that tunred out to be a fight for his life.

Heap on it being a gift from one of America’s most beloved presidents and the revolver’s value increases even further. The gun is accompanied by a statement of provenance in Spanish by the great-grandson of the original owner, Dr. Figueroa Alcorta.  The statement says the revolver “was given to my great-grandfather Dr. Figueroa Alcorta when the ex-President of the United States of America, Theodore Roosevelt, visited the country in 1913.” Argentina is the country referred to in the statement, and in the statement the revolver is identified by serial number and short description of gold and silver plating and pearl grips as well as a description of the accompanying retailer box. Alcorta is a past president of the University of La Plata in Argentina so likely met the former president on his lecture tour ahead of the expedition. The history, rarity and provenance of this Smith & Wesson makes this an amazing and highly desirable piece of gun memorabilia. 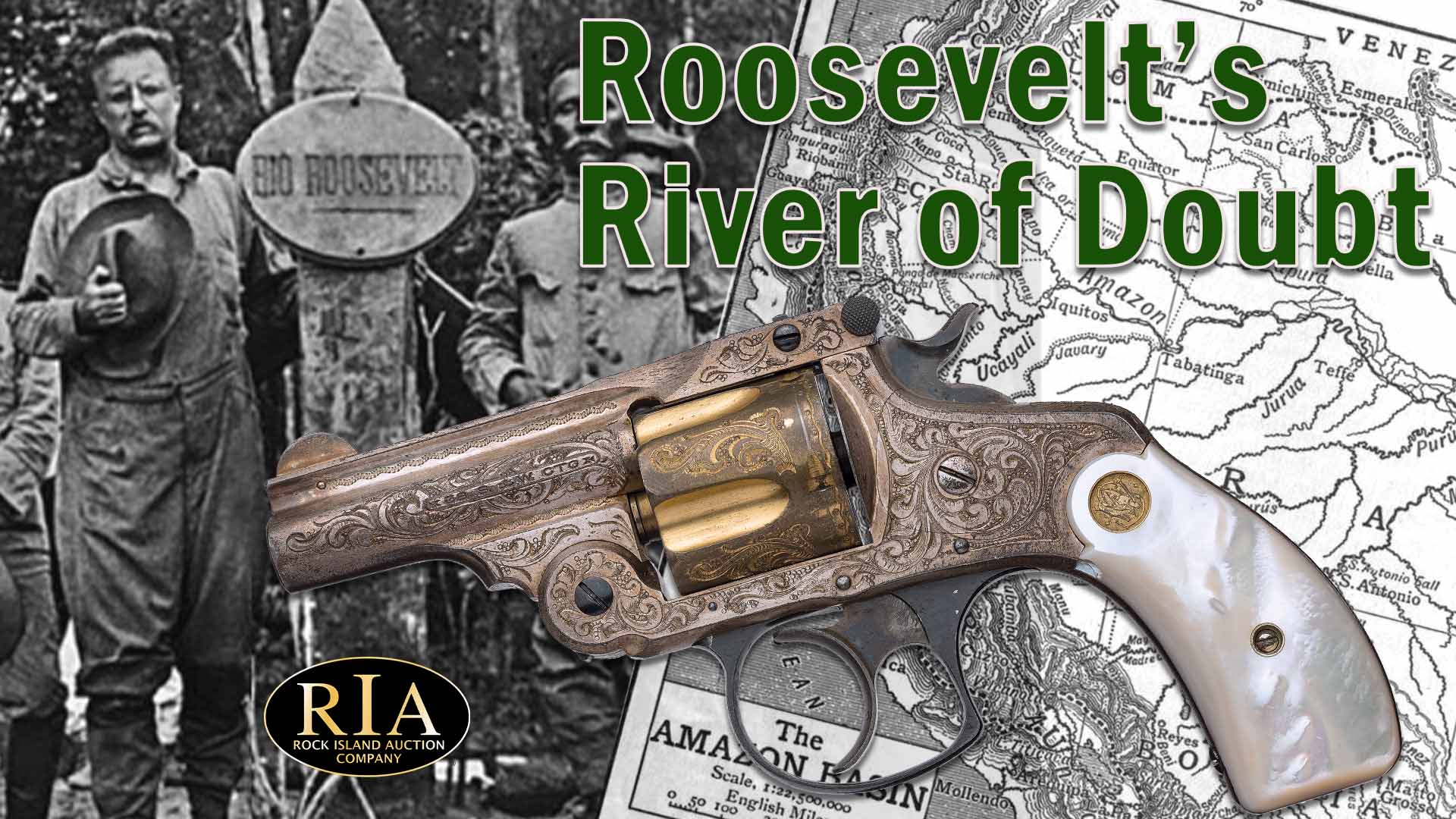