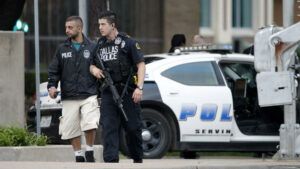 We are all saddened by the tragic loss of innocent life in Uvalde, Texas. As a parent, I share the instinctive desire to ensure my child is safe, especially in school, a sanctuary for learning and personal growth. As a former police officer, I know more needs to be done and no, the answer isn’t gun control. The actions of someone intent on doing harm — coupled with existing security policies and even the failures of law enforcement, as we saw in Uvalde and Parkland, Florida, to respond to life-threatening situations with equal and timely force — can lead to deadly consequences at a school or other public location.

Part of my law enforcement career was spent working as a school resource officer in Florida. I was charged with protecting our most cherished of resources: our children. I made it my mission to ensure the safety of the children entrusted to my care. I would have given my life, if necessary.

But the hard truth is that I was just one cop on the campus; I couldn’t be everywhere at once. I patrolled the grounds, I made sure the gates were locked and the doors were shut, and I kept watch for strangers. Still, one officer is not enough, given that most modern schools are vast and sprawling.

We must be honest about what makes a school safe, and right now, as a society, we are not being serious. The desire to “do something,” has been met by politicians actually enacting counterproductive legislation. It’s time to reverse course.

Urgently, we must repeal the federal legislation making schools gun free zones. The idea that criminals will be kept at bay by drawing an imaginary boundary where guns are prohibited is asinine.
This mandate creates a false sense of security for those who think danger can be legislated away, while turning our K-12 campuses into soft targets and, in the process, disarming good people who could actually help.

Last I checked, murder has been illegal since the Legal Code of Ur-Nammu. This is the oldest known set of laws. It hails from Mesopotamia, is written on tablets in the Sumerian language, and dates to roughly 2100–2050 BCE. Do you mean to tell me nobody’s committed a murder in over 4,000 years?

Despite the fantastical wishes of some on the Left, defining an act as prohibited and punishable by law does not fully prevent it. Rather, it is meant to act as a deterrent and ensure that justice can be served against those who violate society’s edicts.

So, what will stop a bad person when they choose to violate society’s rules, in this case, invading a school with the intent to harm our precious children? Most effectively, a good person or persons who are armed and able to fight back at a moment’s notice.

When seconds count, even if the police act perfectly, they are often still minutes away. The concept of leaving our children defenseless, and more astoundingly, preventing those we entrust to educate and protect them unable to do so, is wrong and has cost lives.

Since we as a society — we as parents — trust people enough to spend hours a day with our children, for 180 days a year, it is illogical to prevent those same teachers and administrators from arming themselves if they are willing and able to do so. I stand ready to help train them, as do law enforcement agencies and gun rights groups like Gun Owners of America.

We can harden schools all we want, and it can help mitigate the actions of someone hellbent on causing harm. But at the same time, it is undeniable that, when seconds count, the police can be minutes to an hour away.

As a parent, ask yourself if there’s any serious harm in armed school staff trained in life-threatening situations? As a former cop and parent, I know what my answer is.

If our politicians and our money are important enough to receive armed protection, so too are our children. We must repeal gun free school zones and empower our teachers and staff to fight back and keep those under their watch safe.

Read more at The Daily Caller