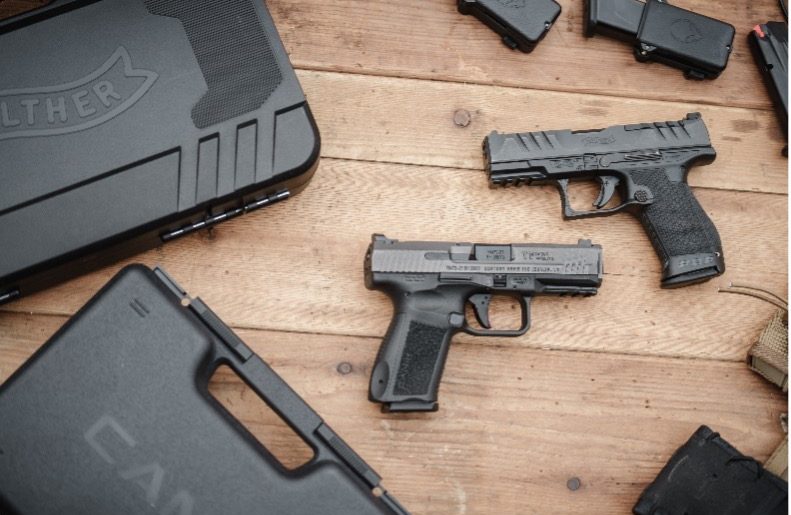 For those who are looking for a new handgun, be it your first gun or your thirty first, but are looking for something other than a Glock or M&P, you have only to look as far as your local gun counter to see some other names entering the conversation. Should you go for a name with all the bells and whistles by getting a Walther PDP Compact? Or how about that interesting new gun with the little red trigger safety called the Canik TP9 SF Elite? You see the price tag and think “Hey, I could get that one and have some money left over for practice ammo.” 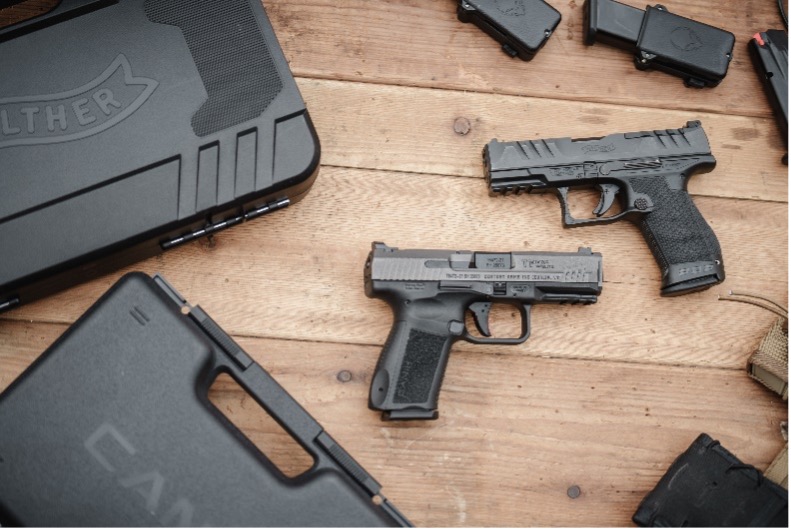 The Walther PDP is a relative newcomer to the market, but it possesses the Walther name which gives it a pedigree that, let’s be honest, owes a great deal to a certain British Agent with a flair for Aston Martins. Regardless of what spy agency you work for, there is a lot of buzz around the PDP being one of the best of the poly-frame/striker-fired pistols to hit the market in recent years.

The Canik TP9 SF Elite has been around a while (since 2017) and been somewhat of a slow burn. A lot of people insist it’s a total sleeper, overlooked because of the price tag. Maybe it’s the price tag. Maybe it’s the fact that Canik is a Turkish company known for airplane parts. Whatever the reason, when a holster company gets as many requests for a Canik holster as we did, you begin to look deeper into the firearm everyone is starting to catch on to.

In an effort to always bring you the information you need (or maybe just want), we thought we’d shoot them side by side and see which is “better.” We want to know what the differences are, how much of a difference it makes, if there’s a reason you might pick one over the other and so on.  First we will look at the firearms individually. 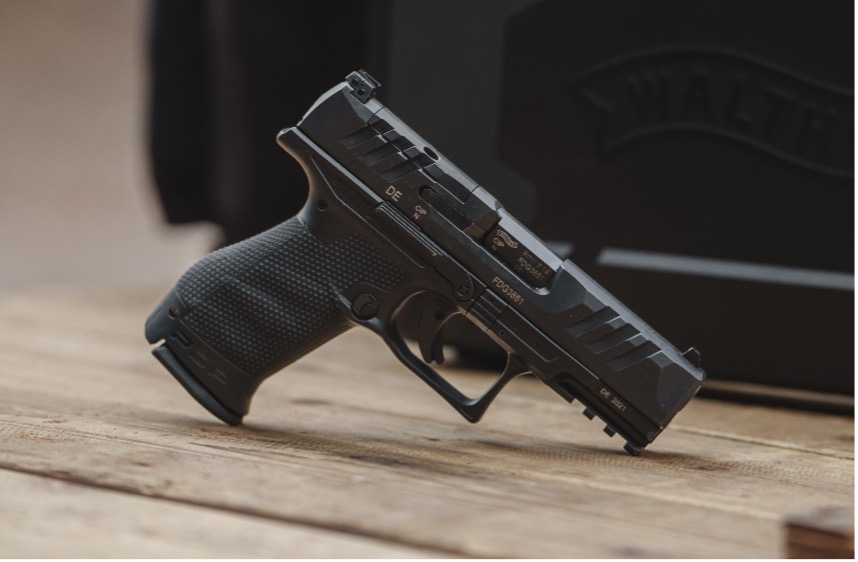 The Walther PDP or “Performance Duty Pistol” is essentially an updated PPQ and even uses most of the PPQ’s parts. If the PPQ is the standard Toyota truck, the PDP is the TRD model.

The slide and frame have been beefed up and squared, with more aggressive cocking serrations that consist of large section of the slide being removed. The frame is similarly a little more squared, with revised texturing. The finger grooves are gone, and the rear shelf of the frame is a little longer than the PPQ.

These ergonomic changes provide a good firing grip in a hurry, and the pistol – typical of Walther’s modern firearms – just feels natural in the hand. The serrations are so aggressive that they are very easy to use even with heavy leather gloves on.

The trigger has been refined, with a glass-smooth uptake, defined wall and crisp break at about 5.5 lbs. Walther has always had the best of the factory striker pistol triggers and the PDP might be the best yet. Walther also offers a Dynamic Performance Trigger, with a 3.8-lb break and flat trigger blade.

The PDP has some party pieces, however.

The entire gun is said to be modular in that there are three frame sizes (compact, compact long slide and full size) and three slide/barrel assemblies (4″, 4.5″ and 5″). Walther made a weapon that allows all frames work with all slides/barrels which allows for serious versatility in the size and set-up. In this area, Walther seems to be taking their cues from guns like the Sig Sauer P320 which won the Army’s Modular Handgun System (MHS) competition in 2017. 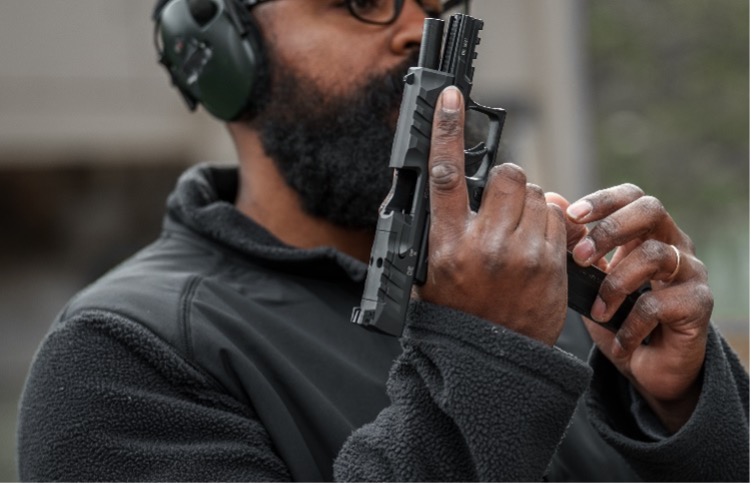 Second, the PDP comes optics-ready on all models. Walther has milled the slide for use with adapter plates rather than for a particular optic footprint, which means the Walther can accommodate many different optics if you have the correct adapter plate. The adapter plates are made for Walther by C&H Precision. Once you have chosen an optic (or if you already know the optic you want) Walther will send you one free adapter plate to accommodate the optic you’ve chosen. You have to buy from then on, however.

Full disclosure, the Walther we tested did not have a red dot sight, but according to Walther, the frame ergonomics on the PDP are optimized for red dot shooters. Some owners and reviewers have commented on how easily the dot appears during the presentation. The Walther is found to be reliable, and shockingly accurate for a gun at its price point and design.

In terms of optics-ready pistols for a price point of $700ish (MSRP is $699) it’s a fantastic value for money. There isn’t much room for improvement (on paper, anyway) and the PDP is getting a reputation for being one of the best out-of-the-box pistols you can buy. 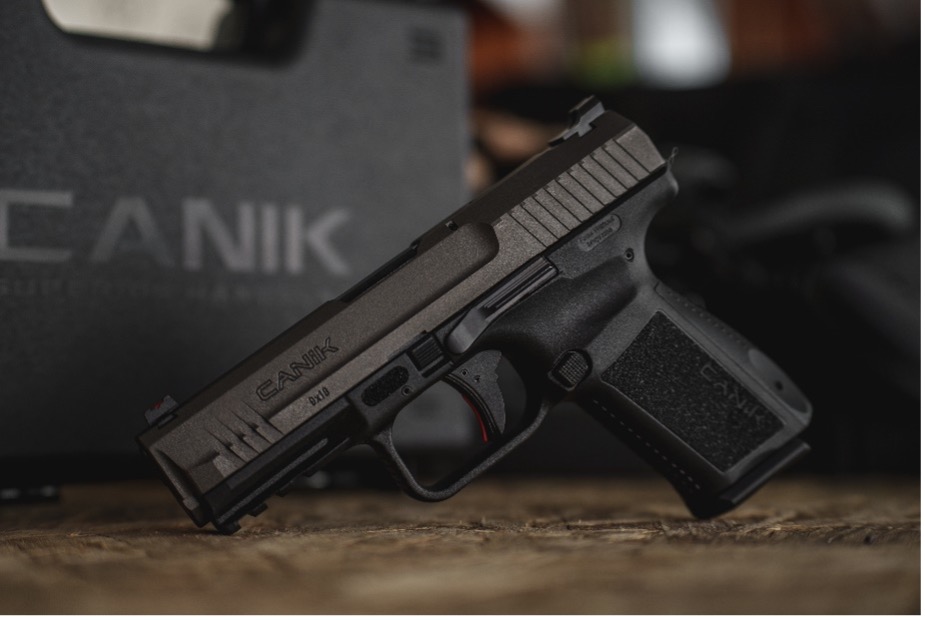 The primary selling point of the Canik TP9 pistols has been that they’re budget-friendly but a little more performance-oriented than other guns of the same (or similar) price point. That’s still the case for the TP9 SF Elite, which is the compact(ish) variant of the TP9.

For those unaware, the TP9 is a clone of the Walther P99. Both of the DA models have a de-cocking button in the same place, the frame looks the same, the striker indicator appears in the same location on the rear of the slide.

So, with that said…

The TP9 SF Elite is billed as a “compact” model, which is somewhat of a misnomer since it’s the same size as S&W M&P9, with a 4.2-inch barrel and 15+1 magazine capacity. At its heart, The TP9 is a basic striker-fired pistol with a tabbed trigger safety and a railed frame. With the SF Elite, Canik does add some niceties such as forward and rear cocking serrations, and Warren Tactical sights with black steel U-notch rear sight and a red fiber optic front. 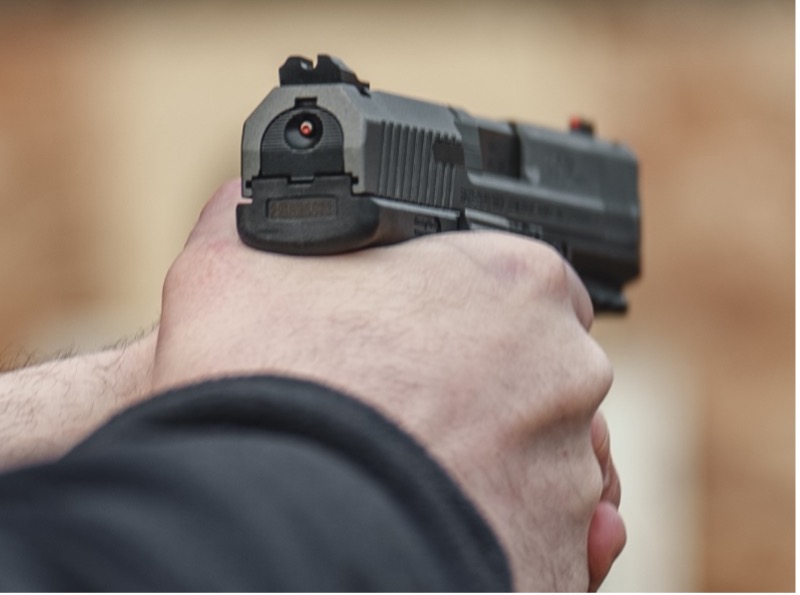 The Canik, as a Walther clone, has excellent ergonomics. The trigger guard has a modest undercut, and a fairly generous frame shelf behind the grip. There’s a thumb/trigger finger relief in the frame and indexing texture above the trigger guard. The factory trigger was impressive with smooth take-up, a decent wall, and a nice break.

Going into our testing, we knew the TP9 SF Elite and other Caniks have been found to be reliable, and reasonably accurate. Their magazines are made by MecGar which is great (they make OEM magazines for almost everyone, including Walther) and are easy to obtain for reasonable prices.

All things considered; you get quite a lot of gun for a sub-$500 price tag. MSRP on the Canik TP9 SF Elite is $429 with street prices found under $400 (closer to $350 in many cases). In a world where many guns with price tags below $400 just aren’t very good, the Canik stands out.

The Walther PDP Vs. The Canik TP9 SF Elite

While broadly the same, the Walther is a little taller and a little longer due to the longer rear slide, but almost 7oz lighter and ever so slightly thinner. Where the differences emerge are the intangibles, the stuff we that while we canwrite about, you really have to feel for yourself to truly appreciate.

To truly see how these intangibles made a difference, our range staff for this piece consisted of a law enforcement firearms instructor, a retired police officer, a proficient civilian shooter and a student of all things firearms related (yours truly). In our range testing of these guns, what we all seemed to agree on was the Walther felt better built with some better features, but the Canik was easier and more enjoyable to shoot. 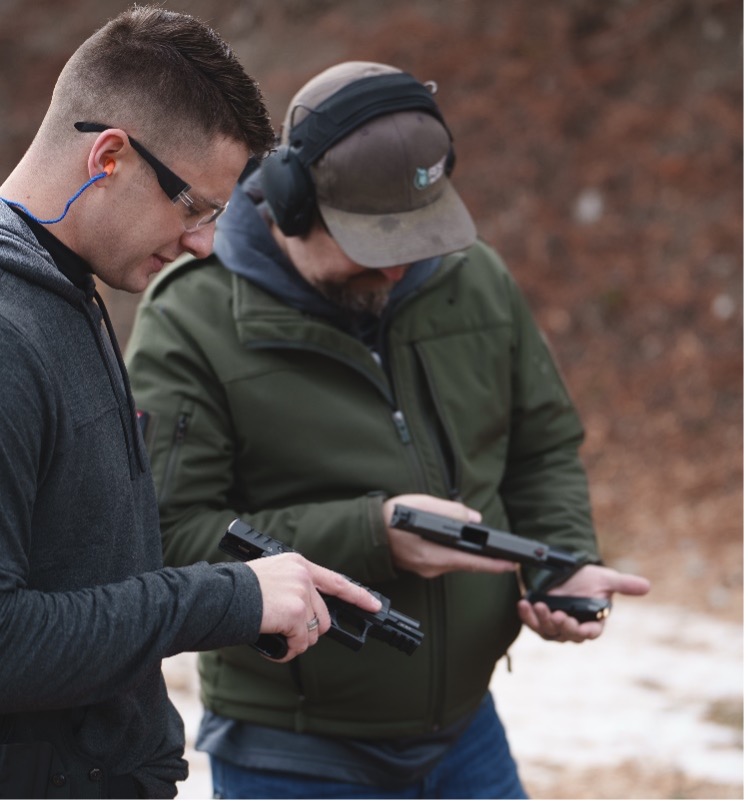 For this author’s money, the Walther has the better trigger, with a harder wall, crisper break and less creep or grit. The ergonomics are second to none. One thing we noticed was how easily the PDP was to get on target. You present the pistol out and the sights are practically aligned for you.

Most of us, with one exception, found we had to focus on placing the front sight of the Canik into alignment. However, the Canik’s factory sights – black steel and red fiber optic – were much more easily visible, to the surprise of nobody.

However, we also found that the Canik was the softer gun to shoot, as the PDP was “snappy” for a gun of its size. You could easily live with the PDP, but the Canik was more pleasant to shoot at any cadence. After some consideration, I personally suspect the Walther PDP, whether deliberately or inadvertently so, is under-sprung by a pound or two of spring tension. A little digging and I found some PDP owners reporting the addition aftermarket heavy recoil springs tame the recoil impulse considerably.

The consensus was that if we had to pick one as something like a duty pistol, the Walther gets the nod. Getting sights on target was almost intuitive within minutes; with actual practice, it would be all but autonomic. 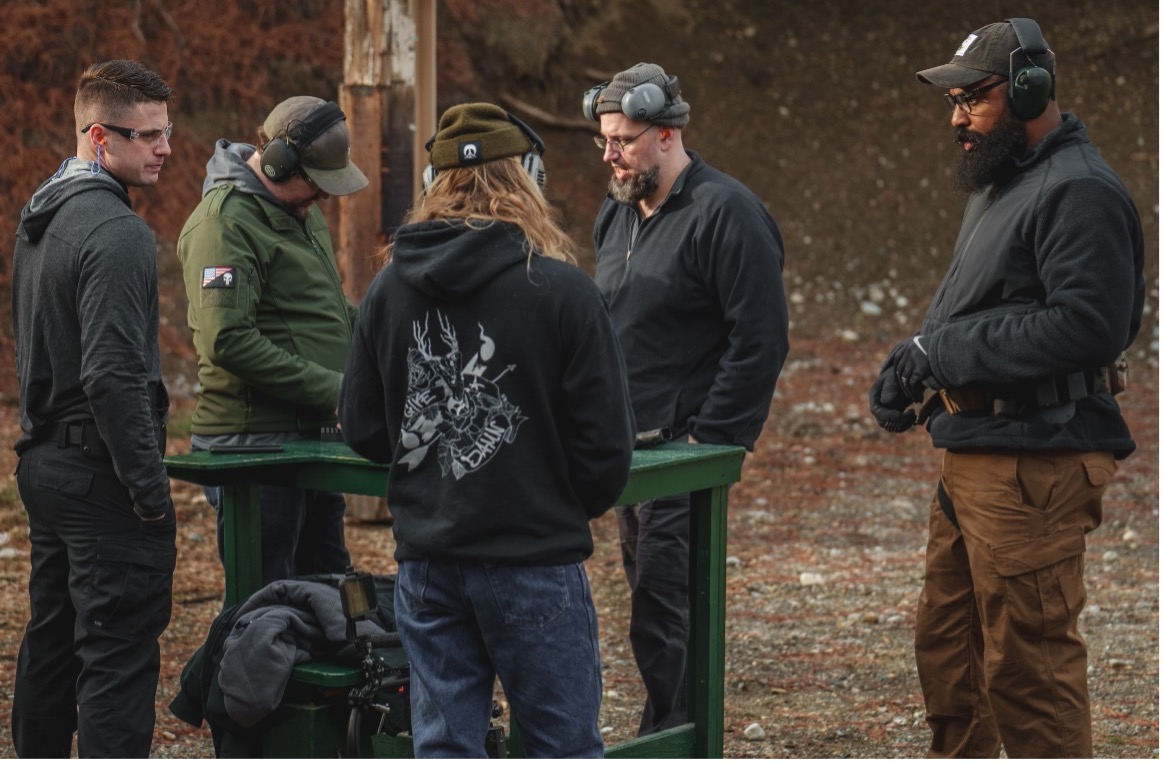 Ever hear somebody say a gun is like “an extension of your hand”? That’s what it was starting to feel like, and if you’re picking a ride-or-die gun, that’s what you want. For any purpose other than that? The Canik would get the nod.

Overall, the PDP is an excellent handgun. While the guns we used were deliberately tested in their stock configurations, we all seemed to think a few small upgrades to the PDP, such as upgraded sights and fine-tuning the springs, would make it all but flawless and we do mean that. The stock PDP is within striking distance of perfection.

That said, the bone-stock Canik is a lot of fun. We found it reliable, accurate, and easy to shoot. When you consider that they are easily found online for $400 or less… frankly we couldn’t think of a downside to it. While each of us had our opinions on which gun, we would purchase first, we all agreed we would be willing to purchase both of them. But what do we know?