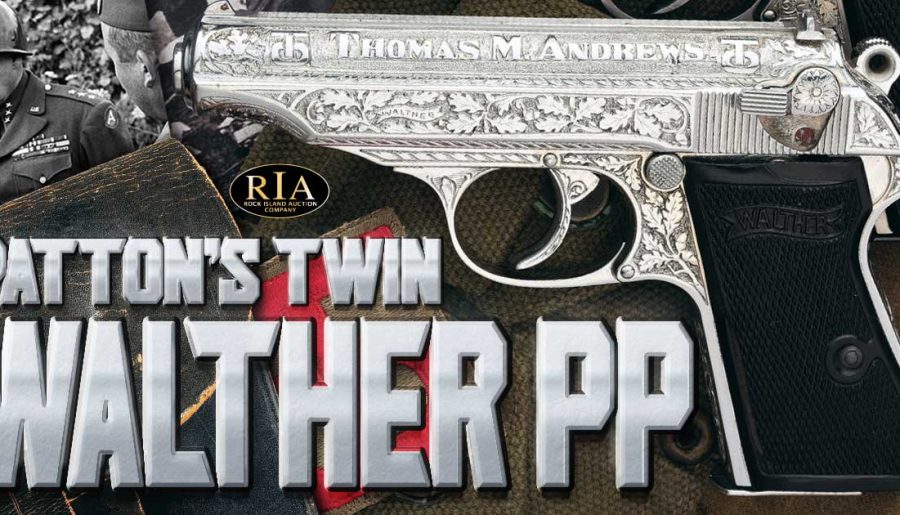 Produced in extremely limited numbers, the “Tough ‘Ombres” Walther PPs are some of the most sought-after German guns carried home by America’s GIs during WW2, and Rock Island Auction Company is offering one of the rarest of the rare this May – a Walther pistol that truly stands in a league of its own. 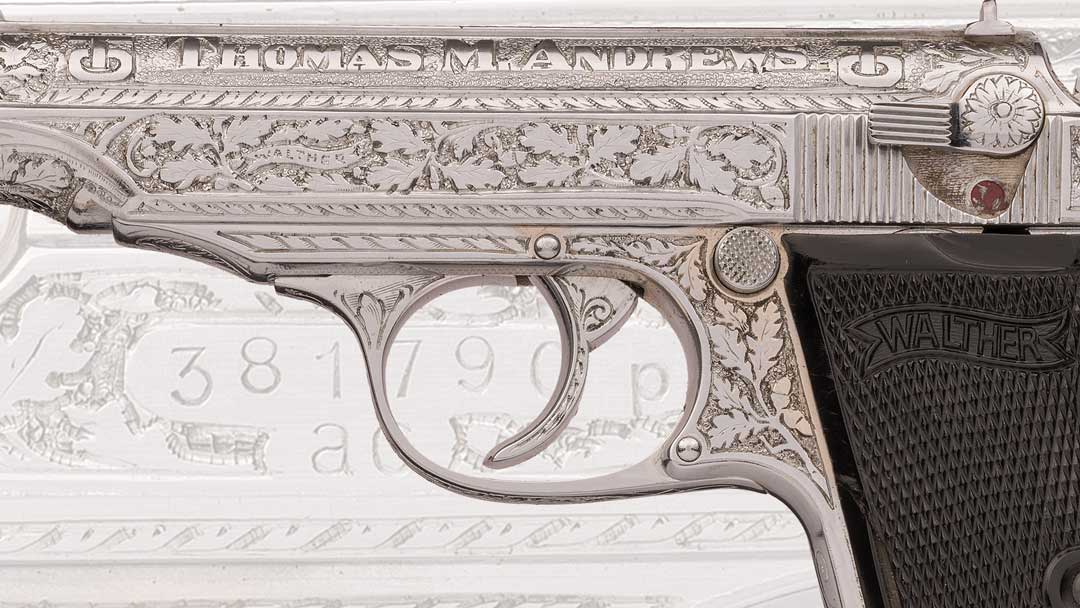 The upper left side of the slide bears the raised name “THOMAS M. ANDREWS” flanked by the 90th Infantry Division’s “TO” monograms, short for “Tough ‘Ombres”, a nickname proudly embraced by the army division.

As a near-identical twin to General George S. Patton’s presentation Walther and one serial number below the legendary general’s gun, the Walther PP of Lieutenant Colonel Thomas M. Andrews, Chief of Staff for Major General Herbert L. Earnest of the 90th Infantry Division, is a one gun wish-list gun for WW2 enthusiasts, Walther collectors, and firearms fans as a whole. 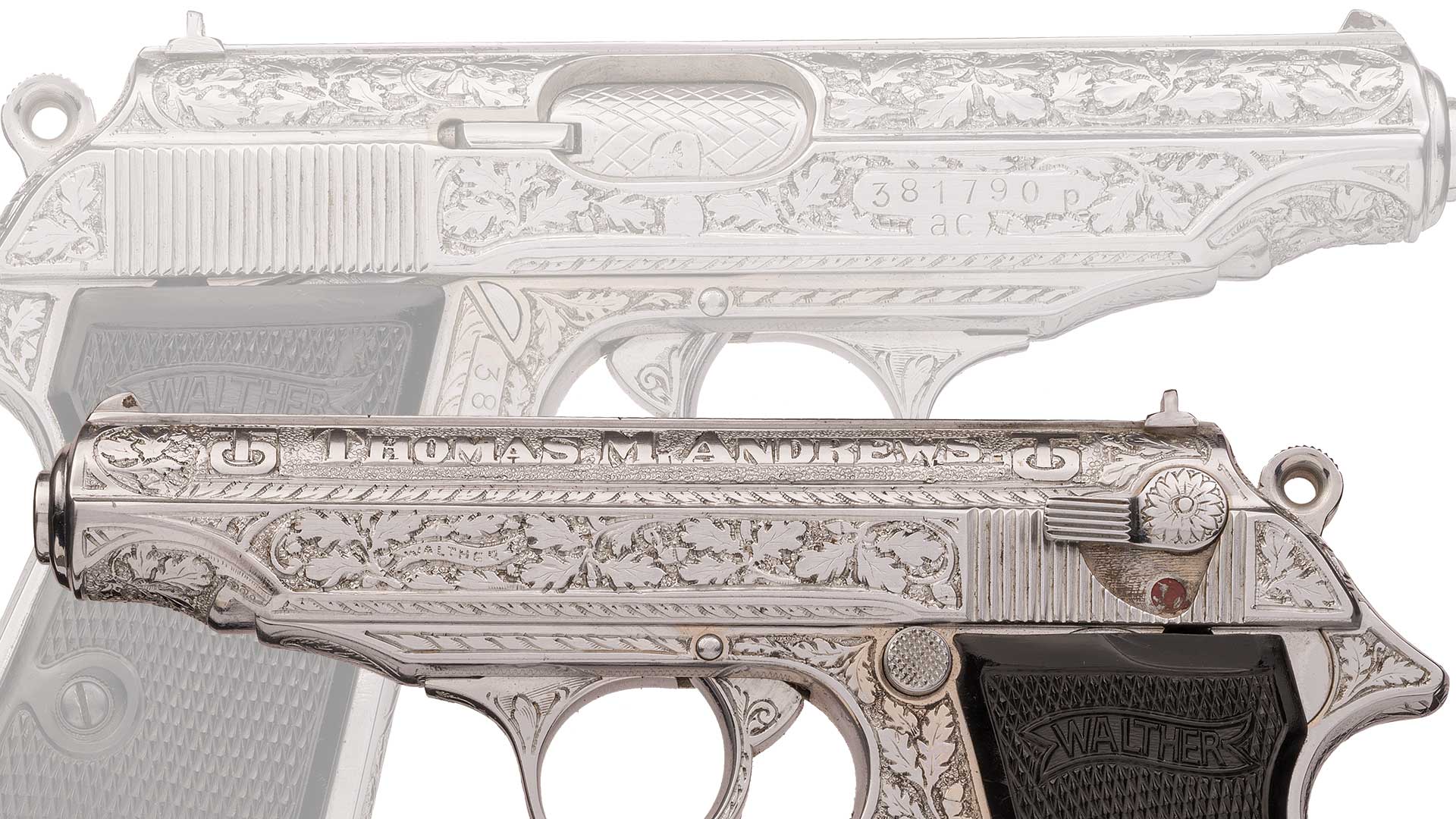 There are only three known examples in total of these types of engraved Walther PP presentation pistols with the late blank slide.

Andrews’ Walther is also one of only three known examples of this type of engraved Walther PP presentation pistol with a late blank slide. The late war Walther PP blank slide was found on Walther PPs made towards the end of WW2, when German gun manufacturers started cutting corners in manufacturing to speed up gun production as the war turned poorly for the Axis powers. The only known engraved Walther PP presentation pistols of the type with a late blank slide are General Pattons’, Colonel John C. Whitcomb’s (serial number 378447P), and the Walther engraved to Lieutenant Colonel Thomas M. Andrews. 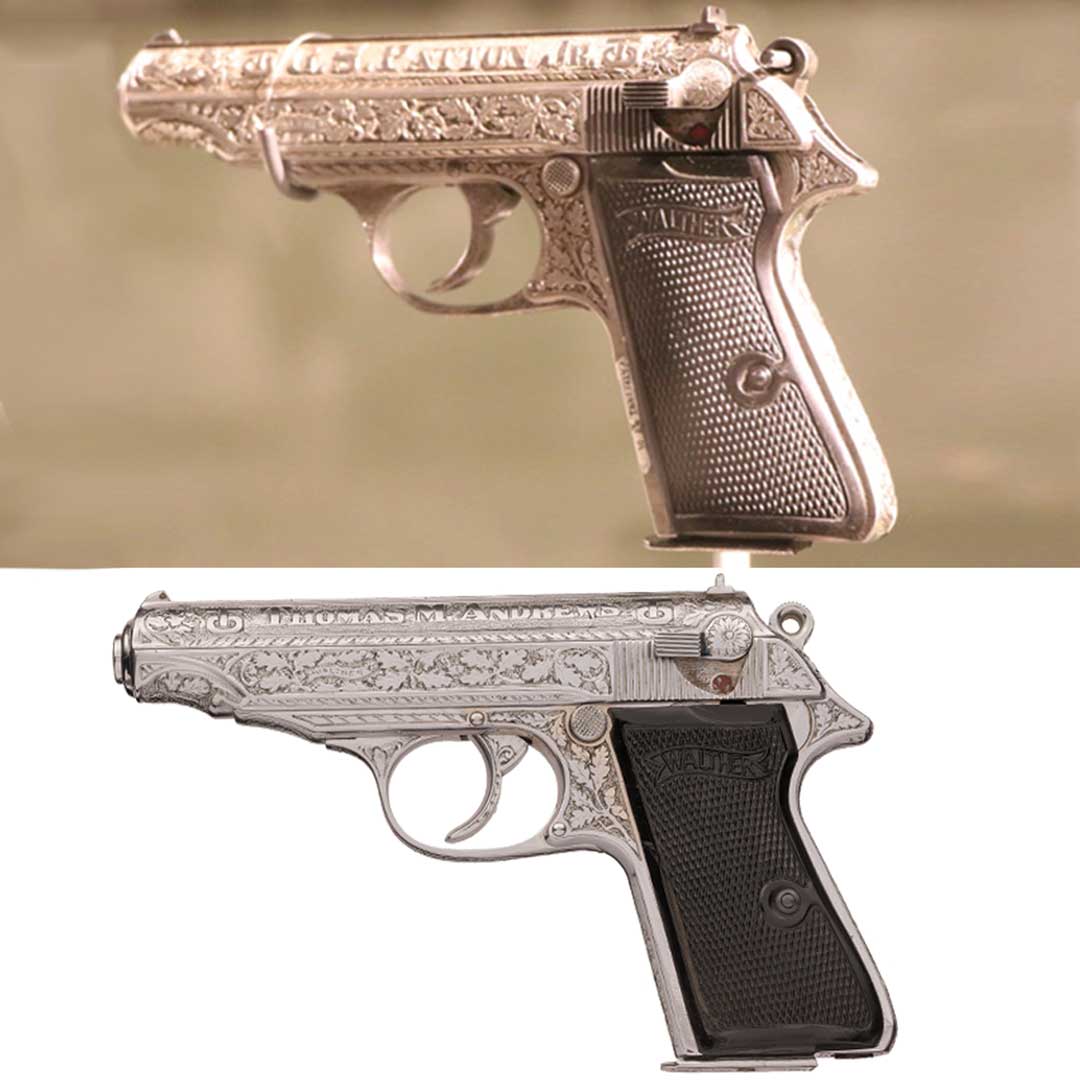 One of only three engraved Walther PP presentation pistols to use a late blank slide (bottom). The second was engraved for General Patton (right).

Much of the surface of Lieutenant Colonel Andrew’s Walther PP is covered in deep-cut oak leaf motifs with checkerboard accents, zig-zag and dot borders, and geometric accents on the trigger guard. Often left blank on late war military PPs, the left side of the slide has received a hand-cut “Walther” banner – all features identical to General Patton’s pistol.

Presentation Pistols for the Top Brass

The old adage “if a gun could talk” certainly applies to the truly fascinating and phenomenal Walther PP pistols engraved for members of the 90th Infantry Division. When General Patton’s 3rd Army captured the Walther factory in April of 1945, a number of pistols were assembled from the remaining engraved part sets, which had been produced by the Walther factory prior to and during the war, then set aside for future presentation to German officers. 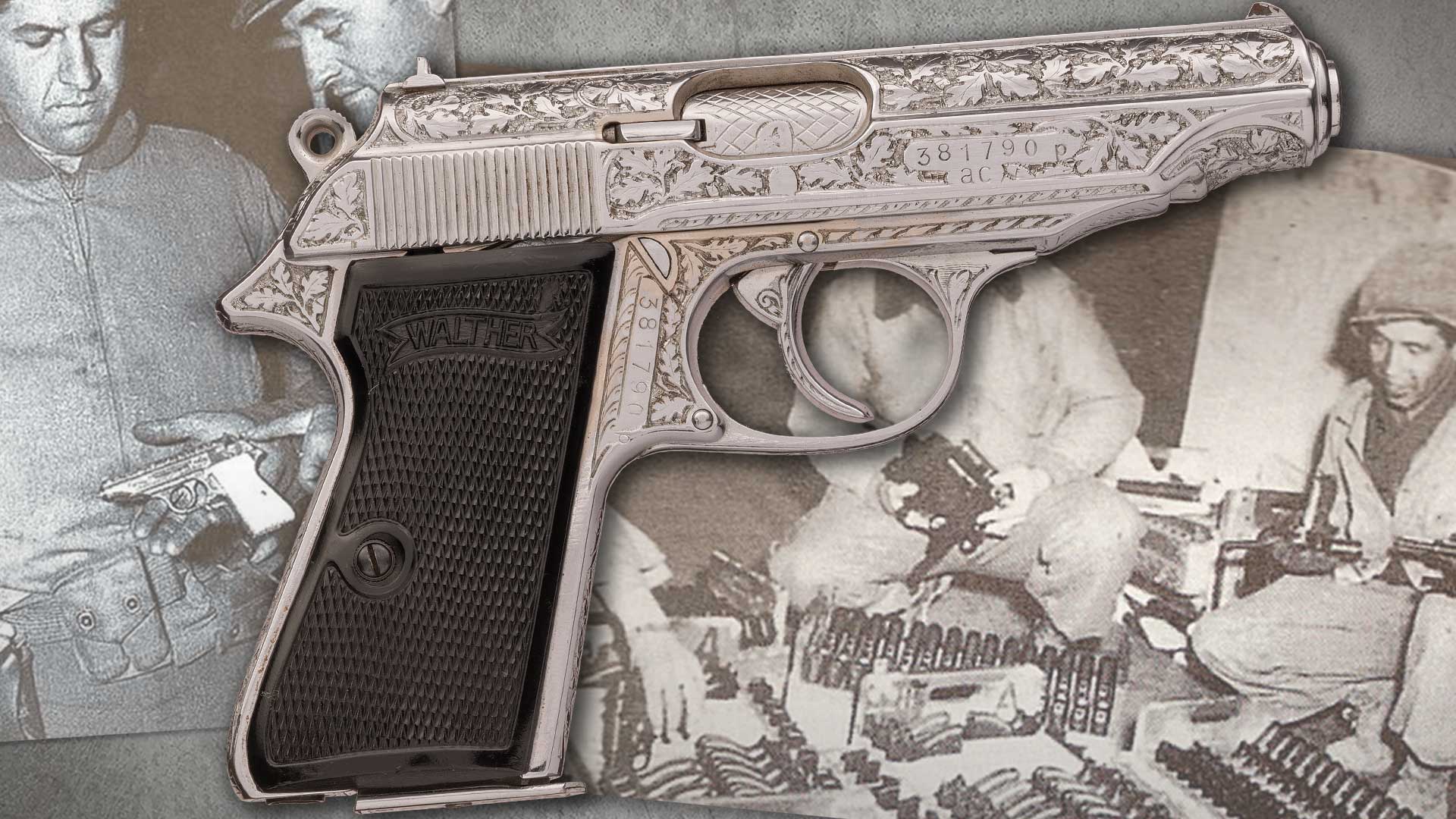 The “ac” code indicates that the gun’s parts were produced at the Walther factory in Zella-Mehlis near the end of WW2.

Thomas Andrews’ family states that he personally commissioned the Walther pistols that would be presented to General Patton and other top brass. The serial number and matching design of Lieutenant Colonel Andrews’ Walther PP seems to support that story, as does Andrews’ position as the G4 logistics officer during the occupation of Zella-Mehlis.

Though many senior members of the 90th Infantry Division and certain favored NCOs were presented with Walther PPs with the symbol of the Tough ‘Ombres engraved on either side, the stunning pistol Andrews was able to secure for himself stands out from the rest. With the same accents, motifs, borders, grip, and a comparatively rare hand-cut “Walther” banner on the left of the slide, it’s visually a near twin to General Patton’s presentation Walther, but the pistol’s late blank slide, found on only two other engraved Walthers in this style, truly places Lieutenant Colonel Andrews’ pistol in the same rare category as the famous general’s.

One of the Tough ‘Ombres

Thomas M. Andrews was a 1934 graduate of the University of Chicago and a family man prior to being called to service in 1942. Major Andrews trained as a field artillery officer and joined the U.S. Army’s 90th Infantry Division as a motor officer with the Service Battery of the 345th Field Artillery Battalion. 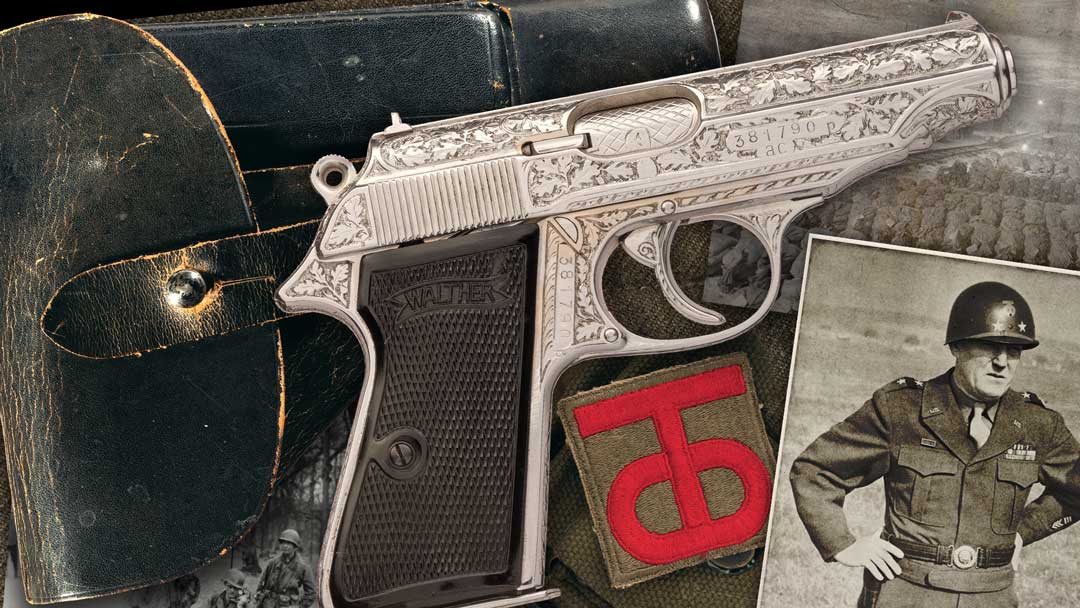 Andrews became Chief of Staff for General Herbert L. Earnest, famous for his discovery of the German gold reserves hidden within the Merkers Salt Mine.

One of the heavy hitters of Patton’s 3rd Army, the 90th Infantry Division was at the forefront as the Allies pressed across France and into Germany in early 1945. Andrews was promoted to Lieutenant Colonel in October of 1944 and became Chief of Staff for General Herbert L. Earnest. A few months later, General Earnest led the 90th Infantry Division on a 47-day push into the heart of Germany and seized a cache of more than 100 tons in German gold bullion and millions in foreign currencies, as well as a healthy supply of cognac, champagne, priceless antiques, and countless other treasures from the crumbling Third Reich.

In early April, as the Western Allies drove deeper into Germany, the 90th Infantry Division was one of the first to reach Zella-Mehlis, home of the Walther Arms weapons factory. Fritz Walther and the mayor of Zella-Mehlis defied Hitler’s orders to fight to the last man and instead formally surrendered the town to American forces. 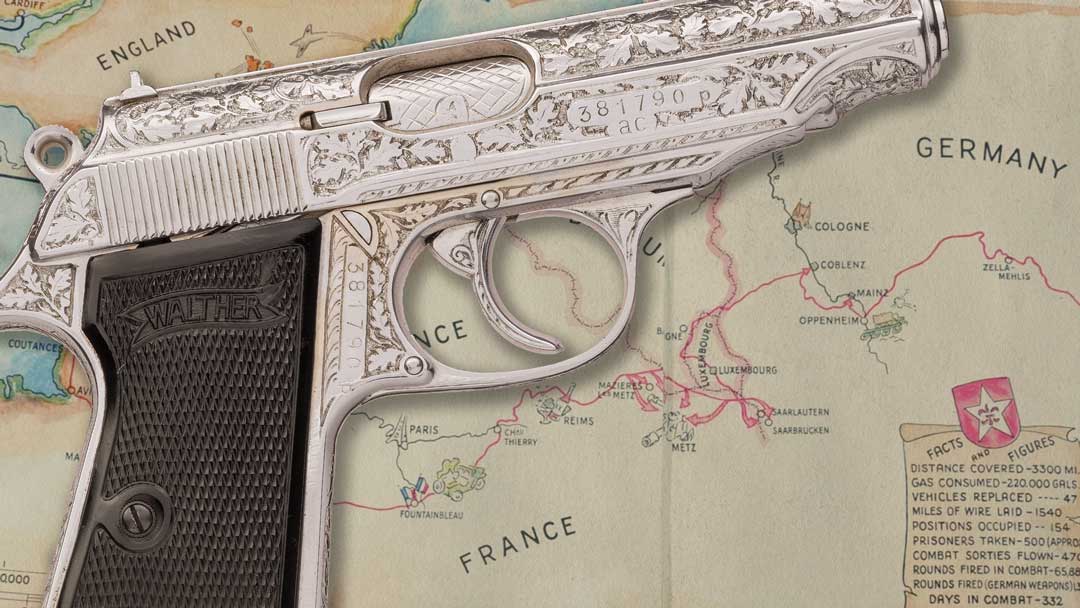 Securing the Walther plant was a fruitful effort for the U.S. Army and their joint mission with the British to retrieve any and all German weapon research before it could be destroyed by retreating Nazi forces or fall into Soviet hands. While Fritz Walther and his brothers were placed under house arrest, the 90th Infantry Division thoroughly explored the fabled weapons factory. 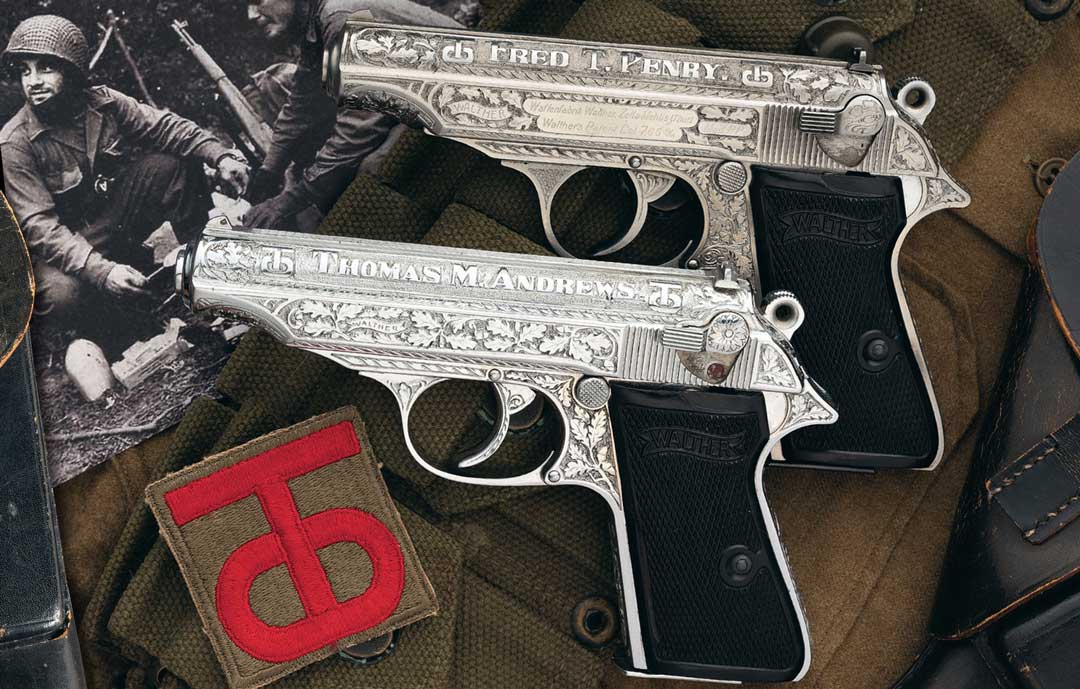 Accounts concerning the occupation of Zella-Mehlis vary, though all agree that the 90th took the sprawling Walther Arms facility without a fight. Soldiers who were souvenir hunting also had widely different experiences. Many were ordered not to take war trophies, while other officers were more lenient or chose to look the other way as the grounds were searched and inventory was conducted. These factory-captured Walthers are sometimes called cigarette pistols, as soldiers would offer packs of cigarettes to the factory workers still on-site in exchange for having a Walther pistol assembled from the remaining parts.

“At Zella Mehlis, we found the Walther pistol factory, much to our delight. Later, much to our disappointment, our “captured” pistols were ordered returned to the factory.”

The men of the 90th were able to get a number of half-finished presentation-grade Walther pistols fitted out to their specification. Though some similarities are apparent in many of Zella-Mehlis factory captured pistols, like the Eagle/N stamp proofs and the black checkered plastic grips with Walther banners, a number of interesting variations exist due to the mixed inventory on hand in Walther’s engraving room and factory production line. 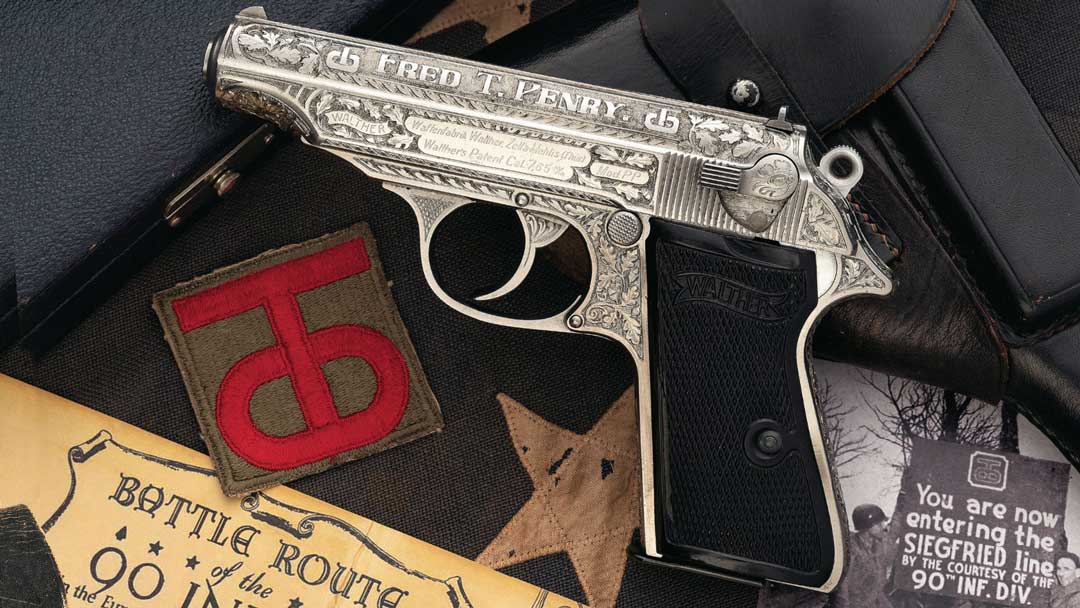 Another common element to factory captured Walthers is the “ac” code on the left side of the slide. During WW2, the Germans assigned letter codes to munitions manufacturers to keep the Allies guessing as to their place of origin, such as designating Mauser “byf” and Spreewerk “cyq.” The German “ac” designation is found on most late war era military contract P.38s, PP, and PPK pistols.

The pistol Andrews acquired was one of many presentation-to-be PPs on hand, and would have been more or less ready to receive the name and insignia. As a staff officer and logistics specialist with the 90th Infantry Division, Lieutenant Colonel Andrews would have been ideally placed to receive one of these elite Walther pistols.

In July of 1945, Andrews was released back to the States on points. After a few years working on Santa Catalina Island for the Wrigley Family, Andrews returned to Illinois and settled down as the owner of Algonquin Hardware Store. He retired from the Army Reserves as a colonel. 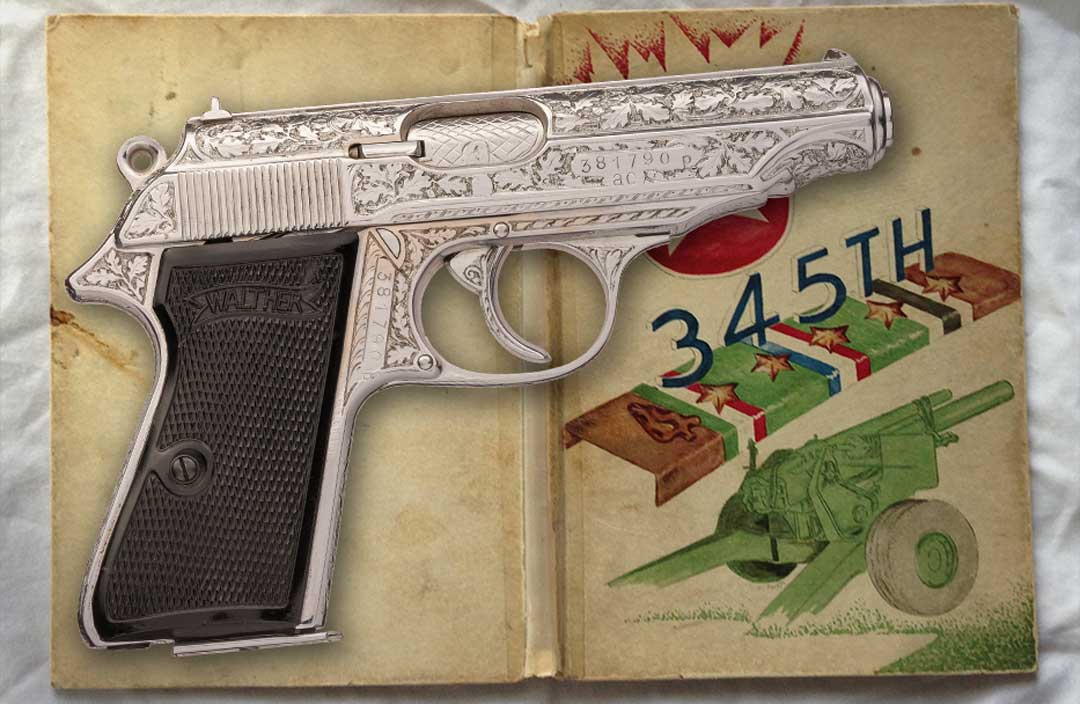 Thomas Andrews carried his commitment to service into civilian life, serving his community as president of the Algonquin Lions Club, president of the Algonquin Business Association, and commander of American Legion Post 670 (now part of Post 1231 in Lake in the Hills, Illinois). Andrews passed away on December 6th, 1996, one day before the 55th anniversary of Pearl Harbor, the event that roused the Greatest Generation to answer their nation’s call.

Factory captured Walthers are exceptional guns, and even more so were the exceptional men of the 90th Infantry Division who carried these pistols in the final months of WW2. For some, the captured Walthers served as mementos. For others, they were a small reward for what they’d endured in the fight to liberate Europe, when the world asked ordinary men to do extraordinary things. 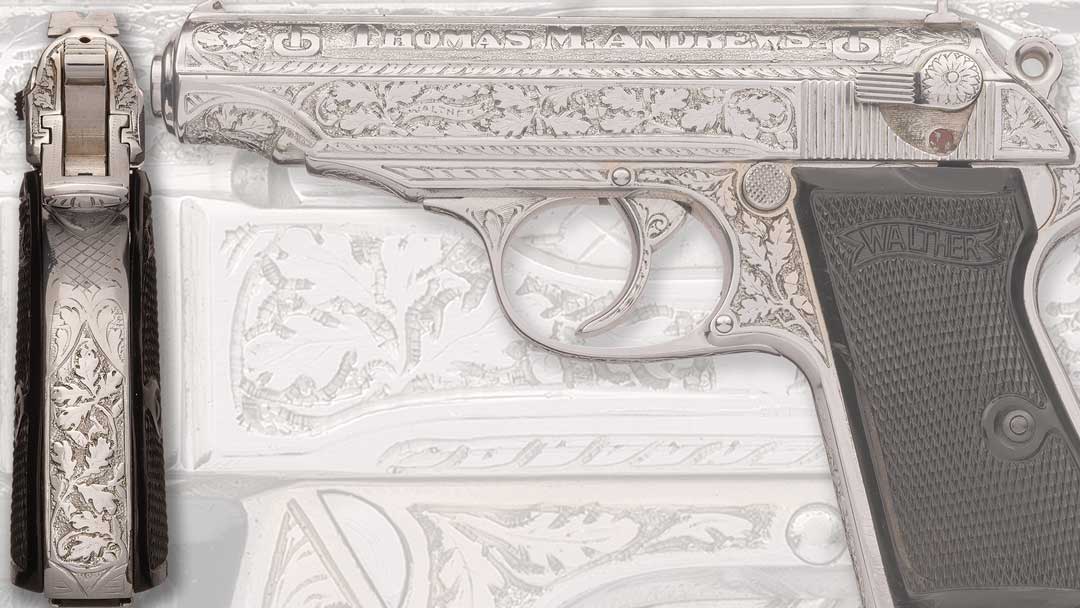 The Walther PP pistol engraved to Thomas M. Andrews that’s featured in Rock Island Auction Company’s May 13-15 Premier Firearms Auction is a phenomenal standout as a near twin to General George S. Patton’s Walther, only one serial number down from his, and one of only three known engraved Walther PP presentation pistol of this type with a late WW2 blank slide. In an auction filled with the finest firearms, this little pistol stands out as one of May’s hidden treasures. 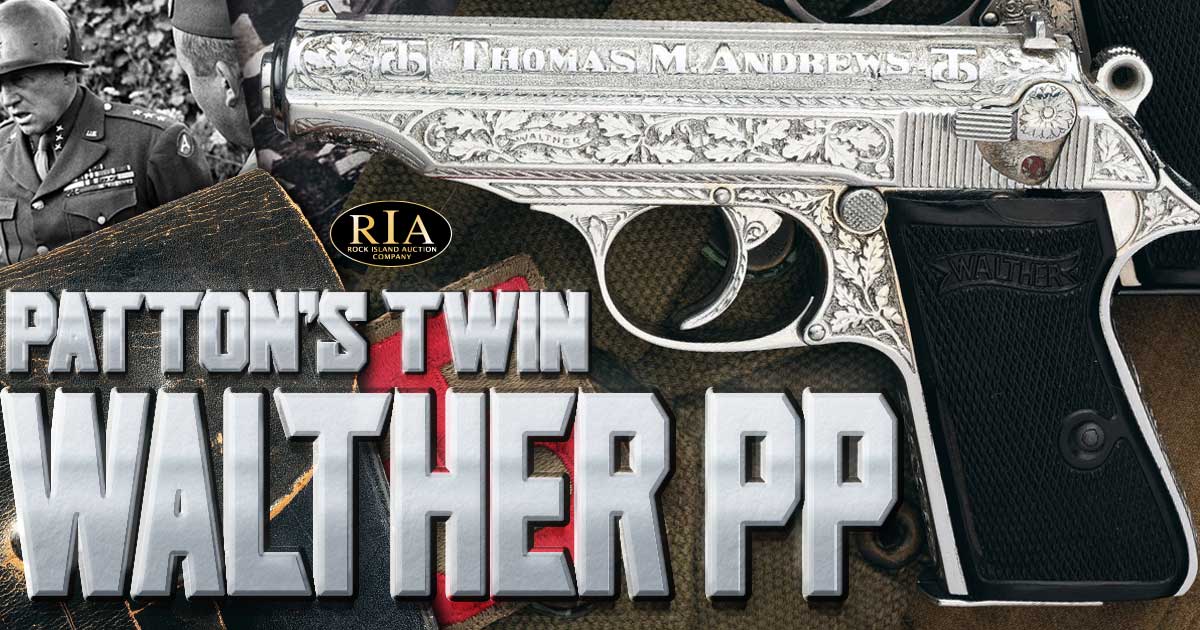