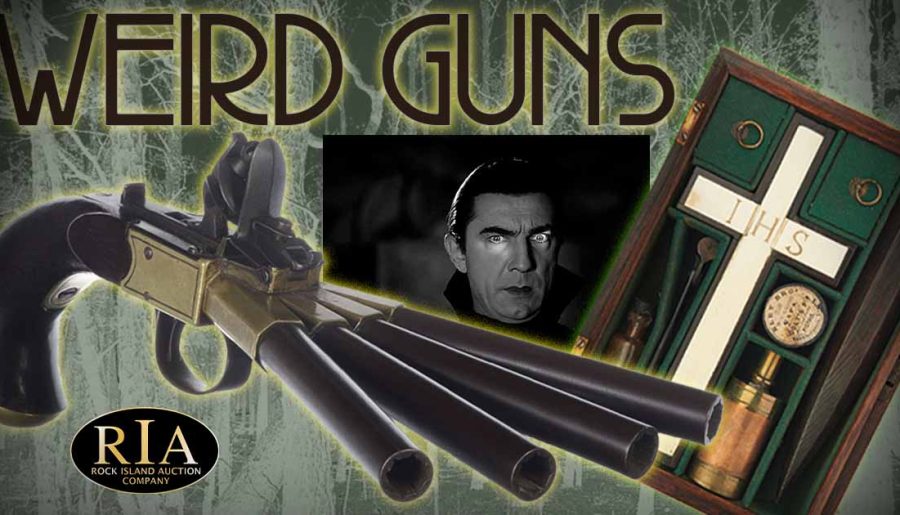 You don’t see Han Solo’s blaster every day, but it was sold this year at Rock Island Auction. The same goes for an amazing pair of Remington revolvers owned by Ulysses S. Grant, or last year’s sale of John Wayne’s revolver and Alexander Hamilton’s pistols.

You also don’t run across an autographed photo of John Philip Sousa, a vampire killing kit, nor a jailer’s percussion pistol, but all three items and other weird weapons like a duckfoot pistol, a percussion knife pistol, and Roakuoh-Sha Type 89 aerial gunnery trainer are among the curiosa in Rock Island Auction Company’s Oct. 4-7 Sporting and Collector Auction. 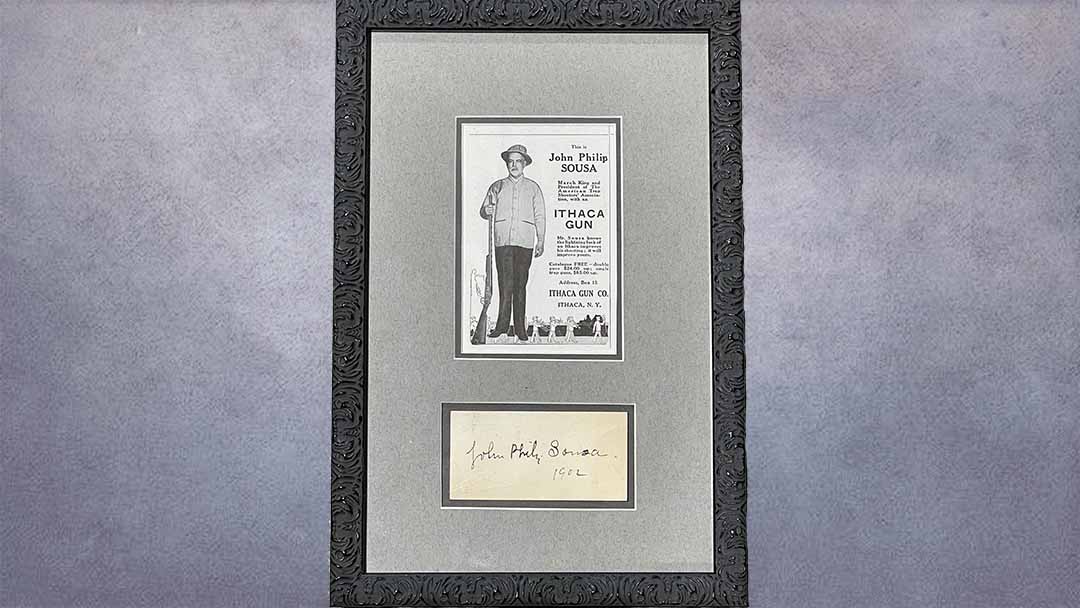 An autograph of John Philip Sousa is Lot 4893 in the Oct. 4-7 Sporting and Collector Auction.

An autographed photo of George Armstrong Custer (sold in the August 2022 Premier Auction) might seem more in tune with the world’s foremost firearms auction house than the composer of some of the greatest American marches, but delve into Sousa’s history a bit and things become clear.

Sousa was a devoted trap shooting enthusiast who registered 35,000 targets in his career and is enshrined in the American Trapshooting Association Hall of Fame.

“Let me say that just about the sweetest music to me is when I call `pull,’ the old gun barks, and the referee in perfect key announces, `dead’,” Sousa is quoted as saying. 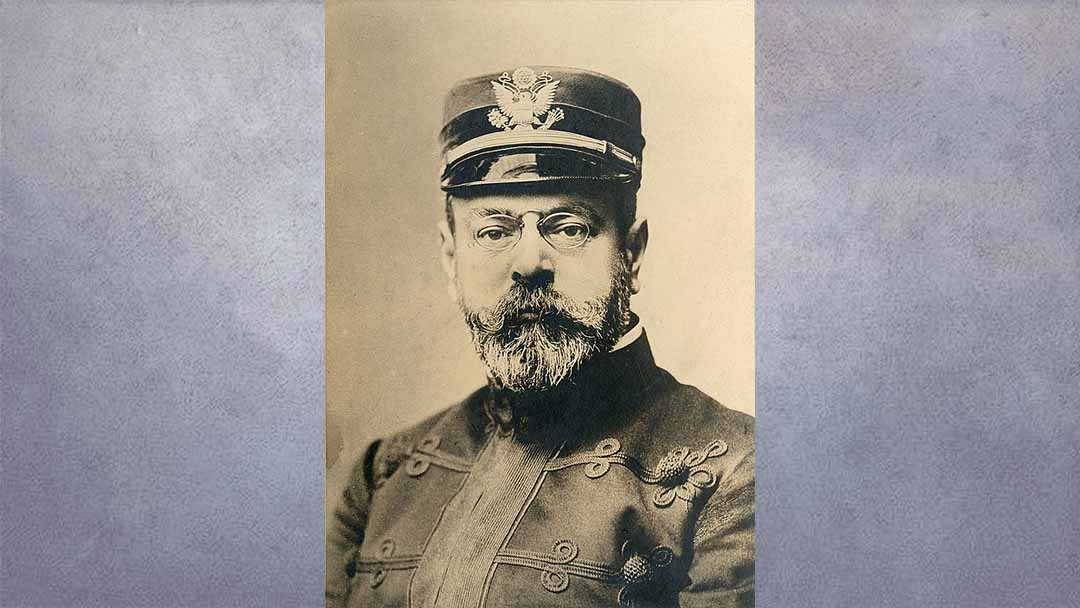 John Philip Sousa composed 137 marches, earning him the knickname “the March King.” Lot 4893 has several Ithaca Shotgun advertisements, including one that has Sousa’s autograph on it.

He organized the first national trapshooting organization, the Amateur Trapshooting Association, served as the chairman of the National Association of Shotgun Owners in 1917, and wrote several articles about trap shooting.

Sousa raised up the U.S. Marine Corps Band to new heights, leading it from 1880 to 1892 before striking out on his own with a civilian band. He composed 137 marches, including “Stars and Stripes Forever,” declared the National March in 1987. He died in 1932.

A brilliant musician and composer, Sousa truly loved trap shooting. In his entry into the American Trapshooting Hall of Fame, it reads:  “When asked by a reporter in Chicago while attending a Grand American Handicap what he considered life’s best gifts, he replied with the title of one of his articles that had appeared in the American Shooter: `A Horse, A Dog, A Gun, and a Girl— with Music on the Side.’”

The autograph accompanies an advertisement of Sousa holding an Ithaca shotgun. The ad copy reads: “This is John Philip Sousa March King and President of the American Trap Shooters’ Association, with an Ithaca Gun.

“Mr. Sousa knows the lightning lock of an Ithaca improves his shooting; it will improve yours.” The ad includes an address for a free catalog with a line drawing of a marching band.

It looks like a gun — if you watch old Buck Rodgers or Flash Gordon serials, but really it’s a camera used for training Japanese airplane gunners in World War II. The Roakuah-Sha (or Rokuoh-Sha) Type 89 was made by Konishoruko — that later became Konica — and mounted in airplanes to train gunners. 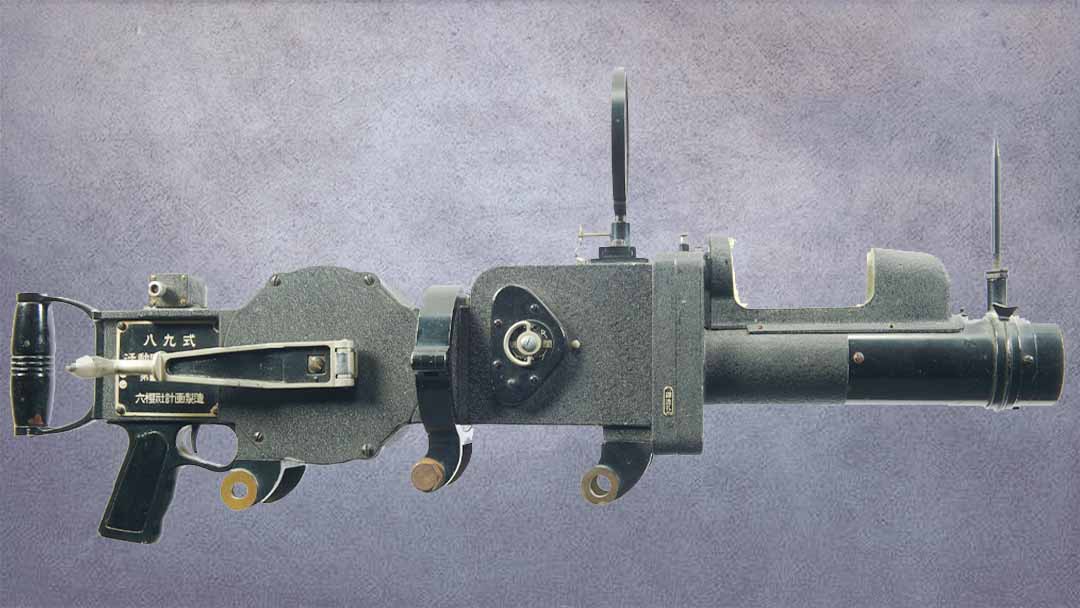 Lot 4579 is a Japanese Roakuah-Sha Type 89 Aerial Gunnery trainer that was a camera that allowed trainers to review the film of trainees firing to point out their failings. It could be mounted inside a plane or on a wing.

When the trigger was pulled, the camera began taking 18x24mm photos, showing where the “gun” was firing. Reviewing the film gave trainers the opportunity to point out failings on where to aim and lead time to improve accuracy. An optical stopwatch went into the yellow tube atop the mechanism and was recorded onto the film via a prism.

The gun/camera could be mounted inside or outside of an airplane. Mounted inside, it was controlled by the gunner, but when mounted outside it was controlled remotely by cables. Offered as Lot 4579, the Roakuah-Sha Type 89 is matte black and includes a ring mount, six film canisters, cord, and an extra set of detachable sights. A similar version is part of the Smithsonian Institution’s National Air and Space Museum collection.

A jailer has to be ready for trouble, so for a time, they carried keys that also served as guns. They were often fairly primitive, requiring a cigarette or cigar be touched to the flashpoint in order to fire them. That didn’t make them very practical in times of trouble or discord with prisoners.

Used between the 17th and 19th centuries, these key/gun hybrids were often made by lock makers and had flintlock or percussion firing mechanisms. They were also offered to armories and banks. Lot 2261 has a 2 1/2 inch barrel with a bronze finish offering firepower that easily hid in plain sight. 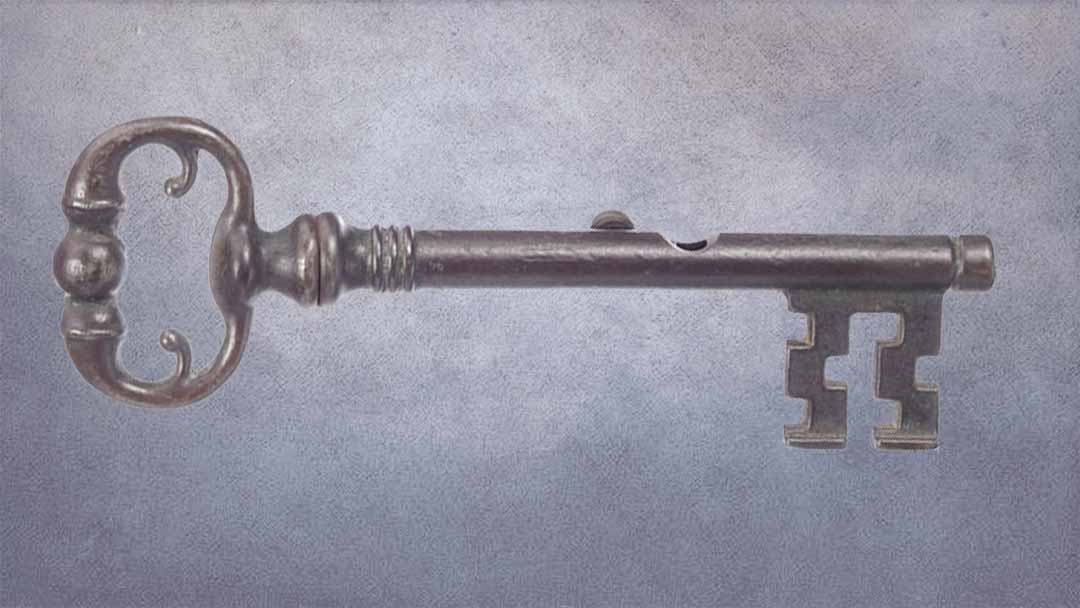 Lot 2261: This jailer key pistol could be filled with gunpowder and a cigarette or cigar touched to the flashpoint to fire it. These type of guns while also serving as keys could have flintlocks attached to them, too.

John Blissett was a gunmaker and jeweler in London in the 19th Century with patents for an air gun walking stick and loading lever for a revolver to his name. As a gun maker, with a royal appointment to the Duke of Sussex, it only makes sense that he’d make a knife pistol since they enjoyed some popularity in mid-Victorian England before breech-loading guns or Samuel Colt’s revolvers that offered a higher rate of fire came into vogue. 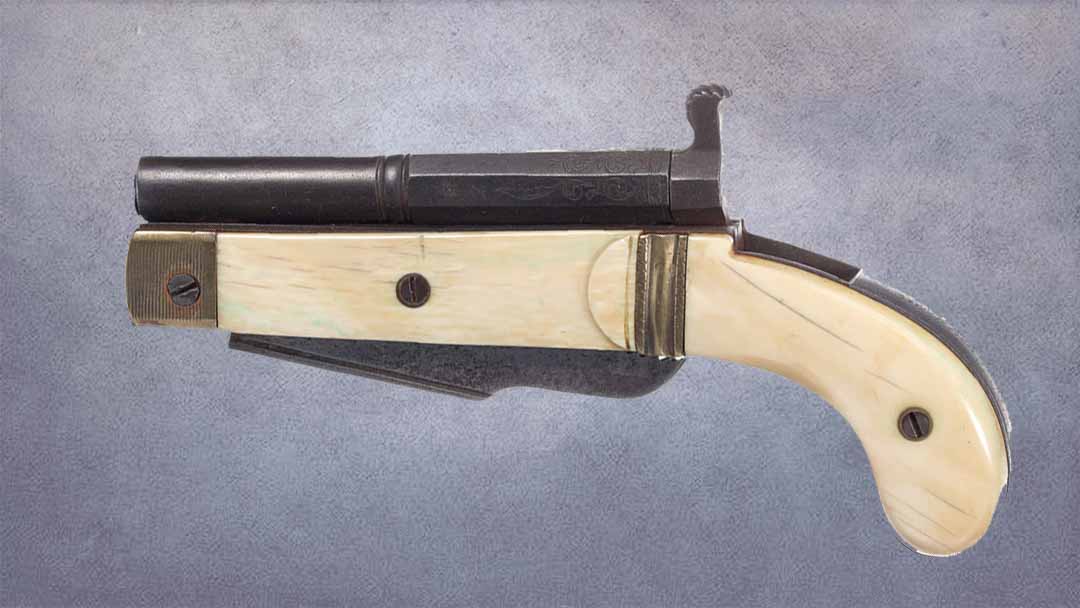 The United States Navy developed a .54 caliber single shot smooth bore pistol with an 11 1/2 inch bowie knife blade in 1938, well after such weapons peaked in popularity. The Navy had modeled it after an Elgin “cutlass pistol,” that was patented in 1837 by George Elgin. Lot 2260 doesn’t offer Bowie knife-like length, but has a blade matching the 4-inch long gun barrel.

Hybrid weapons made sense before repeating firearms came into popularity. The Sporting and Collector Auction also offers a French boarding axe/flintlock pistol as Lot 199. Sweden and Germany employed these with their navies.

Before repeating firearms, the only way to increase the rate of fire was to add barrels to your gun that fired singularly or all at once. The more barrels, the more the gun weighed, so that was an important consideration.

Consider this, a four-barrel gun with its barrels splayed out in the form of a duck’s foot — hence the name. A single gun, with one shot might not hit its target, but with a four-barrel duckfoot gun, the chances of hitting a target are four times greater. A volley gun, the duckfoot was best for use in a crowd or in a confined space where it would achieve its greatest effect.

The widest barrels tend to be at about a 60 degrees angle. To make it work, the breech plate was broadened. The barrels would be detached for loading the ball, gun powder and wadding. Powder would go into a central pan and then the gun was shaken to distribute the powder toward each barrel’s chamber so that when fired, the sparks would ignite the powder and send flame down each cylinder to fire the ball. 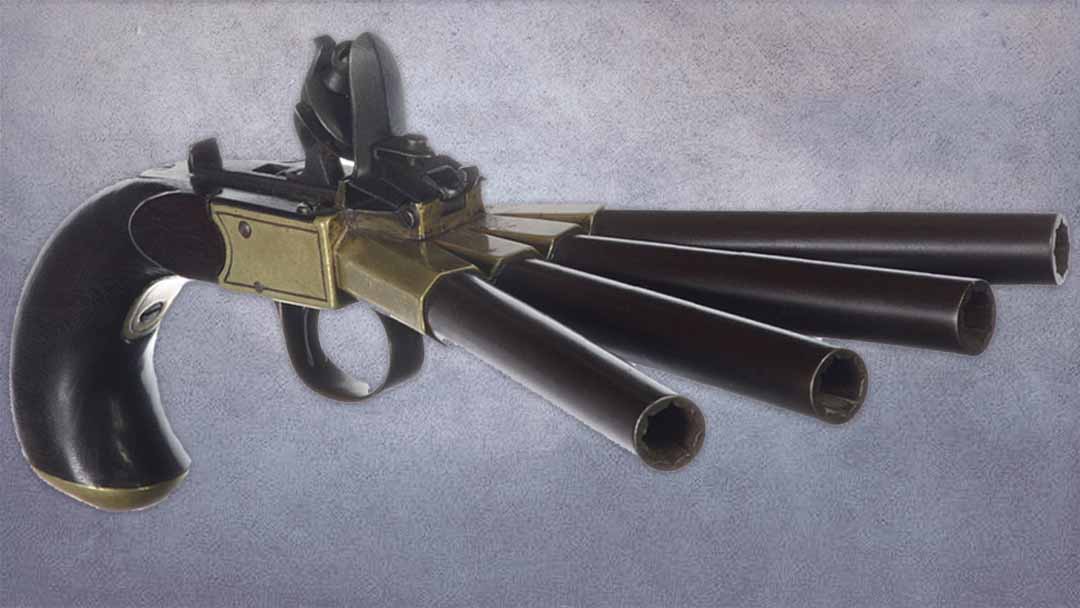 Lot 6189 is a four-barrel duckfoot pistol that served as a volley gun against mobs.

A prototype doesn’t make something weird, but it does make it unique. LeMat revolvers, designed by Jean Alexandre LeMat, had a nine-chamber cylinder like this carbine. As muskets were waning and repeaters were on the horizon, revolving long guns were finding their way to market, like the Patent Arms Manufacturing Company “Paterson” First Model Ring Lever revolving rifle, and the Colt New Model revolving rifle.

LeMat revolvers were used by a number of Confederate generals, and approximately 200 of their revolving carbines of various calibers were made for the Confederate army and given serial numbers. The Confederate government eventually rejected the LeMat carbines because of the price. 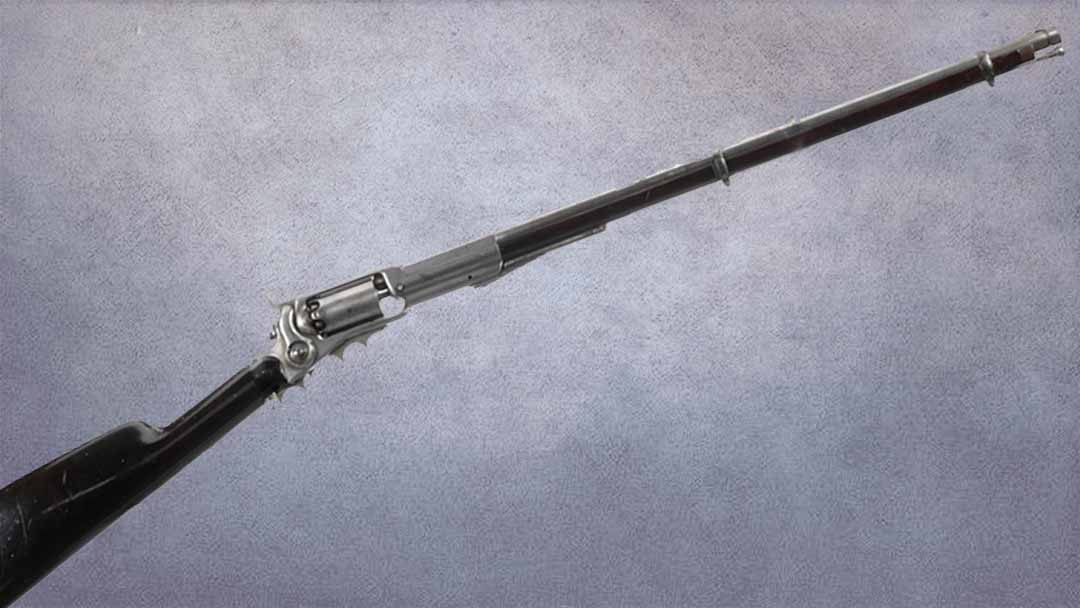 Based off the LeMat revolver, this unmarked carbine, Lot 2182, could hold nine shots in its cylinder.

This prototype, Lot 2182, has a .52 caliber rifled upper barrel and a .38 caliber lower barrel compared to the carbines produced for the confederacy that were chambered in .44 caliber for the nine-shot cylinder and 20-gauge for the lower barrel.  It is unmarked and a possibly one-of-a-kind weapon.

Vampires, real, right? A kit for killing vampires featuring a percussion pistol might be about as weird as it gets, especially when you start looking at their contents — a crucifix, silver bullets, a wooden stake, brimstone, garlic powder, and holy water, all housed in a wooden box. 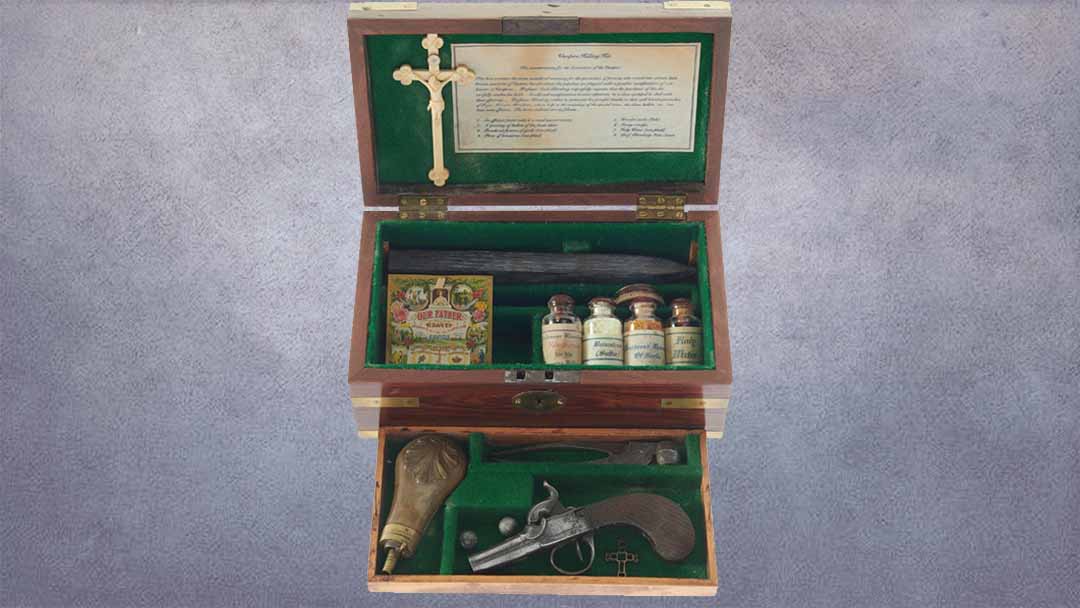 Vampire Killing Kits like Lot 2269 include an “efficient pistol with its usual accoutrements.”

Supposedly, these kits, created by Ernst Blomberg were acquired by people headed to Eastern Europe in the mid-1800s, and “Ripley’s Believe It or Not,” that claims to have the largest collection of Vampire Killing Kits, promotes that idea. The kits follow a consistent list of tools, with “an efficient pistol with its usual accoutrements” always at the top of the list. A label states that “Professor Blomberg wishes to announce his grateful thanks to that well known gunmaker of Liege, Nicholas Plomdeur whose help in the compiling of this special items, the silver bullets etc., has been most efficient.” 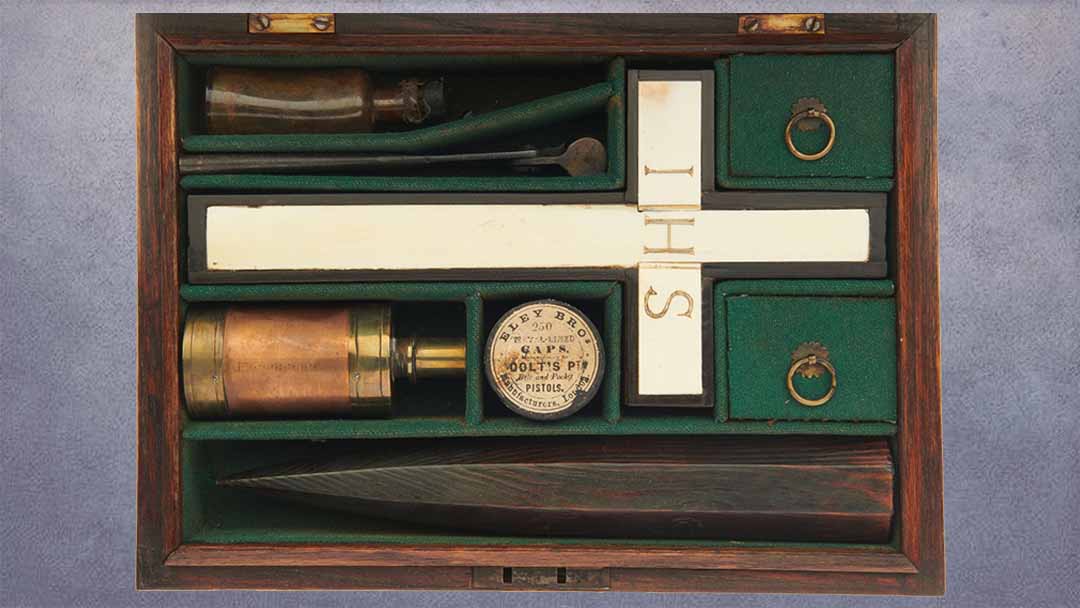 The “efficient pistol in the Vampire Killing Kit of Lot 4235 is a cross-shaped underhammer pistol.

These kits, Lots 2269 and 4235, were assembled in the 20th century using a mix of original, antique, modified and modern components. They became popular likely following the rise of England’s Hammer Studios. Its gothic horror films of the 1950s featured actors like Peter Cushing, who played Victor Frankenstein six times, and Christopher Lee who portrayed Count Dracula seven times.

A variation of the vampire killing kit is Professor Blomberg’s Assassin Kit, Lot 2262, that includes a small dagger, a blowpipe, one poison dart, a vial of Professor Blomberg’s five-second paralyzing serum, and vials of arsenic, belladonna, and hemlock though the true contents of the vials are unknown. 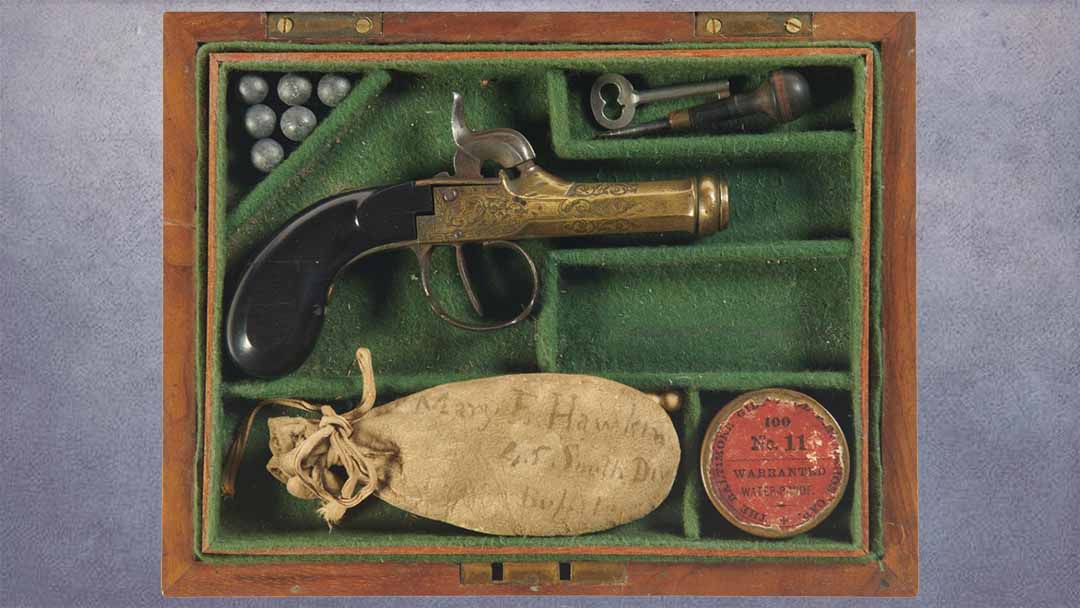 Professor Blomberg’s Assassin Kit in Lot 2262 is a variation on the Vampire Killing Kits.

The assassin kit is for use against “anarchists, traitors, and anti-religious zealots.”

One Vampire Killing Kit on offer, Lot 200, is slightly different, offering a Lebeda Engineering LLC percussion ring gun, and a cane tipped with iron and a hand grasp that serves as the case for four glass vials, a copper cross, and two “silver bullets.” 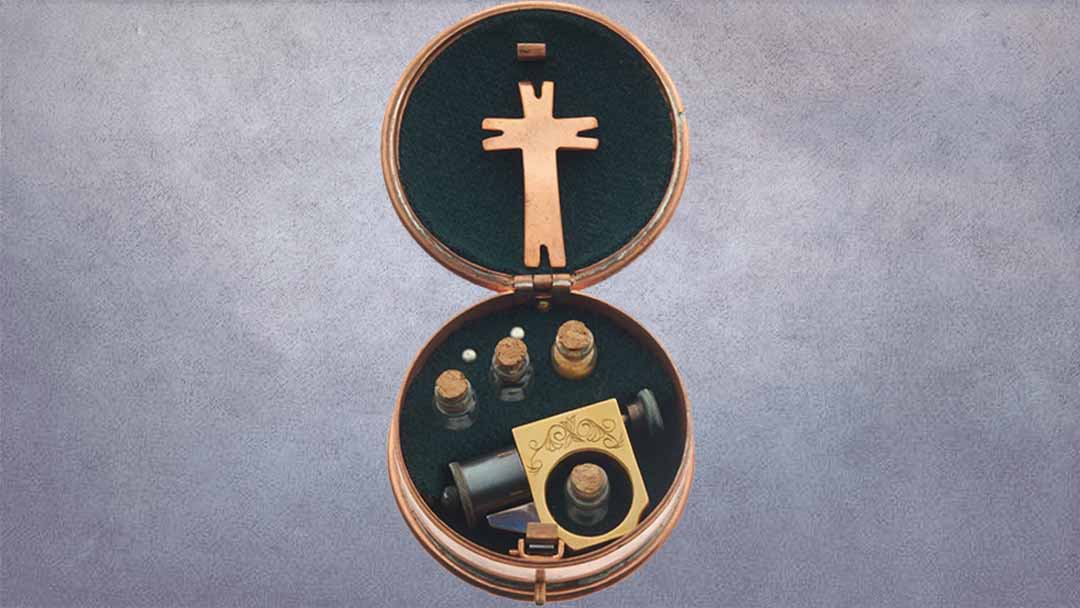 Lot 200 is a slightly different Vampire Killing Kit that features a percussion ring gun encased in the hand grasp of a cane that can be used against vampires.

Whether you believe in vampires, preferring the caped kind, sparkly ones, or those that look like surly teenagers a la “The Lost Boys,” these kits are for you.

Peculiar. Unique. Awe-inspring. Exclusive. Magical. A “March King” autograph, a Japanese gunnery training camera, a duckfoot pistol, or a kit for killing vampires, all are interesting and valuable collectables no matter how you label them. Visitors, collectors, and bidders will find something that will speak to them, whether it was a lot featured here or a Colt Single Action Army or a Winchester Model 1873 in Rock Island Auction Company’s Oct. 4-7 Sporting and Collector Auction.

How the Bizarre Duck’s Foot Pistol Came into Being, by Bill Harriman, Shooting UK 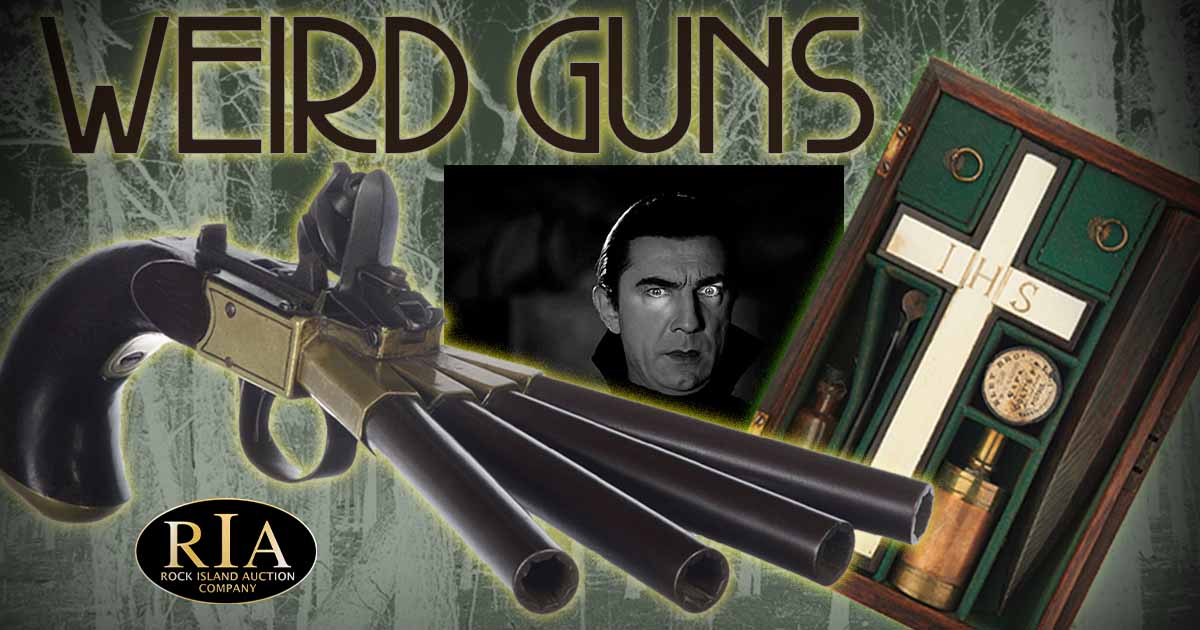