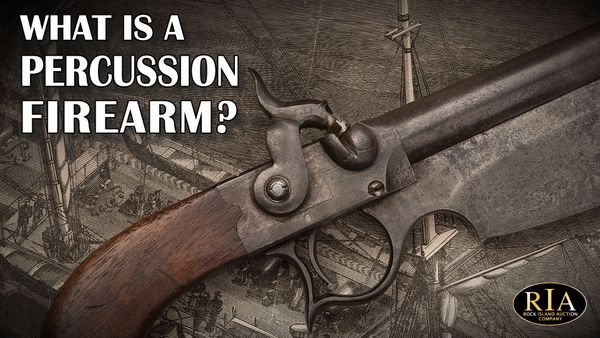 How Does a Caplock Work?

A standard percussion sidelock uses the same interior components as a flintlock, but the overall use of the lock is simpler. After loading the main powder charge and projectile(s), the hammer is pulled back to the half-cock position and a percussion cap is fitted on the nipple. The gun is now fully loaded.

Pulling back on the hammer further brings it to full-cock, making the gun ready to fire. When the trigger is pulled it applies pressure on the sear which then disengages from the tumbler allowing the hammer to strike forward smashing into the percussion cap, which has been previously placed on the nipple. The concussion between the nipple and hammer causes the priming material in the percussion cap to explode, sending a flash through the hole in the nipple into the barrel where it ignites the primary powder charge which propels the projectile(s) out the barrel.

In a previous blog, ‘What is a Flintlock Firearm,’ we discussed that before the invention of percussion ignition firearms had utilized a charge of gunpowder in a pan to ignite the main charge of powder. This “priming charge” was susceptible to moisture which could cause it to fail to ignite. Failure to get a flash could also occur due to other failures such as a dull or misaligned flint in a flintlock or an extinguished slowmatch in a matchlock.

The priming charge used by matchlocks (top) and flintlocks (bottom) could sometimes fail to ignite.

Other times, the priming charge could ignite but might fail to ignite the main charge (a “flash in the pan”) or fail to do so quickly (a “hang fire”). Percussion ignition significantly counteracts these issues, though misfires and hangfires are certainly not uncommon. The mechanics of the mechanism also means the main powder charge was less susceptible to moisture.

Various percussion ignition systems were developed in the early 1800s after the discovery of shock sensitive fulminates. Most of the advancements were developed in the United Kingdom. Reverend Alexander John Forsyth is generally given the most credit for the development of percussion ignition systems thanks to his 1807 patented “scent bottle” system.

Other systems such as the patchlock, the pilllock, and the tubelock were developed, but they never became widely adopted and quickly fell from use with the introduction of the percussion cap in the early 1820s. It is the percussion cap that led to the widespread adoption of percussion ignition. Exactly who deserves credit for its invention is a matter of debate with multiple men working on similar designs prior to 1820.

Initially, percussion firearms were generally privately owned, and many were converted from flintlock. The American military as well as those of Europe continued to primarily use flintlocks through the 1840s. The U.S. government introduced the first percussion martial arm, the highly advanced breech loading Model 1833 Hall manufactured by Simeon North, around 1834, but the main weapons of the U.S. military remained flintlocks until the adoption of the Model 1841 “Mississippi Rifle” and Model 1842 Musket in the early 1840s. In the 1840s and 1850s, thousands of earlier flintlock muskets and rifles were also altered by the government from flintlock to percussion using various methods.

One of the simplest methods was removing the pan, frizzen, and frizzen spring; installing a percussion hammer in place of the cock, screwing in a drum bolster into the vent, and installing a nipple in the bolster. During the Civil War, these converted firearms alongside newer percussion muzzle loading rifle-muskets, manufactured both in the U.S. and in Europe, were the primary weapons used by the soldiers on both sides.

The internal components of a flintlock vs a standard caplock.

Percussion caps also made multi-shot firearms more reliable and led to the introduction of percussion pepperboxes and revolvers by the 1830s, most famously those designed by Samuel Colt. There were also attempts to improve the percussion system by creating automatic priming mechanisms such as the Maynard tape primer that functioned similar to the tape used in children’s toy cap guns, but the percussion cap remained the most common and widespread.

In addition to the standard caplocks, there were also boxlock percussion guns with the mechanisms located within the “box” or frame of the firearm, “mule ear” locks where the hammer is pulled outward from the lock rather than back, various underhammer arrangements, and more. This was all possible because of the greater simplicity of percussion ignition since all that was required was an action that struck a primer on the nipple. However, throughout the period, a standard sidelock or the mechanically similar back action lock remained the most common, particularly on long guns.

The author’s antique rifle from John Krider’s shop in Philadelphia c. 1840-1850 utilizes a back action lock. The internal mechanisms of a back action lock are very similar to a standard sidelock, but they are relocated behind the hammer as demonstrated on this lock by L&R.

By the Civil War, there was already a move towards breech loading firearms firing self-contained brass cartridges. Pinfire cartridges were invented in the 1830s and use essentially a small percussion cap inside a metal cartridge with a protruding pin. A hammer would then strike the pin, detonating the primer.

An in-depth discussion of the development of metallic cartridge firearms is not needed for our current topic, but what is relevant and important is that their development ultimately brought an end to the dominance of percussion firearms.

The gunlocks used on many early cartridge firing weapons were basically identical in form to the various lock types used during the percussion era which in turn were largely based on the internal mechanisms of the flintlock. As metallic cartridges became more popular, percussion firearms naturally faded into the background like matchlocks, wheellocks, flintlocks, and others before them, but they never fell fully from use. Many continue to shoot traditional sidelock percussion muzzle loading firearms today.

Rock Island Auction Company regularly features percussion and other early and antique firearms in our Premier, Sporting & Collector, and Arms & Accessories Sales each year. Any given sale may include many different percussion firearms over varying ages from very early antiques to modern day masterpieces by contemporary artisans and even more affordable factory built percussion pistols, rifles, and revolvers that are a great for learning to shoot and hunt.

If you are interested in buying a percussion firearm, please view our various auctions throughout the year. If you are looking to sell one, we are the #1 auction house in the world for antique and collectible firearms and are happy to help you sell an individual item or an entire collections of firearms.

As always, if there are any questions regarding consignment, registration, or future auctions, please contact Rock Island Auction Company today. Our 2021 auction schedule is now posted on our website, so be sure to go through the listing and start making your plans to visit. All our events adhere to all COVID-19 guidelines and restrictions. We can’t wait to see you here!

“A Preliminary Survey of Historic Period Gunmaking in Tennessee” by the Tennessee Department of Conservation, Division of Archaeology, Report of Investigations No. 8, 1991