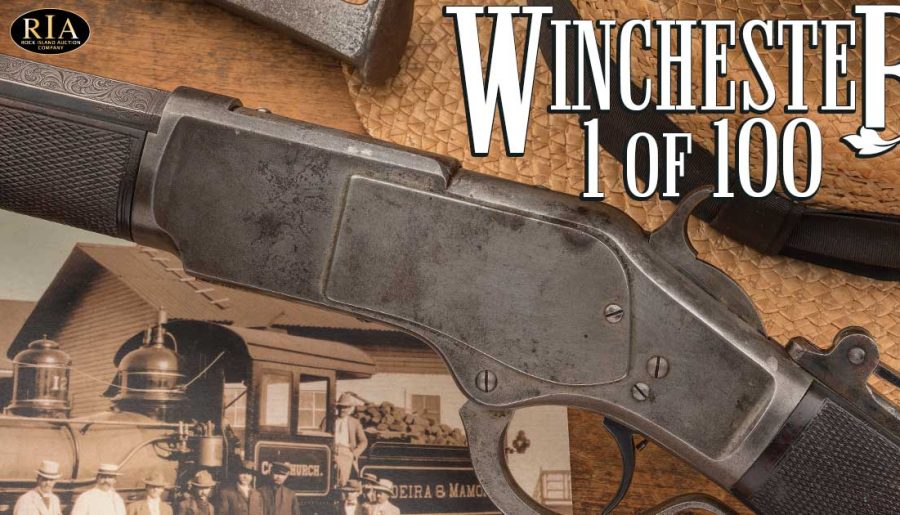 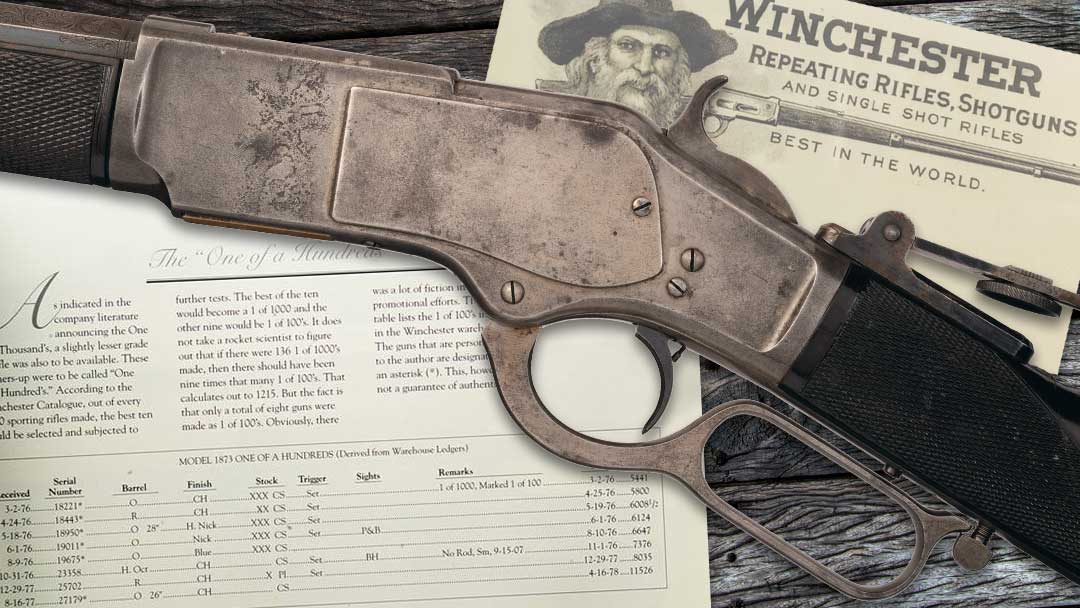 This rifle is illustrated and described on pages 113-118 of “The Story of the Winchester 1 of 1000 and 1 of 100 Rifles” by Edmund E. Lewis. Winchester referred to these special order rifles both numerically (1 of 100) and using their full wording (One of One Hundred) in their writing and advertisements, as well as on the rifle barrels.

Winchester Model 1873 serial number 27179 has been a centerpiece in some of the most esteemed firearms collections throughout the decades, including the Frank R. Sweet Collection, the Carl Press Collection, and The Robert M. Lee Collection. This phenomenally scarce 1 of 100 Winchester was certainly well cared for, though it also bears the marks of a rifle that was carried by its original owner through the unforgiving depths of the Amazon wilderness.

Calling the Winchester 1873 “the gun that won the West” may be overstated, but there’s no doubt that the sturdy lever action rifle became one of the bestselling guns of the era and continues to enjoy tremendous popularity with gun collectors today. Oliver Winchester’s steel-framed Model 1873 was a distinct improvement over the 1866 rifle and the 1860 Henry, and settlers pushing westward quickly took notice. 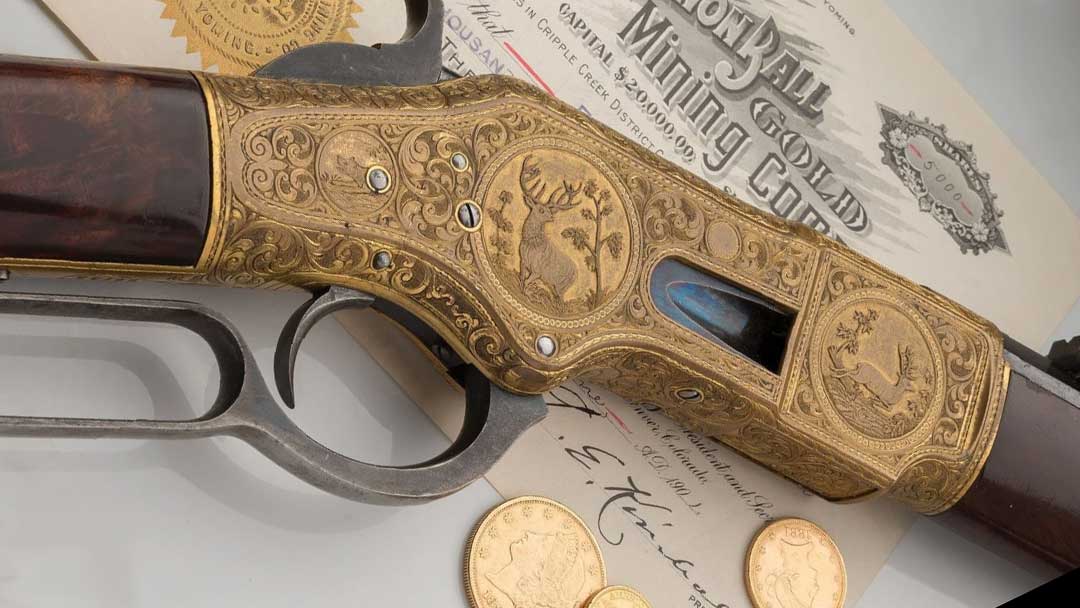 While the Colt Single Action Army revolver ruled the frontier streets, the Winchester 1873 rifle was king of the open range. The Model 1873’s tough frame, stronger chambering, and wide-scale availability helped elevate the rifle above its predecessors and solidified its reputation as one of the most American guns of all time. 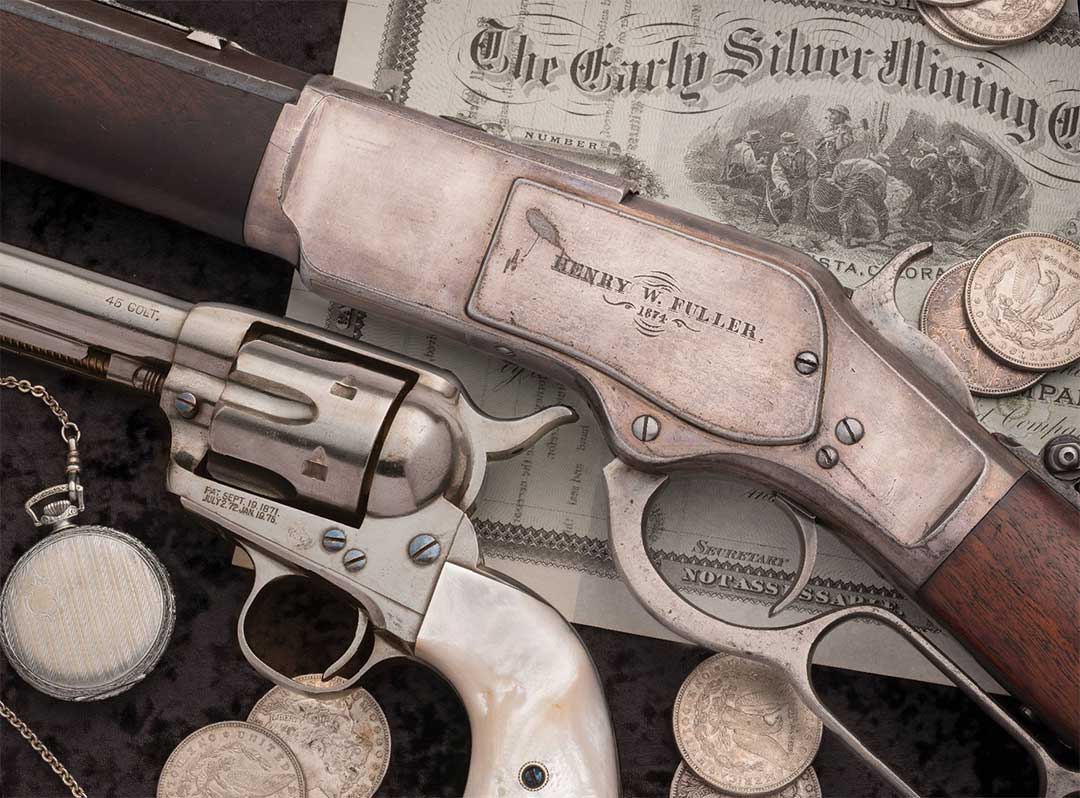 From movie sets to modern-day Cowboy Action Shooting competitions, the rugged Winchester 1873 has stood the test of time like few firearms before or since. In 1875, Winchester began to offer higher grade versions of the Model 1873 for sale. Enter the Winchester 1 of 100, one of the most elusive variations of the special order Winchester lever action rifle ever produced. 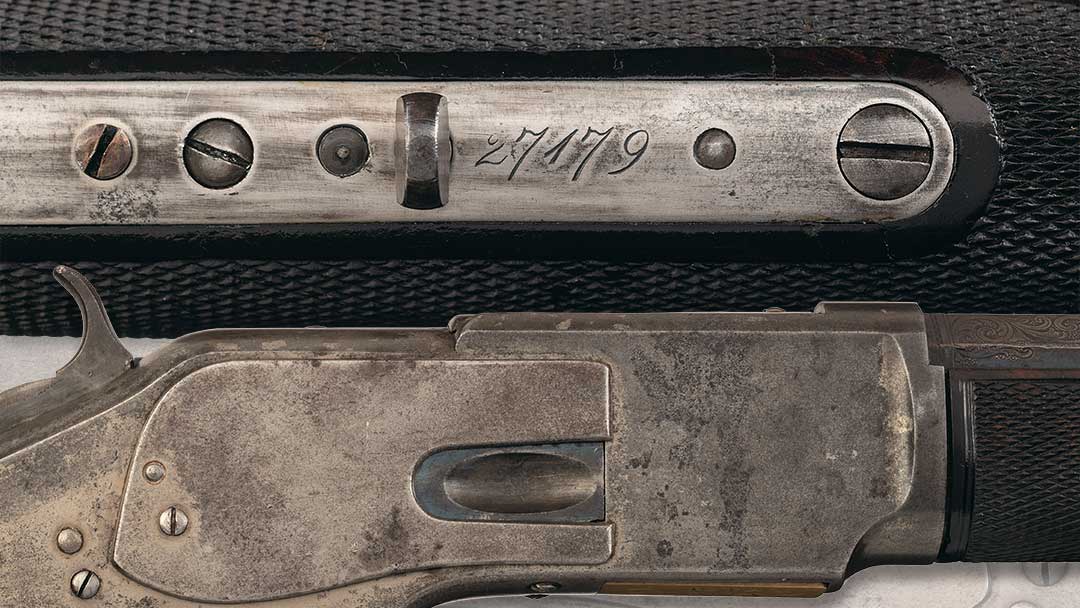 An extremely rare example of an original Winchester “One of One Hundred” First Model 1873 rifle with a Cody Firearms Museum letter.

The Model 1873 One of One Hundred rifles were announced in 1875 when Winchester discovered that a small percentage of their rifles shot with greater accuracy during factory testing. The company decided to distinguish these exceptional rifles and market them as special order premium models for its wealthier clientele. While the Winchester 1 of 1000 was sold as the model with the highest barrel accuracy, the 1 of 100 was offered as a middle ground between the standard Winchester 1873 and the pricey 1 of 1000.

A standard Winchester 1873 might cost around $50, but a One of One Thousand could range between $80 to $100 depending on the additional custom features. The Winchester 1873 One of One Hundred fell somewhere between the two, costing a committed frontiersman $60 to $75. For comparison, an acre of farmland in Kansas cost $13 or less in 1876. 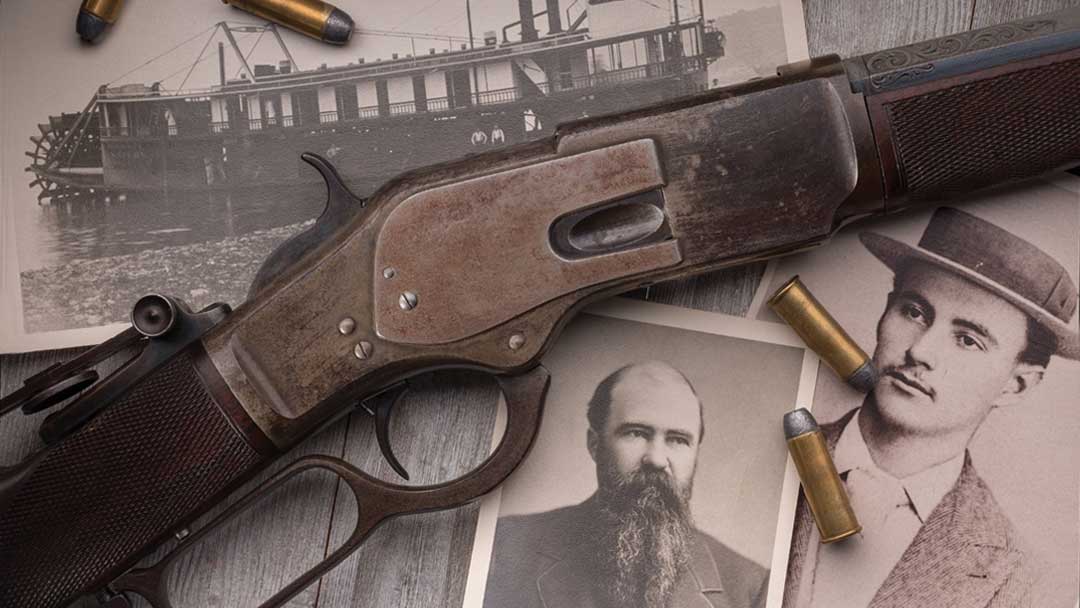 There were only 132 One of One Thousand rifles produced in the Winchester 1873 Model, and a scant eight of the Model 1873 One of One Hundreds– only six of which are known today.

“The barrel of every sporting rifle we make will be proved and shot at a target, and the target will be numbered to correspond with the barrel and be attached to it. All of these barrels that are found to make targets of extra merit will be made up into guns with set-triggers and extra finish and marked as a designating name, “One of One Thousand,” and sold at $100.00. The next grade of barrels, not so fine, will be marked “One of One Hundred” and set up to order in any style at $20.00 advance over the list price of the corresponding style of gun.” 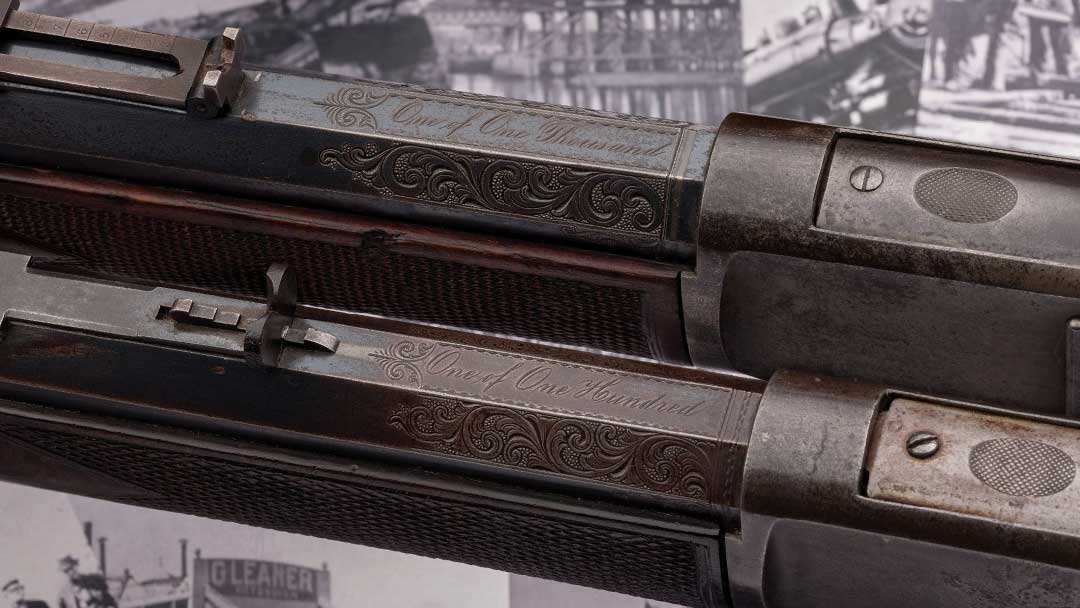 There were only 132 One of One Thousand rifles produced in the Winchester 1873 Model, and a scant 8 of the One of One Hundreds in total – only 6 of which are known today.

Montana pioneer Granville Stuart was certainly a fan of his Winchester 1 of 1000 rifle. In a letter he wrote to Winchester, he marveled, “If the Sioux should come a little further up this way, it will be a mighty handy thing to have in the house. If poor Custer’s heroic band had been armed with these rifles, they would have covered the earth with dead Indians for 500 yards around.” 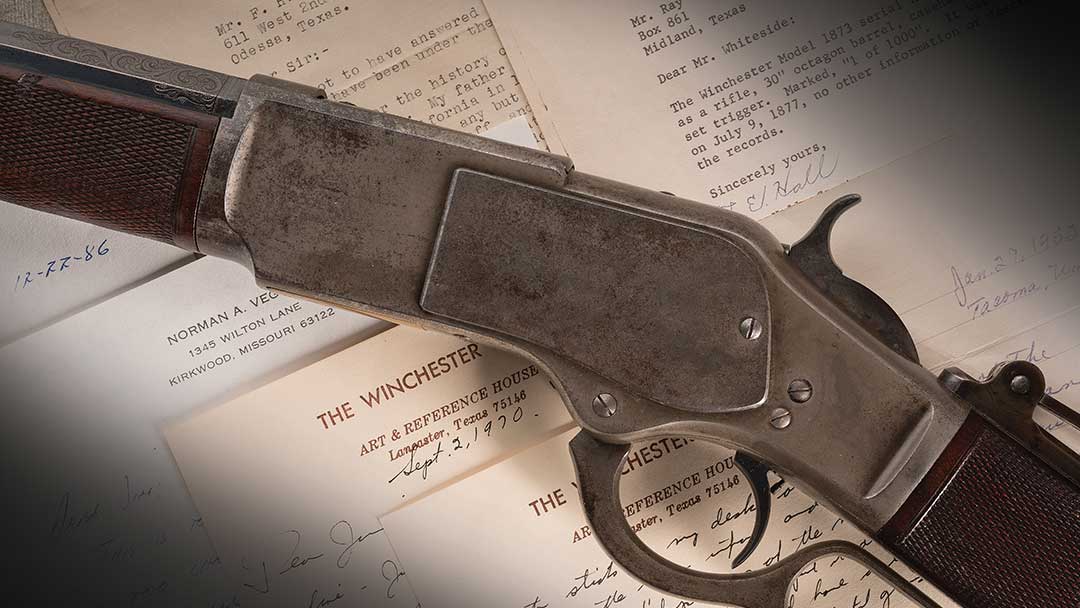 A Winchester 1873 is a rifle with a story all its own.

In 1950, Universal Pictures released “Winchester ’73”, a Western adventure starring James Stewart. A Winchester 1 of 1000 played a key role in the film, and Universal released advertisements before production started seeking these rare rifles as both a promotional campaign and a way to examine authentic 1 of 1000s to create an accurate reproduction for the upcoming movie. The success of “Winchester ‘73” helped stir renewed interest in both the 1 of 1000 and the even more elusive 1 of 100 rifles, and today both models are viewed as crown jewels in arms collecting.

Special order Winchester 1873 rifles were popular options with those who could afford the extra upgrades. For instance, a buyer could add special stocks, silver or gold finish, custom engravings and monograms, and select from a number of custom barrel butts, grips, triggers, magazine sizes, and barrel length and shape. Though not the most embellished rifles of their era, the Winchester 1 of 100 and 1 of 1000 would have been among the most desirable special order long arms for an experienced frontiersman, hunter, or a dedicated sportsman with the cash to spare. Engineer Robert Hepburn certainly found the investment worthwhile when he purchased the last Model 1873 One of One Hundred ever produced. 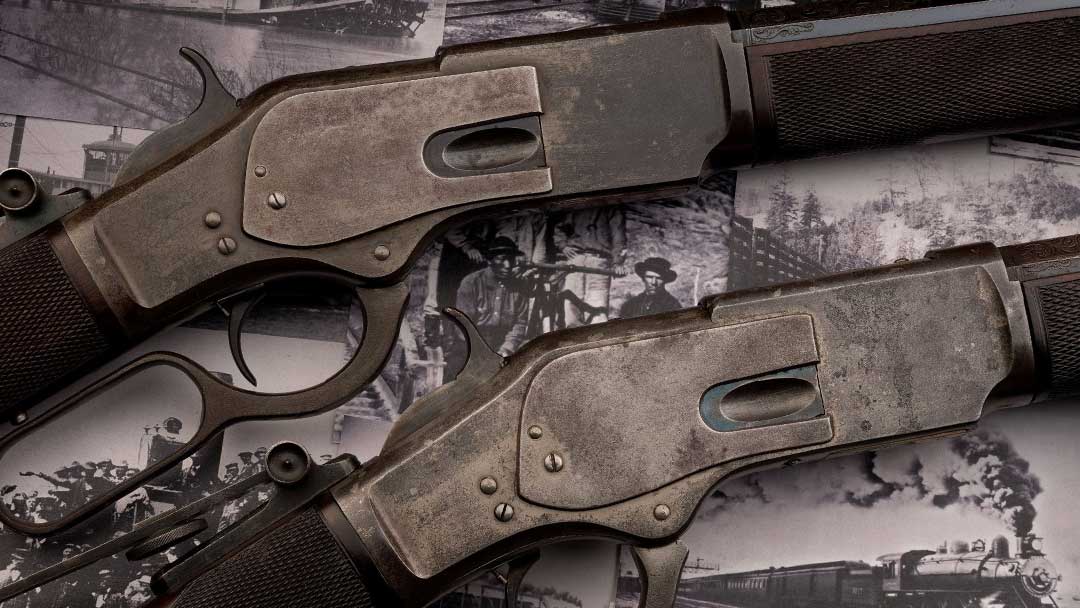 The Winchester 1 of 100 and 1 of 1000 are venerated by historians and collectors today.

The Cody Museum letter that accompanies Robert Hepburn’s Winchester 1 of 100 states that the rifle was received in the Winchester warehouse on August 16, 1877, and shipped on April 16, 1878. In the letter, the rifle is described as “Type: Rifle, Barrel Type: Octagon, Barrel Length: 26 inches, Trigger: Set, Checkered stock, Casehardened.” 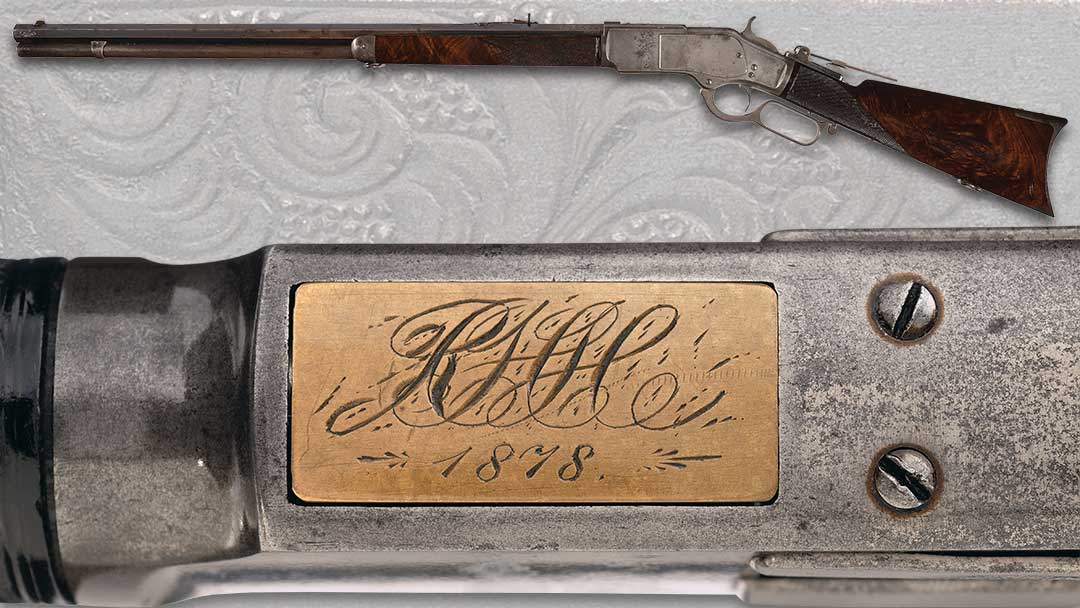 Mr. Robert Hopewell Hepburn’s monogram and year of purchase are forever engraved on the bottom of the rifle’s elevator.

The rifle has the Winchester 1873 First Model receiver with a dust cover retained by grooved guides. “One of One Hundred” is engraved on a panel at the top of the barrel in script letters and surrounded by scroll and foliate engraving on a punch-dot background that extends to the barrel side flats, a style unique to the five 1 of 100 Winchester rifles produced with octagon barrels.

Mr. Robert Hopewell “Hope” Hepburn was a graduate of the College of New Jersey (now Princeton University) in 1871. Less than seven years later, his skills would be put to the test in the “Collins Expedition,” an early attempt to connect Bolivia to the Atlantic Ocean Railroad in Brazil. Hepburn’s Winchester 1873 One of One Hundred accompanied him as he sailed over 3,800 miles by tugboat and braved the treacherous Amazon River. 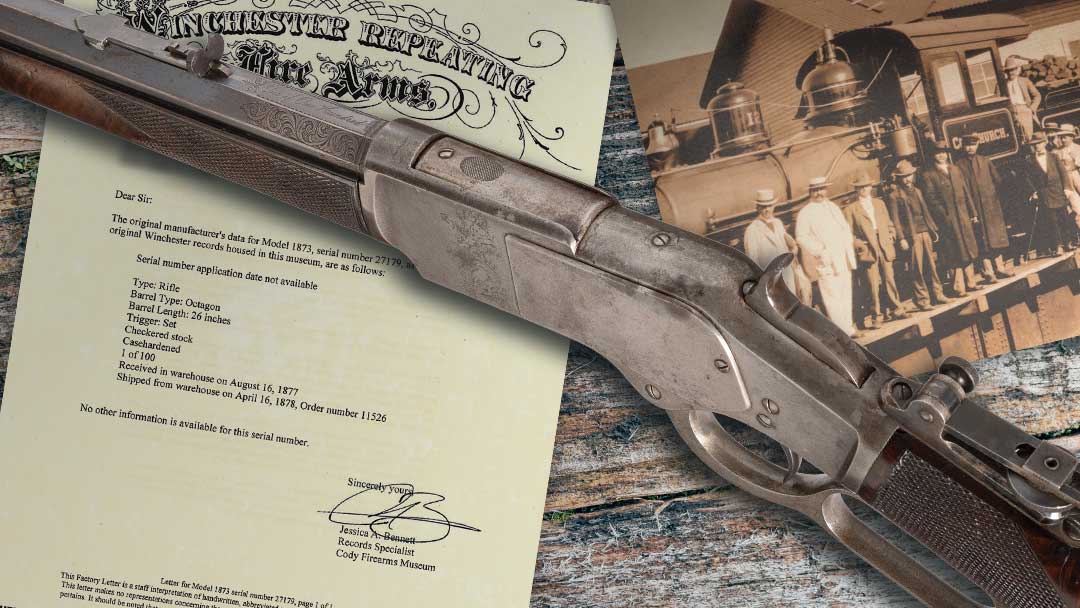 Locomotive No. 12 of the Madeira-Mamoré Railroad.

Hepburn’s travels took him down the eastern coast of the United States, through the Caribbean Sea, along the South American coast to the Brazilian state of Para. He was in charge of surveying for the expedition and managing the two tugboats the Collins brothers’ crew would have relied upon as they attempted to lay the groundwork for a railroad along the falls and rapids of the Mamoré and Madeira Rivers. 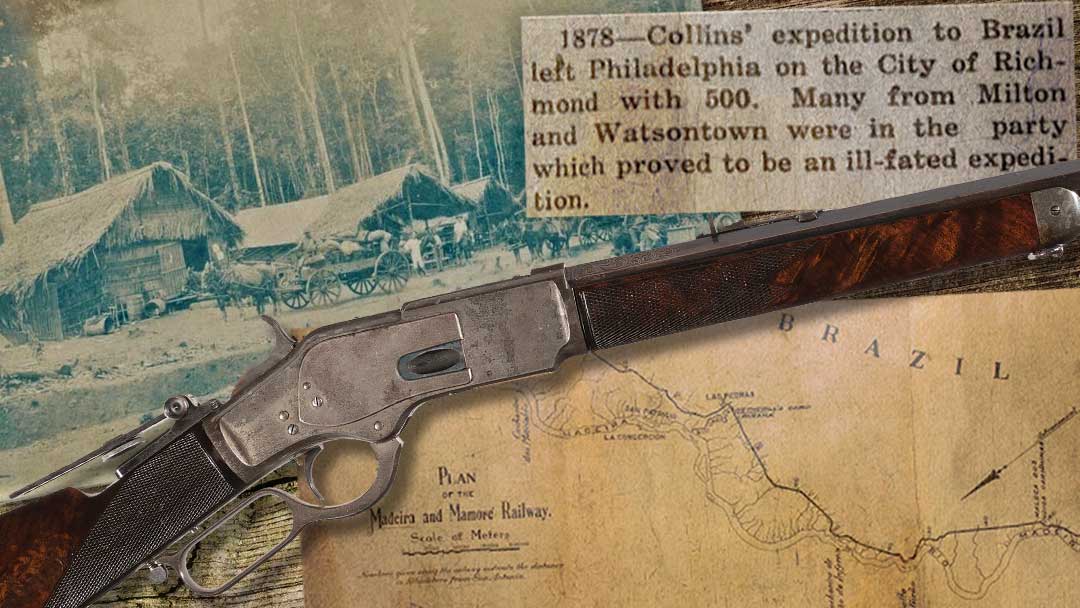 Philip, Thomas, and Peter Collins, who’d constructed much of the railroad network in Pennsylvania, saw the Madeira-Mamoré Railroad expedition as a lucrative opportunity to access Bolivian rubber markets. Robert Hepburn noted in his 67-page manuscript that some of the men carried rifles and put their weapons to work as they navigated the dangers of the rainforest.

Robert Hepburn’s written account of the adventure is titled: Transportation on the Amazon and Madeira Rivers with The Disastrous American Expedition of 1878. In the manuscript, he recounts numerous times when firearms were employed for hunting and discouraging both alligators and aggressive tribesmen. On protecting the local workers, Hepburn notes, “They would not return to their camp the next morning unless escorted by an armed guard, so we accompanied them with our Winchesters and skirmished in, among, around, and beyond their shacks… The Indians rarely attempted an attack on a number of armed men.” 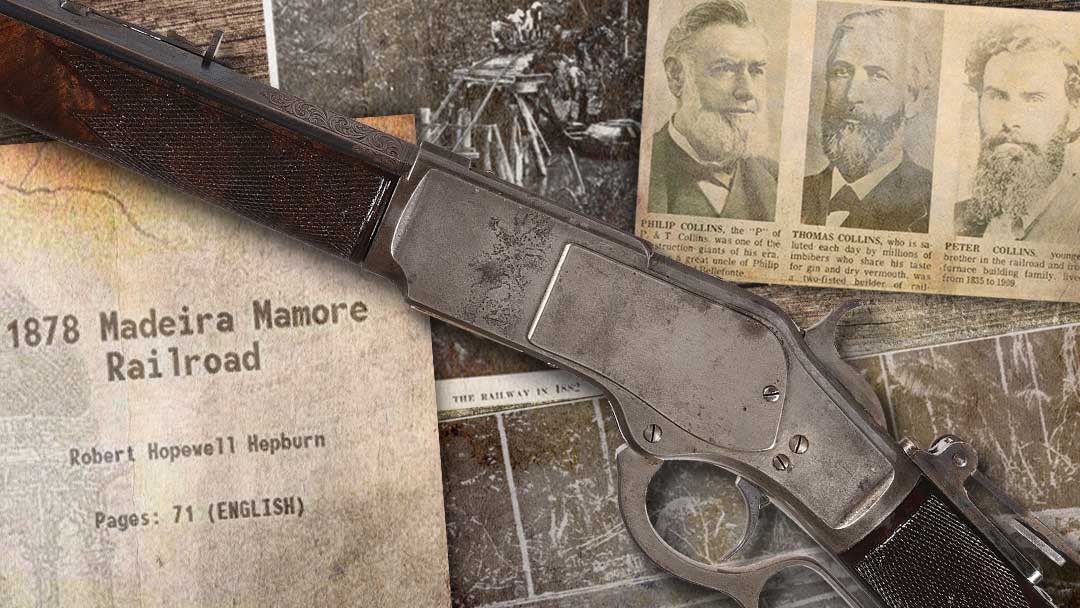 “Well, they couldn’t find anybody else in the United States hardy enough to go out in charge of these boats, so they hunted up you.” – Robert Hepburn’s neighbor, remarking on his role in the Collins Expedition.

In addition to skirmishes with indigenous tribes, diseases like scurvy, dysentery, yellow fever, and other medical ailments took their toll on the Collins Expedition. Reports indicate that one out of every four men brought to work on the Madeira-Mamoré Railroad perished, and Hepburn’s account states that only 26 of the original 54 engineers survived. 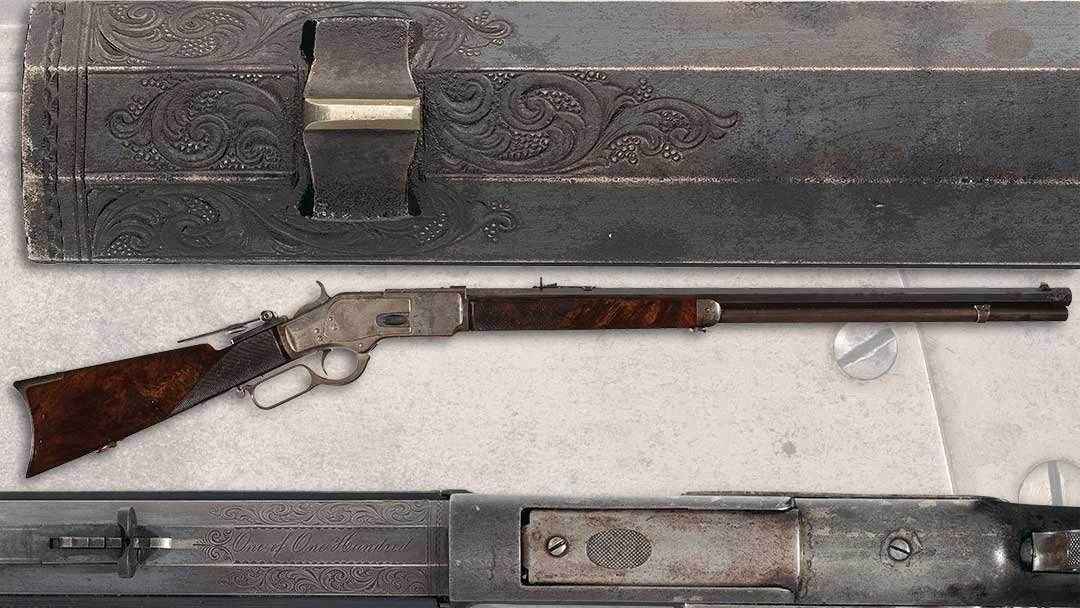 The Winchester 1873 rifle was designed to face the rugged challenges of the wilderness.

In Neville B. Craig’s Recollections of an Ill-Fated Expedition to the Headwaters of the Madeira River in Brazil, one worker states, “the men were not accustomed to the jungle, and found it near impossible to make any progress cutting their way through. Supplies and food were lacking, and the men were sieged by insects day and night. Of the 941 Americans who went to Brazil, it is known positively that 221 died, a mortality rate of 23.6%. Many died of tropical fever, and, possibly, starvation.” 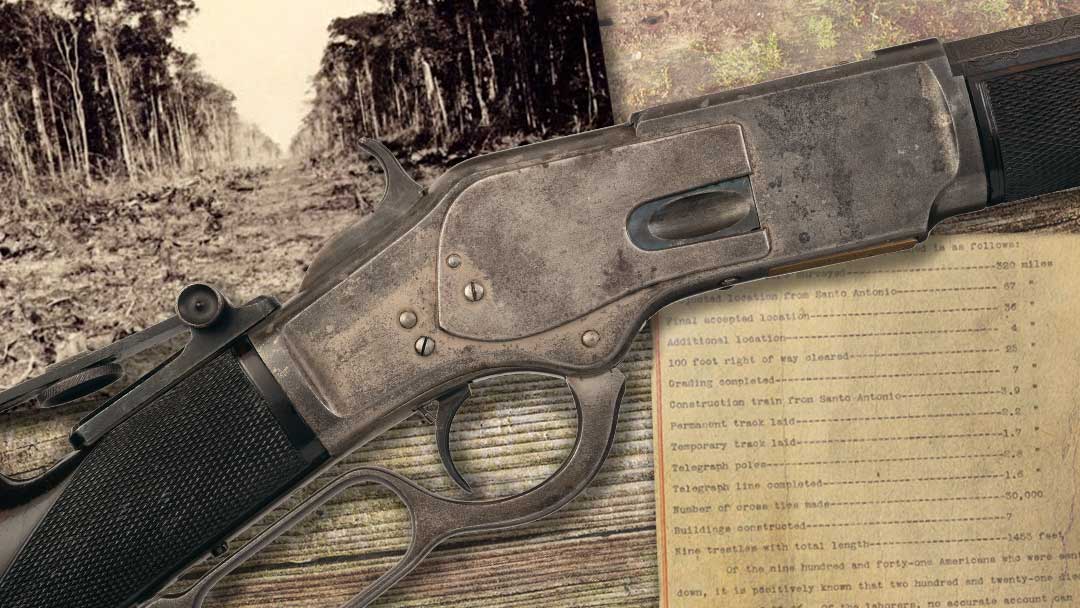 The Winchester 1873 lever action rifle was a dependable piece of late 19th-century technology for those who could afford it.

Though the Collins Expedition ended in disaster, a subsequent effort to build the railroad began in 1907, a five year bid to tame the deadly terrain and navigate the dangers that had consumed previous endeavors. In his book, Brazil, novelist Errol Lincoln Uys speculated that up to 10,000 lives were lost constructing the railroad, and some estimates place that figure even higher, leading to it being nicknamed ‘the Devil’s Railroad.’ 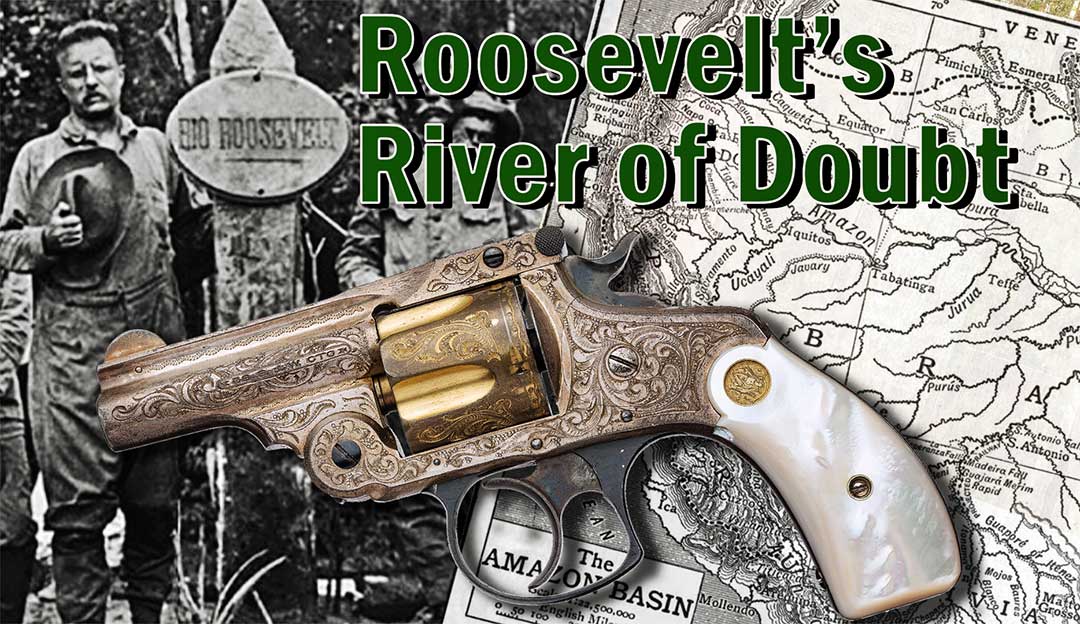 The Amazon had long been an obstacle for adventurers like Theodore Roosevelt, whose exploration of the river basin in 1913 also ended in disaster.

One of the Rarest Winchesters

The Winchester 1873 came to embody the quintessential American rifle, and the One of One Hundred featured in Rock Island Auction Company’s May 13 – 15 Firearms Auction has a remarkable story that more than lives up to its lofty status as a legendary firearm. Owning a gun produced during the frontier era is one thing. Owning a gun that participated in the era, that traveled, fought, and helped deliver its owner home again amid overwhelming odds is something else entirely.

As the world’s number one firearms auction house, Rock Island Auction Company offers some of the finest Winchester rifles publicly available today. As a legacy lever action rifle, one of only six known 1 of 100 Winchesters, and the final rifle of its type produced, Robert Hepburn’s 1873 One of One Hundred ranks as one of the rarest Winchester rifles known. 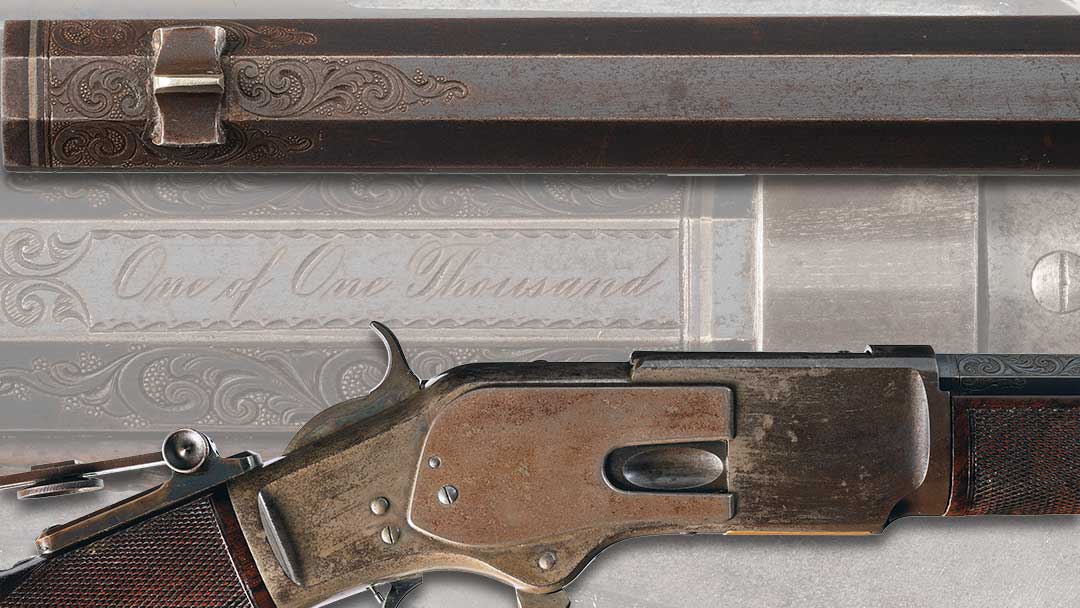 A treasure passed from father to son. Captain Winan’s son George was gifted this Winchester One of One Thousand and “only used it for target practice.” It survives in outstanding condition.

Winchester’s effort to distinguish these extra-accurate rifles as an elite model was a short-lived promotion, as the gun maker worried that the public might perceive the standard lever action models as significantly inferior to their 1 of 100s and 1 of 1000s brethren. For historians, Old West aficionados, and fine arms collectors interested in the most exclusive level of gun collecting, these ultra-rare Winchesters represent the highest level of the pursuit. 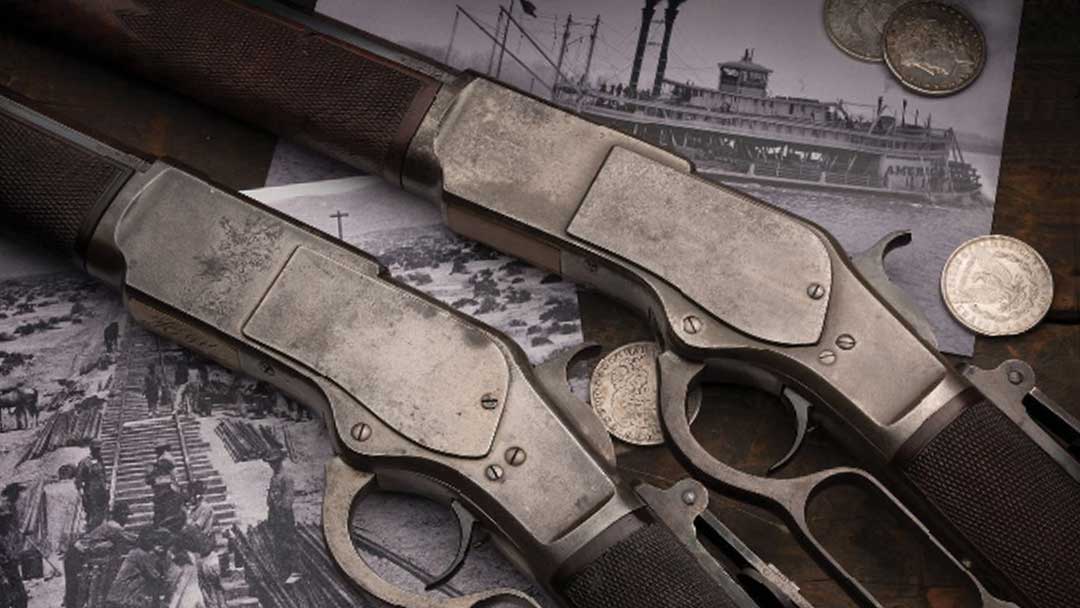 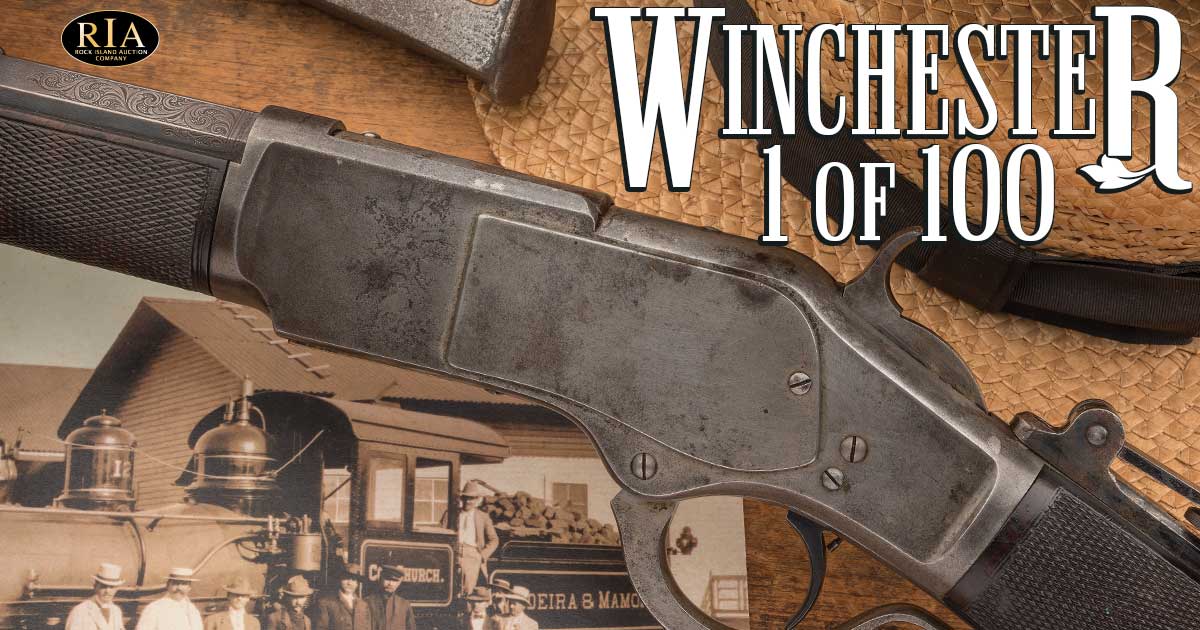