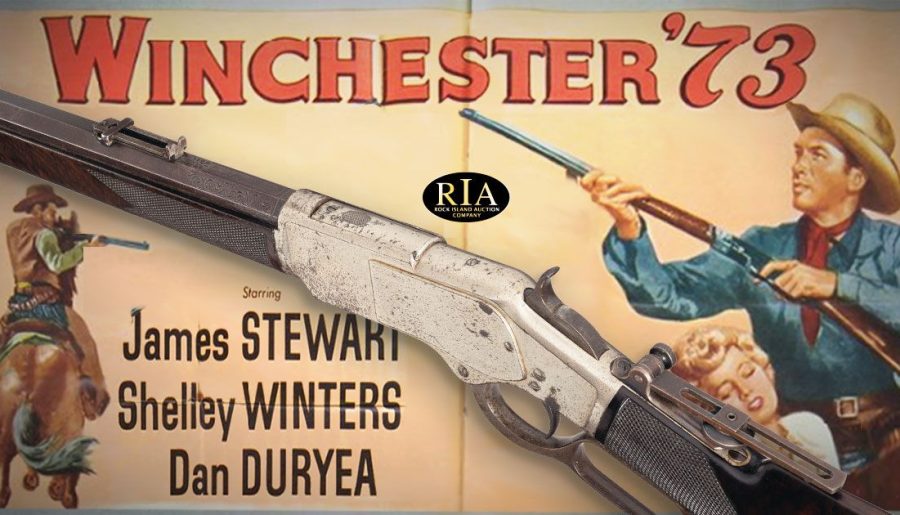 In 1950, Universal-International released Winchester ’73, a movie that helped revive both the classic Western genre and James Stewart’s post-war acting image. The film was praised by critics and moviegoers alike, winning an award for Best Written American Western by the Writers Guild of America. Today, Winchester ’73 is widely considered one of the top Golden Age Westerns and is remembered fondly by fans of the gun that inspired the iconic film. 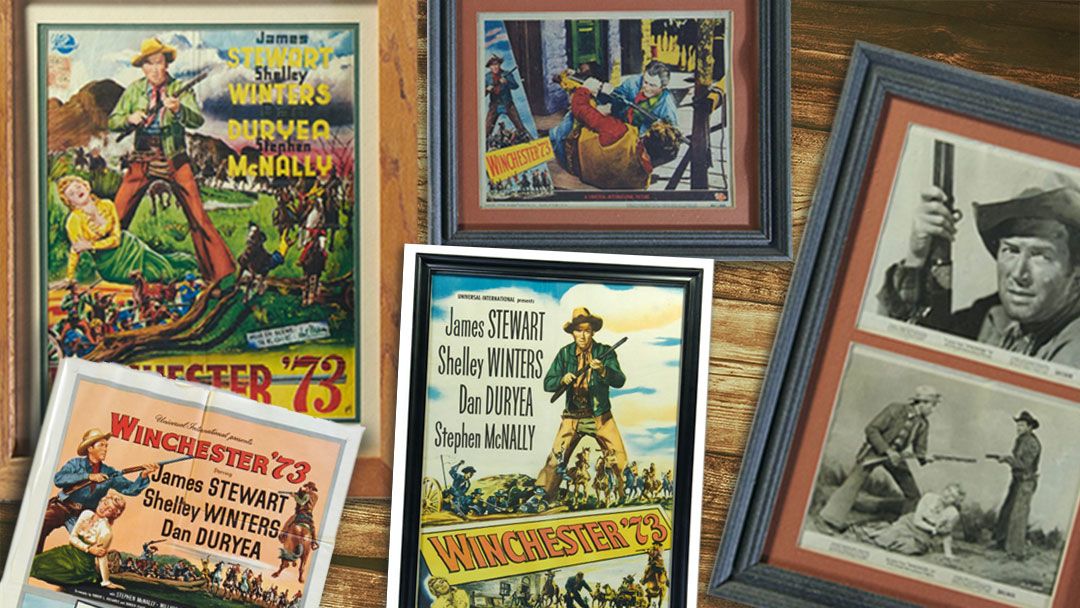 Grouping of five prints related to the Winchester ’73 film, perfect for displaying next to your classic Winchester rifles.

Author Stuart Lake, best known for penning the fictionalized biography of Wyatt Earp, wrote the original story concept for Winchester ‘73.  Lake claimed his manuscript was based on a historic Winchester 1873 that was won in a shooting match and later, after being “traded, pawned, lost as a gambling debt”, the rifle was taken to Caldwell, Kansas, and presented to Marshal Henry Brown. While Henry Brown’s rifle is real, Stuart’s account is highly embellished.

The Winchester ’73 movie’s central conflict (and arguably the film’s true star) is a Winchester 1 of 1000 rifle, a gun that takes an epic journey across the frontier as it passes between cowboys, outlaws, and Indians who seek to own the incredible weapon. We’ll take a look at some of the history and lore behind the film, and examine the guns portrayed on screen. Needless to say, there are numerous spoilers ahead. You’ve been warned!

Search for the Winchester 1 of 1000 Rifles

As part of the publicity campaign surrounding the release of the Winchester ’73 movie, Universal ran magazine ads before production seeking to find some surviving examples of the rare 1 of 1000 Model 1873 Winchester rifle and collect information on the guns. Universal wrote “Remember, we don’t want your “One of One Thousand” Model 73. We are only trying to find out how many of them are still in existence.” 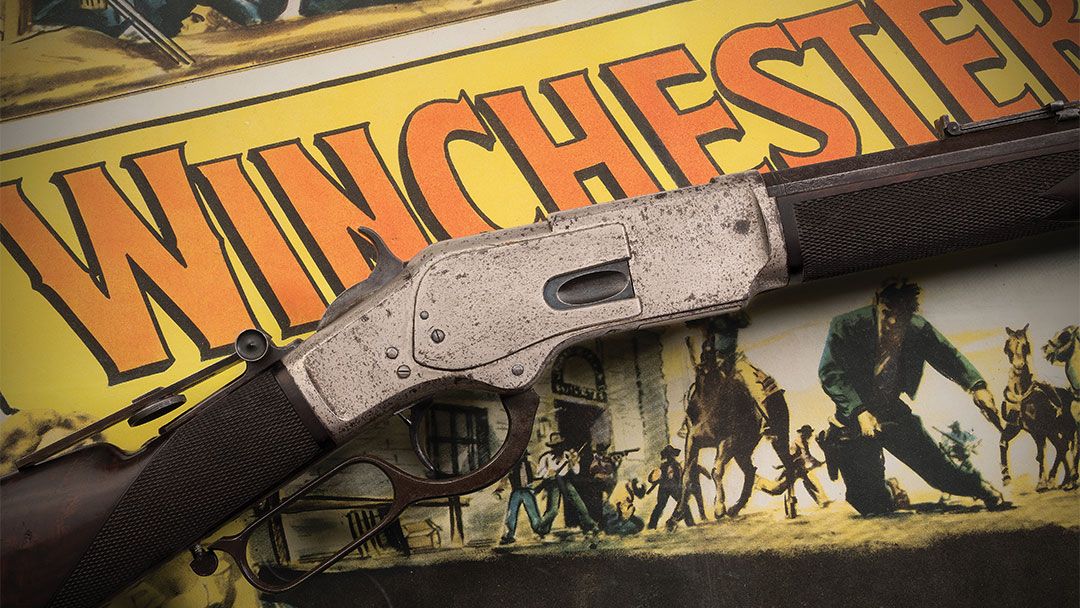 A 1 of 1000 that started gaining attention in the collecting world after the release of Winchester ’73. This rifle won the Texas Gun Collector Association award for the most outstanding weapon of the show at San Antonio, Texas, on September 27, 1966. Available this August.

The owner of a potential 1 of 1000 had to supply a photo of their rifle and a notarized letter of ownership, the serial number, and any additional information known about the gun, and the reward for the first 20 authentic respondents was a new Model 1894 rifle. The program was a success, bringing 22 previously unknown Winchester 1 of 1000s into the public eye and sparking a renewed interest in antique gun collecting that continues to persist today. 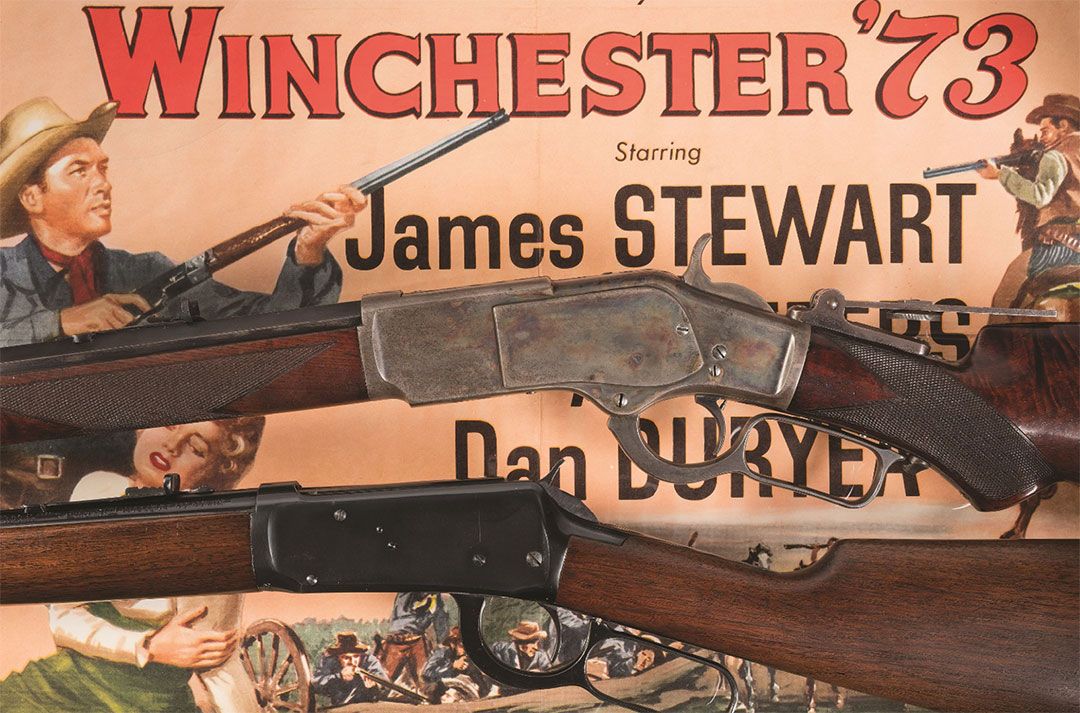 A Winchester 73 One of One Thousand that was reported to Universal Pictures, and the Winchster Model 94 carbine presented by Universal to the rifle’s owner as part of the ‘Winchester ’73’ search.

In a fall, 1950 press release, Universal wrote, “From obscurity these unique “One of One Thousand” Winchester Model 1873 rifles have graduated within only five months into one of the most sought after collector’s items in the country. Even garden variety Model 1873’s have doubled in price in the last few months.”

The Winchester ’73 movie opens with a title card declaring, “This is the story of the Winchester Rifle Model 1873 “The gun that won the West” To cowman, outlaw, peace officer or soldier, the Winchester ’73 was a treasured possession.” The film’s assertion is largely accurate, as Oliver Winchester’s steel-framed Model 1873 was one of the bestselling guns of the era. 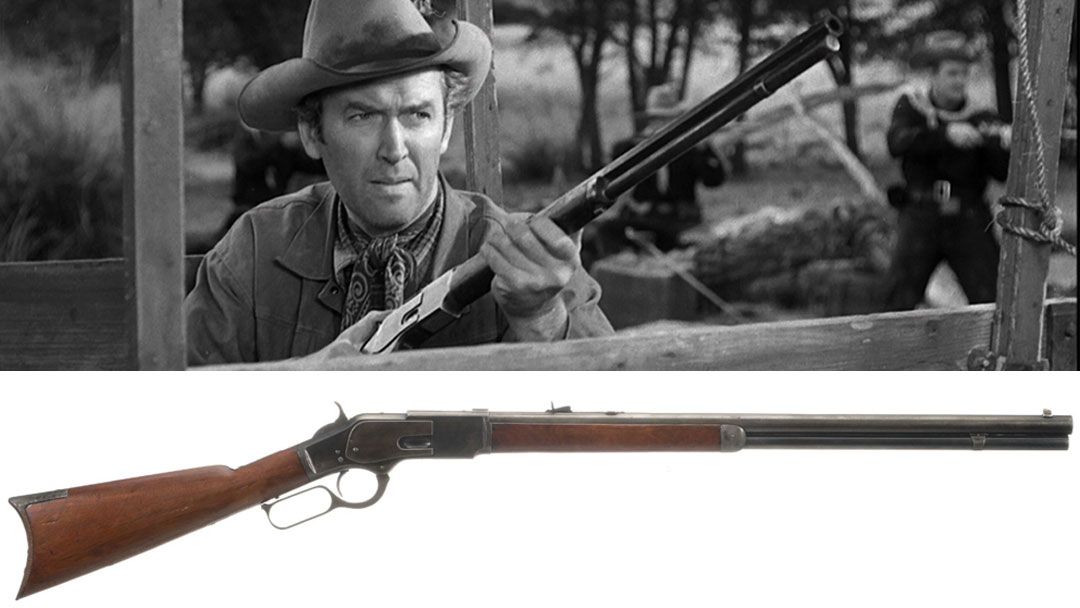 James Stuart is an eagle-eyed marksman with the Winchester 73 rifle.

Lin McAdam (James Stewart) and his faithful sidekick ‘High-Spade’ (Millard Mitchell) ride into Dodge City searching for someone they suspect will be drawn into a shooting contest to commemorate the U.S. Centennial. The grand prize is a coveted Winchester 73 One of One Thousand rifle. 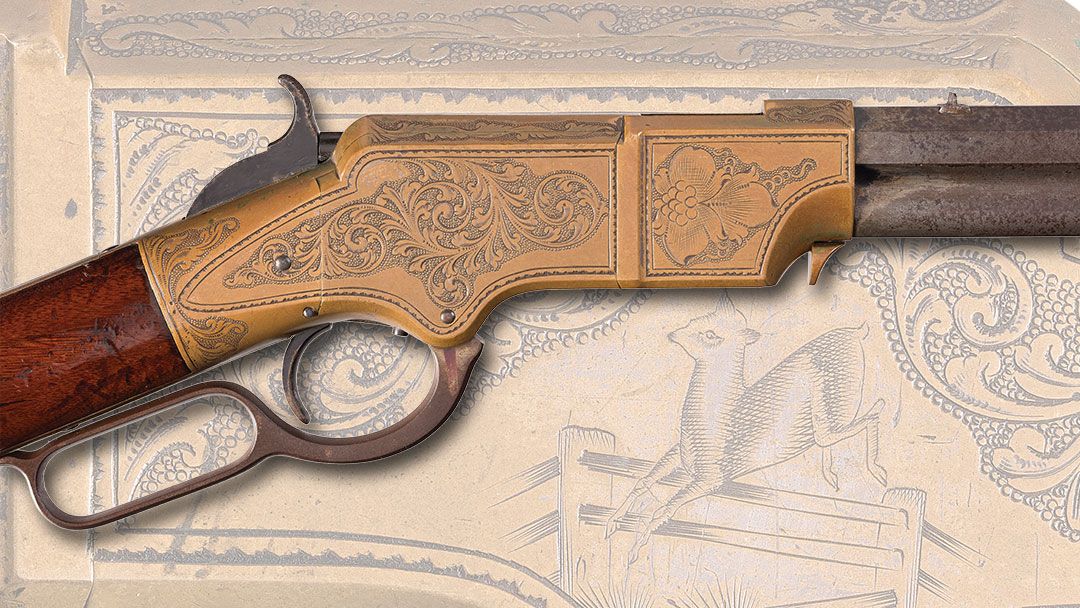 “My old man shoots a Henry and he says it’s the best gun there is,” one child proclaims when the Winchester 1873 is declared the finest repeating rifle in existence. Example shown above Available this August.

Lin decides to enter the shooting contest himself after admiring the engraved rifle in the window. The treasured Winchester has captured the attention of the entire town, including Marshall Wyatt Earp. “The finest gun in the world,” Earp states, holding up the prized 1 of 1000 before the competition and noting that every so often, a Winchester 1873 comes out “just perfect.” 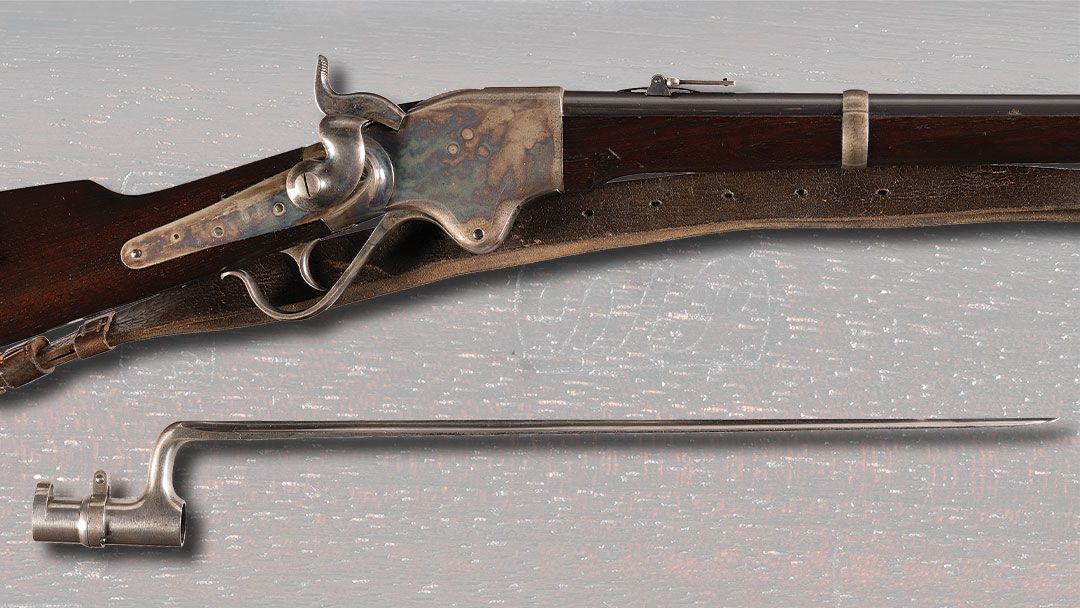 The Spencer rifle is also brought up as the crowd debates which repeating rifle is superior. Available this August.

Historically, the Winchester One of One Thousand rifles were announced in 1875 when Winchester Repeating Arms Company discovered during factory testing that a small fraction of their rifles shot with greater accuracy. The company decided to market these exceptional rifles as a premium model that could be obtained through special order. 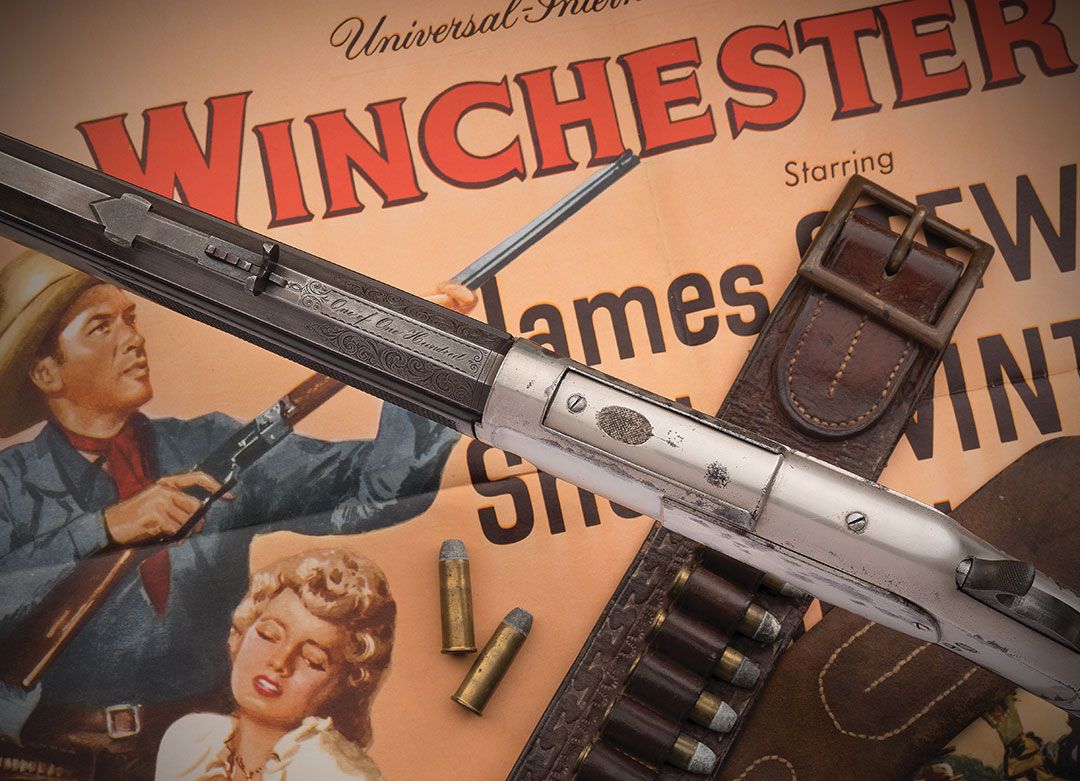 With close ties to the “One of One Thousand” rifles, the Model 1873 “One of One Hundred” rifles are far rarer with only eight manufactured, and represent one of the most elusive variations of special order Winchesters. Available this August.

As Winchester described in their catalogs, “The barrel of every sporting rifle we make will be proved and shot at a target, and the target will be numbered to correspond with the barrel and be attached to it. All of these barrels that are found to make targets of extra merit will be made up into guns with set-triggers and extra finish and marked as a designating name, “One of One Thousand,” and sold at $100.00.”

While a standard Winchester 1873 cost around $50, a One of One Thousand rifle could cost a determined buyer up to $100 or more depending on the additional custom features requested. In an era where farmland could cost less than $15 dollars an acre out west, these exceptional Winchesters were truly a luxury firearm for most frontiersmen. In the Winchester ’73 movie, Indian trader Lamont (John McIntire) offers $300 dollars for the rifle, and Wyatt Earp declares he’d “give up my left hand” for it. 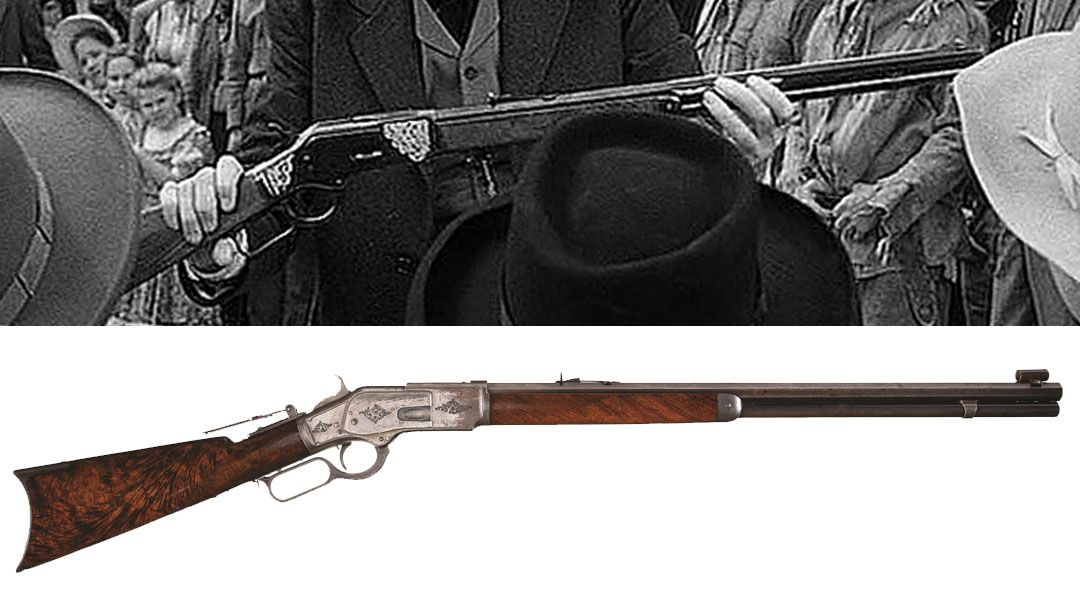 In the Winchester ’73 movie, Lin and his rival, Dutch (Stephen McNally), enter the shooting competition that’s presided over by Wyatt Earp and Bat Masterson. Historically, Earp and Masterson did indeed serve as Dodge City law enforcement during the time period, and writer Stuart Lake was well acquainted with both men. 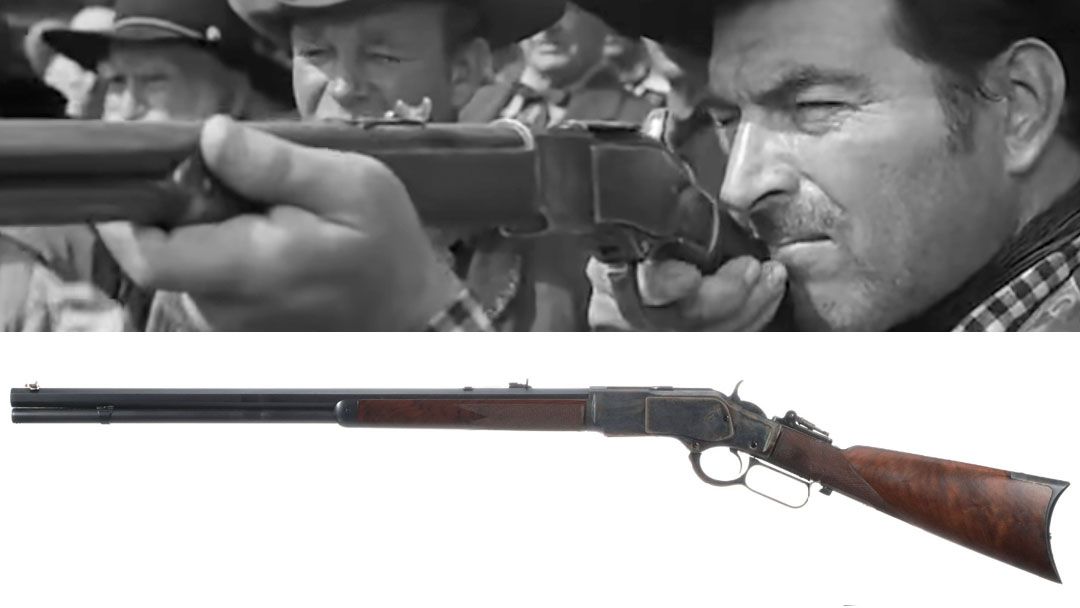 Lin’s rival, Dutch Henry Brown, puts up an impressive showing with his Winchester 73.

After tying in the first round, Lin and Dutch take turns landing shots on increasingly difficult targets, with Lin finally winning the contest by putting a bullet through the center of a stamp. Director Anthony Mann said that James Stewart practiced so hard with the Winchester rifle that his knuckles bled. Stewart did most of the shooting himself, only relying on renowned marksman Herb Parson to perform the final trick shot. 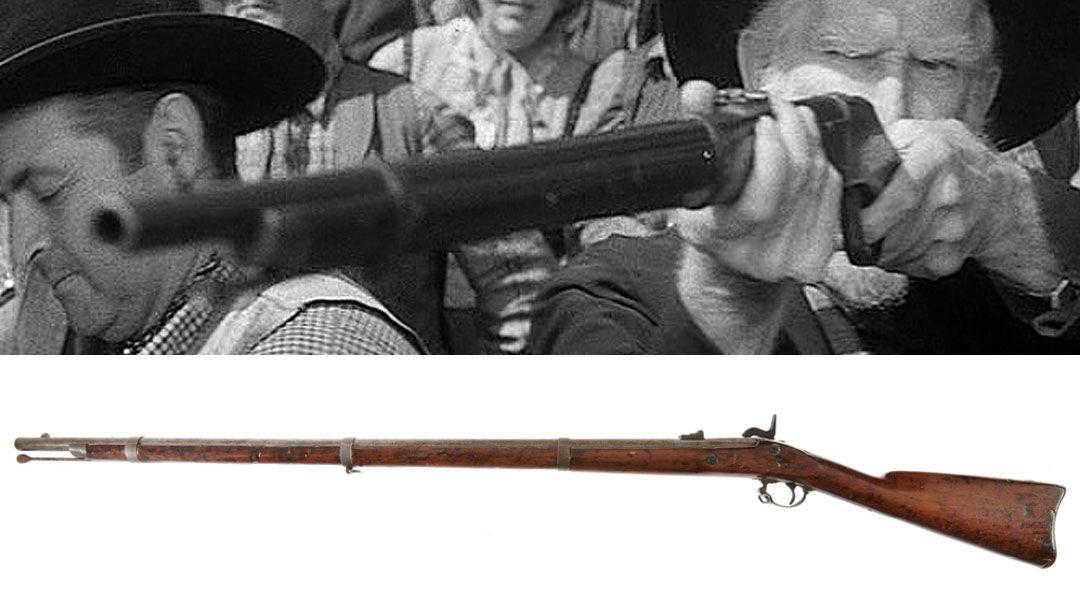 One of the other competitors uses a Springfield Model 1861, an accurate muzzleloader rifle.

Lin is presented with the Winchester 1 of 1000 for his marksmanship, but his victory his short-lived when Dutch jumps him and flees town with the remarkable rifle in tow. Winchester ’73 then becomes a film about the rifle’s journey and how the desirable gun changes hands and impacts the colorful cast of Old West archetypes it encounters between Dodge City and Tascosa, Texas. 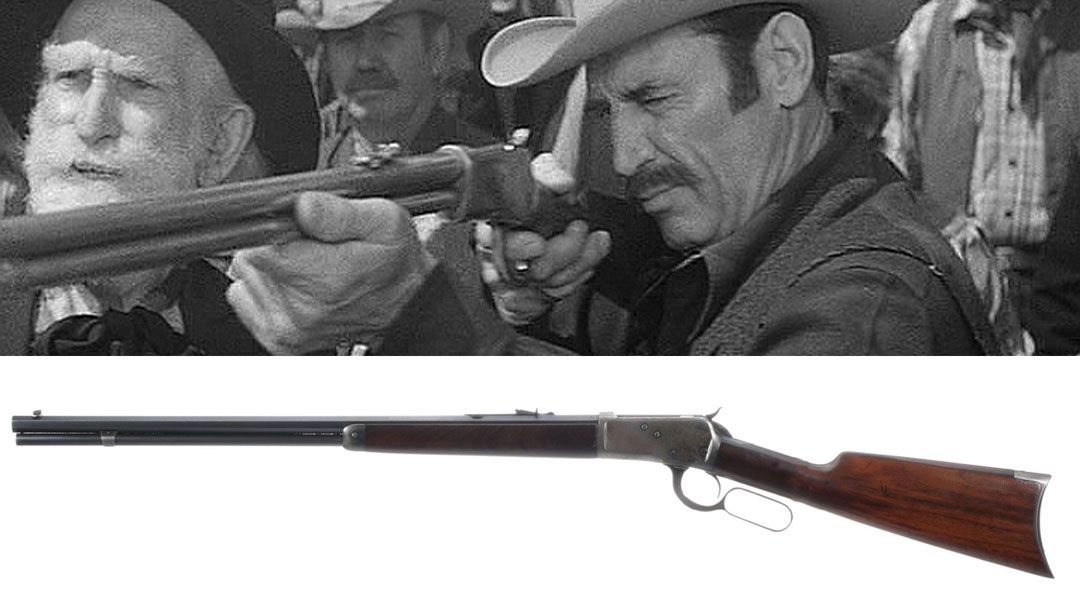 Another competitor shoulders the anachronistic Winchester 1892, a favorite in Hollywood Westerns of the era due to its smooth action and wide availability.

“Here you’ve got all these men… running around to get their hands on this goddam rifle, instead of going after a beautiful blonde like me.”   – Actress Shelley Winters on ‘Winchester ’73’

In the Winchester ’73 movie, the Dodge City shooting competition takes place on July 4, 1876, the 100th anniversary of the signing of the Declaration of Independence. True to the film, the American Centennial was one of the most culturally significant events of 19th century and major gun manufacturers like Winchester used the celebration as an opportunity to display their latest offerings. 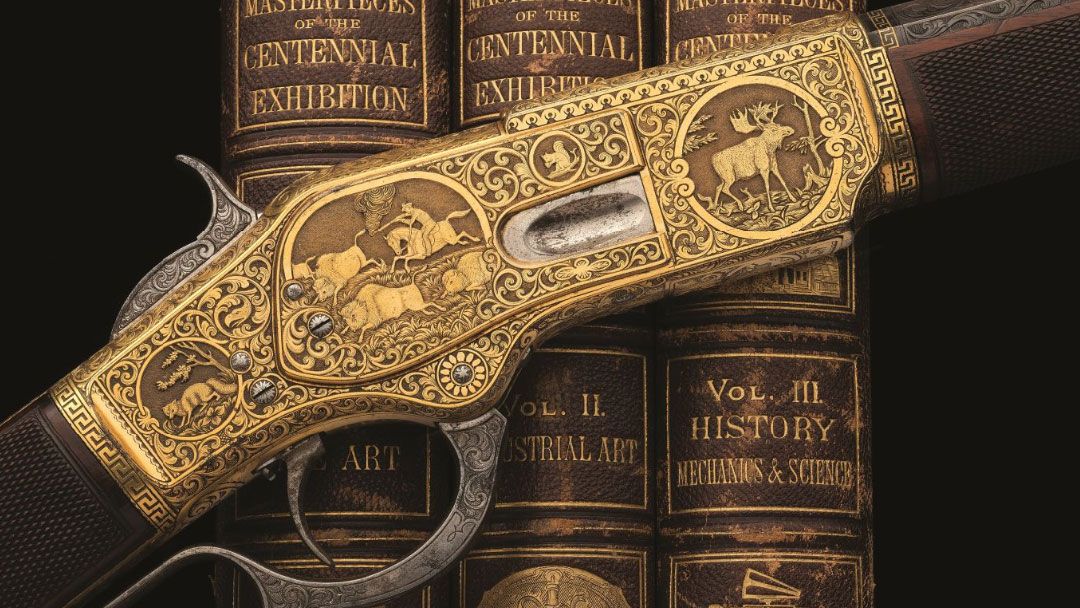 The 1876 Philadelphia Centennial Exposition was a showcase for American ingenuity, and Winchester spared no expense. The intrepid gunmaker exhibited nearly 200 firearms representing about 50 different styles and unveiled a variety of new ammunition for their rifles. Representatives from the frontier states and territories painted the West as a land of opportunity for the resourceful pioneer, but word of Custer’s defeat at the Little Bighorn cast a shadow over the celebration. 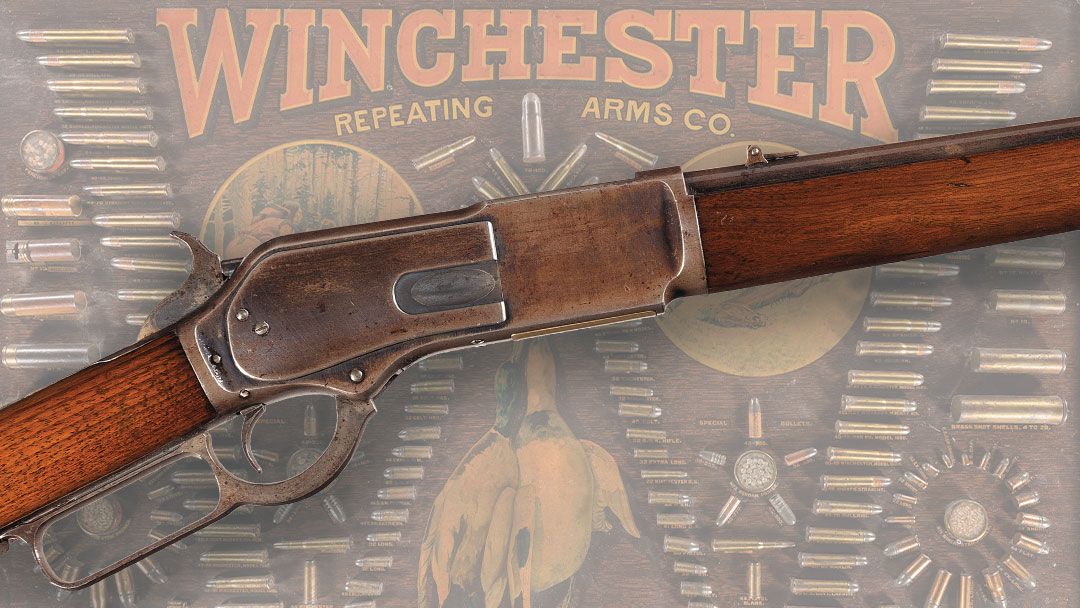 In the Winchester ’73 movie, news of the Little Big Horn is starting to reach the far-flung corners of the frontier, and everyone is on edge, including a U.S. Cavalry camp that Lin and High-Spade encounter. Lin attributes the Lakota victory to their use of repeating rifles, commenting, “It seems they knew all about your Springfields being single-shot. They sent in the first wave light so it’d draw the fire! Then they sent in a heavy second wave before the Custer men had a chance to reload!” 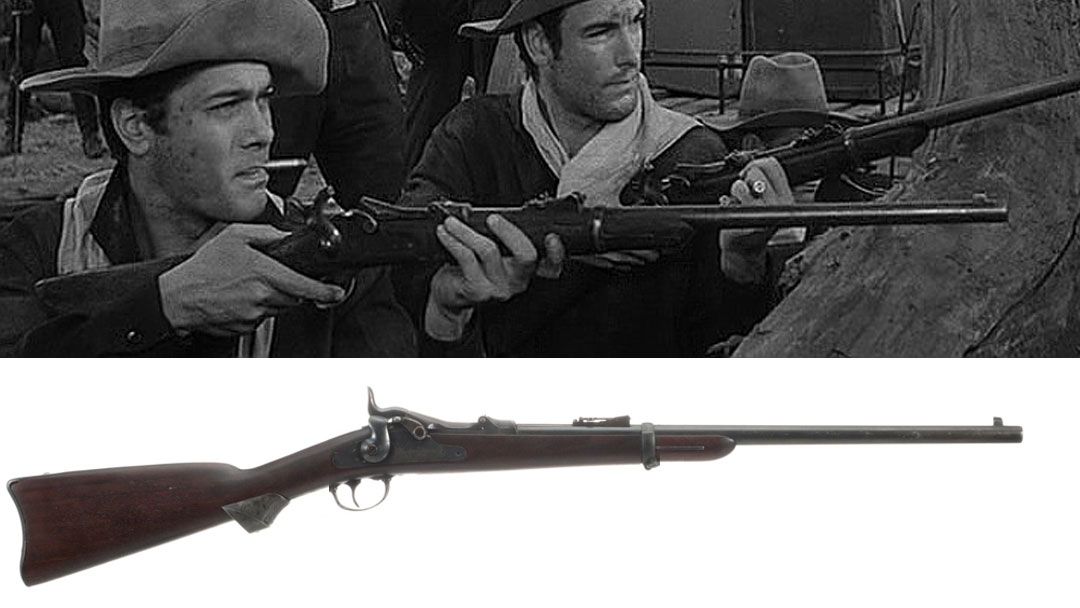 The 1873 Springfield trapdoor carbines were a widely used U.S. military shoulder arm of the era.

Some Native Americans did use repeating rifles at the Little Bighorn, and settlers like Granville Stuart lamented that the 7th Cavalry weren’t equipped with Winchester 1873 rifles instead of the Springfield 1873 trapdoor carbine. In a letter to Winchester, Stewart wrote, “If poor Custer’s heroic band had been armed with these rifles, they would have covered the earth with dead Indians for 500 yards around.” 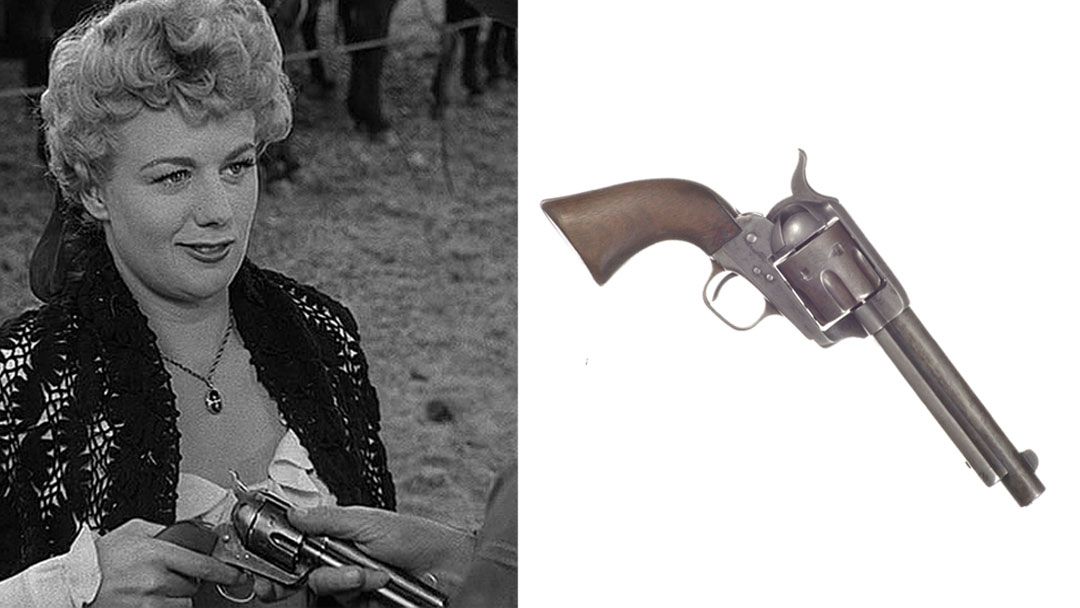 Even Lola (Shelley Winters) gets in on the action with a Colt SAA, Hollywood’s favorite Western gun.

The shootout in Winchester ’73 between the U.S. Cavalry and Young Bull’s band is likely inspired by the Wagon Box Fight, a historic battle that occurred 9 years earlier near Fort Phil Kearny, Wyoming. Two of the guides in the Wagon Box Fight were equipped with Henry rifles and reportedly discharged over 100 rounds of .44 rimfire during the battle, helping fend off more than 1,000 Native Americans until reinforcements arrived. Crazy Horse participated in the battle and learned from his defeat, and by 1876 many Lakota Warriors were better armed than Custer’s men.

The Gun that Won the West

Only 132 One of One Thousand Winchester 1873 Model rifles were ever produced, making for a truly unique and desirable firearm. After Lin wins the shooting competition, the prized Winchester changes hands eight times throughout the movie, and the spotlight always stays on the film’s true star, the Winchester 73 rifle. 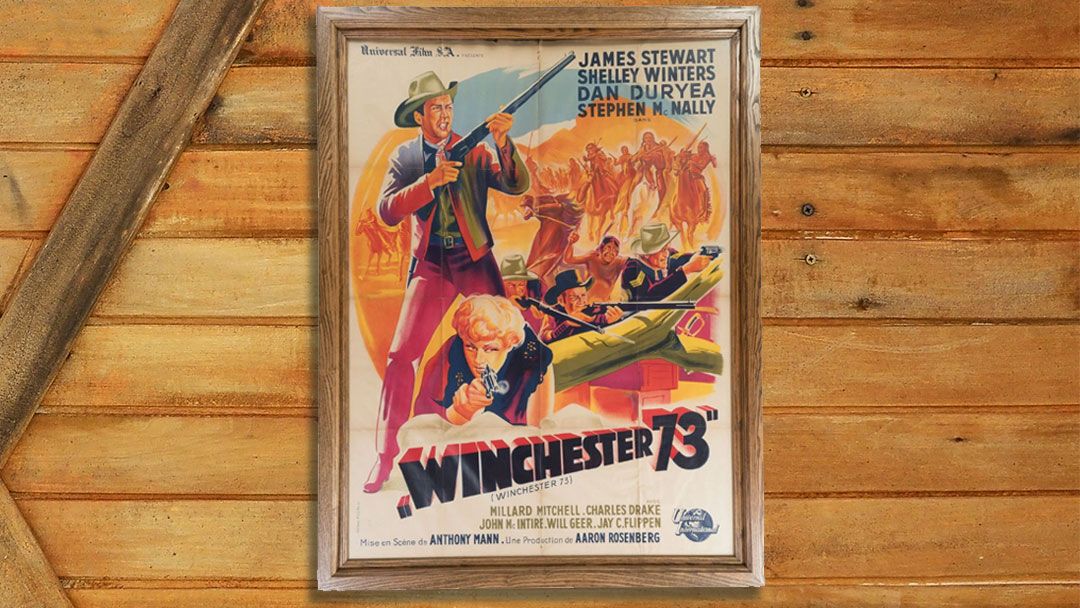 A “Winchester ’73” poster featuring James Stewart and Shelley Winters. The poster is approximately the size of those featured in cinema lobbies.

Even the final scene in Winchester ’73, a classic embrace between hero and leading lady, is punctuated by the presence of the famous firearm. As James Stewart clutches Shelley Winters in one arm, he gazes down at his treasured rifle as the camera zooms into the plate on the buttstock, the music swells to a crescendo, and the credits roll. Love can be fleeting, but a good Winchester is forever.

In 1950, the Winchester ’73 movie helped elevate its iconic namesake to one of the most sought-after collector guns in the world, and that trend continues as interest in historic arms collecting is hotter than ever at Rock Island Auction Company. Gun collecting and pop culture have always gone hand in hand, so subscribe to the weekly Rock Island Auction newsletter to receive new gun blogs and gun videos every week. From articles on the Old West guns of 1883, True Grit, and Quigley Down Under, to modern hits like the Walking Dead, Yellowstone, and Star Wars, we explore the most popular and intriguing guns of Hollywood. 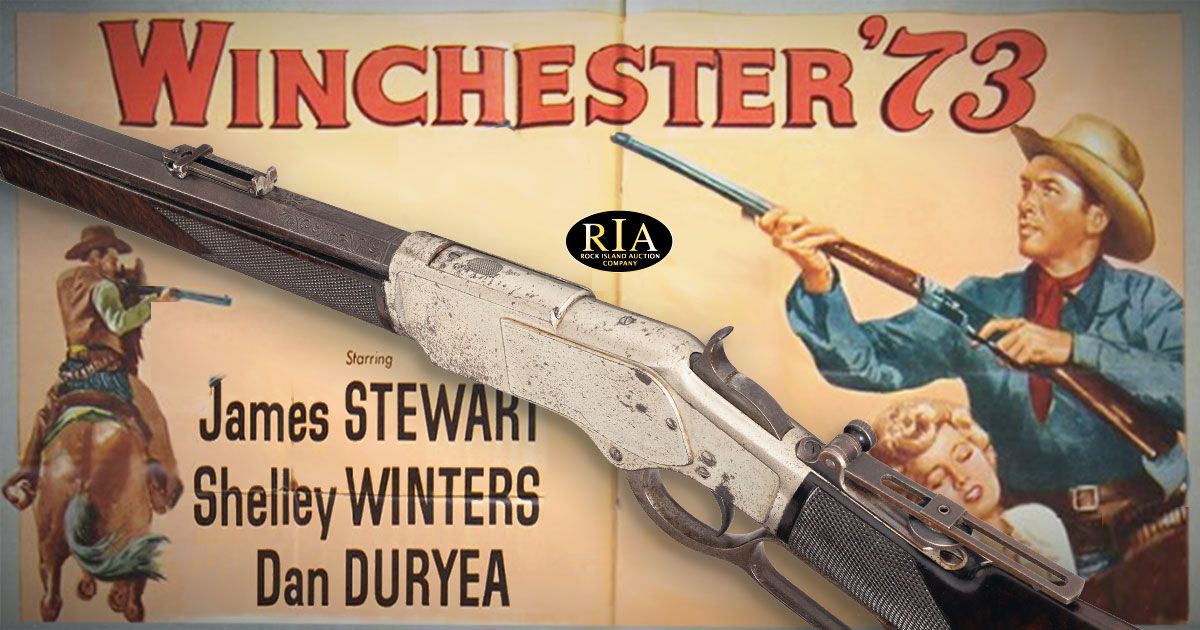