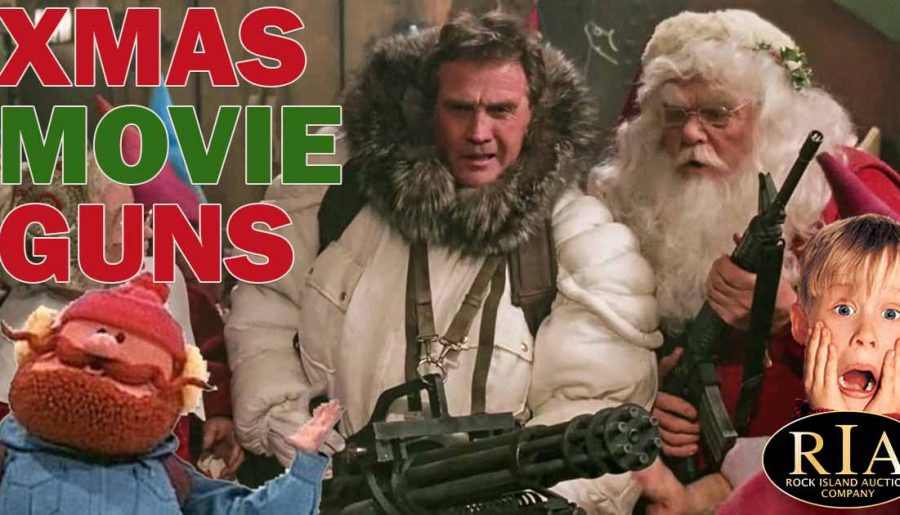 From Ralphie’s air rifle in “A Christmas Story” to M1 Garands in a “White Christmas” to a Minigun in “Scrooged,” firearms are a holiday movie tradition. That’s not even counting films like “Die Hard” or “Lethal Weapon” that may or may not be Christmas movies but are at least set at the holidays.

Even Yukon Cornelius who helped Rudolph the Red Nosed Reindeer and Hermey and tamed the Abominable Snowmonster — or “Bumble” — carried a sidearm. 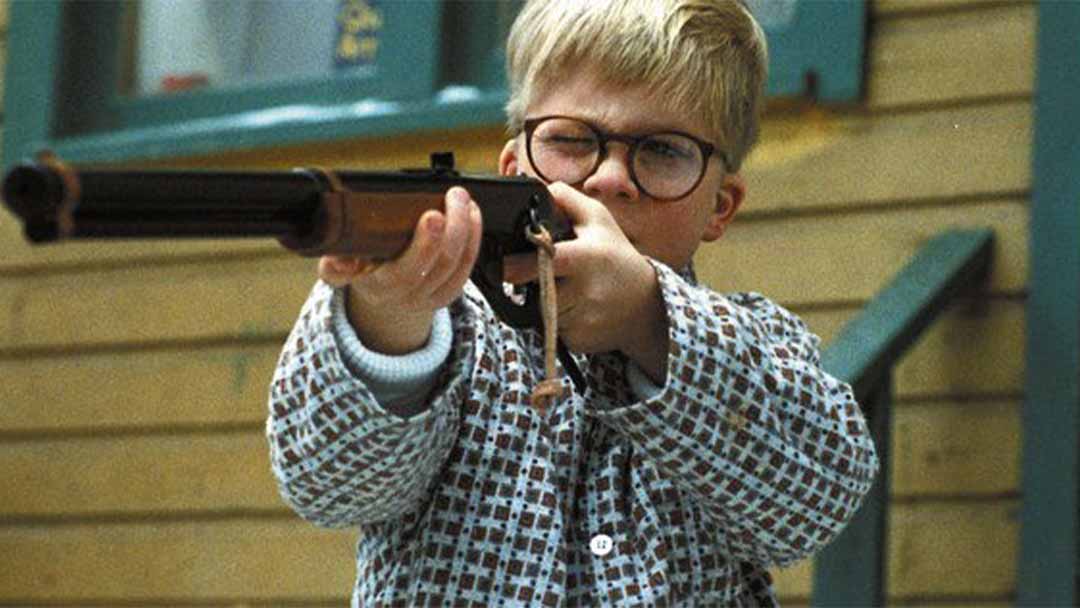 Everyone worried that Ralphie would shoot his eye out with a Red Ryder air rifle, but by the end of “A Christmas Story” Ralphie nods off to sleep with his beloved BB gun beside him, dreaming of “pranging ducks on the wing and getting off spectacular hip shots.”

In “A Christmas Story,” Ralphie writes an essay about why he wants “an Official Red Ryder, carbine action 200 shot, range model air rifle with a compass in the stock and this thing that tells time.” He asks Santa for it. He asks his parents for it. At every turn he is admonished with the warning “You’ll shoot your eye out.”

Ralphie calls the air rifle, “as cool and deadly a piece of weaponry as I had ever laid eyes on.” The BB gun in the film is named after a comic strip cowboy that was popular with boys after his introduction in 1938. Daisy saw a marketing opportunity and in a promotional agreement started selling the Red Ryder BB gun in 1940.

In the end, the Old Man tells Ralphie he missed a gift tucked behind a desk. Unwrapping the gift, he finds his beloved Red Ryder air rifle and heads out to the backyard where his first shot ricochets and hits his glasses.

He makes up a story about an icicle hitting him. He wears his old glasses and the family enjoys Chinese turkey for dinner. That night, he goes to sleep with his “oiled blue steel beauty,” dreaming of “pranging ducks on the wing and getting off spectacular hip shots.”

By the end of the 1940s, Daisy was selling more than 1 million Red Ryder BB guns annually. The air rifle Ralphie received, with all its embellishments, never truly existed, as it was combined with the Buck Jones Special that had a compass and a sundial. Six were made for the movie. One is on display at the “A Christmas Story” House and Museum.

Another air rifle that is less iconic but equally important to its Christmas movie is the pump action BB gun Kevin McCallister uses in “Home Alone” against Harry and Marv, “the Wet Bandits” who’ve been breaking into vacant houses in his suburban Chicago neighborhood. 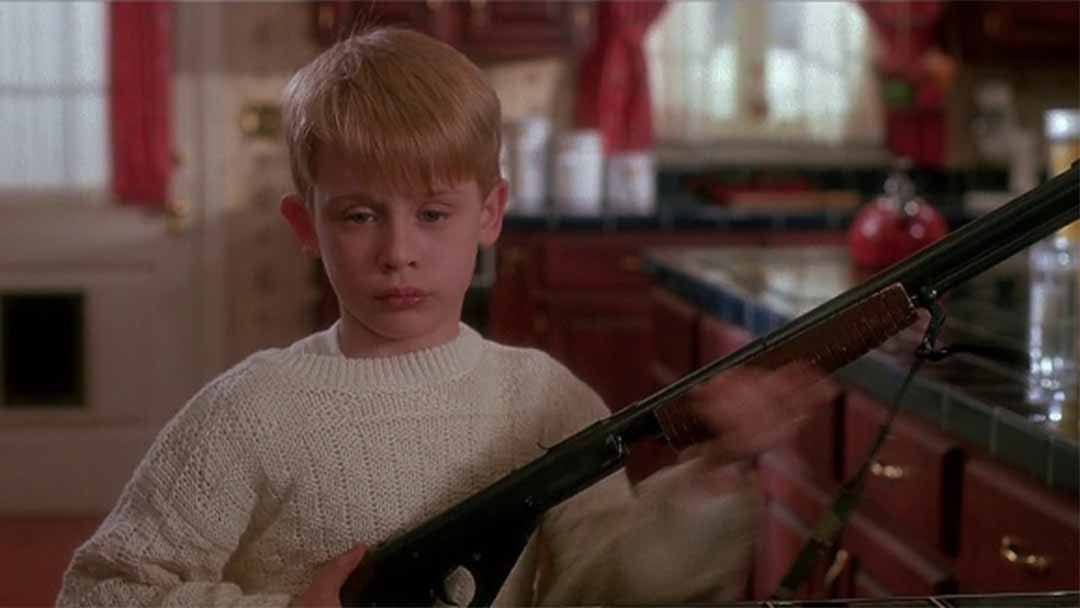 Kevin McCallister was more than a match for Harry and Marv with his air rifle in “Home Alone.”

The Beretta 92F may be the most ubiquitous of Christmas movie guns. John McClane ruins Hans Gruber’s Christmas party with one, and mulleted Martin Riggs puts down three bad guys in a Christmas tree lot with his Beretta.

It seems like every police officer or criminal in movies made after 1986 and set around Christmas has a Beretta 92 in hand. There are 23 iterations of the gun since production began in 1975 with the 92FS the most movie friendly.  “Die Hard” had Beretta wielding baddies as well as its barefoot hero.

Cops carried them in “Jingle All the Way,” and bad guys dished out mayhem with them in “The Long Kiss Good Night” and “Reindeer Games.” Sgt. Al Powell eschewed his Smith & Wesson Model 15 for a Beretta 92FS in Die Hard 2. The Beretta 92 also appears in less well-known Christmas-related movies “Fatman,” “Kiss Kiss Bang Bang,” “In Bruges,” and “Harold & Kumar 3D Christmas.”

Police officers with guns aplenty burst in on the Griswald family gathering in “National Lampoon’s Christmas Vacation,” but this department didn’t get the memo because they arrive armed with Tauruses, Colts, and M16A2s. 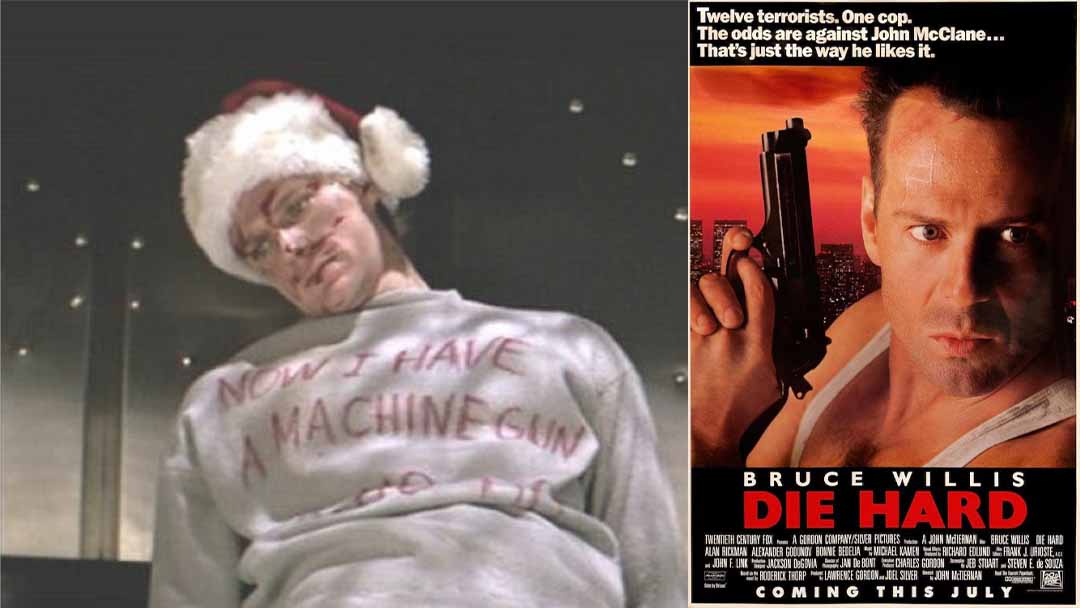 Whether or not “Die Hard” is a Christmas movie is debatable, but there’s no argument the Beretta 92FS used by John McClane is definitely one of the top Christmas movie guns.

In the show within the movie, terrorists attack Santa’s Workshop. As the elves run for their armory, “the Six Million Dollar Man,” Lee Majors arrives at the workshop by snowmobile armed with a General Electric M134 Minigun. Santa is carrying an M16 and a couple of elves are manning (elfing?) an M60 machine gun.

How unrealistic! No, not Santa’s workshop, nor elves strapped for battle, but an action hero toting a Minigun. Despite portrayals like Old Painless wielded by Jesse Ventura in “Predator,” Arnold Schwarzenegger’s Terminator and Lee Majors, the Minigun is essentially a modern-day Gatling gun. The Minigun requires an outside electric source and a truckload of ammunition to fire 2,000 to 6,000 rounds per minute through the six rotating barrels.

Elves taking up a defensive position with an M60 is far more realistic since “the pig” is an imposing weapon that can throw plenty of lead at marauding North Pole terrorists. 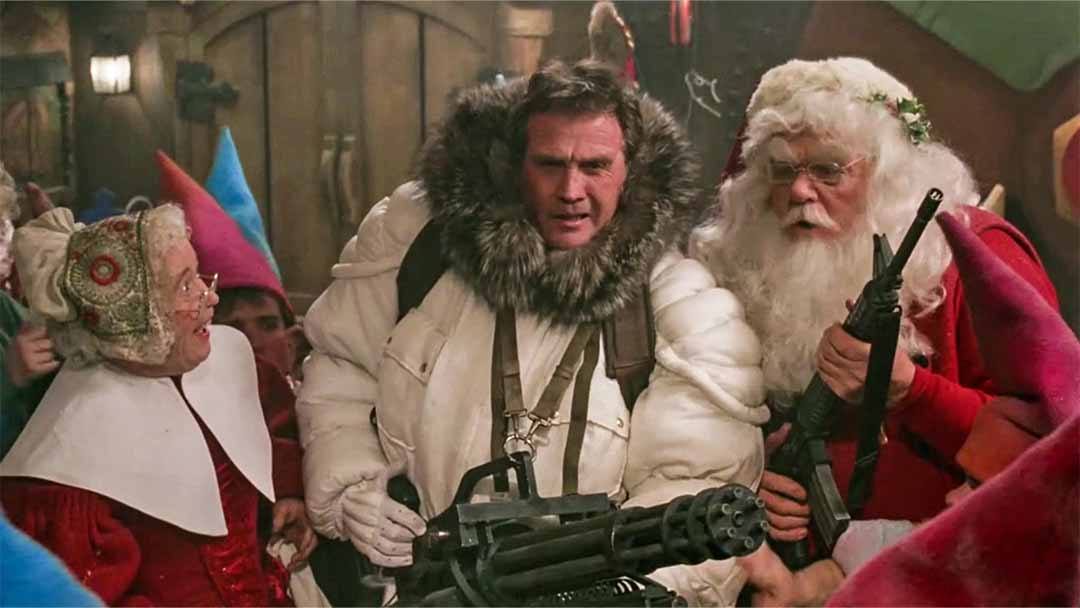 At the start of “White Christmas,” Bing Crosby and Danny Kaye become a singing duo after a Christmas performance during the war. The soldiers, as they watch the performance, carry M1 Garands, M1 Carbines, and an occasional M1903 Springfield.

George Bailey never went to war in “It’s a Wonderful Life” because of his bad ear, but his brother, Harry, did. The only person we see fight in the war is Bert the Cop in North Africa carrying his M1903 Springfield. Bert also squeezes off a few shots from his Smith & Wesson Model 10 to scare off George who is harassing his wife Mary who doesn’t recognize him.

“It’s a Wonderful Life” director Frank Capra served in the U.S. Army during World War 2 in the Signal Corps, making propaganda films. His “Why We Fight” series was made at the request of Gen. George Marshall, the U.S. Army Chief of Staff. 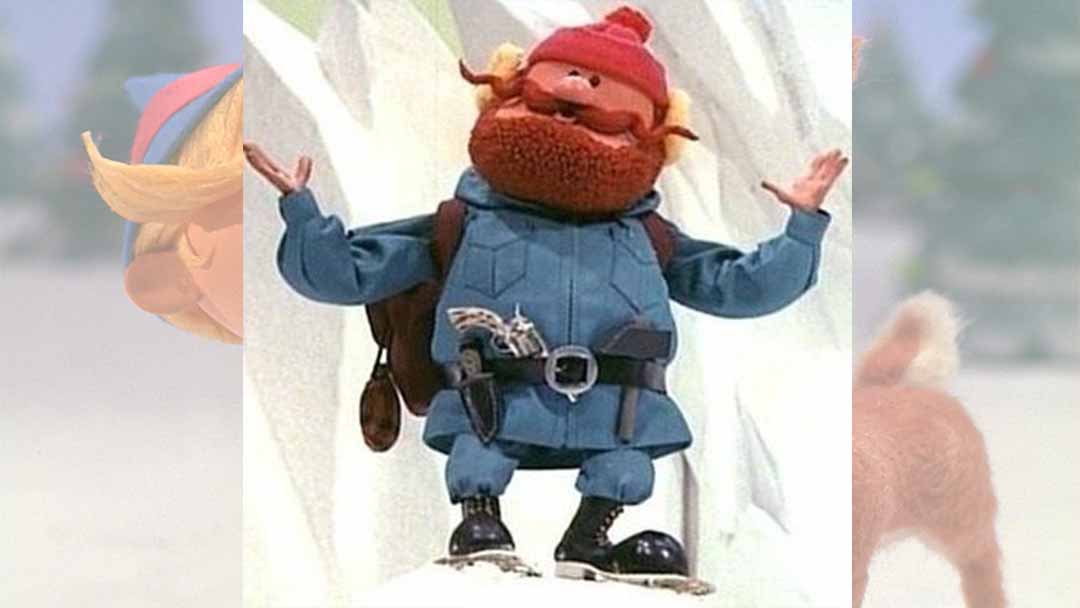 Yukon Cornelius is ready for adventure in the northern wilds, with a knife, prospector’s hammer and yes, a nickel-plated Colt Single Action Army with staghorn grips in his belt.

Yukon Cornelius is a man of the ice and snow. He is a prospector leading his rag-tag sled dog team of a cocker spaniel, poodle, Saint Bernard, collie, and a dachshund. While Rudolph the Red-Nosed Reindeer and Hermey the Elf run away from the North Pole unprepared, not so with Yukon Cornelius. The red-capped rescuer is ready if things go sideways, outfitted with a fixed blade knife, impact tool, and most importantly, a revolver.

The gun, which stays in his belt during the beloved Christmas special, even while tangling with the Bumble, appears to be a nickel-plated Colt Single Action Army with staghorn grips. Even Yukon Cornelius loves a classic wheel gun.

Whether settling down with a cup of egg nog to watch the yule tide action of “Die Hard,” the snowy shenanigans of “National Lampoon’s Christmas Vacation,” or the more traditional “It’s a Wonderful Life,” Christmas movie guns abound. Hopefully the plinkers, hunters, and collectors have been as good as Lee Majors this year and get what they wanted under the Christmas tree!

“A Christmas Story” House and Museum

The Guns of Rudolph the Red-Nosed Reindeer 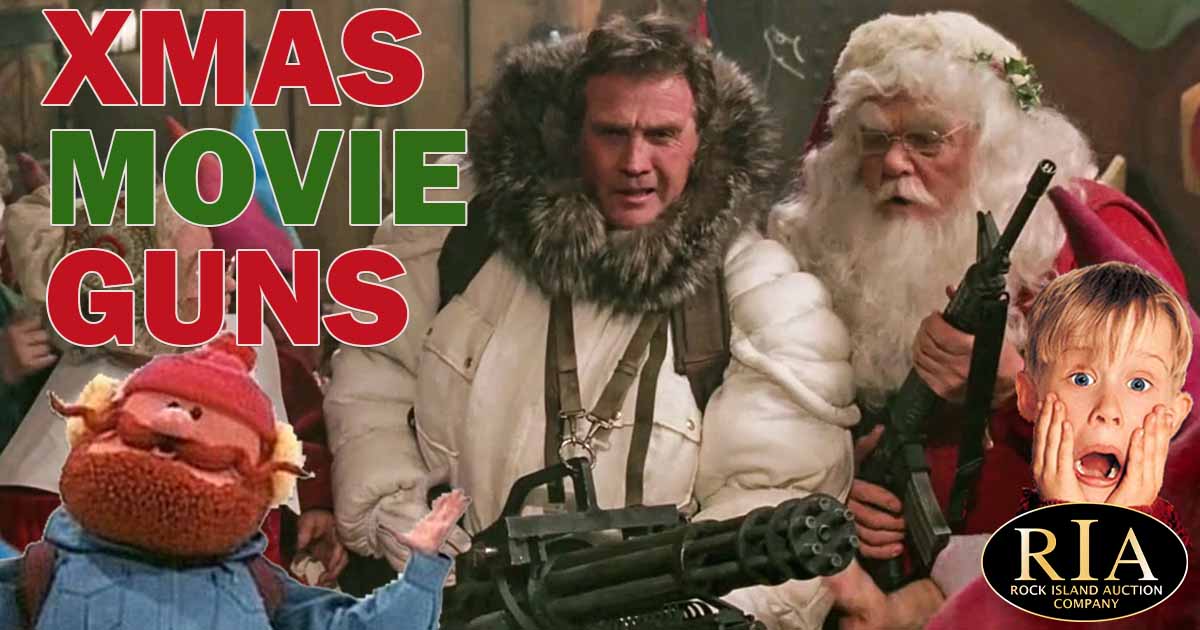